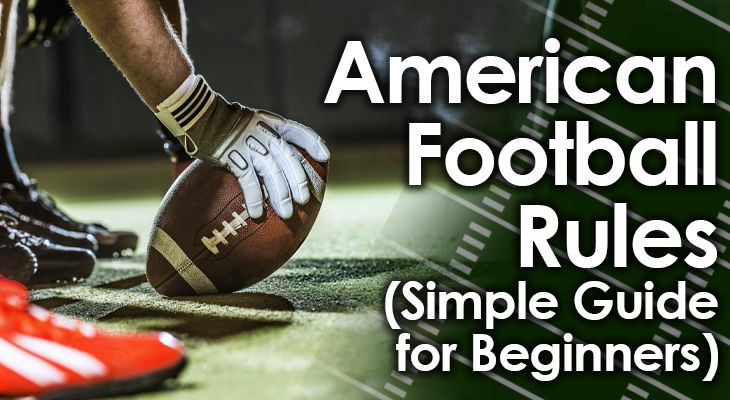 If you're new to the game, American football rules can seem quite complicated.

After all, there are many rules and it's a fast-moving game with many players.

At its core, though, American football is quite simple.

One of the benefits to learning the sport is that while it's fast-paced, play happens in short spurts with frequent stoppages, and this format makes it easy to follow along once you understand the basic rules of football.

This will provide you with a basis to understand how American football is played, and what the players, referees, and coaches are doing on the field.

The easiest way to understand the sport of American football is to break down various aspects of the game.

There are rules that determine how many players are on the field at one time, how long the game lasts, where teams take stoppages and breaks, and more.

We have broken down each of the main rules into separate sections so that you can follow along in an easier way.

This will allow you to understand how each individual aspect of the sport comes together to make up one cohesive game. 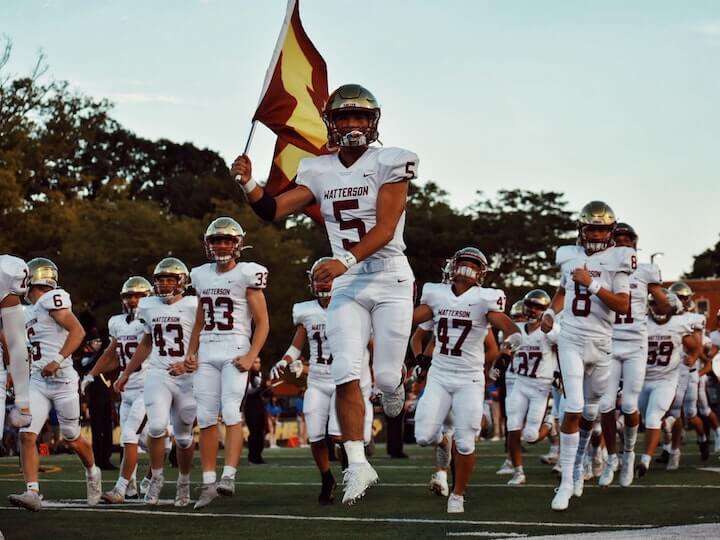 Based on the rules of football, each team will have 11 players on the field.

This means there will be a total of 22 players on the field for every play.

This is the rule whether one team is on offense and the other defense, or whether it's a special teams play such as a punt, kickoff, or field goal attempt.

Let's talk a little more about the three main "units" on a football team, which are the offense, the defense, and the special teams.

The offense is the unit that's responsible for trying to score points for their team.

They will do this by running or passing the football down the field.

The 11 players on offense typically consist of:

Coaches do have the option to change out some of these players for different positions depending on the package they want to call.

The final five players (running back, tight end, and wide receivers) can be switched out for each other.

What combination the coach chooses depends on the play they want to call.

The defense's job is to prevent the offense from scoring points.

They do this by tackling players who are carrying the football and forcing them to either commit a turnover (a fumble, interception, or turnover on downs) or punt the ball away.

The 11 players on defense will typically be a combination of:

Defensive coaches have similar options when it comes to which combination of players they want on the field for a particular play.

A "base" defense might consist of four defensive linemen, three linebackers, two cornerbacks, and two safeties.

The coach can choose to sub out some of those players, though.

The most common "subs" are going with three defensive linemen and four linebackers, but keeping the secondary (the cornerbacks and safeties) the same.

They also may sub out a linebacker for an extra cornerback as well.

Special teams are responsible for the kicking game.

This includes place kick attempts that try to score points and punts that give the ball to the other team after the offense failed to get a first down.

The four times teams use their special teams include:

When one unit is on the kickoff, the other team's kick return team will be on the field. The same goes for each of the other three combinations. 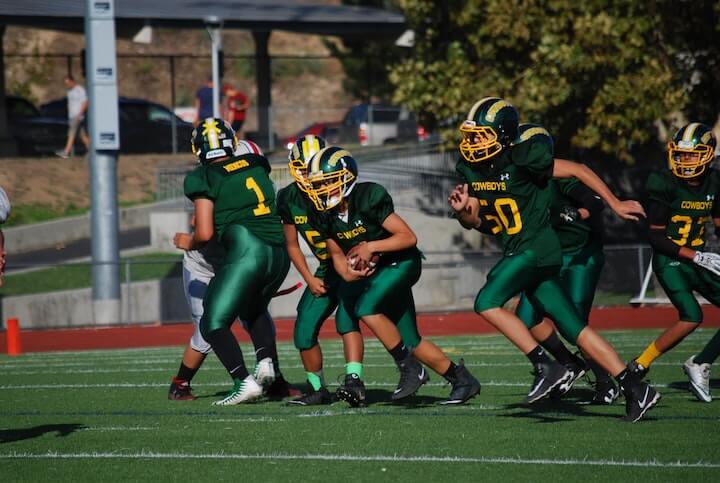 The format of an American football game will vary slightly at each level.

The higher you go in experience, the longer the games will be.

The length of each quarter will vary depending on the level of football.

In the National Football League (the highest professional league in the world) as well as college football, the four quarters are 15 minutes each.

There is a short pause in between the first and second quarters, and the third and fourth quarters.

Half time will occur between the second and third quarters. This will be a much longer break -- at least 12 minutes but sometimes as much as 20 minutes.

Each American football game begins with a coin toss.

The winner of the toss decides whether they want to receive (go on offense first), defend (go on defense first), or defer (let the other team choose).

The team that is going to be on defense first will have its kickoff team on the field.

The place kicker will kick the ball to the kick return team, who will have a player receive the ball and try to run it down the field.

After he gets tackled or forced out of bounds, the offense will take over and the other team's defense will come onto the field, too.

After each score, there will be a kickoff in the same way.

At the start of the second half, the team that kicked off at the beginning of the game will now receive the kickoff from the other team.

Every time the offense is on the field, they start by getting what's known as a "set of downs" -- labeled, first, second, third, and fourth down.

When the offense starts with the ball, they will be on first down, and they will need to gain at least 10 yards over the next four plays.

If they don't, the defensive team will have successfully made a stop, and their offense will take over at that point on the field.

If the offense is able to gain those 10 yards, they will get a new set of "downs" to keep trying to proceed down the field.

The play starts at 1st-and-10, and the offense manages to gain 5 yards on their first attempt.

The next play will be start at 1st-and-10 again.

If the offense gets to a third down, they have a choice to make...

They can either try to gain the necessary yardage to get a first down on fourth down, or they can punt the ball away.

The risk if they decide to go for it is they could turn the ball over to the defense, whose offense would take over at that spot on the field.

If they punt the ball, they get a chance to kick it downfield to the other team, making their offense start further back.

Many offensive coaches will choose to punt if they have the ball deep in their own end of the field, or if they have a long way to go to get a first down.

The last option would be to attempt a field goal to score some points.

Teams can only do this if the offense is deep enough on the defense's side of the field that the place kicker would have a realistic chance to convert the kick. 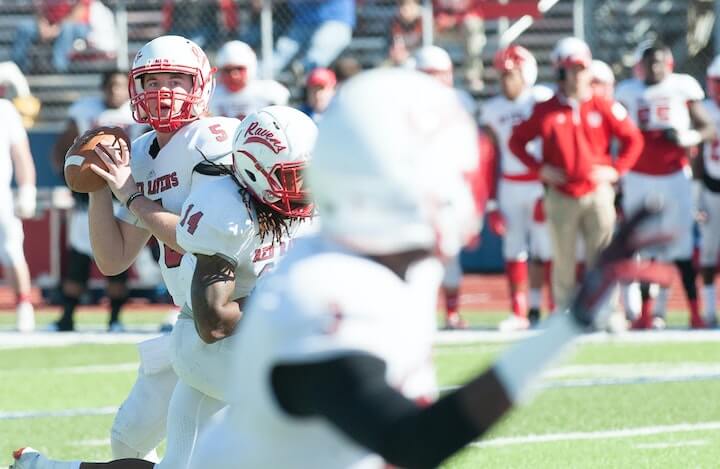 Those are the rules of how offenses can proceed downfield, but how do teams actually make that happen?

There are two ways offenses can legally move the ball downfield.

This involves the offense running the ball forward to gain as much yardage as possible before getting tackled or forced out of bounds.

This usually sees the quarterback handing the ball off to one of his players (usually a running back, but also potentially a wide receiver), who will then try to gain as much yardage as he can.

In some instances, especially in the professional level, you'll also see the quarterback himself run the ball.

This involves the quarterback dropping back with the ball and completing a forward pass to one of his eligible receivers.

The play ends when the defense either tackles the player with the ball (i.e. brings him physically to the ground) or when the ball carrier runs out of bounds.

Turnovers are a part of the game as well, and can happen on any given play.

As long as there aren't any penalties that go against the rules of football as these turnovers occur, the defense will essentially become the offensive team as they win possession of the ball.

A form of turnover in the game is what's known as an interception and it happens when a defensive player catches a forward pass attempt from the quarterback.

Another turnover is the fumble. These happen when an offensive player drops the ball (or has it knocked out of his hands) and the defense picks it up or lands on it before it goes out of bounds.

Whenever a turnover occurs, the defensive team's offense will come onto the field and take over with a new set of downs at that point on the field.

Scoring is the name of the game in American football.

After all, a game is decided by whichever team has scored more points when the clock strikes zero in the fourth quarter.

There are three ways the points are scored in American football:

Let's briefly break down each of these types of scoring plays 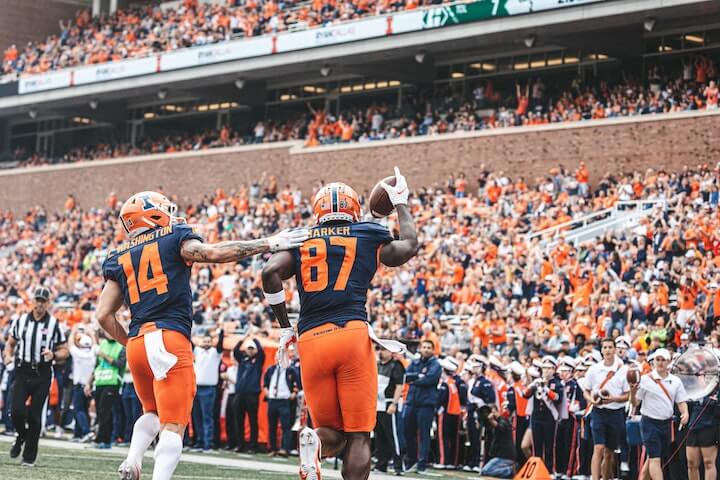 Touchdowns occur any time a player carries the ball across the opposing team's goal line. This can happen in a few different ways:

No matter how a team scores a touchdown, they will gain 6 points.

Following every touchdown, the team will have another chance to score again.

Also known as the Point After Attempt (or PAT), teams have two options after every touchdown…

The team scoring the touchdown can attempt a place kick (that's like a field goal).

If the kicker successfully kicks the ball through the uprights, the offense will score 1 additional point.

The coach could decide to keep the offense on the field and try to push the ball across the goal line again.

They will get one untimed down from the two-yard line.

If they are able to successfully cross the goal line on that play, they'll score 2 additional points. 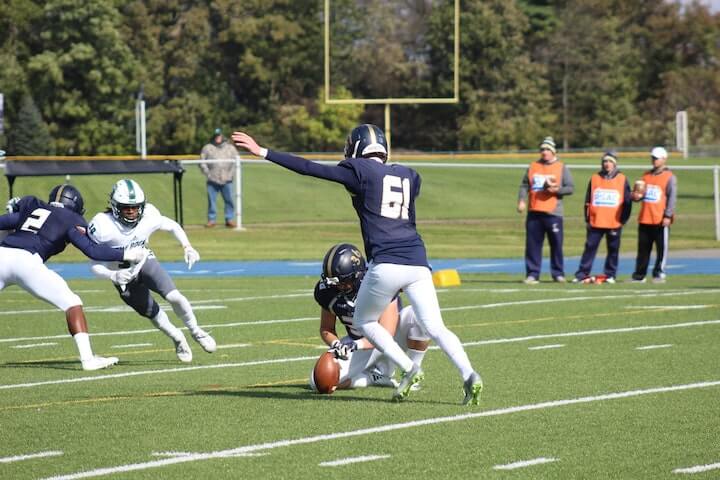 Field Goals are the exact same play as an Extra Point.

They require the place kicker to kick the ball through the uprights, which stand at the back of the end zone.

They are most often attempted on fourth down, when the offense is unable to convert a first down, but can be attempted at any point by the offensive team.

No matter how long the field goal is, the team will score 3 points if they are successful.

The defense can score points for their team through a safety as well.

This happens whenever they are able to tackle an offensive player in their own end zone. When this happens, the defensive team will gets awarded 2 points.

The unit of measurement used in American football is in yards.

The size of the field is the same no matter what level of the game you're watching.

This is a little different from some other sports, which start with a smaller field and then increase the size as players climb up the experience ladder.

Most fields will be lined from sideline to sideline every 10 yards.

The two goal lines are 100 yards away from each other, and the field is split in the middle at the 50-yard line.

Each line from the 50-yard line toward an end zone will be in descending order.

The end zones are each 10 yards wide.

American football rules can be complicated, but the game will quickly become easy to understand with a few hours of watching and studying the game.

We've broken down the main rules of football above so that you can get started understanding how American football works.

Spend a little time studying the rules above and you'll be able to understand the game better as you watch it.