How to Punt a Football with Pinpoint Accuracy (5-Step Guide) 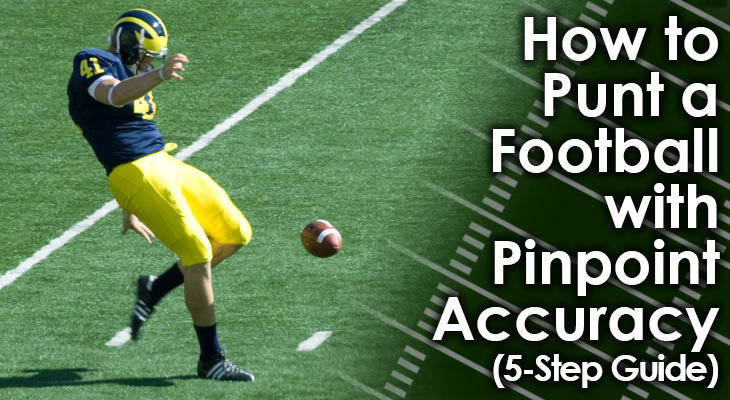 No football team likes to stall and not make a first down.

No football team likes to have to punt the football away to the other team.

However, punting a football is one of the most important (yet over-overlooked) parts of the game that can swing the score one way or the other.

But before we get into the how…

Let’s talk about why teams choose to punt in the first place.

Why Do Teams Punt the Football?

​When an offense isn’t able to make a first down, score a touchdown, or kick a field goal…

The team must decide whether it wants to take a chance and try to convert on fourth down, or whether they’ll punt the football away to the opposing team.

In cases where the offense is facing a longer distance to gain a first down, such as fourth-and-seven, the smart move that most teams opt for is to punt the football away. 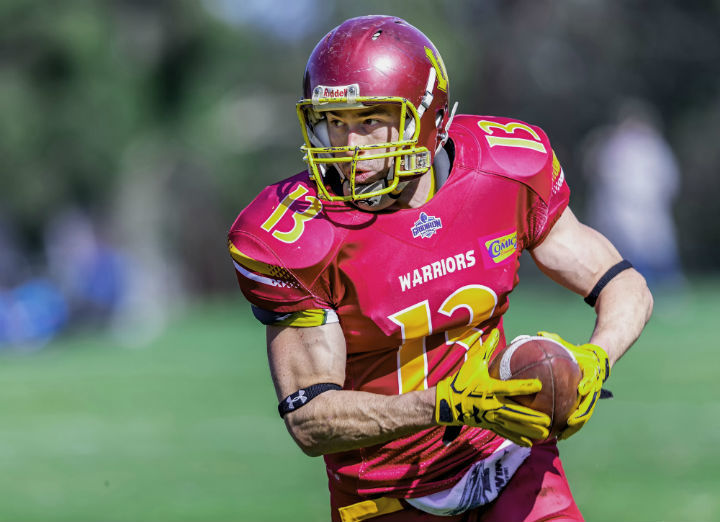 When and Where Should Teams Punt the Football?

​Punting isn’t as simple as kicking the ball as hard as you can as far as you can, though.

The idea is to place the football as close to the opponent’s own end zone as possible without kicking it into the end zone.

As that would result in what’s called a “touchback”, where the offense would then take over on its own 20-yard line.

Exactly how this is accomplished depends on where the offense is located on the field.

If the offense stalls deep in its own territory, say on its own 20-yard line, then the job of the punter will be to kick the ball as far as possible with as much hang time as possible.

The hang time allows the punt coverage to run down field and tackle the other team’s returner.

If the offense stalls around the 50-yard line, though, a team with a good punter may either opt to kick the ball out of bounds as close to the end zone as possible...

Or they may even kick the ball as high as possible within the field’s boundary to force the returner to call for a fair catch, which would down the ball at the spot he catches it.

No matter what type of punt is required for a specific situation – either a booming, long punt or a high, shorter punt – the techniques utilized are very similar.

By following these 5 easy steps, you’ll be punting a football with the exact power and accuracy that you need very quickly.

How to Punt a Football in 5 Steps

The punter lines up about 15 yards behind the center on a punt play.

When play begins when the center snaps the ball back to the punter.

The first step in punting a football, then, is to catch it.

If the football is snapped directly back to you, catch it by holding your hands straight out in front.

The saying is “go get the football and don’t wait for it to come to you”.

What this means is you want to catch the football out in front of you and not let it get too close to your body, since you’ll need to next position the ball properly to kick it.

If the snap is a little high, low, or off to one of the sides, you should adjust your body accordingly to make sure you receive the football.

The best way to do this is to shuffle your legs from side to side while keeping your body as square to the field as possible. 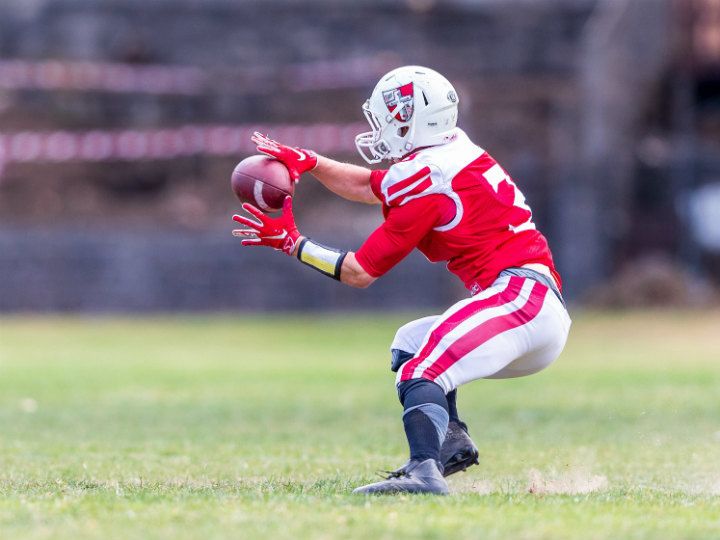 Once you catch the football, you should position the ball out in front of you with the laces pointing upwards.

Grip the ball with your dominant hand as if you were giving it a handshake, holding it between your thumb and fingers.

Stretch your arms out as far as you can and hold the ball horizontally in front of you.

Finally, angle the ball so that it points slightly away from your dominant hand.

Now that you’ve caught the ball and have it positioned in your hands properly, it’s time to start moving forward with the bottom half of your body.

Your feet should begin about a foot apart from each other, with both feet facing straight forward down field and your body square.

Then you need to take two steps forward.

This will help you gain some momentum and build power before you actually kick the ball.

The steps shouldn’t be a slow walk or a fast run, but rather quick, smooth, and controlled steps forward. Taking too small or too long steps will also make it more difficult to punt the football.

Step #4 – Drop and Kick the Football

As you’re taking the two steps forward, you should be keeping the ball stretched out in your hand parallel to the ground.

The next step in punting is actually kicking the football.

In the same motion, your kicking leg should kick forward and your hand should drop the ball.

The idea is to kick the ball at the highest point possible, relative to your hand.

Make sure you don’t drop the football too far out in front of your hand. Instead, you should almost kick the ball directly out of your fingers.

Your leg should be kicked straight up so that it’s able to make contact with the football dead on.

Don’t kick the ball across your body, as this will reduce the power on your kick and cause it to go toward the sideline.

Kick the ball with the top of your foot, with your toes should be pointed forward when you do so.

When you drop the football out of your hand, your dominant hand should drop to the side of your body, while your other arm should be lifted into the air to help your follow through and momentum.

A follow through is equally as important with a punt as it is with a throw of a football.

Once your foot makes contact with the football, you should not stop your leg and body dead in its tracks. Instead, you should continue the kicking motion all the way through to give the punt its maximum power and accuracy.

For a punt, you should finish the kicking motion by allowing your kicking leg to go as high as it will go in the air.

Once your leg completes the kick, you should plant it down on the ground out in front of your body, and allow your body’s momentum to help you travel forward. 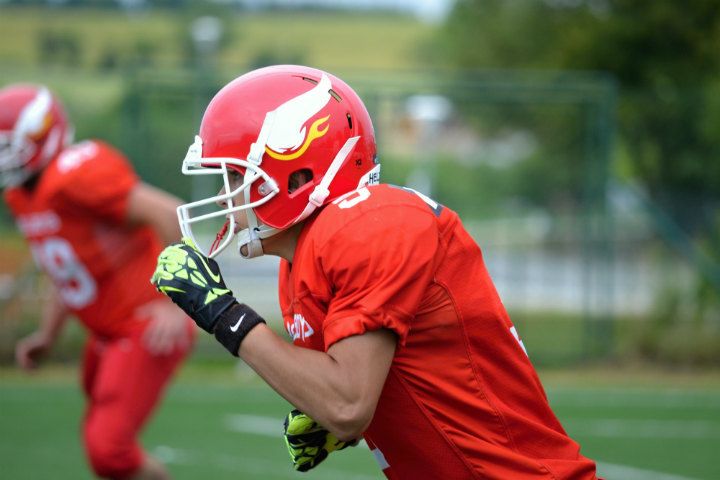 Mistake to Avoid #1 – Taking Your Eyes Off the Ball

You may have heard the phrase “keep your eye on the ball” before.

It’s a common phrase that baseball coaches use, and one that applies to players who catch a football at any position.

One of the keys to catching a football is to focus your eyes on the ball the entire way as it travels into your hands.

If you watch football on TV, you may see a receiver drop a football every once in a while and hear the announcer say something along the lines of…

“He was looking downfield and forgot to catch the ball.”

That’s what we’re talking about here.

You can’t punt the football if you don’t catch it, so make sure that you carefully watch the ball into your hands first before worrying about kicking it downfield.

Once you’ve caught the football, you must position it correctly.

The most common mistake punters make here is they don’t rotate the ball properly so that the laces are pointing up toward the sky.

The laces were put on a football to help quarterbacks grip the ball.

The underside of the ball was left without laces so you could kick it from that side.

Kicking a ball on the laces will significantly reduce the power of your kick, and it will also cause the ball to react in strange ways once it’s up in the air.

So do yourself a favor and make sure the laces are always pointing up.

Mistake to Avoid #3 – Shuffling Your Feet

Some punters might shuffle their feet when they step forward, but this is a big mistake.

Short, quick steps (or slow long strides) won’t give you enough momentum to get off a good, powerful punt.

Mistake to Avoid #4 – Dropping the Ball to Your Foot

This might be the most common mistake people make when they are punting a football.

The natural thought is that if I’m kicking the football, then I must need to get it down to my foot as quickly as possible so that I don’t take more time than I need to get the kick off.

That thinking is completely contrary to what you should do when you’re punting.

It might seem odd that you want your leg to lift up and almost “grab” the football out of your hand, but doing so (and not dropping the ball to your foot) is essential if you want to get enough power behind your kick.

The only way to do that is if your leg kicks up first and then makes contact with the football close to where you are holding it in your hand.

Also, when you drop the football, it is harder to predict exactly where it’s going to go.

You may drop it and then miss when you try to kick it.

Or, the ball may turn a certain way when you drop it, causing you to kick it off the side of your foot or with the ball facing sideways.

Having your foot meet the ball near your hand is the only way to ensure that you get enough power behind your kick and that the ball is positioned properly the entire way through the kick.

Mistake to Avoid #5 – Stopping After the Kick

This is perhaps the next most common mistake.

Following through not only makes the punt more powerful, it makes it more accurate as well.

Stopping your kicking motion when you make contact with the ball will cause it to not have as much power behind it, and it will also cause the ball to act in unpredictable ways.

Remember that even if you’re trying to angle a shorter punt, you still need significant power behind it so that the ball can travel through the air with ease.

This is especially true in windy conditions.

So make sure you complete your kicking motion all the way through.

Punting might not be the most popular part of a football game, but it is one of the most important parts.

Pinning the opposing offense as deep as possible on the field will help your defense do its job and can ultimately lead to your offense having great field position the next time it takes the field.