What are Special Teams in Football? (Explained) 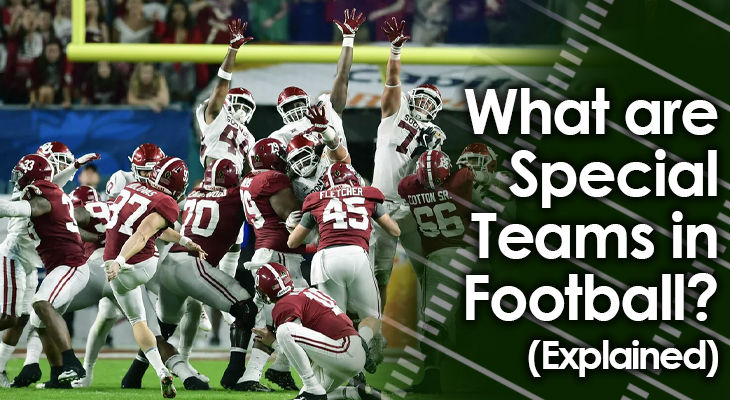 What’s so special about special teams in football?

When most people think of football teams, they think of only two units — the offense and the defense.

But special teams is that often-forgotten third unit that can have a huge impact on the game.

Special teams is defined as any unit that is responsible for plays on the field that revolve around the kicking game — whether your team is attempting a kick, returning a kick, or defending a kick.

In total, special teams units are only on the field for roughly 20% of the game in most games, but they play a huge role in the outcome.

In most seasons in the National Football League, special teams accounts for roughly 35% of all points scored in a season. Sure, offenses have a much greater role in the actual point production, but keep in mind that special teams plays a role in how offenses (and defenses) perform.

Where teams start drives from on the field is reliant completely on special teams.

There are four main areas of the game where special teams are involved, and two units involved in each area.

In professional leagues and even with most collegiate teams, special teams units are made up of players who aren’t prominent parts of the offense or defensive units.

However, in youth football — which often has smaller rosters — the same players who are playing on offense and/or defense are also taking the field for special teams plays.

Let’s take a more in-depth look at each of these areas of the game to see just how important the role of special teams is. Kickoffs are how every football game begins.

One team will kick the ball from a stationary tee to the other team, who will try to return it as far down the field as possible.

Kickoffs also occur after every point scored to reset the field, as well as at the start of the second half and overtime — if extra time is needed to decide a winner.

The kicking team is made up of one kicker and 10 other players who are tasked with running down field to cover the kick and tackle the player who catches the ball.

Depending on the level of the sport, the kicker will place the ball on a tee on his side of the field, around the 35-yard line.

The kicker will often start by lining up roughly 15 yards behind where the ball is placed so he can get a good running start and a lot of momentum behind his kick.

The idea, of course, is for him to kick it as far down the field as possible to either get a touchback — if the ball lands out of the other end zone, or if the other team kneels it in the end zone — of allow the coverage team time to run down field.

The rest of the players on the kicking team will line up roughly 10 yards behind the ball so that they, too, can get a running start.

These players will be lined up across the field from sideline to sideline so they can cover the entire field.

The ball acts as the line of scrimmage for kickoffs, so no player can cross that line until the ball has been kicked.

The receiving team often has their players line up in three distinct levels.

The bigger players — sometimes offensive linemen, sometimes tight ends — will line up about 10 yards off the ball.

These five players will line up with two on each side of the hash marks and one in the middle of the field. Their job is to block players as they run toward them and also watch out for a surprise onside kick.

The next level of four players will line up about 20 yards behind the first line. They are a little more mobile and agile players, but their primary duties will also be to block.

When the ball is kicked, their first steps will be back, and they’ll look to be the lead blockers for the ball carriers.

The final two players will line up deep downfield. Where they line up exactly will depend on how good the kicker is.

These are your fast players — the wide receivers and running backs.

One player will catch the ball, depending on where it’s kicked, and the other will serve as another blocker for the ball carrier.

Punts occur most often on fourth down, after the offense fails to convert a first down.

Instead of going for it on fourth down to try to get the first down, the team instead will call out the punt team to give the ball to the other team.

A punt can happen from anywhere on the field, but most of the time, it occurs from the 50-yard line and back toward the offense team’s zone.

A punt will look more like a regular play than a kickoff, at least in terms of how the players line up.

The punting team will have seven players at the line of scrimmage.

The center (or long snapper) will line up over the ball, with a guard and tackle on each side two yards apart.

The other two players on the line of scrimmage will spread out a little more, about three yards out.

All these players except the long snapper will be in a two-point stance with their hands on their hips, instead of a traditional three-point stance.

The punter will line up about 15 yards behind the long snapper.

The long snapper will snap the ball to the punter, who will catch it, set his feet, take one step forward and then punt the ball down the field.

The goal is for the punter to either kick the ball as far as possible or angle the ball toward one of the sidelines.

The punt return team on the opposite side of the field will line up a little differently than a normal defensive alignment.

One linemen will line up directly opposite the long snapper.

Then, three players on each side of the long snapper will line up stacked close to each other over the guards and tackles.

Two cornerbacks will line up across from the outside protectors, while the returner will line up deep to catch the kick.

At the snap, if the return team has called a protection play, each player will be responsible for picking up a player on the other team and blocking him.

The outside players will make their first steps back, toward where the returner is.

If a punt block has been called, some of these players will try to rush through the line of scrimmage to get to the punter before he can kick the ball away.

The returner in both instances will await the punt and either try to return it, or call for a fair catch if the coverage men are bearing down on him quickly before the ball comes down. Field goals and extra points can be lumped together for explanation because they are the exact same setup of players for both types of plays.

Extra points, which are worth one point, happen after a touchdown is scored.

In youth football through collegiate football, the football is placed at the two-yard line.

In the NFL, the ball is placed at the 15-yard line to make the kicks more challenging.

Field goals, which are worth three points, can be attempted from anywhere on the field.

How far away from the end zone a team will attempt a field goal will depend solely on how far their kicker can kick the ball.

In lower levels of football, it needs to be even closer.

Some youth football teams won’t attempt a field goal, as they simply don’t have a kicker with a strong enough leg yet.

Field goals are also most commonly attempted on fourth down.

Just like punts, they occur when the offense can’t convert a first down.

The offense will attempt a field goal instead of a punt if the offense got the ball close enough to the end zone for the special teams unit to attempt the kick.

In both field goal and extra point attempts, the players will line up the same way, and their responsibilities will be almost exactly the same.

The kicking team will line up with seven players at the line of scrimmage, much like a normal offensive line alignment on an offensive play.

The long snapper lines up over the ball, with three players on each side of him.

These players will line up more in a bow-like shape, arching back slightly from the line of scrimmage instead of in a straight line across.

They will also start in a two-point stance with their hands on their hips instead of a three-point stance.

There will be two wing backs on each side of the field, lined up a few yards in the backfield and on a diagonal from the players at the end of the line of scrimmage.

The holder will line up approximately seven yards behind the long snapper, either slightly to the right or to the left, depending on whether the kicker is left- or right-footed.

The holder will put one of his knees on the ground, and the other leg will be bent with the foot on the ground.

The kicker will line up a few yards behind the holder, on a slight diagonal from him. This will give him a slight running start so he can kick the ball with more power.

The long snapper will snap the ball to the holder, who will catch it and place it nose down on the field at a slight angle for the kicker — with the laces spun away from the kicker so he kicks the back side of the football.

Meanwhile, the other team will line up and attempt to block, or at least disrupt the field goal or extra point attempt.

Ten of the 11 players on that team will line up at the line of scrimmage, almost in a straight line spread out wide.

The other player will line up behind them, shaded to one shoulder of the long snapper.

At the snap, the 10 players at the line of scrimmage will attempt to break through the line and get to the kicker to block the attempt or disrupt his kick.

The two outside defenders will take a wide angle to try to get around the wing backs.

The player lined up off the line of scrimmage will attempt to jump as high as possible and put his hands up to block the kick.

While they don’t get as much notoriety as the offensive or the defensive, how these units perform has as much, if not more, of an impact on the outcome of the game.

The saying is that special teams won’t often win games for a football team, but they can easily lose a game.