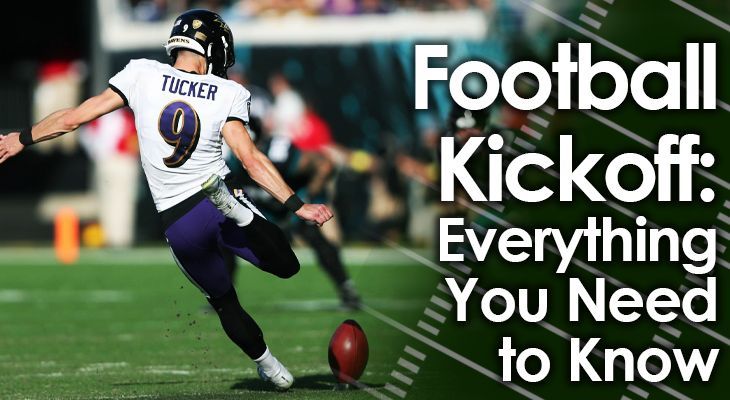 The kickoff in football is one of the most overlooked aspects of the game.

Most people who watch football look at the kickoff as just one of those "procedural parts" of the sport that marks the transition of possession from one team to the next.

It's true that kickoffs do just that -- serve as one of the main ways that one team will give possession of the ball to the other team.

And it's true that kickoffs are procedural -- they happen following any score and at the start of each half.

But while professional teams make it seem as though kickoffs are standard and mundane, they can actually be one of the most exciting plays in the game.

A solid kickoff return or kickoff coverage can completely change the outlook of a game in just a few short seconds.

Below, we'll take a look at everything you need to know about a football kickoff, including how it works, when they happen, and all the rules.

During a kickoff, a place kicker will lead the special teams unit, kicking the ball from a stable position on a tee as far down the field as he can.

In professional football, the ball will often travel the entire length of the field, and go into the end zone for a touchback (more on this in a bit).

The goal for the kicking team is to kick the ball as far as possible, pinning the receiving team deep in their own zone.

The goal for the receiving team is the opposite...

The receiving team returns the ball as far down the field as possible to set up the offense in the best possible field position.

During kickoffs, both sides deploy their special teams units.

While some of these players might be on the regular offensive and defensive units -- especially at lower levels of the game -- many of them have unique traits used specifically on special teams units. 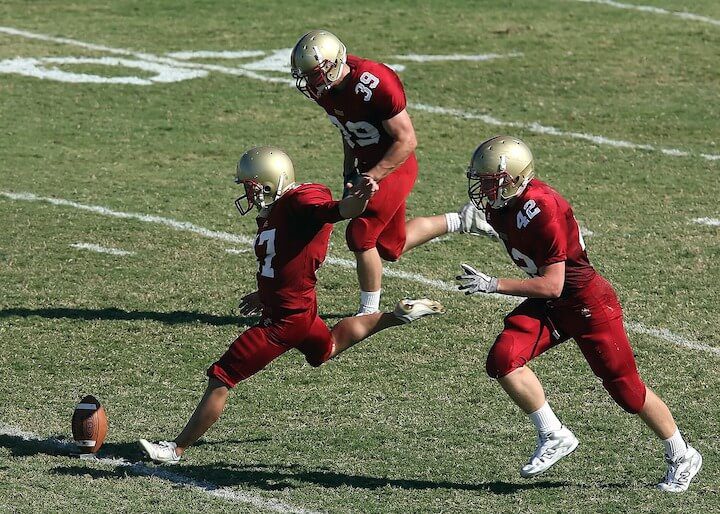 (b) At the start of a half
(b) Following a score

Which team receives the kickoff in the first half and which one receives it in the second half is determined by the opening coin toss.

A kickoff will also occur if the game goes into overtime.

The other situation in which a football kickoff occurs is following any score by one team. After a successful score -- including either a field goal or touchdown and extra point try -- the scoring team will kick the ball off to the other team.

There are a number of rules surrounding a football kickoff.

First, all kickoffs should start from the team's 35-yard line.

This is the line that will also serve as the restraining line.

Every player on the kicking team -- other than the kicker himself -- have to align themselves five yards behind that restraining line, with at least four players on both sides of the kicker.

All football kickoffs have to travel at least 10 yards, or from one restraining line to the next.

If the ball doesn't go that far, it's considered a dead ball, with the receiving team taking over possession at that spot.

The kicking team can only try to recover the ball once it's traveled those 10 yards, or whenever a receiving team player touches it first. 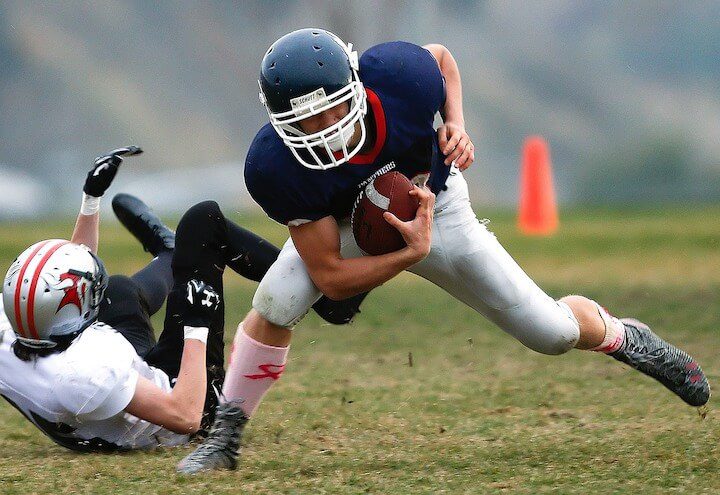 A touchback occurs if the ball travels into the endzone and the receiving team decides not to try to take the ball out.

They can simply catch it and kneel in the endzone or let the ball just drop.

When this happens, the play is dead, and the receiving team will take over possession at their own 25-yard line.

When the receiving team takes the ball out and tries to return it...

The kickoff will end whenever the kicking team successfully tackles the returner or forces him out of bounds -- just like on an offensive play.

The returner can score points by successfully running the ball all the way to the endzone without getting tackled or forced out of bounds.

This will result in a touchdown.

d. Kick Out of Bounds

It's a penalty if the ball travels out of bounds before crossing the goal line.

When this happens, the receiving team will take over possession at their own 35-yard line.

The kicking team can also force a turnover.

If the kicking team needs to get the ball back on offense quickly, they can perform what's called an onside kick.

In this case, the kicking team will purposefully only kick the ball about 10 yards, in the hopes of getting possession back.

Here, one of the players on their team can recover it before the receiving team is able to catch and secure the ball.

This is done a lot late in games when the kicking team is trailing on the scoreboard.

Football kickoffs may seem like an ordinary part of the game, but they are extremely important and can completely change a game around.

While professional teams make it all seem easy, it takes a lot of constant practice to get it all down pat.