Onside Kick Rules in Football: Everything You Need to Know 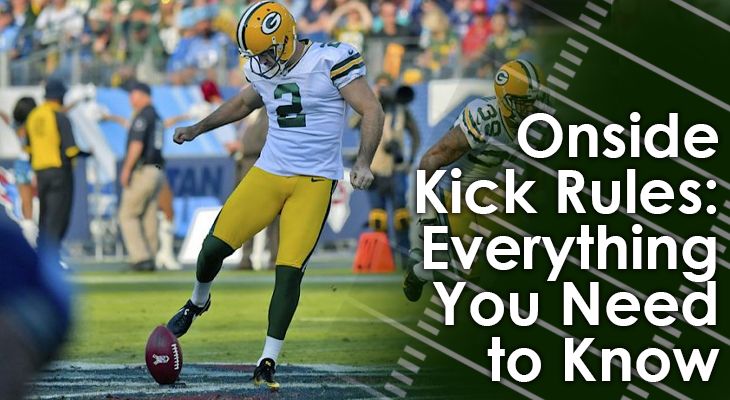 At certain times in a football game, one team may not want to kickoff the football deep to the other team -- opting instead for an onside kick.

This gives the kicking team the opportunity to recover the ball and turn it back over to their own offense.

True onside kicks are normally attempted near the end of a game. When a team who is about to kick off is trailing and needs to get the ball back to score, they can attempt an onside kick.

Instead of kicking the ball deep to the other team and allowing their offense to take over, they will instead try an onside kick that gives them the opportunity to recover what amounts to a fumble.

If the kicking team is successful at recovering the ball, their own offense will take over from the spot where they recovered it.

This then gives the kicking team an opportunity to score again quickly to overcome a deficit late in a football game.

There are specific onside kick rules that regulate how teams attempt them, and what must happen for the kicking team to legally recover the ball.

Some of these rules can be a little complicated, though...

So, let's take an in-depth look at what the rules for an onside kick are, and how the kicking team can attempt to recover and score late in the game.

Lining Up for an Onside Kick

When a kicking team is lining up for an onside kick, they will do so pretty similarly to how they would a regular deep kickoff.

Ten players will line up at the line of scrimmage, with the kicker positioned slightly behind them to set up.

Teams used to try to give themselves an advantage over the receiving team by loading up one side of the field with a lot of players.

By lining more players up on one side of the kicker than the other, it would give them a statistical man-to-man advantage over the receiving team.

Modifications made to onside kick rules in recent years, though, which now prevent this from happening.

One reason was that loading up so many players on one side of the kicker increased the chances that players would get hurt.

Now, there are specific rules for where players can line up:

At least five members of the kicking team have to line up on each side of the kicker, creating a completely balanced formation.

At least two players on each side have to line up between the numbers on the field and the hashmarks. This again prevents the team from taking all five players on one side and stacking them right next to each other.

Every player on the kicking team has to line up at the line of scrimmage and can't start running until the kicker makes contact with the ball.

In the past, kicking teams would line up a few players off the line of scrimmage so they could get a running start...

This is no longer allowed as this could result in a major injury happening.

There are also onside kick rules that determine how the receiving team must line its players up.

The reason for this recent rule change was to reduce the chances of surprise onside kicks.

This is because there will now be so many players on the receiving team lining up in one area that's close to what is considered the neutral zone.

Again, this helps reduce the likelihood of injuries on onside kicks.

When the Kicking Team Can Recover the Ball

On all kickoffs, a neutral zone of 10 yards is set up.

This zone starts at the location of the ball as teams line up for the start of the kick.

Once the ball is kicked it is then considered a live ball. Therefore, it is treated as a fumble until a player successfully recovers or the ball goes out of bounds.

There is one exception to this rule -- the ball must travel beyond the neutral zone before the kicking team can recover it.

That means that the ball must first travel 10 yards from the starting spot before a member of the kicking team recovers it.

If a kicking team member recovers the ball before it travels 10 yards, then a penalty will be called, and the receiving team will take possession of the ball.

Once it travels beyond the 10 yards, the ball is free game -- up for members of either the kicking or receiving team to recover it.

If the ball travels out of bounds before a player on either team successfully recovers the ball, then the receiving team will be given possession of the ball at the spot where it traveled out of bounds.

Teams may want to attempt an onside kick whenever they are trailing late in a game.

It's a great chance for them to regain possession and attempt to convert a late score to either tie the game or pull ahead for the win.

There are specific onside kick rules and they can be a little complicated.

That's why it's important for all coaches to educate their players on the rules and run them through practice before trying an onside kick in a game.

How Long is a Football Game? (All Levels Answered)

What are OTAs in Football? (Full Schedule and How They Work)

What is a Touchback in Football? (Full Explanation)

The Chop Block: What it is and Why it is Illegal in Football