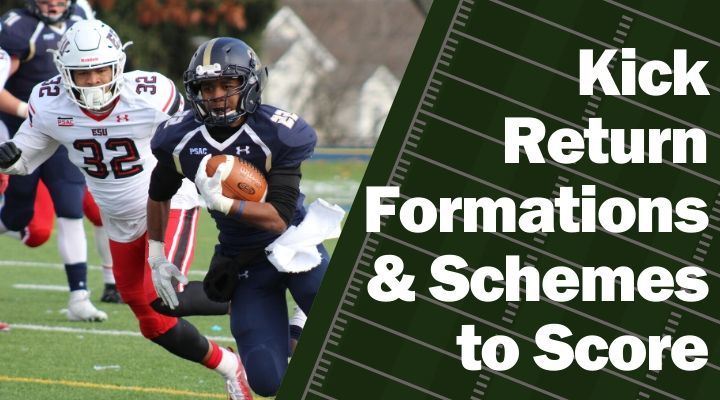 The kick return formation can be rather boring in football.

It's a special teams play that occurs at the start of both the first half and second half of a game, as well as after every scoring play.

For the most part, the goal of the kick return team is to bring the ball upfield as far as possible to give the offense the shortest field with which to work on its path to score points.

But by changing the mindset of your team going into a kick return and by creating formations and schemes, the kick return game can actually be an offensive weapon in its own right.

The first step to scoring on a kick return is changing the mindset of your team.

You should act as if your kick return is a part of your offense and not a special team. Their job is to do their best to score on every return.

It's another offensive play that includes 11 players whose primary job is to score points.

With that mindset, now the players can begin to institute the coach's formations to try to get the ball into the end zone.

There are two parts to a successful kick return:

Let's take a look at both. The kick return formation will be pretty simple.

There will be three "levels" to the formation, with the front two being blockers and the back line consisting of two players with the chance to be the primary returner.

The front line of blockers will be made up of five traditional offensive linemen-type players. They’ll line up slightly inside the 45-yard line.

The second line of blockers, which will include four players who are built more like fullbacks, will line up near their own 25- or 30-yard line.

That last set of two returners will line up close to their own goal line.

The Key to Any Kick Return Scheme - The Wedge

If you want to have a successful kick return formation, the key to doing so is setting up a blocking wedge.

As of 2009, the NFL prohibited having more than three players in this blocking formation.

Most of the time, the players who are involved in creating the wedge are your front-line players -- your offensive linemen or even defensive linemen.

When the ball is kicked and they begin to retreat (more on this in a minute), the players involved in the wedge will arrange themselves roughly 10 yards in front of the returners, somewhere between the 15- and 25-yard line.

They’ll stand together in a wedge-like shape, standing about two arm lengths apart from each other.

The wedge players will need to adjust where they position themselves in the scheme based on where the ball is kicked from left to right as well as how deep it’s kicked.

The wedge blockers will be asked to make a 90-degree turn and then accelerate forward before they make any blocking contact with the kick coverage team.

The kick returners will then follow the wedge as their primary lead blockers on their way upfield.

When the Ball Is Kicked

The first move of all players on the front two lines of a kick return team will be to retreat toward their own end zone.

This will give them depth and time to position themselves properly in order to effectively block the kick return team, whose players will get a running start downfield.

The front line will retreat roughly 10 to 20 yards from their initial position on the field.

The second line is where the wedge blockers will come from.

Most of the time, the wedge will consist of two players on one side of the field and one of the players on the other side of the field. Again, these players will retreat back so that they’re roughly 10 yards in front of the kick returners, depending on where the ball is kicked.

Which kick returner actually handles the ball will depend on where the ball is kicked.

The returner on the side of the field where the ball goes will obviously be the one who catches the ball and is the runner on that player.

The other kick returner will be responsible for sealing off kick coverage players who are trying to get to the returner from the other side of the field. His job is to seal off that coverage man from getting to the returner, which would then allow the returner to proceed upfield behind the wedge.

The kick returner's job is to follow the wedge and keep his eyes peeled over the entire field. He’s looking for a running lane primarily behind the wedge -- as that’s where most of his blockers are.

However, if he’s unable to find a hole there, his job is to search for another one and cut-back to get there.

A good kick return formation can be a potent weapon for any football team.

It doesn't have to just be a special teams play that puts the offense in a good position to score.

With the proper mindset, formation, and scheme, the kick return game can become an offensive weapon in its own right.