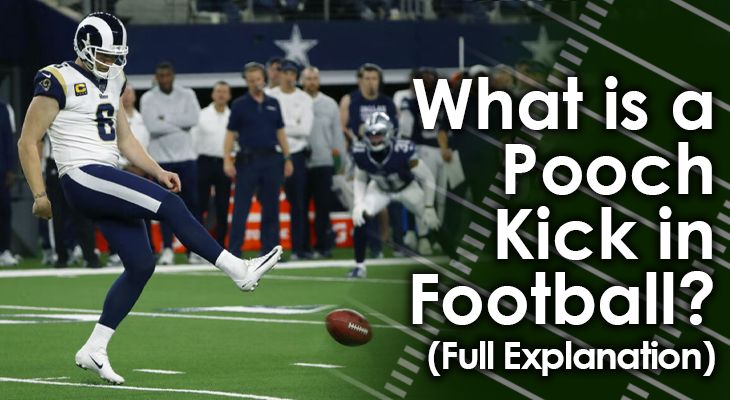 In football, a kickoff always occurs at the beginning, at the start of the second half, and following every score. This is how a change of possession occurs in these situations.

In most kickoffs, the kicker will simply drive the ball as far downfield as he can -- looking to either get a touchback or at least pin the receiving team deep within their own end.

But, there are other times when they might want to use a different tactic to prevent dynamic returners from gaining a lot of yardage on a kick return.

A pooch kick is similar to a squib kick, but executed in a different fashion.

The goal of each is to remove the opportunity for the receiving team to execute a big return on a kickoff.

Let's dive a little deeper into what a pooch kick is and how your team can effectively execute one.

What is a Pooch Kick?

A pooch kick will concede yardage to the receiving team in exchange for forcing a non-traditional return man to catch the ball.

In essence, the goal of a pooch kick is to force one of the "up men" on the return team to be the one who receives the kick, rather than the deep return men who are better equipped to convert longer and more devastating returns.

In this definition, a pooch kick is very similar to a squib kick as they both aim to achieve roughly the same thing.

However, they are done in two different ways:

A squib kick is a low, driving kickoff in which the ball will travel almost like a line drive in baseball. It will stay relatively low to the ground for most of its flight, and will eventually make contact with the ground in front of one of the up men.

A pooch kick, on the other hand, will take the exact opposite path...

It's a high kick in which the kicker will get under the football more than usual.

The goal is to have the ball land around the opponent's 20-yard line or so.

Since the ball will be very high in the air, it will give the kick coverage team plenty of time to get downfield to make a quick tackle on the receiver once they catch the ball.

In addition, because the kick coverage players will be arriving at about the same time the ball comes down, the receiver won't be able to opt to let the ball hit the ground so a more talented returner can get it.

If they do that, it leaves open the possibility that the kick coverage team could recover the ball -- since the kickoff is considered a live ball at that point. 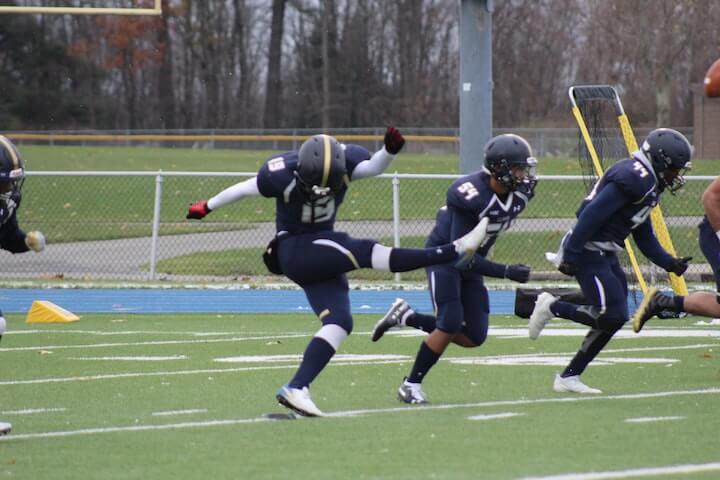 How to Execute a Pooch Kick

To execute a pooch kick, the kickoff team will line up in the same formation as they would if they were kicking the ball deep.

The kick coverage team will line up at the ball, with players split on either side of the where the kicker lines up.

The kicker will line up in the middle of the field, about 10 yards back from where the ball is set up on the tee.

He'll then start to approach the ball in a fashion that he's going to kick it deep.

The other kick coverage players will need to time their runs so that they don't cross the ball before the kicker makes contact with it.

When a kicker looks to drive the ball deep, he'll look to contact his foot with the ball slightly below the middle of the ball.

This will allow him to get enough power and height on the ball at the same time so that it can soar through the air as far downfield as possible. He'll also be using as much force as possible so that he can connect with the ball using all his power.

With a pooch kick, the kicker will aim to contact the ball near its bottom point.

The goal here is to get more height than depth on the ball, and the way to do that is to "get under it," or contact it near the bottom end of the ball.

The kicker will also put less force behind his kick.

Instead, he'll look to aim the ball to a specific spot on the field.

Normally, kickers want to place pooch kicks around the opponent's 20-yard and toward one of the sidelines as this will pin the receiver with his back near the sideline, limiting his choices when it comes to trying to run with the ball after the catch.

The kicker needs to be careful not to get too much air under the ball, though, so that it doesn't pop straight up in the air.

He still wants to drive it downfield to about the 20-yard line, which will take some power.

The kicker also needs to be careful not to kick the ball out of bounds.

While he wants to pin the receiver near the sideline, if he were to kick the ball out of bounds, it would result in the return team taking over possession at their own 40-yard line, which wouldn't be good.

Kickoff teams don't always want to pin receiving teams as deep downfield as possible when they kick the ball off.

Sometimes, they want to avoid having the deep returners get an opportunity to gain a lot of yardage on a kickoff.

One way they can do that is by using a pooch kick, which is a high arching kick that aims to have one of the 'up men' catch the kickoff around the 20-yard line.

Kickers should practice the pooch kick, as it takes some special skill and touch to consistently place the ball where they want it to go.