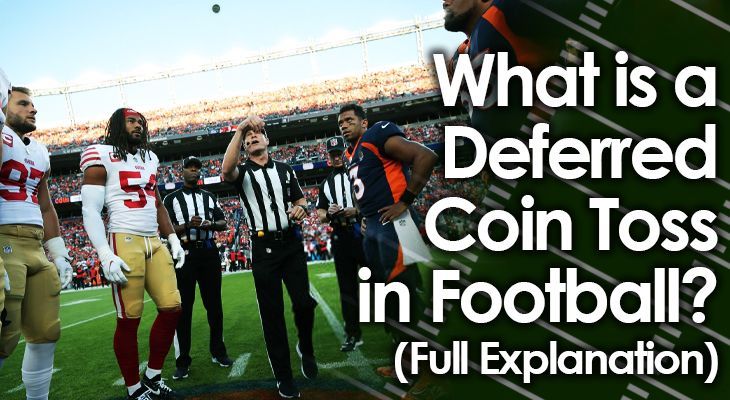 Before each game of football officially starts, a coin toss is held to determine which team will get the ball first.

The referee brings the captains of each team to the center of the field, and the lead captain of the away team will call either heads or tails, and then the referee will flip the coin into the air.

Whichever team wins the coin toss will have three options:

Option #2: Opt to kick off and start the game on defense.

That last option has become more popular in recent years.

But, what is a deferred coin toss in football?

Let's discuss what a deferred coin toss in football is, why a team might choose to defer, and what the pros and cons of doing so are.

What is a Deferred Coin Toss in Football?

When teams defer the coin toss, they pass the decision of who receives the opening kickoff to the other team.

That team will naturally decide to receive the opening kickoff, as they would be at a huge disadvantage if they didn't (more on that in a bit).

Deferring the coin toss is a way for teams to start the game on defense and work around a rule in football that still allows them to receive the second-half kickoff. 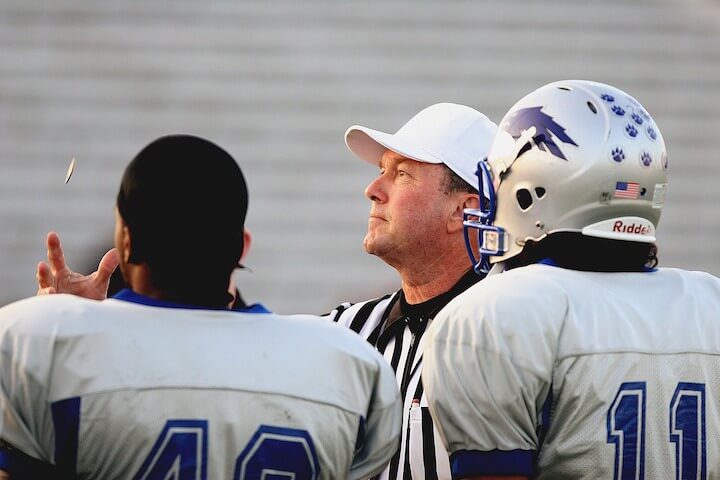 Why Teams Choose to Defer the Coin Toss

A deferred coin toss was only an option in high school and college football up until 2008, when the NFL decided to adopt the option as well.

Before then, teams that won the coin toss could only decide whether to receive the opening kickoff or kick it to the other team.

All teams that won the coin toss would choose to receive the kickoff.

This is because of a little-known football rule, which I'll explain now.

Technically speaking, each team has a choice on whether they want to (1) receive or (2) kick off at the start of each half.

If the home team decides they want to kick off to start the first half, then the away team would have the option to start on offense in both halves.

Because of this rule, teams that won the coin toss basically had no choice but to receive the opening kickoff -- even if they preferred to start the game on defense.

"Deferring" just means they are passing the decision of whether to kick or receive at the start of the game to the other team.

That team then has no other choice but to receive the opening kick off, otherwise the other team would receive the ball at the start of both halves.

Benefits of Deferring the Coin Toss

1. Many coaches believe they gain a huge advantage by starting the second half with possession of the ball.

This will typically give them more possessions than the other team during the more crucial parts of the game.

There is by no means a guarantee that the team receiving the kickoff will get more possessions in that half, but it happens more often than not.

2. Starting the game on defense gives the team a chance to back up the other team deep in their own end.

Teams with great defenses may like to trust that unit to make a quick stop, which would then result in their offense taking over in good field position following a punt. 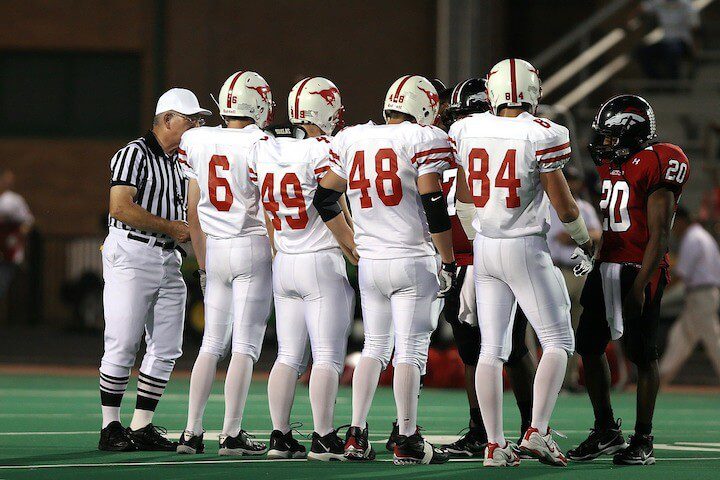 Downsides of Deferring the Coin Toss

There is one clear downside of deferring the coin toss...

The team that receives the opening kickoff has the opportunity to score first, which could set the tone for the rest of the game.

If the home team is able to get the ball first and capitalize on it by scoring, it could create a very rowdy environment in the stadium.

If the away team is able to get the ball first and score on that opening drive, it could also silence a rowdy crowd and make it easier to play on the road.

Teams that have a great offense but a poor defense might want to choose to receive the kickoff rather than defer the coin toss for that simple fact.

When a team defers the coin toss, they're passing the decision of whether to receive or kick the opening kickoff to the other team.

It's a tactic that many coaches swear by, as it allows them to work around an obscure rule in football and start the game on defense.

There's no clear-cut advantage or disadvantage to deferring vs. not deferring, but it's still a choice that many coaches continue to make, as they like to start the second half with their offense on the field.