What is Clipping in Football? (Rule Explanation) 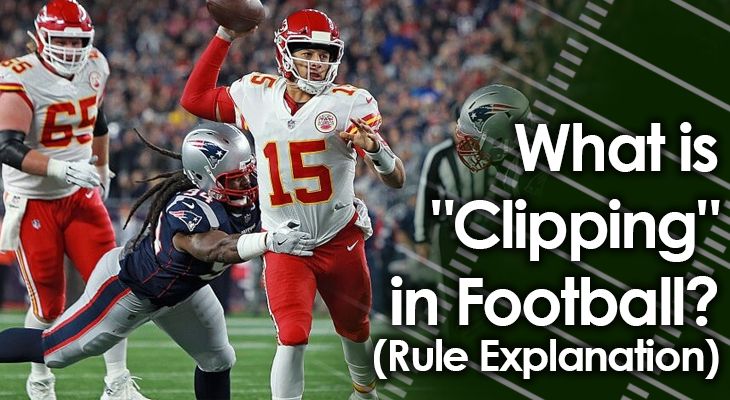 There are penalties in football that are relatively straightforward when it comes to their name and explanation.

However, not all rules are this straightforward and easy to understand...

One of these more complicated penalties in football is "clipping."

It's one of the more serious penalties in football, as it has the same effect of a personal-foul call in terms of penalized yardage, so it's very important to understand.

Clipping is a serious penalty because there's a high level of danger associated with it.

In other words, when a player commits a clipping penalty, they are putting another player at high risk for injury. This is one reason why this rule has been in effect for more than 100 years in football.

But, what exactly is clipping? Let's take an in-depth look at this rule.

The Definition of Clipping

A clipping foul occurs any time a player blocks someone on the other team from their back and either below or at their waste.

This is a very vulnerable position for the opponent, as they can easily suffer a major injury in this scenario.

Clipping penalties are also called in instances where a player, in the act of blocking, ends up rolling onto the legs of the defender.

Again, this is a VERY dangerous situation for the defender, which is why it's deemed a penalty.

Know that clipping penalties can happen when a blocker initiates a block while the defender is facing away from them. The first contact cannot be to the other player's back in any way.

Contact can be initiated from the side, as long as both players run in the same direction. This would not be a clipping penalty.

Contact can be made at waist level or below, but it has to be continuous contact, and it has to be initiated head-on, not from behind.

Why Clipping is a Penalty

The clipping penalty was first instituted way back in 1916 in college football to prevent major injuries that were happening at the time.

Despite being in place for more than 100 years now, major injuries still occur due to instances of players violating this rule.

When a player suffers an injury from a clipping penalty, it's rarely a minor one.

This is why it's very important to teach all players from a very young age what a clipping penalty is, and how to avoid committing one.

Not only does it help your team avoid costly penalties, it can save players on the other team from suffering extremely serious injuries. 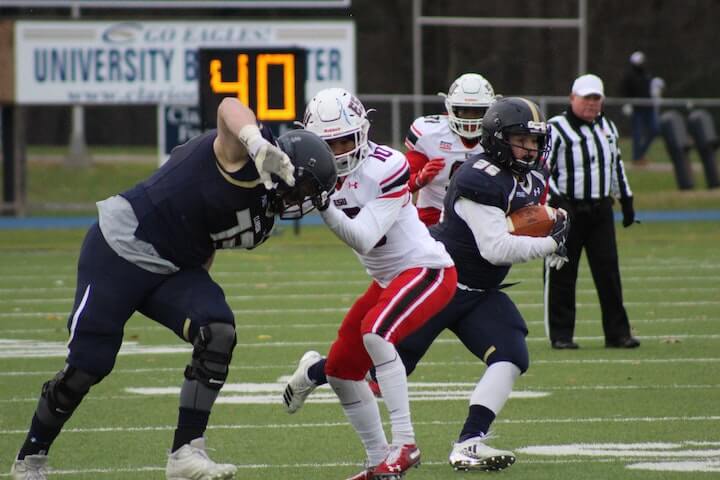 Exceptions to the Clipping Penalty

There is, however, one major exception to the clipping penalty.

If the contact happens in what's known as close-line play, then it's NOT considered a clipping penalty.

The "close-line play" area is in between these two borders and along the line of scrimmage.

Within this area, players may block defenders from behind as long as the contact is above the waist.

Any contact below or at waist-level will be a clipping penalty, even if it occurs within the close-line play area.

Players also may NOT roll onto the back of a defender's legs.

What Happens When a Clipping Penalty is Called?

As mentioned before, a clipping penalty is universally considered one of the most serious penalties in football.

This means that what happens after a clipping penalty call is the same for all age levels -- from youth football, to high school, collegiate, and even the National Football League.

After a clipping infraction, the team committing the foul is penalized 15 yards.

If the offense is the team that commits the penalty, they will move back 15 yards from the spot of the previous play, and they will repeat the previous down.

If the defense commits the penalty, it will be treated like a personal foul call.

The ball will move forward 15 yards, and they will also receive an automatic first down.

For instance, if the defense commits the foul on 3rd-and-5 from the offense's 45-yard line, the next play for the offense will be 1st-and-10 from the defense's 40-yard line.

Clipping is one of the most serious penalties in football because of the high risk of causing major injuries.

That's why just about all instances of blocking another player from behind and below or at waist level are not allowed in ALL LEVELS of football.

The infraction is serious and the same can be said of the penalties given.

Referees penalize the committing team 15 yards, with an automatic first down awarded to the offense if the defense is the team that commits the foul.