The Chop Block: What it is and Why it is Illegal in Football 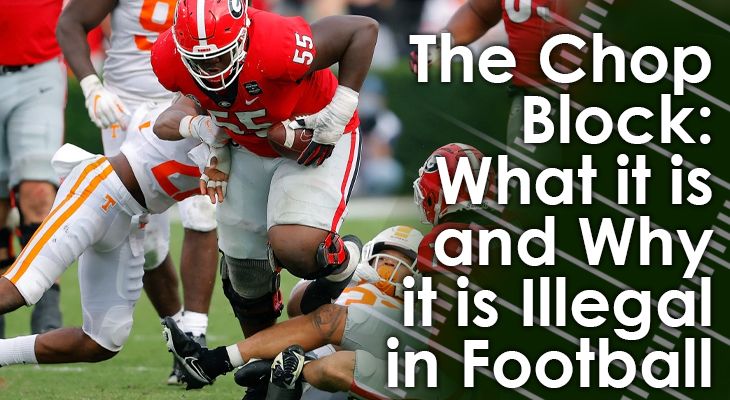 There was a time when the chop block was one of the most devastating blocking tactics in football.

Teams throughout football used the chop block as a way to open up holes along the line of scrimmage, which made it easier for ball carriers to run through and gain yardage.

Wide receivers also used it to take out cornerbacks and other defenders from the outside.

But there was a problem...

These blocks target the lower body of a defender when they're in a very vulnerable position.

So while offenses used the it as a surprise attack to open holes, they were also causing widespread, career-ending injuries.

Because of this, the National Football League first limited the use of these blocks before finally outlawing all instances of the scheme in 2016.

The NCAA banned the chop block in college football 36 years before that, in 1980.

Here's what a chop block is, how it's defined, and how it's penalized in the NFL and almost all levels of football.

What is a Chop Block

You can define a chop block in a few different ways...

The most common type of chop block is also referred to as a high-low block.

Here, one offensive player (usually a lineman) engages with a defender above the waist for a block.

Then, a second offensive player (typically the lineman next to them) blocks that same defender below the waist.

This type of chop block was very successful in that it upended the defender.

But at the same time, it resulted in a lot of major injuries to defenders' ankles and knees.

This type of block would often see defenders roll their ankles or bend their legs in awkward ways, causing significant injuries.

This type of chop block has been illegal for a while.

b. Toward the Play

A version of the chop block that was still legal in the NFL until 2016 was one that happened toward the "flow of play."

The start of this variation would be the same as above.

Two offensive players lining up next to each other at the start of the play would engage with a defender.

The first offensive player would engage with the defender above the waist.

The second offensive player would then enter the picture and chop the defender below the waist.

This was legal as long as the block occurred when the "flow of the play is toward the block," according to the NFL's rules.

This would theoretically lower the likelihood of an injury since the block wouldn't bow a defender's lower body in an unnatural way.

However, the NFL finally disallowed this version in 2016 as well since it was still putting defenders' bodies at significant risk.

c. Outside the Tackle Box

Another version that's been illegal for a while is one that happens outside of the tackle box.

Wide receivers would most often initiate these blocks.

He'd then surprise a defender by delivering a blind-side block, opening up a huge hole for a ball carrier.

There is a legal version of this block -- called a crackback block.

Though blocks make use of the offensive player's shoulders, the difference between the two is where the player targets the block.

Crackback blocks see the receiver target the shoulder area of the defender -- usually a defensive end or an outside linebacker.

The chop block, on the other hand, targets the defender waist-down.

This is very dangerous, as it bends the defender's lower body in an unnatural and violent way.

What Happens When a Chop Block Occurs

When a chop block happens on the field, the referee will throw a penalty flag.

In the NFL, all instances of a chop block -- no matter which version happens -- is a major penalty.

It results in a 15-yard penalty against the offense and a repeat of the same down, no matter what happens on the play.

For an example, let's say the down and distance is 2nd-and-10.

The offense gains 12 yards on the play, but the referee calls a chop block on one of the offensive players.

This penalty will then result to cancelling out the play.

The offense will then go back up 15 yards from the original line of scrimmage, and will repeat the down.

The next play for the offense will be 2nd-and-25 and will begin 15 yards back from the line of scrimmage on the previous play.

The chop block is an extremely dangerous play that can result in major injuries to defenders.

That's why the NFL finally outlawed all versions of the chop block in 2016, ruling them all major penalties resulting in 15 yards against the offense.

As youth coaches, it's important to teach your players what a chop block is and why it's illegal.

This will help your players learn better blocking techniques and keep both them and their opponents safe during the game.

Some forms of similar blocks like cut blocks are still legal; and while there are similarities, there are major differences, too.