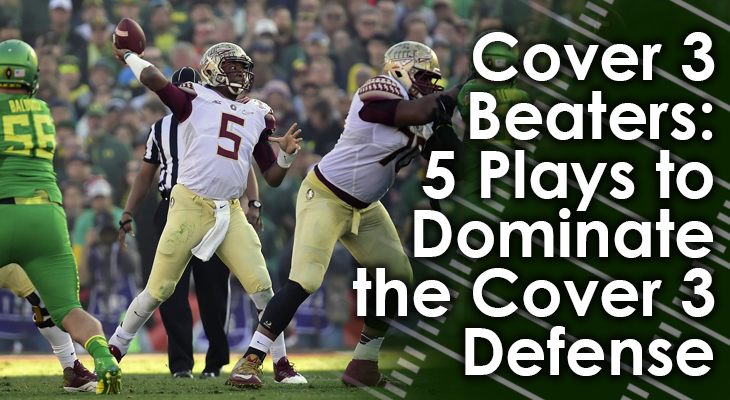 The Cover 3 defense is one of the most popular base zone coverage defenses.

Much like the Cover 2, it involves rushing four down defensive linemen on every play -- with the remaining seven defenders dropping into coverage.

Where the defensive differs from the Cover 2 is that it will drop three defenders deep and keep the remaining four as "under" defenders.

With so many different zones on the field covered, it can be very hard to beat Cover 3.

When run properly, it prepares for just about anything an offense can throw at them.

Teams can run it out of almost all base packages as well as sub-personnel packages that swap in a fourth linebacker or a third cornerback.

There are, however, some "Cover 3 beaters" designed specifically to beat it.

Below are some plays you can call to beat the Cover 3 defense as well as a basic explanation of how the defense works: 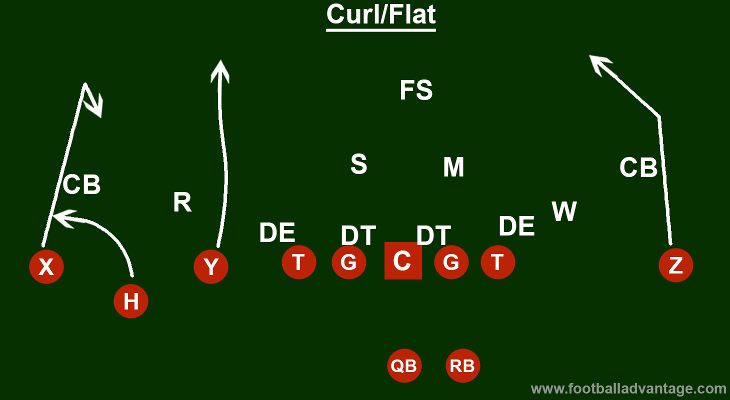 One of the most effective Cover 3 beaters is the Curl/Flat, where the quarterback will read how the outside "Rover" reacts.

The X receiver in this case will run a Curl route approximately 12-15 yards downfield.

The H will then either run a Flat or a Quick Out route toward the left sideline.

Depending on how the R reacts, the quarterback will throw to either the Curl or the Flat route as his primary target.

The Y and Z receivers will each run deep routes on this play.

The Y will run a straight Go route, while the Z (the lone receiver on the right side) will run a Deep Post pattern.

The running back, meanwhile, will stay in to block, though he can also run a Flat route or Quick Out route of his own to the right. 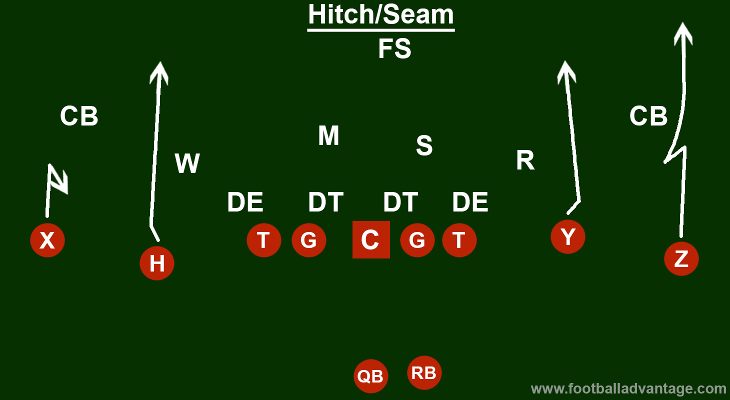 This is another cover 3 beater that seeks to attack the outside linebacker to the left side of the field, who will be the Will in this case.

The two routes run from the receivers to the left will seek to force the Will to make a decision -- stay in for the shorter outside route or drop back to cover the deeper route.

The X will run a Hitch route at a depth of approximately five yards.

The H, meanwhile, will run a Seam route deep down the field, near the left hash marks.

On the other side of the field, the Y will run a Seam route as well. The Z can run a double move, a Hitch & Go.

It's designed to mirror the left and right sides of the field, but try to fake the cornerback out and hopefully leave open space deep down the right sideline.

The running back can either stay in to help block or run a Flat route toward the right sideline. 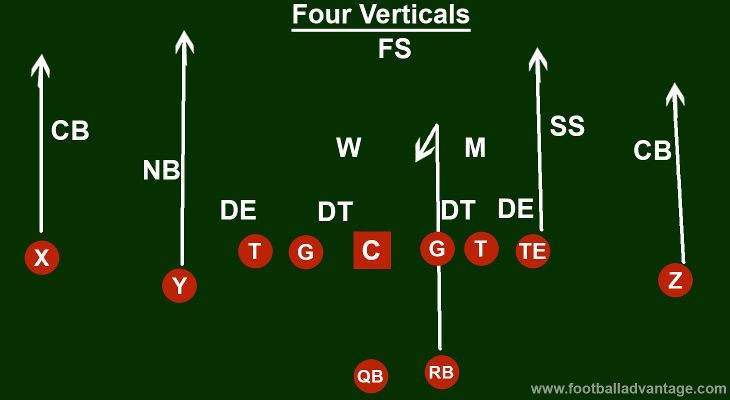 A really fun (and effective) way to attack the Cover 3 is by running this Four Verticals play.

This concept here is quite simple actually: Since there are only three deep defenders, they won't be able to cover four deep routes sufficiently.

In this example, all four main receivers will run Go routes straight downfield from where they line up.

The Y receiver will line up at the line of scrimmage as a tight end to cause more mismatches and potential confusion.

The running back, meanwhile, will run a Hitch route right over the middle of the field, serving as a safety valve for the quarterback if none of the deep routes are open.

He should delay a few seconds before running his route, to open up even more space. 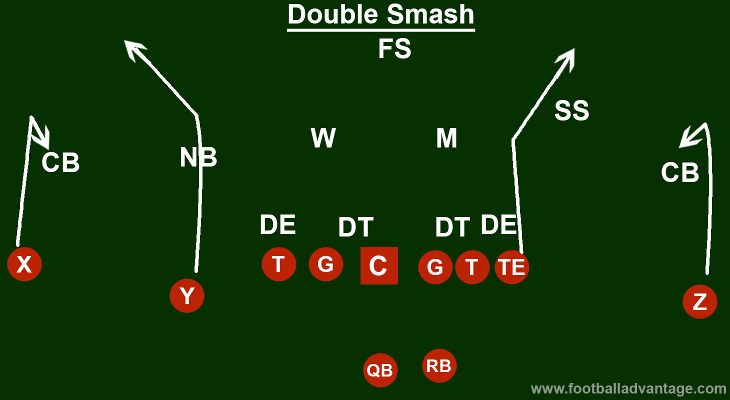 Another great way to attack it is by mirroring combo routes on both sides of the field.

This play will involve a tight end at the line of scrimmage to the right with one receiver on that side of the field, and two receivers split wide to the left.

The concept here is to have both outside receivers on each side run a Deep Hitch, roughly 10-12 yards downfield.

The inside receivers on both sides will run Deep Post patterns toward the sideline on their side of the field. 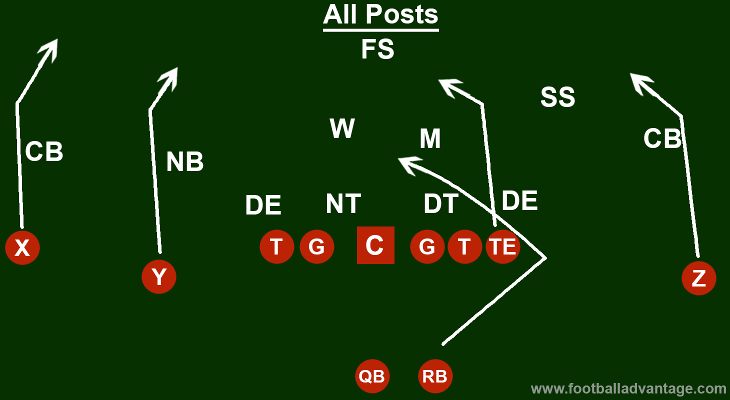 Similar to the Four Verticals concept, you could also run a play where all receivers would run Post patterns.

That would clog up the middle, making it difficult to complete a pass over the middle of the field.

This play is also trying to take advantage of the tendencies of defenders.

When they see multiple players in the same zone, or players crossing in front of their face, then can get thrown off the concepts that were called for them.

If all defenders do exactly as they're supposed to do perfectly, in other words, this play may not work as well as some of the others on this list.

However, it's hardly ever the case where every single defender does exactly what they're supposed to do on every single play.

Even if they do, though, you can sneak in the running back into an empty space in the short middle of the field by having him run a Slant route, after first angling toward the outside right. 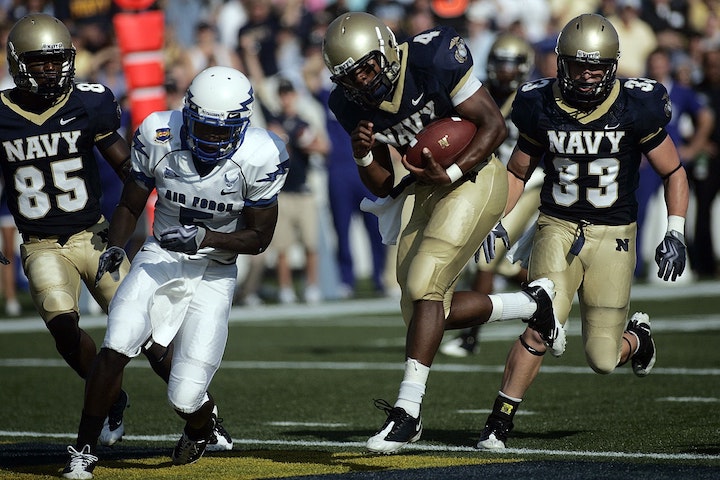 What is the Cover 3 Defense?

The Cover 3 defense is a zone scheme that drops three defenders deep, which is where the scheme gets its name.

This is similar to the Cover 2, which gets its name from the fact that it has two defenders drop deep (both of the safeties).

Here, both cornerbacks drop into the outside third of the deep section of the field, with the free safety playing the middle third.

Underneath that, the remaining four "under" defenders will split that part of the field in fourths.

The flexibility here is one of its strengths, as teams can deploy it against a number of different offensive personnel.

The weak-side linebacker (Will) along with the strong safety (or nickelback) will drop to cover the curl-flats on the outside fourth of the field.

The strong-side linebacker (Sam) and middle linebacker (Mike) will each be responsible for the hook drops in the middle fourths of the field.

For a long time, the Cover 3 was viewed as a defensive scheme only used in high school or lower levels of the game.

That's because professional and even collegiate offenses were able to take advantage of passing concepts that attacked the defense at three levels.

That all changed in recent years, though, with many teams utilizing it as the core of their defensive scheme. 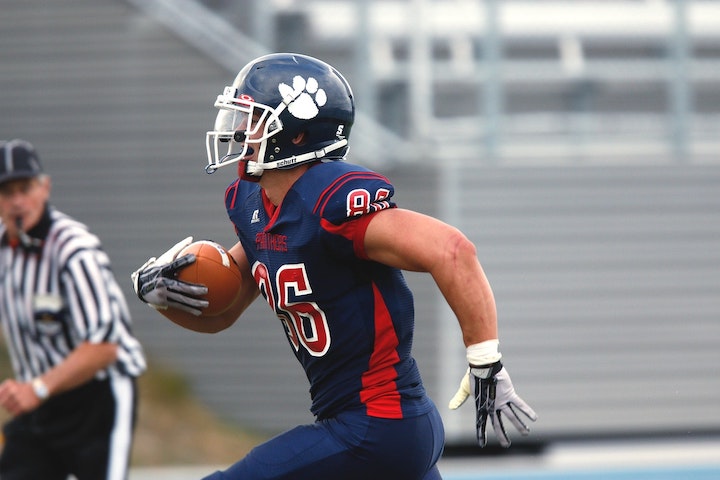 The Cover 3 defense has morphed into one of the most efficient and used defensive schemes in all of football.

It's a solid zone coverage scheme that involves rushing four defenders and dropping seven into coverage. Three of those seven will drop deep and the remaining four will stay in the mid-range.

While the defense is very effective at just about any level of the game, there are plenty of plays and combo route concepts that can take advantage of some of the weaknesses of the Cover 3 -- and the tendencies of actual defenders.

Start with the above Cover 3 beaters as you seek to beat it, and branch out with new concepts of your own.