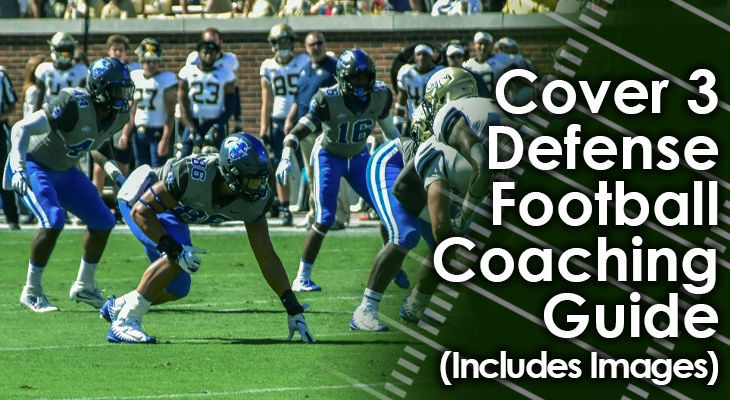 The Cover 3 defense is one of the more popular zone-based defensive alignments in football.

At one time, it was thought of as only a defense that youth football teams and teams at the high school level would utilize often in a game.

However, that idea has changed dramatically over recent years.

Especially with the Seattle Seahawks’ “Legion of Boom” defense utilizing it all the way to a Super Bowl title recently.

The concept of the Cover 3 defense is that seven defenders drop back into coverage in two distinct zones:

a. Four players covering the short and middle zone.

This defense protects against the deep passing plays quite well, but it’s also good against the run because the strong safety lines up near the linebackers and closer the line of scrimmage than he normally does (as we’ll see later).

This idea of being a solid defensive alignment against both the pass and the run is why many youth football teams have often incorporated it in their game plans.

And it’s why more and more teams at advanced levels like at the college and professional ranks are starting to do so as well.

Who Should Use the Cover 3 Defense? 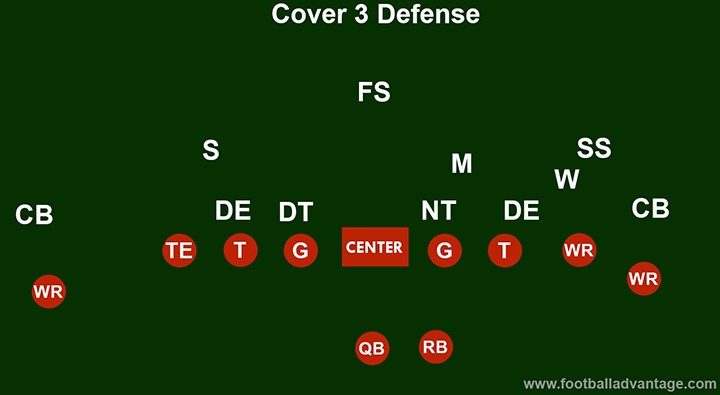 The Cover 3 defense is one of those alignments that can be used in some fashion by just about any team.

It’s a defense that is often used in early downs on a drive because it’s good against both the pass and the run, and offenses are often less predictable on first and second downs than they are on third downs.

The Cover 3 relies on the pressure up front to be generated by the four down defensive linemen, while the other seven players on the field are asked to drop back into coverage on pass plays or be responsible for a specific zone on the field against run plays.

The alignment can be implemented out of a base formation with not a lot of wrinkles, blitzes, or changes, or it can be tinkered with to confuse offenses even more.

This is done a lot at the more advanced skill levels with players who have an intricate knowledge of the game and have been playing for a long time.

It’s Simple - The Cover 3 defense gives each player a responsibility for a zone on the field. It doesn’t ask any defender to do too much, no matter whether the offense ends up choosing a pass play or a run play.

It’s Versatile - The Cover 3 defense is good against both the pass and the run. That means you don’t need multiple players available to shift on and off the field when your team is either running, or not running, a play out of the Cover 3 alignment.

It’s Great Against the Deep Ball - With three defenders dropping back to cover the deep zone, the Cover 3 defensive alignment is great at protecting against the big passing play over the top.

It’s Easy to Adjust - Because of the way the strong safety lines up at the same depth as the linebackers, it’s easier to adjust to a running play than other forms of zone defense. More players lined up at a medium depth doesn’t leave nearly as much room to run or for shorter passing plays than, for example, the Cover 2 defense.

Could be Susceptible to Play Action - If the offense is able to trick defenders into thinking they’re a running play, and makes a defender or two take a step forward instead of steps back, then there could be opportunities for big plays over the top.

Could be Susceptible to Spread Formations - Offenses that run the spread formation with multiple speedy running backs and multiple wide receivers might be able to take advantage of the fact that all three linebackers will be asked to go out in coverage.

Might Be Open for Chunks of Yards at a Time - Since the cornerbacks’ first steps will be back away from the line of scrimmage, the wide receivers will have a few yards of cushion to roam free. These shorter completions aren’t much in any one particular play, but they can add up here and there to be enough to sustain a long drive for the offense.

How to Run the Cover 3 Defense 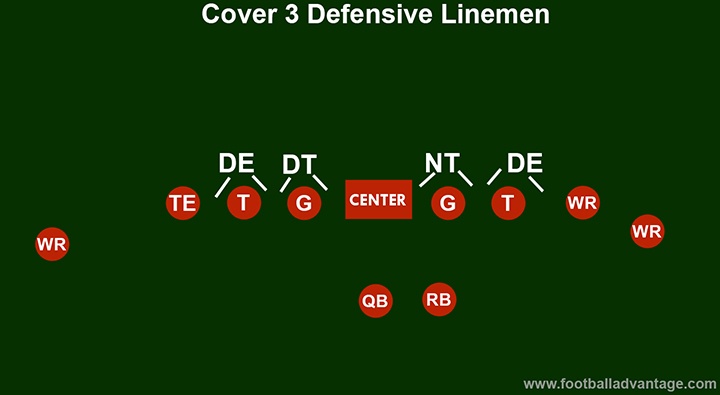 Defensive linemen in a Cover 3 scheme are tasked with putting as much pressure in the backfield as they possibly can.

They’re asked to run straight forward, blowing up as many offensive linemen as possible and causing as much disruption as possible on every single play.

While blitzes can happen more frequently in a base Cover 3 alignment than they will in a Cover 2 base alignment for example, the four defensive linemen are often the only players on the field who are tasked with applying pressure on the offensive line.

That’s why it’s imperative that these four players have the speed and strength to clog up the line of scrimmage and break through to create pressure in the backfield.

The two defensive tackles in a Cover 3 defense will line up anywhere between the offensive tackle and the center.

There are two defensive ends on the field in a Cover 3 defense.

They are lined up either on the offensive tackle’s outside shoulder or over the tight end if there is one on the field.

While the defensive linemen may use curls or stunts between the defensive tackle and defensive end on the same side of the field to cause some confusion, the primary duty of the position is to cause as much disruption as possible at the line of scrimmage. 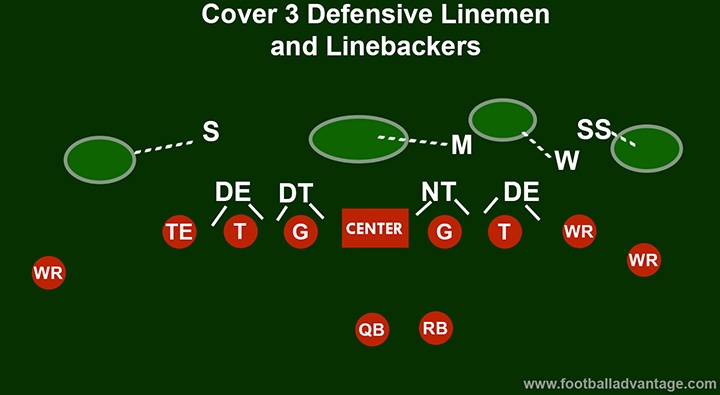 The middle (Mike), strong-side (Sam) and weak-side (Will) linebackers in a Cover 3 defense will all be tasked with covering a quarter of the field width wise.

The area they’re responsible for stretches from the line of scrimmage to about five yards or so behind where they line up.

They will be joined at this level – both in terms of where they line up pre-snap and where they go post-snap – by the strong safety.

The Mike linebacker will often line up a little closer to the line of scrimmage, as will the Will.

This is to help with coverage against run plays that the offense might run.

They have the ability to do this in a Cover 3 defense because the strong safety will be lining up at a depth similar to where the linebackers are normally positioned at the snap of the ball.

This is a great nuance to the Cover 3 defense, why it’s good against the pass and the run.

It’s also a reason why both the Mike and the Will are the ones most often asked to blitz, if the defensive coach decides to bring extra pressure on any given play.

The Sam linebacker will most often line up a little bit deeper than the Mike and the Will on his side of the field, at a depth equal to that of the strong safety on the field opposite him.

The strong safety will line up wide of the Sam but inside the cornerback on that side of the field, at a depth similar to that of the Will.

At the snap of the ball, the Will and the strong safety will split out wide to cover the area that’s left void by the two cornerbacks, who are responsible for deep zone coverage.

The Mike and the Sam will drop back into the middle of the field to cover their respective “quarter.”

Against a run play, the three linebackers and the strong safety will have primary responsibility for plugging open holes, funneling ball carriers to the middle of the field, and making most of the tackles on plays in front of them. 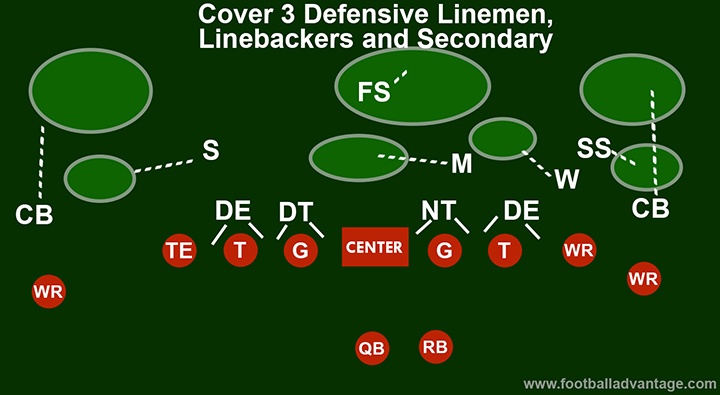 Since we’ve already discussed the strong safety as a linebacker in this system, that leaves only the two cornerbacks and the free safety.

The free safety in a Cover 3 defense will be lined up in center field, behind the Mike linebacker and the only player at his depth.

His responsibility will be coverage of the middle deep zone on the field. He can also either shade to the third of the field to his left or his right if a deep pass is thrown near either sideline.

The cornerbacks’ often take their first few steps back in a sideways, shuffle form in a Cover 3 defense, so they can identify whether the play is a pass or a run at the snap of the ball.

They need to do this because their coverage responsibility is the deep zone on their side of the field.

Because of this, they’re tasked with dropping back pretty deep into coverage, so it’s important that they don’t mis-read a play as either a run or a pass, otherwise the defense could end up surrendering a big gain.

The entire secondary’s responsibility is to cover this deep zone and keep every play in front of them.

While the free safety does provide some extra support in coverage to the two cornerbacks, that possibility won’t be there if an offense runs three or four deep routes on a play.

In that case, the free safety will be forced to cover the middle deep zone himself and won’t be able to chip in and help the cornerbacks.

A Cover 3 defense is an alignment that should be in every defensive coach’s repertoire, no matter what level of experience you’re coaching.

That’s because it is one of the most basic zone formations around and one that’s good against both the pass and the run.

Which means a coach doesn’t have to run on and off the field different personnel depending on whether he thinks the offense will run a pass or a run.

The Cover 3 defense can also be installed with many variations, including different blitzes and various forms of the zone coverage that can keep the offense guessing.

However, the Cover 3 defense isn’t without its shortfalls…

Like any defensive formation, there are intricacies that an offense could exploit.

It’s very important that each linebacker and player in the secondary stays disciplined, reads plays well, and doesn’t give into play-action passes or other misdirection plays…

Otherwise it could open up significant holes for the offense to exploit.