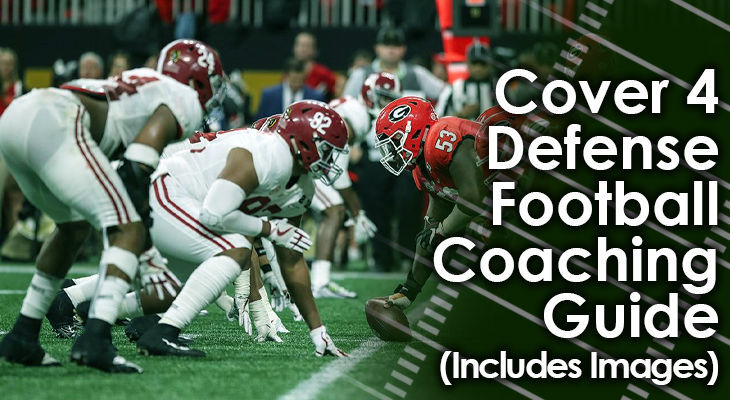 The Cover 4 defense is often referred to as the “Quarters” alignment, because each member of the secondary is responsible for a quarter of the field on the deep section.

It’s a four-deep, three-under zone defense in which the three linebackers are responsible for splitting the underneath section of the field into threes.

While the cornerbacks and safeties are responsible for splitting the field into fours on the deep section of the field, from sideline to sideline.

It has been used for many years by defenses at all levels to protect against the deep passing plays, but also as a read-and-react alignment against shorter passes and running plays.

There are plenty of wrinkles that can be deployed out of the Cover 4 alignment, but the zone principles remain the same no matter what personnel is on the field.

As with other zone defensive alignments, the Cover 4 defense relies on four down linemen rushing the line of scrimmage, with either three traditional linebackers or two linebackers and a nickelback, along with two cornerbacks and two safeties.

Who Should Use the Cover 4 Defense? ​The Cover 4 defense can be run by just about any team, no matter what level of experience.

Like other zone defenses, the Cover 4 is great to implement as a teaching tool of zone responsibilities to new players.

However, it’s also a defense that has staying power...

As you go higher up the experience ladder to high school, collegiate, and even the professional ranks, the Cover 4 defense can be very effective as coaches begin to implement new wrinkles and play calls to keep offenses on their toes.

It’s Simple - The Cover 4 defense doesn’t require any one defender to have multiple responsibilities or to have too much to worry about. On any given play, each player is responsible for a zone on the field, and whoever enters that zone is their responsibility.

It’s Versatile - The Cover 4 defense can also be modified for any experience level to implement extra wrinkles, blitzes, and even different personnel depending on the game situation or the team a defense might be facing.

It Covers All Zones Well - While it is considered a four-deep defense, the Cover 4 defense can also provide a blanket across the shorter passes, as long as the defensive personnel has the ability to read, react, and provide help.

No One’s On Their Own - One of the best parts about a Cover 4 defense is that while each player has his own zone of coverage, each position can also provide support to another position once the ball is snapped.

Could be Susceptible to Play Action - Since the safeties are tasked with reading the play first and then reacting in coverage, offenses could find some room deep on the field by using play-action passes.

Could be Susceptible to Shorter Passes - Offenses that can effectively run stop routes, curls, or short crossing routes over the middle could find some available space. That’s because the cornerbacks in a Cover 4 defense line up off the line of scrimmage most of the time, leaving a lot of space in underneath routes.

Could be Susceptible to Speed - Offenses that have speedy wide receivers, running backs, and even tight ends could find mismatches against this alignment that relies heavily on its linebackers to quickly cover the outside zones of the field.

How to Run the Cover 4 Defense Defensive linemen in a Cover 4 scheme are tasked with putting as much pressure in the backfield as they possibly can.

They’re asked to run straightforward, blowing up as many offensive linemen as possible and causing as much disruption as possible on every single play.

Blitzes are utilized more frequently in a Cover 4 defense than a Cover 3 or a Cover 2 zone defense because some wrinkles in the alignment could include subbing out one of the outside linebackers for a nickelback, as we’ll discuss in a bit.

However, the four defensive linemen in this formation are often the only players tasked with putting pressure on the line of scrimmage.

That makes it imperative that the defensive linemen are able to make a strong push at the snap of the ball.

The two defensive tackles in a Cover 4 defense will line up anywhere between the offensive tackle and the center.

There are two defensive ends on the field in a Cover 4 defense. They’re lined up either on the offensive tackle’s outside shoulder or over the tight end if there is one on the field. There are three linebackers on the field in a base Cover 4 defense:

The primary duty of each of these players is to cover the underneath zone on the field, which stretches sideline to sideline from the line of scrimmage to a depth of about 10 yards back.

Each linebacker is responsible for a third of the field width wise.

The Mike will often encounter wide receivers running crossing routes or tight ends releasing from their stance on the line of scrimmage to run crossing routes, stop routes, or hook routes over the middle third of the field.

The two outside linebackers each have responsibilities for the flat – the area where the two cornerbacks will leave void at the snap of the ball.

Both the Sam and the Will also often encounter running backs running routes out of the backfield in their zones, or even wide receivers flanked outside who run shorter routes toward the outside of the field.

One of the more popular wrinkles to a Cover 4 defense happens with the linebackers, especially in obvious passing downs.

Some defenses will substitute the Sam linebacker for an extra cornerback, or nickelback in this case, to help with the coverage of the outside underneath zone when offenses bring four wide receivers onto the field.

That extra speed and extra routes run make it difficult from a Sam linebacker to cover, and so defensive coaches may adjust by bringing this nickelback onto the field in place of a third linebacker. The four defenders in a Cover 4 alignment are responsible for covering the deep zone, split into quarters from sideline to sideline.

This zone starts about 10 yards off the line of scrimmage and continues from there until the end zone they’re defending.

It’s extremely important in a Cover 4 defense that no defender allows a receiver to get behind.

Because of the need to drop deep into coverage at the snap of the ball, a lot of Cover 4 plays will have the cornerbacks line up off the line of scrimmage about five to seven yards back.

This gives them a head start on backpedaling to their deep zone on the field.

While some Cover 4 plays will utilize more of a press coverage, where the cornerbacks line up closer to the line of scrimmage, this is mostly done at more advanced levels that have cornerbacks who are experienced running stride for stride with receivers.

The free safety and strong safety in a Cover 4 defense begin the play about 10-15 yards off the line of scrimmage.

Because they’re already lined up at the depth of the deep zone, the safeties’ first step is more than not a “flat step.”

Instead of taking a step back or a step up at the snap of the ball, the safeties are told to just get out of their stance and read whether it’s a run play or pass play before making a move.

If the offenses runs less than four deep routes on any play – and this happens a lot – one or both of the safeties can shade their zone coverage to the side of the field to provide extra support for the cornerbacks.

Or they can shade forward to provide extra help in coverage for the linebackers at the underneath zone.

When this happens it’s especially important that the safeties don’t misread a play, because if they do and a receiver gets behind them, a big play could be there for the taking for the offense.

A Cover 4 defensive alignment should be in just about every team’s playbook in some fashion.

It’s a simple defense to teach and roll out and it protects against deep passes and big plays.

Each player on the team is responsible for a zone on the field which means they don’t have to worry about making too many reads at the snap of the ball before they know what their responsibilities are.

Teams at more advanced levels, especially in college or the professional ranks, can also deploy a lot of wrinkles to the Cover 4 defense.

This includes substituting the Sam linebacker for a nickelback in situations where the offense might have more wide receivers on the field, to having cornerbacks play press coverage on receivers to make it harder for them to separate at the line of scrimmage and run their routes effectively.

No matter what version of the defense is run, the Cover 4 is an excellent option for any team looking to keep the ball in front of them and limit the number of yards an offense has the ability to gain on any one play.