What is a Curl Route in Football? (Full Explanation) 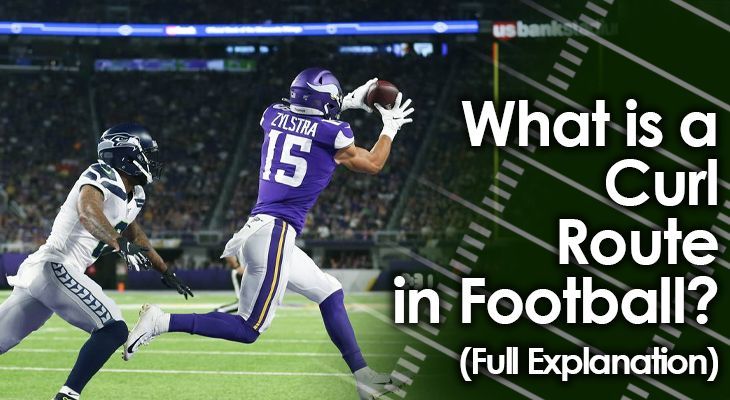 The Curl route is one of the basic passing routes on the route tree.

It is a mid-range-depth passing route that’s designed to result in a relatively easy completion for the offense.

It's not meant to necessarily gain a lot of yards, or result in a huge game-changing play.

Instead, the Curl route is meant to keep the ball moving down the field.

The Curl route is simple to teach, but it takes a very precise route-runner to execute it well.

It’s the exact opposite route of a Comeback route (as we'll soon see), in terms of the final execution of the route.

When used in combination with certain other routes, the Curl route can be a very difficult passing route to stop.

Even though an offense may not gain 20-plus yards with a Curl route, even 5-7 yards at a clip will prove to be very successful.

Let's take an in-depth look at what the Curl route is and how to run it.

The Design of a Curl Route The Curl route is a basic passing route that's run in toward the middle of the football field.

Because of how the Curl route ends up, it's often run by inside receivers instead of those lined up closer to the sidelines.

You may see the Curl route referred to as the Stop route, because it entails the receiver running to a certain point on the field, then stopping and "curling" to the inside.

This is where it gets its formal name from, obviously.

An offense will most often use Curl routes to move the ball down the field methodically.

It’s a relatively quick-hitting route that requires defenders to backpedal furiously, only to stop and try to change direction to keep up with the receiver they're covering.

Receivers running a Curl route have a distinct advantage knowing that they are going to be stopping their sprint and coming back toward the line of scrimmage to end the route.

Defenders, meanwhile, will have a much tougher time stopping their backward momentum, as long as the receiver disguises what he is going to do.

Offenses can use a number of different routes in combination with the Curl to attack the defense at different levels.

Quite often, an offense will run Curl routes with inside receivers while running routes that end toward the sideline for outside receivers.

These complementary routes could be a Comeback (which is just a Curl route except ended toward the outside).

This is done a lot if all receivers are running mid-range routes.

Offenses can also try to attack the defense deep on the outside with a Corner route, Out route or even a Go route.

The one thing that offense coaches should try to avoid is running other routes toward the middle of the field.

This could end up clogging the middle of the field with too many defenders, or even cause two receivers to run into each other. How to Run the Curl Route

The Curl route entails the receiver sprinting straight downfield, then stopping at a certain point and "curling" back toward the line of scrimmage in the direction of the middle of the field.

At the snap of the ball, the receiver should sprint as fast as he can in a straight line downfield.

The idea is to make the defender think he is running a deep route.

Then, when he gets about 5-10 yards away from the line of scrimmage, he needs to stop and curl back towards the middle of the field.

There are two keys to running an effective Curl route.

The first is not giving away the fact that you're going to cut off your route too early.

If the defender can see that you're slowing down or are about to cut inside, he can easily jump the route, resulting in either an incomplete pass or an interception.

The second key is stopping your momentum and quickly cutting to the inside of the field. This will take a lot of agility.

A receiver should chop his feet quickly to stop his momentum.

Then, he needs to plant his outside foot, push off and make his way back toward the middle of the field.

In making this move, the receiver should end up running back toward the line of scrimmage slightly.

He shouldn't cut on an angle away from the line of scrimmage or run horizontally down the line. His cut needs to bring him back toward the quarterback.

This is why the Curl route needs to be broken off at least a yard or two deeper than where the receiver wants to end up.

For example, if the offense needs to gain 5 yards for a first down, the receiver should run the first part of the Curl at least 7 yards downfield.

This way, when he cuts back a yard or two, he'll still be beyond the first-down marker when he catches the pass.

As soon as the receiver makes his cut, he should turn his head directly toward the quarterback and expect the ball to be thrown his way.

The quarterback will be taught to throw the ball when the receiver is just hitting the top of the Curl route.

If the quarterback waits too long, the receiver will end up running back too close to the line of scrimmage.

The other likely result of waiting too long is allowing the defender to adjust and cover the receiver.

The Curl route is a basic passing route, one that all youth football players should be taught.

It's a relatively easy route to understand and grasp the basics of.

However, it takes a lot of practice and precise route-running to perfect.

The Curl is one of the most popular routes for youth offensive coaches to call because it's an easy way for the offense to move the ball down the field.

Practice running it over and over again, and you'll soon be able to catch a lot of passes and gain a lot of yards.