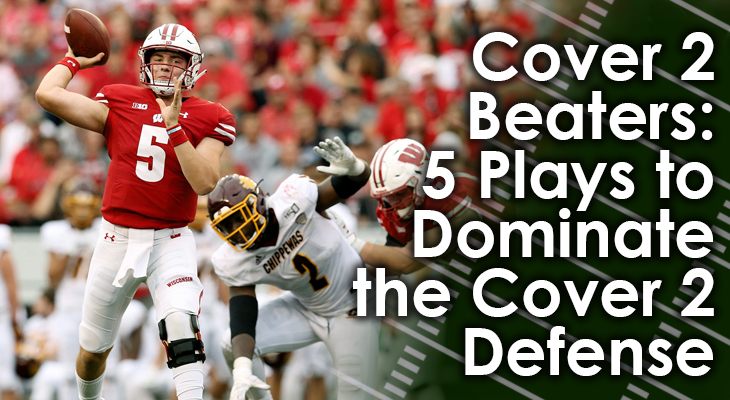 The cover 2 defense is one of the most popular defensive schemes in all of football.

While it was rarely used 30 years ago, teams now deploy it in all different fashions at every level of the game.

The reason why so many defenses are using some version of the Cover 2 Defense is quite simple -- it's very effective.

It simplifies the game for many members of the defense and covers many of the passing routes that are typically easier to convert.

As such, offensive coaches often pull their hair out trying to beat the Cover 2. But as with anything, there are ways that you can beat it.

Below I've included 5 "cover 2 beaters" to assist your offense, and then I'll give a quick overview on how the cover 2 works below that.

Once you understand the Cover 2 scheme, you'll understand how it's difficult to beat.

If run properly, the Cover 2 defense has just about every area of the field covered.

The only major downfall of the defense -- on paper, at least -- is it could give the quarterback extra time to find an open receiver if the pass rush doesn’t penetrate the offensive line.

Regardless of whether that happens or not, here are 5 plays you can run to help your offense dominate the Cover 2 defense. 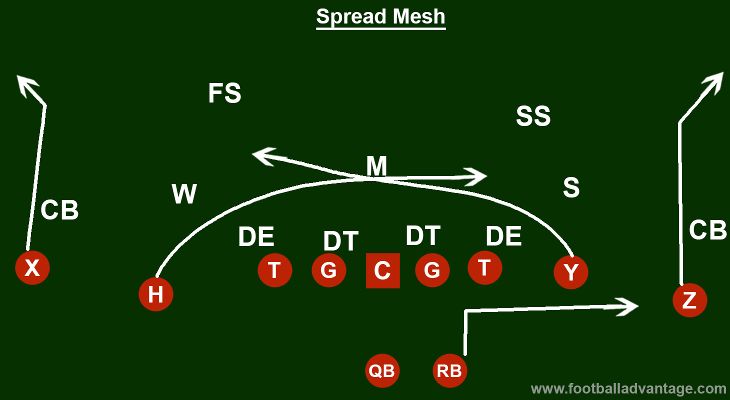 This play will engage both deep safeties with deep routes by the outside receivers toward the sideline.

Both the X and the Z will run Deep Corner routes, which should draw the safeties deep and away from the middle of the field.

The H and Y receivers will run Shallow Crosses to the opposite side of the field where they lined up.

They should get a depth of about 5-6 yards from the line of scrimmage on their routes.

The goal here is that they will almost make contact with each other in the middle of the field, causing defenders to potentially run into each other, or at least have to adjust their path as they try to keep up.

The depth on these routes will be enough to be behind the cornerbacks but way in front of the safeties.

And since the safeties had to go deep, the outside of the field should have plenty of room for either of these receivers to run with the ball after the catch.

The running back will serve as the safety valve and run a flat route to the right. 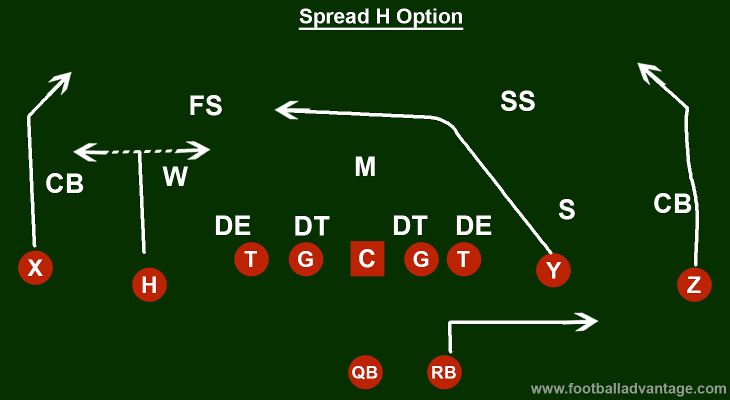 This will allow him to make the decision as he's running his route whether he'll break to the outside or the inside, depending on where he sees an opening.

This route will require timing and being on the same page with the quarterback, but it can be great if executed properly.

The goal here is to draw a lot of the deep coverage toward the middle of the field.

This will give more running space to the H, who is the primary target.

To do this, the X and Z will both run a Deep Post toward the middle of the field, drawing the safeties deep.

The Y will run a Deep Crossing route, attracting attention from all three linebackers in this case.

The H will start his route by sprinting about 6 yards downfield. He'll then scan the field and either run an Out or an In route, depending on how the other defenders react.

He should go to where he sees the open space on the field.

The running back will again run a Flat route to the right and serve as the safety valve for the quarterback. 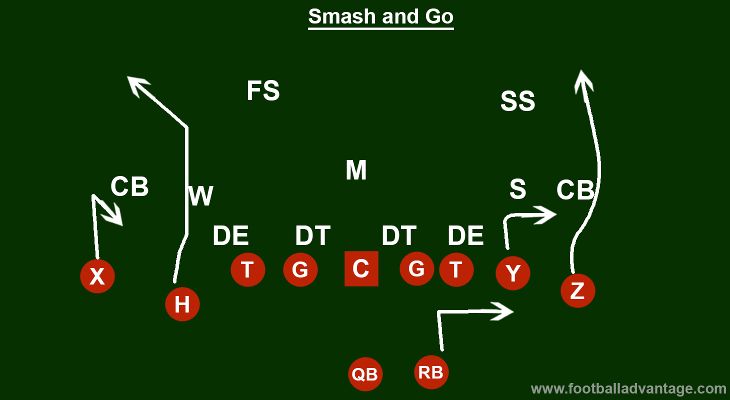 Another great way to beat the Cover 2 is to use the Smash concept.

This involves running both a high and a low route toward both cornerbacks.

This will force them to make a decision as to whether to drop back deep to cover the deep route, or stay shallow to cover the shorter route.

This is a combination concept that will involve the inside and outside receiver on each side of the field.

On the left, the X will run a Quick Hitch route while the H will run a Deep Post route.

On the right side of the field, the Y will run a Quick Out route while the Z will run a Go route toward the sideline.

The running back will serve as the safety valve again.

The idea is that if the cornerback stays shallow, it will be very hard for the safeties and outside linebackers to catch up to the deeper routes.

If the cornerback goes deep, it'll be very difficult for the outside linebackers to catch up with the shorter routes, since they'll have to run so far.

The Mike is rendered basically useless in this play call, since no one will be running a crossing route or a deep route down the middle. 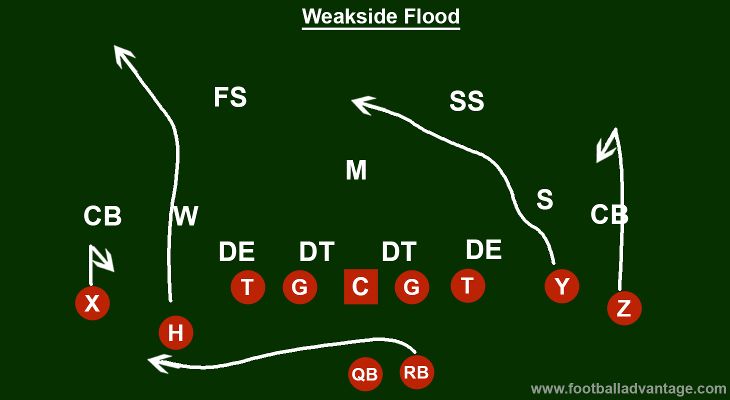 Another concept is to "flood" the weakside of the field by running at least three passing routes that way.

In this case, three of the four receivers will run their routes to the weak side of the field.

The running back may also run his route to the weak side as well.

The only receiver who will run a route to the other side is the Z.

It's best to run his route not too deep, as that will make it easy for the strong safety to decide to stay on that side of the field.

The goal here is to entice the strong safety to follow the Y.

If he does this, it will leave the deep right side of the field open for the Z.

If you call a passing route for the Z that has him "sit down" in the open zone beyond the cornerback but in front of the strong safety, there could be tons of room for him to run.

The Z can run a mid-to-deep Out, In or Hook route -- again, his goal is to "sit down" in that empty zone. 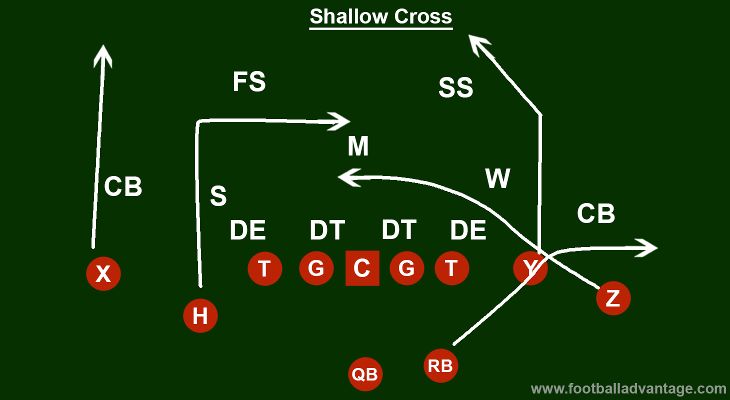 Another great play to beat the Cover 2 involves having multiple receivers cross paths on their route.

This will confuse defenders, as they'll have multiple players cross in front of their eyes, which could throw them off.

The goal is to draw the safeties deep with two deep routes, then tuck the H in the middle of the field just beyond the Mike's coverage zone.

You'll do this by having the X run a Go route, the Y run a Deep Post and the H run a Deep In route.

At the same time, the Z will run a Shallow Cross toward the left side of the field.

He'll be crossing the path where the Y lined up pre-snap.

The running back will also run a Quick Out route to the right that he'll drag just a bit and round off. He'll also cross the exact spot where the Y lined up.

In this scenario, the Sam and the strong-side cornerback will have three players cross into their paths very quickly.

This could throw them off and confuse them as to where they should go, leaving plenty of empty space for receivers to roam. 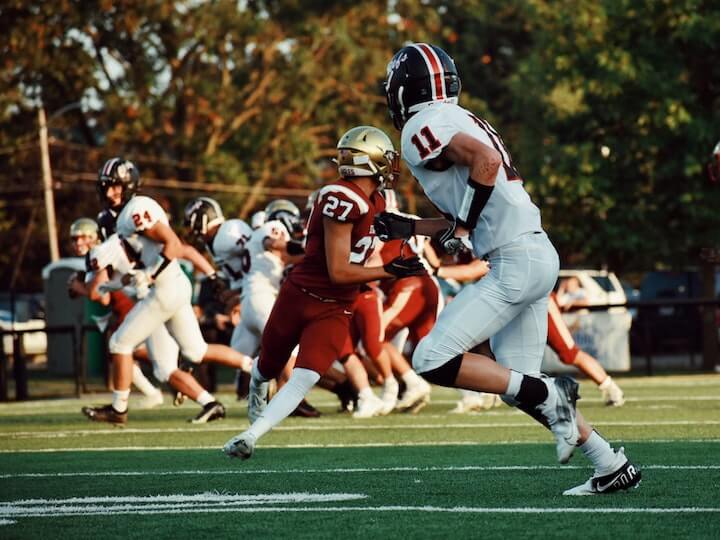 The Cover 2 Defense is a zone defensive scheme that teams can run both out of a base package and out of sub-packages such as the nickel and the dime.

Four defenders will be rushing the quarterback, while the remaining seven will drop back into coverage -- with the exception of blitzing plays.

What this overall scheme does is make it very hard for receivers to find open spaces on the field to run and, as a result, makes it challenging for quarterbacks to complete passes.

The basis of the Cover 2 is having two defenders drop back into the deep part of the field, leaving the "under" section to the other five defenders.

Some versions of the Cover 2 will use the middle linebacker (known as the Mike) to cover the inside vertical section of the field, with both safeties combining to split the deep portion of the field in thirds.

This, then, leaves the underneath coverage area to both cornerbacks and both outside linebackers, who will split their section into quarters.

In a typical Cover 2 defense, the cornerbacks will align near the line of scrimmage, pressing and then jamming receivers at the snap of the ball.

This makes it more difficult for them to release off the line of scrimmage, and knocks them off their route.

After executing the jam, the cornerbacks then release on a 45 degree angle, protecting and cushioning the safety on their side of the field, and reacting to all throws to the flat.

They'll drop back about 10-12 yards and stay between the hash marks and numbers on the field.

They'll be responsible for reading the quarterback after they reach their designated spot on the field, and then cheating to step into possible throwing lanes.

The four down defensive linemen will need to be great pass rushers in a Cover 2, since they're the only players who will put pressure on the quarterback.

Of course, defensive coaches will still call blitzes out of Cover 2 to bring extra pressure, though not as often as out of different defensive schemes. 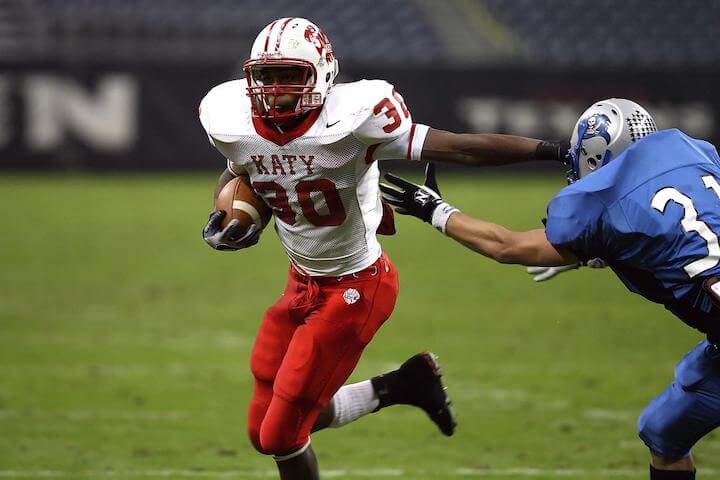 The Cover 2 defense is one of the most commonly-called defensive schemes in football, and for good reason -- it's simple to teach and it works.

Offenses have a tough time beating this defense on a consistent basis, which is why it forms the base defense for many teams.

However, it can be beaten and the plays listed here are just five of the best plays to beat the Cover 2 defense.

What is a Trap Run in Football? (Full Explanation)