What is an Out Route in Football? (Full Explanation) 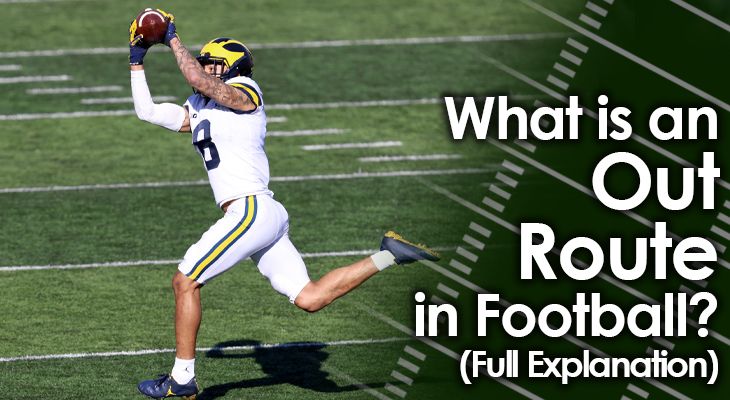 An Out Route is one of the basic passing routes all football receivers learn.

It's a relatively simple route to teach, but it takes a lot of skill, practice, and precision to run effectively.

The "out route" is a passing route that starts out looking like a deep route down the field, only to end up with the receiver finishing out toward the sideline.

In most cases, teams run the Out Route as a short passing route...

However, the beauty of this route is that teams can run it at multiple depths to accomplish different things. This fact will keep defenders guessing at all times, and having to make major adjustments on the fly.

Let's take a closer look at what it is and how it's executed from start to finish.

What the Out Route Looks to Accomplish

Exactly what this route looks to accomplish depends primarily on the depth of the route itself.

At shorter distances (between 5-10 yards off the line of scrimmage), it's designed to be a high-percentage route.

In other words, it's set up to make a relatively easy pitch-and-catch between the quarterback and receiver.

While this play won't gain a lot of yards, it will do what it sets out to do -- gain a few yards quickly, especially on situations such as third-and-short.

At longer depths, the Out Route can be turned upfield for much bigger gains.

In these cases, the receiver will run the normal pattern toward the sideline. Once they make the catch, they'll try to turn upfield to gain even more yardage.

There's also the possibility that it isn't run completely to the sideline. While the route will always end toward the outside of the field, it doesn't necessarily have to be right at the actual sideline.

In this case, it's a timing route between the quarterback and receiver where the goal is to simply get the ball in the receiver's hands outside the numbers on the field.

There are typically fewer defenders there, which gives the receiver the opportunity to gain extra yardage by making a move and juking the defender after the catch. 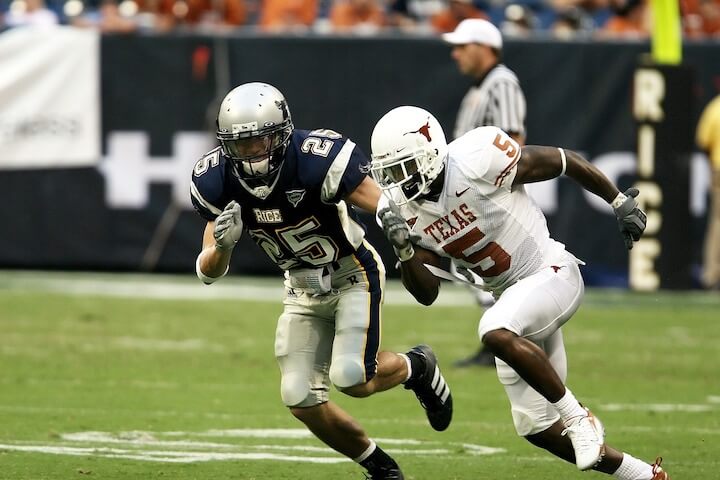 How to Run the Out Route

There are two parts to the Out Route, both of which are simple.

To be truly effective, receivers must execute their moves with precision.

At the snap of the ball, the receiver's first move will be to sprint straight forward downfield.

The goal at this point is to fake out the defenders, baiting them to think he's running a Go Route deep down the field.

Then, at the predetermined depth, the receiver will quickly stop, turn at a 90-degree angle, and sprint directly horizontal toward the sideline.

If the receiver lines up to the right of the quarterback before the snap, the route will end up near the right sideline, and vice versa.

The Out Route will never cross toward the middle of the field.

The breakdown in the route comes when it transitions from a Go to an Out.

To execute this properly, receivers must quickly chop their feet in short steps as they approach the break, which slows down their momentum a bit and allows them to make a cut safely.

Then, they must plant their inside foot and push off hard toward the outside of the field.

The plant and pressure must be on the outside of the inside foot if they want to be able to turn at a 90-degree angle.

The goal is to leave the defender in the dust as they make the turn, creating enough separation to make an easy pass completion.

Two Factors for a Successful Out Route

The first is how well the receiver fakes out the defenders.

Successful Out Routes will have defenders covering the deep pass only to get blown out once the receiver shifts directions.

The second is how well the receiver executes this sudden change in direction.

Receivers have to stop, pivot, and turn at a 90-degree angle quickly and precisely.

Doing so successfully will go a long way in creating enough separation for an easy catch (and possibly more yards).

The Out Route is a rather simple passing route in football, but when it's run properly, it can be extremely effective for the offense.

One of the best parts of the route is that coaches can run it at different depths to achieve different goals.

It can be a short route that converts a third-and-short, and it can also be a deeper route that can result in a huge play.

Either way, the Out route is one of the more essential routes every receiver in football should learn and work to master.