In recent years, some of the offensive and defensive systems developed in college football have made their way up to the NFL level.

It started with the spread offense and the read-option, which has found its way to just about every NFL team recently.

What has also made its way up the proverbial football ladder is the Cover 7 defense.

This defensive scheme was developed by legendary University of Alabama head coach Nick Saban, who is known for his defensive prowess.

He's a big fan of man-match defensive coverages and has implemented it at multiple stops in his career.

Cover 7 explains the overall breakdown of what the defense is, which is a man-match coverage that splits the field.

There are also plenty of checks and calls for the defense that allows the unit to adapt to various situations, tactics, and formations the offense might throw at them.

The Cover 7 can be a little complicated to understand, but when you break it down piece by piece, it becomes clearer.

Below, we'll run you through a full Cover 7 defense guide so you can better understand the scheme and decide whether you think it's a good fit for your defense.

Before diving into the Cover 7 defense, it's important to know some of the basic terminology used. Teams use these words and phrases throughout the defensive calls, and they mean different things.

"Split field" refers to the fact that the Cover 7 can technically have two different coverages for each side of the field.

The left side could have one cover matchup while the right side has another, for instance. This allows the two sides of the defense to work independently.

"Leverage" refers to where the defensive backs align themselves in relation to the particular receiver they are covering.

Again, keep in mind that this defense is man-match, so each defender will key in on a particular receiver.

Saban's Cover 7 defense has some of the positions named slightly different than usual:

You certainly don't have to adopt that naming mechanism for your version of the Cover 7.

You can still make us of the traditional names if that makes it easier for you and your players to understand.

The Cover 7 alignment looks like a typical Nickel defensive package. 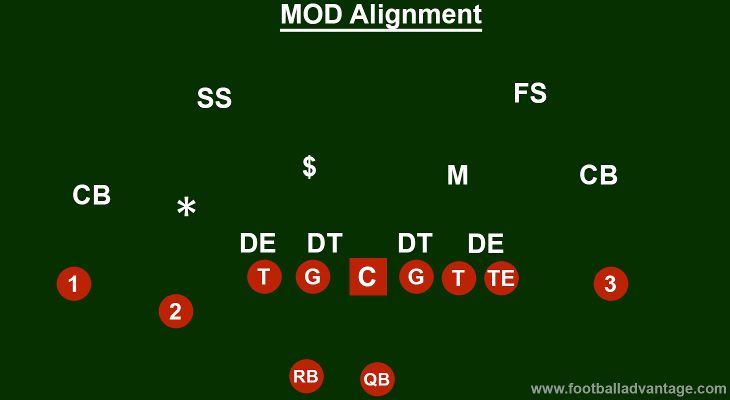 One different thing about this defense, though, is that the weakside linebacker will actually line up in the traditional Sam (or strong side) position.

In other words, if there is a tight end on the field, the Money will line up on the same side of the field as the tight end instead of the opposite site.

The "strong side" in this case is where the extra wide receiver is (in three-receiver sets) rather than where the tight end is.

All other defenders will line up in typical places on the field pre-snap.

There are a few main coverage schemes for the Cover 7, which we'll discuss below:

Main Outside and Deep (MOD) 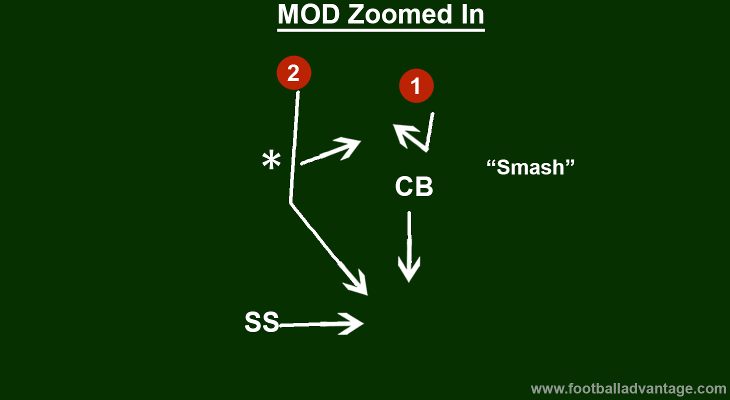 The MOD coverage scheme essentially means that the cornerback will have man coverage on the 1 receiver if he runs deep and outside routes.

If the 1 ends up running a route shorter than five yards, the cornerback calls "smash" or "under."

This call by the corner alerts the nickelback (or Star) to cover the 1.

The cornerback would then slide back into a zone for the deep quarter, looking toward the 2 receiver who could be running a route to the outside deep corner.

The safety on that side of the field, in this instance, would cover the if he runs a deep route, keeping inside leverage. 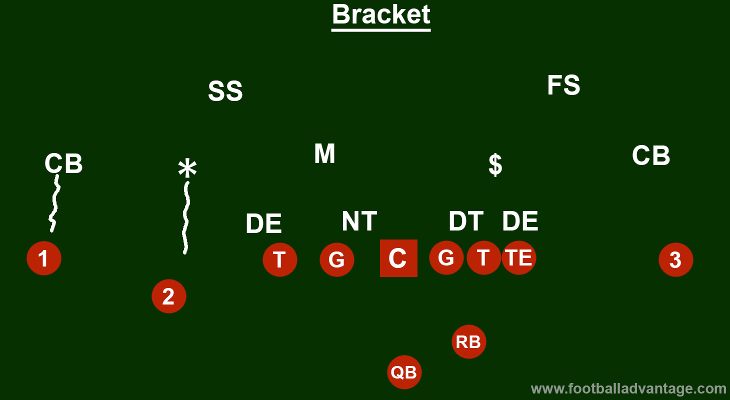 In this coverage, the cornerback will have what's called MEG, or "Man Everywhere He Goes," on the 1 receiver.

This essentially means the cornerback will stay in man-to-man coverage on the 1 receiver no matter what he ends up doing.

The Star keeps outside leverage on the 2, and stays on him no matter what… unless there's what's known as a "fast three."

The strong safety will help on a deep route between the 1 and 2 receivers, staying deep and not jumping on any underneath passing route.

The Mac will take the 3 receiver.

If the offense has the 3 receiver run an immediate Flat route to the outside, the defense can initiate a "push." This call is also sometimes known as the "fast 3."

In this case, he'll become the 2 receiver -- which, as explained above, will require the Star to jump on him and abandon the player originally labeled as the 2 receiver. 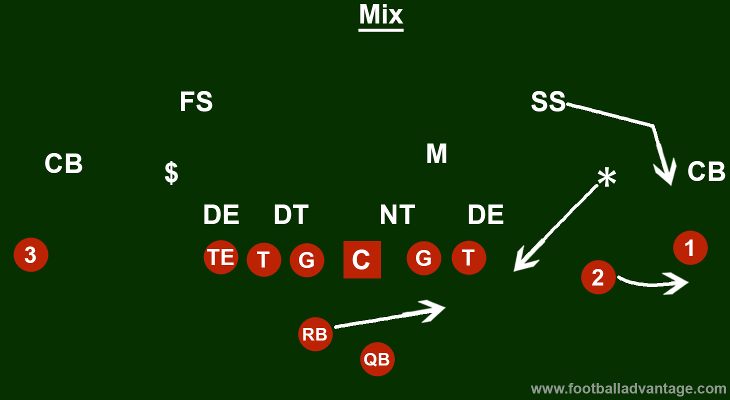 One downside of MOD and Bracket is that the defense can get outnumbered inside the box.

Defensive linemen will play as two gaps in Saban's Cover 7, but it's not always the ideal situation as they can sometimes be overpowered by the offensive linemen, especially in run coverage.

If this is happening, or if the play is likely to be a run, Saban may call the "Mix" coverage.

This will allow the nickelback to be more aggressive potentially against a run play.

This requires the strong safety to come closer to the line of scrimmage and cover the 2 receiver, even if he were to run a shorter bubble screen.

It's a long way for the strong safety to run, but it allows the nickel to chip in on run coverage much more.

Another scheme option is Clip, which works similarly to Cover 2.

There are more principles of man-match than there are of zone coverage in this scheme.

In this scheme, the cornerback will get inside leverage on the 1 receiver but will also look for any routes that the 2 or 3 receivers run to the outside. If no routes go to the flat, that corner will stick with the 1 receiver.

The Mac plays with those same rules, but on the 3 receiver instead of the 2.

The strong safety will stay deep to cover the top half on what's known as the "clip" side of the field. 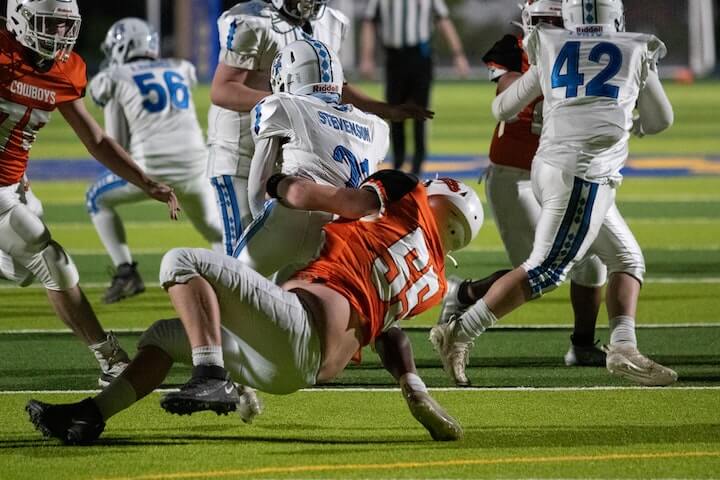 When is Cover 7 Effective?

a. When the QBs in Shotgun

The reason for this is that having a single back allows the offense to have three wide receivers, which is how the Cover 7 personnel matches up well -- with the nickelback on the field at all times.

Bigger offensive sets with one or two receivers and multiple tight ends and/or running backs could easily take advantage of weaknesses in the Cover 7.

Having two safeties on the field at all times gives the Cover 7 a lot of different opportunities to play combinations of zone and man-match.

And, as mentioned earlier, you can run different coverages on each side of the field, based on what the offense is throwing at you.

This is a major advantage of the Cover 7 compared to other coverage schemes, which typically have players run either zone or man-match -- not a combination of the two.

b. To Confuse the QB

It can be very difficult for a quarterback to pick up assignments on passing plays when the defense throws man-match on one side of the field and zone on the other.

If run properly, this can easily result in a lot of turnovers.

The quarterback may read the coverage as zone on one side of the field and expect a zone on the other side as well -- only to realize it's not the same on both sides.

If you want to fully understand the Cover 7, watch as many University of Alabama football games as you can.

You can also refer back to some of Saban's older teams, such as LSU and Michigan State -- though that was a while ago now, so there are likely some major differences in how it's run against today's modern offenses.

The Cover 7 defense is quickly becoming one of the most popular coverage schemes in college football and the NFL.

It provides coaches with a great opportunity to cause confusion for offenses and run a mix of man-match and zone coverages on the same play.

One of the downsides to the Cover 7, though, is that it can be difficult to teach and understand at times. Therefore, it may not be the best coverage scheme for youth football teams -- at least not in its full form.

But, study the Cover 7 in depth and see if you can take any of its principles to apply to your playbook.