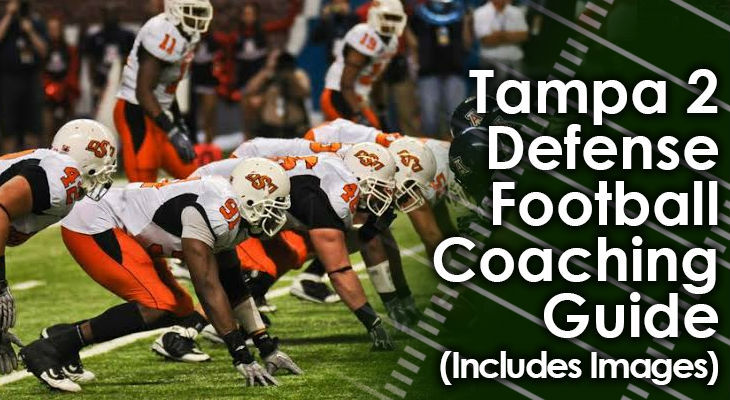 The Tampa 2 defense is a formation that is named appropriately for a specific team’s approach to defense.

Tampa head coach Tony Dungy and defensive coordinator Monte Kiffin created what is now known as the Tampa 2 defense as a way to modify the traditional Cover 2 defense for the West Coast Offense.

For those who don’t know, the West Coast Offense is a system that was designed to take advantage of holes in zone coverage areas often left open behind the linebackers by using quick crossing routes and play calling in the passing game.

Using principles he had learned as a defensive coach with the Pittsburgh Steelers, Dungy along with Kiffin employed some wrinkles to the base Cover 2 defense to better protect against, and attack, the NFL offenses at the time.

What resulted was one of the most feared and successful defenses of the NFL in the 1990s, one that eventually led to a Super Bowl victory in 2003, after Dungy left the Buccaneers for another job in the NFL.

It does not have to be deployed simply as a scheme in certain passing situations or against certain offenses.

Who Should Use the Tampa 2 Defens​e? 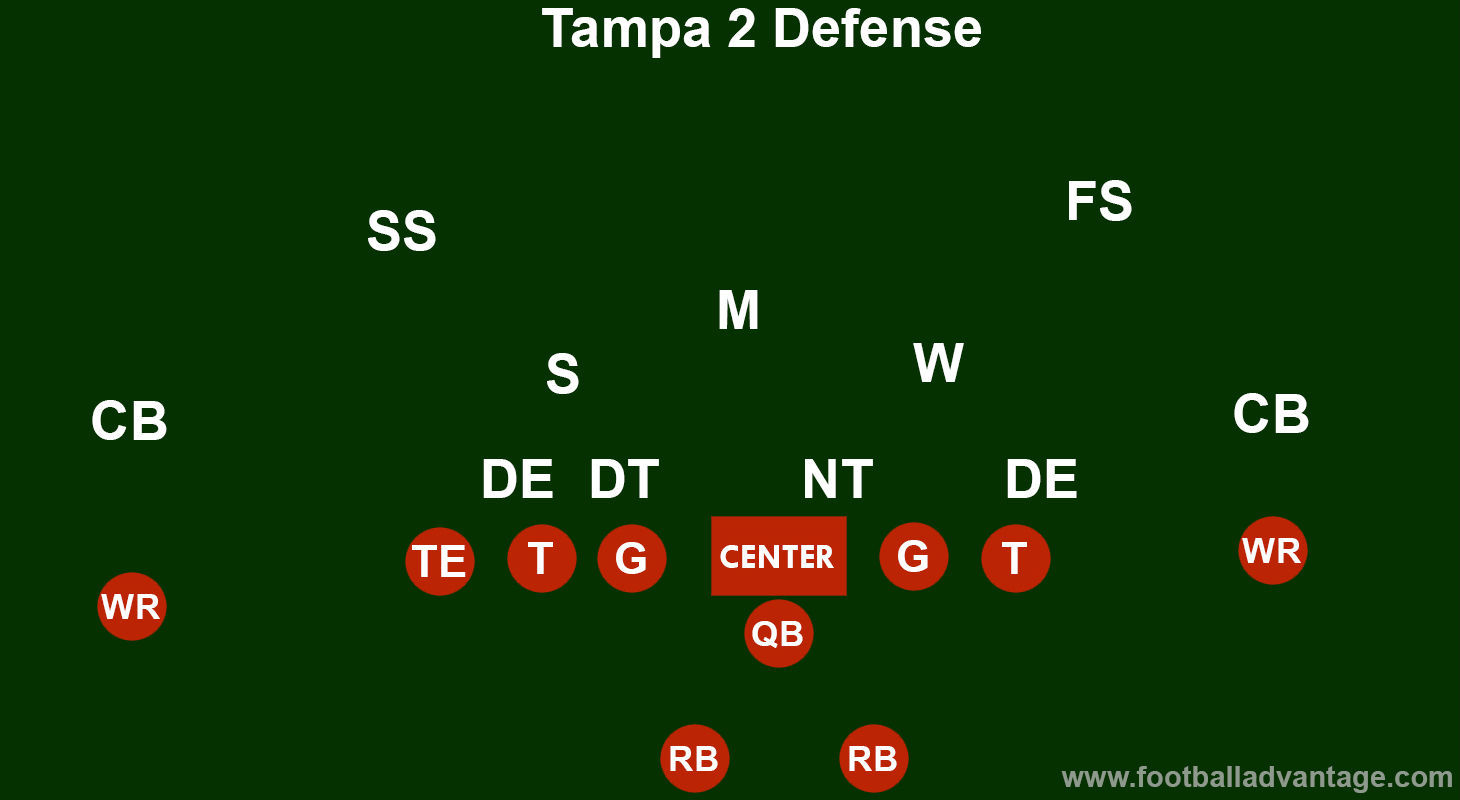 The Tampa 2 defense can be used by just about any football team at any level, in any situation.

That’s because, in reality, it’s just a base formation that employs traditional personnel with basic responsibilities.

The Tampa 2 defense is a great one to teach youth football teams because it is simple to learn, and can be effective against both the pass and the run.

In fact, most of the defenders will look to read a running play first, and then react to other zone coverage responsibilities if the play is a pass.

It’s Simple - The Tampa 2 defense may sound like an intricate alignment, but it’s actually quite simple. In reality, it’s the Cover 2 defense with a few wrinkles in terms of coverage responsibilities against the pass. Yes, the Tampa 2 defense can get quite complicated, but it doesn’t have to be.

It’s Versatile - The Tampa 2 defense was designed to defend against the passing plays of the NFL West Coast Offense. But while that may make you think it’s only good against the pass, it’s also very stout against the run. That’s because it can be run as a base defense, and because players are taught to read run first, and then make adjustments if the offense runs a passing play.

It Covers All Zones Well - The middle depth of the field is blanketed by two cornerbacks and two outside linebackers at all times. And the deep zone is covered extensively by the middle linebacker and the two safeties on the field. This not only reduces the amount of open space on the field, but it also provides plenty of extra coverage and tackling protection from three of the more versatile players on your defense.

It Can Be Confusing - If your team has the basics of the Tampa 2 down pat, then you as a coach can start to implement various different wrinkles to the defense to apply extra pressure. This could include stunts and slants along the defensive line as well as blitz packages that could include linebackers, cornerbacks and safeties rushing the line of scrimmage to cause havoc in the offensive backfield.

Could Be Easy to Read - Teams that run the Tampa 2 as a base defense and that don’t deploy a lot of wrinkles in the play calling could be allowing the offense to read the play with ease. That’s because in the base formation, each player will have the same basic responsibilities from play to play. So the key to a Tampa 2 defense is implementing at least some different packages or blitzes quite often.

Could Be Susceptible to Shorter Passes - While the Tampa 2 defense was designed to stop the passing of the West Coast Offense, it could be susceptible to passing plays over the middle if a less experienced defensive team can’t get to their zones. The middle linebacker is asked to drop back far from where he lines up, and the outside linebackers must slide to cover the void on the inside. So a smart offense with speed receivers could take advantage of this by running quicker, shorter passing plays to take advantage of the space left free.

Misdirection Plays Could Work - Because defensive players are asked to first read run and then react to pass, this could make it susceptible to misdirection plays. This is especially true if an offense is able to establish some sort of running game, and then works in play-action passes. If the offense can get a linebacker, cornerback or safety to bite on a fake running play, then there could be a lot of daylight for a big gain in the passing game.

How to Run the Tampa 2 Defense 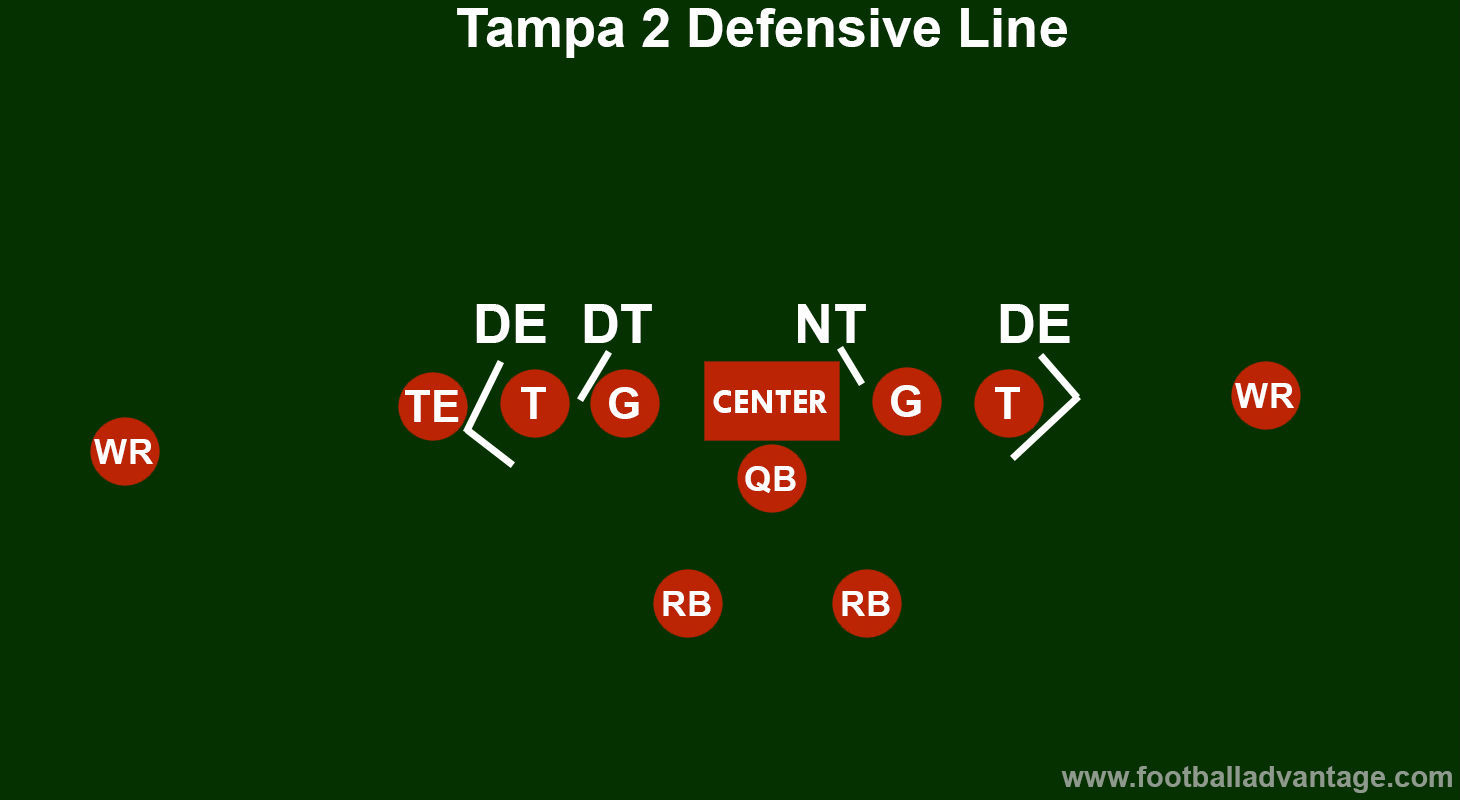 The defensive line in a Tampa 2 defense will employ a nose tackle, defensive tackle, and two defensive ends.

The defensive tackle will almost always line up in a 3 Technique, which means on the outside shoulder of the offensive guard.

The nose tackle on the other side of the line will line up usually in a 0-2 Technique, from heads up on the center to the inside shoulder of the other offensive guard.

Typically speaking, the nose tackle will be considered more of the run stuff and the gap filler.

He will be responsible for plugging the A gap on his side of the field and attempting to clog up the center and offensive guard on every play.

The other defensive tackle is more of a pass rusher type who can get into the backfield quickly and effectively through the B gap.

This goes for passing plays and running plays.

This defensive tackle’s responsibility is to wreak havoc in the backfield.

The defensive ends line up in at least 5 Techniques, on the outside shoulder of the offensive tackle on their side of the field.

If a tight end is on the field for the offensive, the defensive end might also slide even further out to the inside shoulder of the tight end for alignment purposes.

The defensive ends are considered edge rushers in a Tampa 2 defense.

Their job is to get into the backfield on the outside of the offensive tackles.

In the running game, their job is to collapse the line of scrimmage and force ball carriers on run plays to make a move, hopefully toward the inside of the defense. 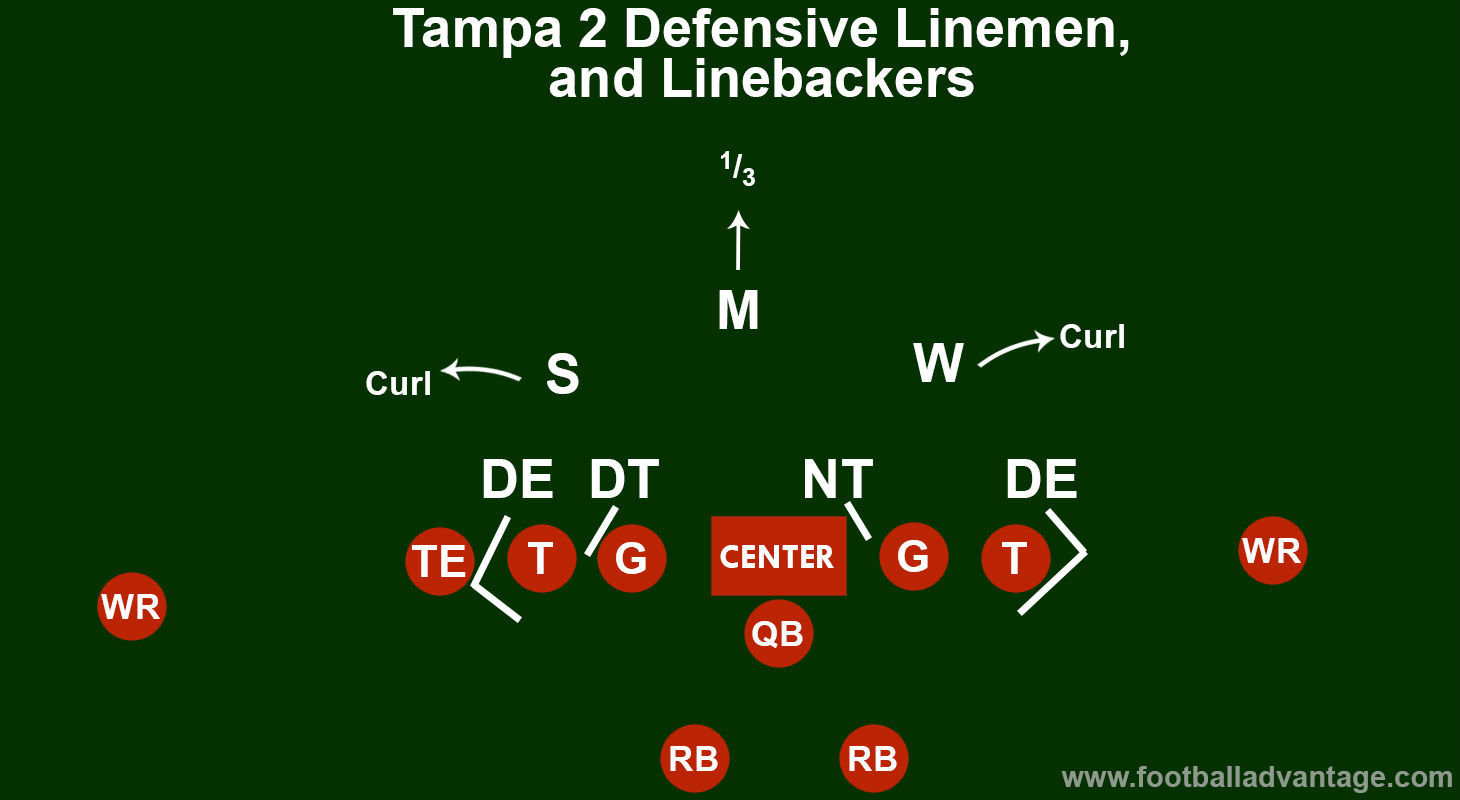 The Tampa 2 defense will have a Mike, Sam, and Will linebacker on the field at all times, much like in a traditional Cover 2 or 4-3 base defense.

Their alignments will differ slightly from both of those formations, though.

That’s because the Mike’s responsibility in coverage will be the deep zone, while the Sam and the Will won’t have to drop back as much.

Another big difference between the Tampa 2 and other similar formations are that the two outside linebackers will be primarily responsible for the open gaps along the line of scrimmage on running plays.

It will be the Sam and Will’s responsibility to cover the B and C gaps at the line, while the Mike will more often be the support tackler, identifying where the holes are and where the ball carrier is going before making a move to attack the line of scrimmage.

Passing coverages out of the Tampa 2 are always a zone coverage.

That’s the entire idea behind the formation.

Once the linebackers recognize that the play is a pass, they will all drop into coverage at different depths.

The Mike in a Tampa 2 must be quick and have the ability to drop back into coverage.

Once he reads that a play is a pass, he must drop straight back about seven yards to cover the middle third of the field.

Their job is to curl to the quarter of the field that they will cover in tandem with the two cornerbacks.

While the personnel in the secondary of a Tampa 2 defense will be the same two cornerbacks and safeties as in the Cover 2 and 4-3, their responsibilities are slightly different.

There will be no man-to-man coverage out of this formation, so the secondary is more focused on covering their zones, providing extra support, funneling runners inside, and occasionally blitzing as well.

The cornerbacks will line up across from the wide receivers and covering the outside quarter of the middle-depth zone, in the same vicinity as where the Sam and Will linebackers will be.

The cornerbacks in a Tampa 2 defense are asked to play a little more physical than they might be in a normal Cover 2.

They are asked to get a good jam on the wide receivers once the ball is snapped, to make it harder for the receivers to get off the line of scrimmage, and to give time for the linebackers and safeties to properly get into place in the zone.

On running plays, the cornerbacks’ primary responsibility is to funnel the runners to the inside of the field and let no one get outside of them.

The free safety and strong safety will align themselves at the same depth between outside linebacker and cornerback from left to right.

On pass plays, they drop back into a coverage that is actually similar to the Cover 3.

That is, they cover the outside third of the field at a depth of about 10-15 yards, with the Mike handling that inside third.

The safeties will provide over-the-top coverage support for both the cornerback and outside linebacker on their side of the field, as well as keep an eye on tight ends, running backs, and additional wide receivers who are running deeper passing routes.

On run plays, the safeties need to attack the line of scrimmage but be smart about doing so.

They will be the last line of tackling defense, and must first make sure that a runner doesn’t get outside a cornerback before they rush to the middle of the field.

Their primary run duties are a supporting role, so they can’t freelance too much on their own.

While the Tampa 2 defense was created by two of the brightest minds in recent NFL history, it’s a defense that has evolved over the years and can now be used in many different forms at many different levels of play.

The Tampa 2 defense is mainly just a wrinkle here and there from the Cover 2 defense, which means that it can be very simple to learn.

It’s also a good formation to run in both running and passing downs, too, because of the simple responsibilities that are placed on each defensive player on the field.

However, in order for the Tampa 2 defense to be run in its most effective form, defensive coaches will need to implement a lot of wrinkles and changes to the base formation, such as stunts and curls along the defensive line to blitzes with linebackers, cornerbacks, and safeties.

Still, the Tampa 2 defense is one that more and more defenses are utilizing in unique ways to cater to their specific team and skill level.