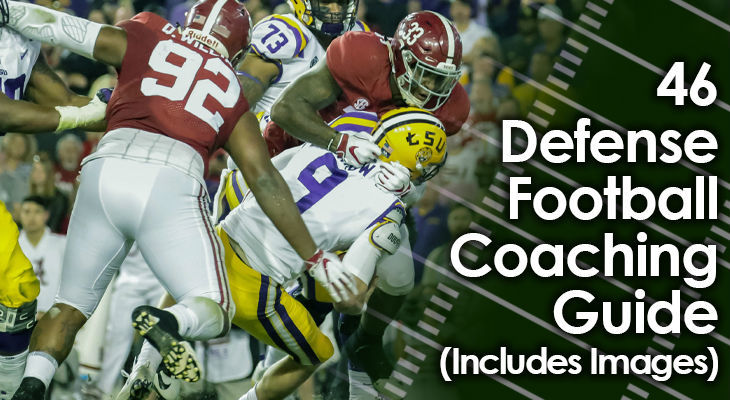 The 46 defense is perhaps the most famous alignment around.

That’s because it’s associated with possibly the greatest defense in the history of the National Football League – the 1985 Chicago Bears.

That team was a dominating force, with its defense helping to lead the team to a 15-1 record and a Super Bowl championship.

The Bears’ defensive coordinator at the time, the legendary Buddy Ryan, created the 46 defense as a way to put loads of pressure on the offense, stacking the line of scrimmage.

This made it impossible for offensive linemen to double team any defender and caused all sorts of havoc in the backfield.

Unlike other defensive alignments out there, the 46 defense is not named for the number of players at each level of the defense.

Instead, Ryan coined the term 46 defense because his strong safety on that Bears’ team, Doug Plank, wore number 46.

In reality, the 46 defense is an iteration of the 4-3 base defense.

There are four defensive linemen, three linebackers, and four players in the secondary in a 46 defense - but the difference lies in where they line up.

In addition to the four down linemen, one linebacker and the strong safety will both stack the line of scrimmage before the snap of the ball, putting extra pressure up front right at the beginning.

Who Should Use the 46 Defense? 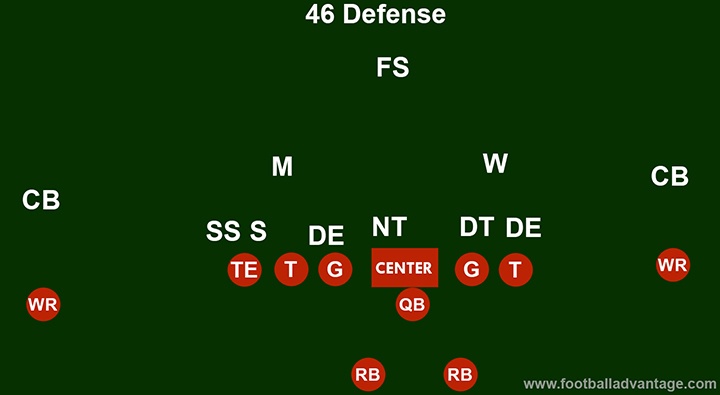 ​Based on the alignment alone, one might think that the 46 defense is only good at stopping the running game…

And therefore, would only be a good fit for youth football teams who defend the run more often, or for more advanced teams against run-heavy offensive formations.

But the fact that the 1985 Chicago Bears team is the one that made the 46 defense famous would suggest that one would be wrong if one made that assumption.

The 46 defense is just a 4-3 defense with a major wrinkle, and as such, it has many of the same strengths as the 4-3 defense does.

It’s not a hard defense to teach as a base defense, because the responsibilities are relatively simple and straightforward, as we’ll soon see.

At the same time, defensive coaches can get very, very creative with the 46 defense to keep offenses off balance even more.

Still, if you’re a coach at the youth level, you don’t have to be too scared by the notion that a professional football team made this defense famous.

The reality is that you don’t have to run the 46 defense to the same extent that the Chicago Bears did.

You can run a simpler iteration that could still make your team famous for its ferocious defense.

​Stacks the Line of Scrimmage - In addition to the four normal down defensive linemen, two other players – a strong safety and linebacker – will start each play at the line of scrimmage. This blocks the vision of offensive linemen and prohibits them from double teaming anybody.

Creates Confusion - How often do offenses see 6 defenders at the line of scrimmage before the snap of the ball? The answer is probably not very often. The 46 defense keeps offenses on their toes and makes them adjust their game to an alignment they probably haven’t seen too often.

Creates Pressure - 6 players will rush the line of scrimmage on just about every play, and that doesn’t even count times when the defense might decide to blitz another defender. On a lot of plays, there will be too many defenders for the offense to block.

Is Good in Any Situation - A The 46 defense is not just a run-stopping defense. While it’s definitely great against the run because of how many players stack the line of scrimmage, it’s also good against the pass. Five defenders will always be defending the pass, and one of the extra “defensive linemen” can always drop back into coverage, too.

​Susceptible to Crossing Routes - Since the amount of time quarterbacks have to get rid of the ball is less against the 46 defense, offenses often counteract that by running short passing routes. The extra two players at the line of scrimmage can open up space for receivers to find.

Hard to Fully Grasp - While the 46 defense can be implemented in a base formation without a lot of wrinkles, it is most effective when those wrinkles are implemented. The entire basis behind the alignment is that different defenders will do different things every play. This may be harder for inexperienced players to fully grasp and execute.

Could Be Thrown Against - The 46 defense was designed to create pressure, but if the offense is able to withstand that pressure, it could be a long game ahead for the defense. No pressure out of a 46 alignment is often a nightmare for the defense, as the offense can now pick apart the team that has only three players in the secondary.

Requires a Lot of Strength - The 46 defense asks a lot out of the two extra defenders who line up at the line of scrimmage. Defensive linemen are used to taking a pounding on every single down immediately at the snap of the ball, but strong safeties and outside linebackers are not. This could wear these players down over the entire stretch of the game if they’re not prepared for the extra physicality.

How to Run the 46 Defense 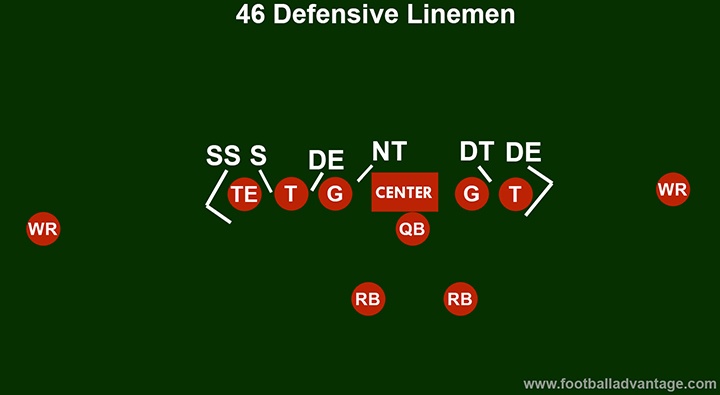 That’s because in addition to the nose tackle, defensive tackle and two defensive ends, the strong safety and Sam will align themselves at the line of scrimmage on every play.

So for the purposes of this breakdown, we’ll be dealing with six defensive linemen.

We’ll start with the alignment of all the players…

The nose tackle will line up directly opposite the center or shaded slightly to the strong side of the defense.

The strong side of the defense will see the defensive end move more inside than an end is used to and line up on the outside shoulder of the offensive guard.

As you can imagine with this alignment, that’s a whole lot of bodies up front.

But that tackle has quite the blocking task, as he could see intense pressure from either the defensive end or the Sam on any given play.

The main responsibilities for all the defensive linemen are to primarily attack, attack, and attack some more.

The nose tackle will have A gap responsibilities, most of the time to the strong side of the offense.

The weak-side defensive end will have C gap and outside contain responsibilities.

And the Sam and strong safety will have C gap and outside contain responsibilities, respectively, but that is done in tandem since they line up so close to one another.

With so many defensive linemen so close to each other, the 46 defense easily allows for defensive coaches to work in curls or stunts that would switch up the gap responsibilities and confuse offensive linemen even more.

In addition, it’s easy to drop either the strong safety or Sam back into coverage, either to allow the Mike linebacker to blitz or to provide extra protection against passing plays.

The 46 defense employs only two linebackers in the traditional sense.

With the Sam linebacker starting the play at the line of scrimmage, that leaves only the Mike and the Will in their traditional alignments with traditional responsibilities.

Both players will line up about five yards off the line of scrimmage, directly over the offensive tackles.

On running plays, the Will be responsible for covering the A gap on his side of the field. This is the only gap along the line of scrimmage that isn’t occupied by a defensive lineman in a 46 defense.

The Mike will read that it’s a run play and then move to fill any open space on his side of the field.

The strong safety and Sam will be funneling runners back to the middle of the field, so the Mike needs to see where any hole develops in doing so, and then fill that hole.

Most 46 defense run man-to-man coverage against the pass.

In this instance, the linebackers will be responsible for covering running backs out of the backfield or a tight end.

Zone coverage could be deployed as well, and in many of these cases, the strong safety might drop back into coverage to help out. 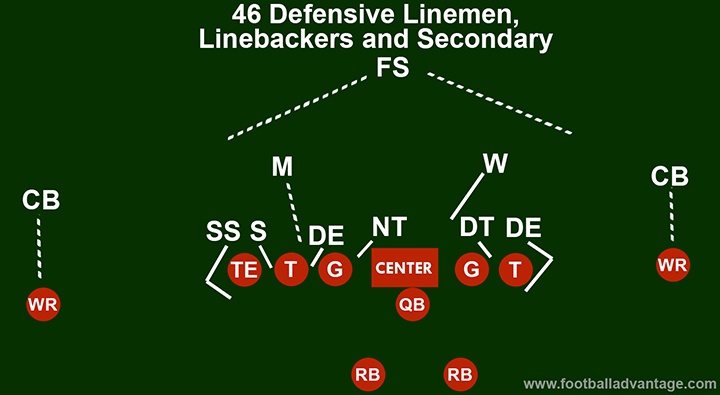 The secondary is also down a man in a 46 defense, with the strong safety at the line of scrimmage and acting more like a defensive lineman.

That leaves two cornerbacks and a free safety to cover the rest of the field.

The cornerbacks will line up over the wide receivers, with the free safety as the only man lined up deep.

Responsibilities for all players in the secondary are pretty simple and similar to what they are in other defensive alignments.

The cornerbacks will defend the receivers in man-to-man coverage or drop back and cover an area of the field in zone coverage.

On running plays, they will serve as outside protection, funneling runners back into the middle of the field where all the other defenders are waiting to make a tackle.

The free safety is really the key to the secondary in a 46 defense.

This player needs to be able to read plays quickly and effectively and react.

He may be required to run all over the field, too, so he should have a lot of speed and lateral adjustment ability.

On passing plays, the free safety might have coverage responsibilities over a tight end, but most of the time, he will be serving as extra help to the cornerbacks and linebackers.

On running plays, the free safety must approach the line quickly, with primary responsibility of making tackles or funneling a ball carrier inside if that ball carrier gets outside or past the other defenders.

​The 46 defense is one of the most famous defensive alignments around, as it was employed by what is considered one of the best professional defenses in history – the 1985 Chicago Bears.

Because of this, the 46 defense has been used in many different iterations at the professional and collegiate levels by coaches who wish to replicate its success.

But even though it’s a defense that was designed for the most skilled players at the most advanced level of the game, the 46 defense can still be used by youth football teams.

That’s because the alignment is really just a wrinkle on the 4-3 base defense, and so it uses many of the same principles and all the same personnel.

The 46 defense doesn’t require new players to be on the field – say an extra defensive lineman, linebacker of member of the secondary.

Instead, it just requires the normal stable of players to have slightly different responsibilities.

The key to a successful 46 defense is having a strong safety and Sam linebacker who can take the every-down punishment of playing close to the line of scrimmage, and the adjustment ability and awareness of a really good free safety.