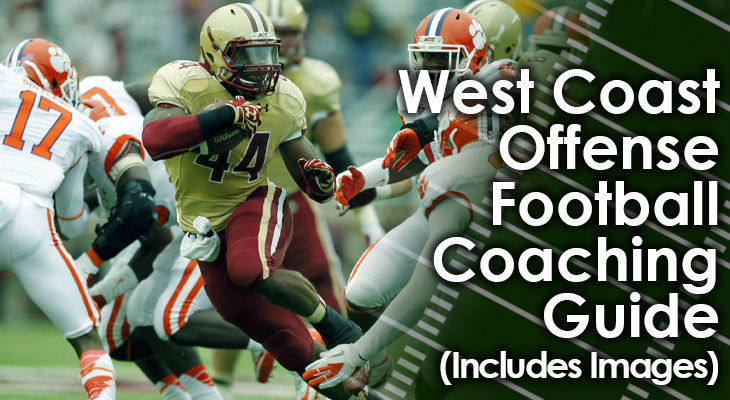 The West Coast offense derives its name from the location where its creator made his name.

Bill Walsh actually created the offense as the quarterbacks coach and play caller for the Cincinnati Bengals in the late 1960s.

Walsh became known as one of the greatest NFL coaches of all time after leading the San Francisco 49ers (and Hall of Fame quarterbacks Joe Montana and Steve Young) as their head coach.

Walsh created the offense in response to his quarterback getting injured in Cincinnati and being unable to throw the deep ball very often.

As a result, the Bengals’ offense relied more on short drops by the quarterback and quick throws spread out all over the field to force defenses to react quickly.

Eventually, Walsh expanded his “Nickle-and-Dime” offensive scheme and his career progressed, and as his quarterbacks were able to throw the long ball, too.

What the West Coast offense became famous for was those quick passing plays setting up the eventual long ball that took advantage of the defense over-compensating.

While the offense was created at the professional level, it’s simple enough in principle that offenses at most levels of football can utilize it.

Who Should Use the West Coast Offense?

​Teams That Have a Strong Arm - While quarterbacks will take only a three or five-step drop on passing plays out of the West Coast Offense, they will need to have a strong arm. That’s because they will be throwing the ball all over the field and need to do so with not only accuracy but zip on the ball as well.

Teams That Have a Smart Quarterback - The quarterbacks in this system will need to be able to read defenses quickly, and make adjustments on the fly fast. With a short drop back, it’s important to get rid of the ball quickly to avoid a sack.

Teams That Have a Variety of Pass Catchers - The West Coast Offense is famous for involving tight ends, fullbacks and halfbacks, in addition to at least two wide receivers. To be truly successful, a team will need to have a variety of players with good hands.

Who Should Not Use the West Coast Offense?

​Teams That Are Run Heavy - The West Coast Offense will certainly integrate running plays to balance the attack. However, this offense ultimately likes to use the short passing game as an extension of the running game. So, it’s not the best fit for teams that like to pound the ball on the ground.

Teams That Don’t Have Agile Offensive Linemen - The West Coast Offense doesn’t use many jumbo packages with extra linemen, and the tight end will often run routes on passing plays. Because of this, it’s important teams have an offensive line that is agile and can move side to side.

Teams That Don’t Have Good Route Runners - It’s not just important for a West Coast Offense to have good pass catchers. They must be good route runners, too. With many of the passes short and quick, it’s essential that receivers run crisp routes to get open fast.

Almost all plays run out of a West Coast Offense will have the same personnel.

While there could be slight adjustments to the personnel grouping to add an extra wide receiver by substituting out a running back, for example, most of the tinkering in this offense happens with the formation, not the positions.

Here is the more traditional personnel in a West Coast offense:

The formations are where a coach in the West Coast Offense can have some fun moving players around. He might split the tight end out wide, for example, or even do the same with the halfback.

What a coach will do a lot of the times is put one player in motion before the snap of the ball.

This will force the defense to make adjustments on the fly in hopes of creating even more mismatches.

The standard formation for all West Coast plays are:

Guards (G) - Both start in their normal position, on either side of the center.

Offensive Tackles (T) - Both start in their normal position, on the outside of the guards.

Tight End (TE) - Starts outside the offensive tackle on either side of the field, depending on the particular play call.

X Wide Receiver (X) - Starts lined up wide near the sideline at the line of scrimmage, on the opposite side of the center from the tight end.

Z Wide Receiver (Z) - Starts lined up wide near the sideline off the line of scrimmage, on the same side of the center as the tight end.

Quarterback (QB) - Starts lined up under center to take the snap.

Fullback (FB): - Lines up directly behind the quarterback (or slightly to his right or left) about three to five yards back.

Halfback (HB) - Lines up in the backfield. Most of the time, he will line up to the left or right of the fullback at the same depth.

​The West Coast Offense will utilize a lot of running plays.

Most of them are fairly simple runs straight ahead, with the fullback serving as the lead blocker for the halfback, and the tight end remaining in to block as well.

For the purposes of this article, then, we’ll instead break down two passing plays to show you the different looks a coach can employ out of this offense. 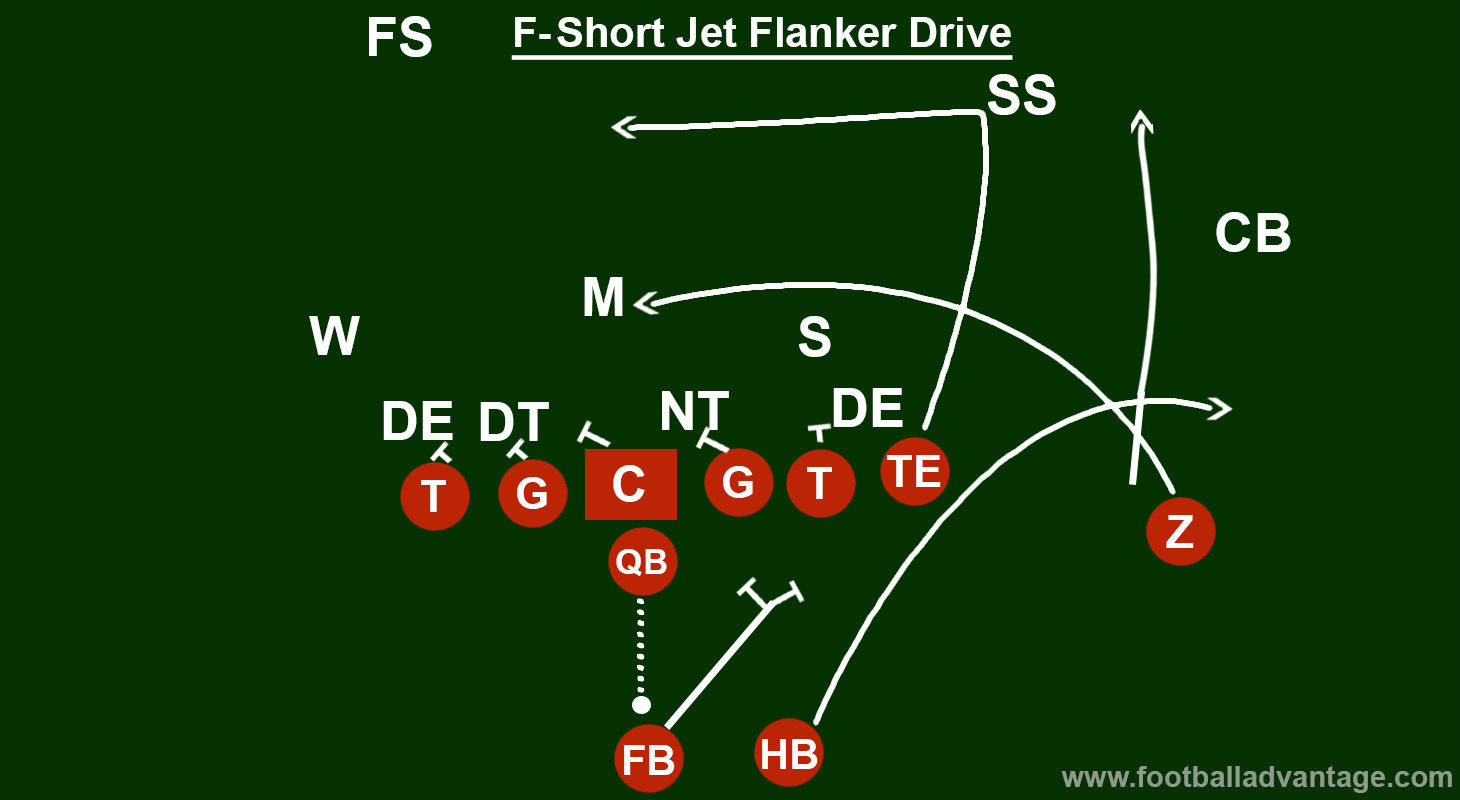 This play will start with the standard personnel and formation and actually not bring any player in motion.

Both wide receivers, the tight end, and the halfback will all run passing routes, while the fullback will stay in to block.

Three of the passing routes will go to the left side of the field, with one going to the right.

Each offensive lineman will line up at their traditional positions along the line of scrimmage.

When the ball is snapped, the linemen will all be responsible for pass blocking toward their left.

The one exception will be the strong-side offensive tackle, who will block straight ahead or to his right as he protects the area of the line left vacant by the tight end running a passing route.

Will line up on the strong side of the field at the line of scrimmage, right next to the offensive tackle.

At the snap, he will release from his position and run an Inn route at a depth of about 10 to 12 yards.

Will line up out wide on the weak side of the field at the line of scrimmage.

At the snap, he will run a Go route deep down the sideline.

While this is designed to give the quarterback the option to throw the ball deep, it is also done to draw a cornerback and the free safety out of the middle of the field.

Will line up split out wide right, on the same side of the field as the tight end, but off the line of scrimmage.

At the snap, he will run a short Drag route over the middle of the field, giving the quarterback the option to throw a quick short pass if the other two deeper routes are covered.

Will line up directly behind the quarterback, about five yards deep.

At the snap, he will approach the line of scrimmage toward the spot where the tight end lined up.

He will look to his right and his left, identifying the first defensive threat that enters the backfield, and pick them up.

Will line up a few yards to the fullback’s right, at the same depth.

At the snap, he will run a short Drag route similar to the Z Wide Receiver, but toward the outside of the field.

He will serve as the quarterback’s safety valve in case no one else is open.

Will start the play lined up under center.

He will take the snap and drop back about five yards and stop, quickly surveying his passing options in the process. 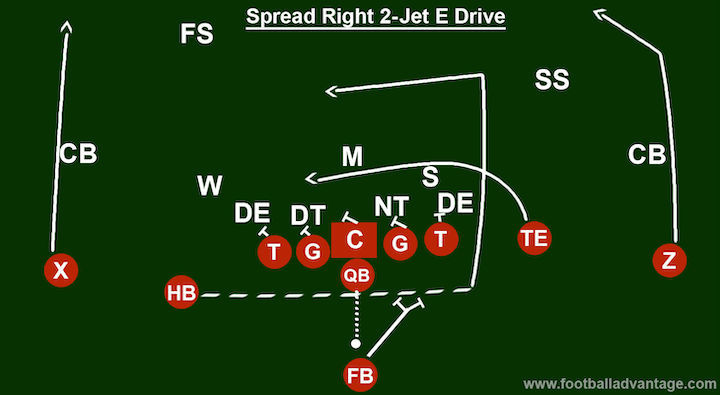 This passing play will show you a slightly different approach that a West Coast Offense can take with a few simple tinkerings.

The biggest change in this play is that the halfback will be lined up out wide, more like he’s a wide receiver.

Before the snap, he will also go in motion from one side of the field to the force the defense to shift its alignment.

Four players will again be running passing routes on this play, with two going toward the left (or weak side of the field) and two going deep.

Will line up in their normal positions.

Just like the play above, they will block toward the left, except for the offensive tackle who will be responsible for the defensive end who will be lined up on his outside.

Will line up on the line of scrimmage, but will split out further than normal.

Instead of lining up right next to the offensive tackle, the tight end will line up about three to five yards out to the right.

At the snap, he will run a Drag route to the left, at a distance of about four to six yards.

Will line up wide near the sideline on the strong side of the field, just off the line of scrimmage.

At the snap, the Z will run a deep post route toward the deep middle of the field.

He will hopefully take the cornerback and strong safety with him, or he will be an option for a deep pass in one-on-one coverage.

Will line up wide to the left, a few yards outside the offensive tackle and a few yards off the line of scrimmage.

Before the snap, he will go in motion to the right side of the line, stopping when he gets between the offensive tackle and tight end.

At the snap, he will run an In route back toward the side of the field where he lined up, at a depth of about 12 yards.

Will line up wide to the left near the sideline at the line of scrimmage.

At the snap, he will run a Fly route.

The idea, again, is to take the cornerback and free safety with him, or serve as a passing option for the quarterback in one-on-one coverage.

Will line up directly behind the quarterback, about five yards deep.

Just like the above play, he will step toward the right side of the line at the snap, looking left and right and picking up the first defensive threat who comes into the backfield.

Will line up under center.

He will take the snap and again drop straight back about five yards before stopping, scanning his passing options along the way.

His progression will again be deep to short – first the Z, then the X, then the Halfback, then the Tight End.

The West Coast Offense is a great offense to run.

It has been proven to be very successful for some of the best NFL teams ever, and it’s also stood the test of time, as it is still used in some form today.

However, some younger and more inexperienced football teams may find that the West Coast Offense is too difficult to run to the fullest extent.

This is mainly because they don’t have a quarterback with a strong enough arm yet to make all the throws necessary.