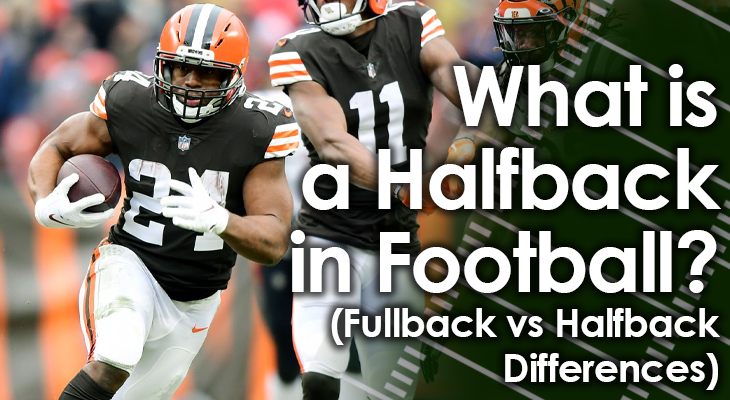 In football, there are different names given to running backs based on their particular role in the offense.

These names are typically given based on the offensive formation and style of attack, as they help coaches and players identify the general roles of the players who line up in the backfield.

One of those players is called a Halfback.

The Halfback is generally responsible for being the primary ball carrier for the offense on all running plays.

While he won't be the only one carrying the football, he will be the player who receives the lion's share of those carries.

Halfbacks also have different responsibilities, of course, but the skill that the position excels in the most is the ability to run the ball.

Let's take a closer look at what a Halfback in football is, as well as the main differences between a Halfback and Fullback.

The first major difference between a Halfback and Fullback is where they line up on the field.

On almost every play, both players will line up in the backfield, either behind or to the side of the quarterback.

However, this depends on if the quarterback is under center or in shotgun.

At times, the Halfback or Fullback may be in motion to line up wide to the formation or even approach the line of scrimmage.

But, these are in very rare circumstances.

Typically speaking, the Fullback will line up closer to the line of scrimmage, with the Halfback behind him.

In an I-Formation, for example, the quarterback will be under center.

This is because the Fullback will typically serve as the lead blocker for the Halfback on running plays out of the backfield.

In order to do this job properly, the Fullback has to be out in front, so he can pave the way for where the Halfback will run. 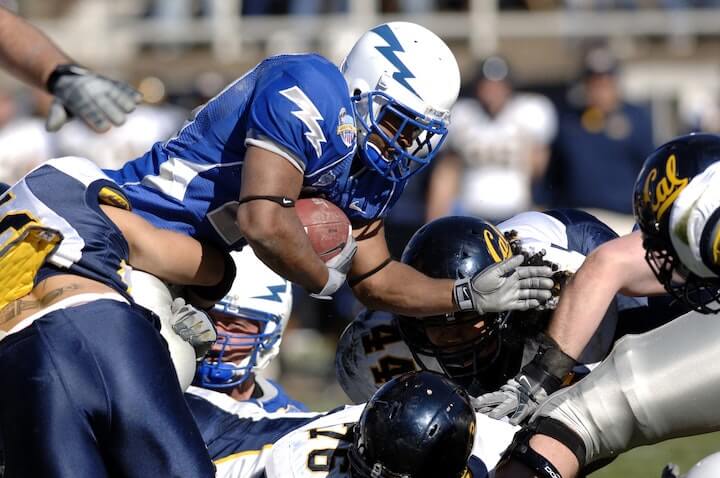 The other main differences between a Halfback and Fullback come in what their main responsibilities are.

While both could be responsible for three assignments on any given play, how they do it -- and how often they're asked to do it -- is the main distinction between them.

As mentioned earlier, the Halfback will be the offense's primary ball carrier on most running plays.

He is the best ball carrier on the team, with great vision, awareness, shiftiness, quickness, speed, and the ability to break tackles.

Halfbacks can take direct handoffs from the quarterback, or they can take a pitch or toss for running plays that aim to get to the outside of the defense.

Fullbacks may also take handoffs occasionally, but not as often as Halfbacks.

When Fullbacks get handoffs, it's mainly done as a "change-of-pace" to confuse the defense. Most of the time, these handoffs happen quickly since the Fullback already lines up so close to the quarterback.

This can catch the defense off guard and result in some good yardage.

Because Fullbacks are generally bigger and stronger than Halfbacks, they may also need to carry the ball in short-yardage or goal-line situations.

Running backs are sometimes called upon to run passing routes and catch.

This is a responsibility that Halfbacks will do much more often than Fullbacks will.

Halfbacks generally have pretty good hands. While they don't have as great a set of hands as, say, wide receivers, most still have the ability to catch when called upon.

Fullbacks might have this skill, too, but it's certainly not a requirement of the position. Plenty of Fullbacks will never catch a pass, or even be asked to run a passing route.

Offenses may even substitute their Fullback for another receiver, tight end, or another Halfback on obvious passing downs.

All running backs will need to block on occasion, but this is actually the main responsibility of Fullbacks.

As mentioned earlier, Fullbacks serve as the lead blocker for Halfbacks on almost all running plays.

They will need to burst through a designated hole in the line and pick up the first defender that crosses their face.

This will help open more running lanes for the Halfback, so he doesn't have to juke this first defender and break the tackle.

On passing plays, the Fullback will also stay in to pick up rushing defenders from the outside -- if he's on the field at all.

(the Fullback will often be substituted off on obvious passing plays)

The Halfback may also need to block at times, but on rare occasions only.

Halfbacks will only block on some passing plays where the offense thinks the defense might be blitzing extra players.

In this case, the Halfback may stay in to provide extra protection for the quarterback.

The Halfback is the primary ball carrier for offenses on most running plays.

While he might have to catch passes and block from time to time, those are certainly not the skills that make him a fit for his position.

By contrast, a Fullback's primary duty is to block -- providing protection for the QB on passing plays and serving as the lead blocker for Halfbacks on running plays.

While both the Halfback and Fullback are running backs in football, there are many differences that separate the positions and the players who are good fits for them.