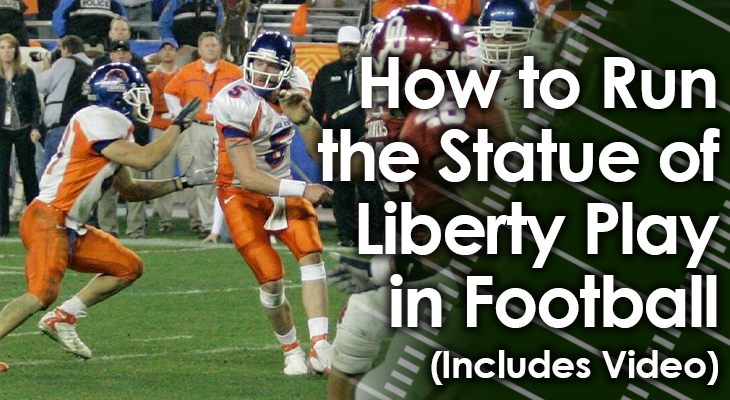 The "Statue of Liberty Play" is one of the classic trick plays in football.

It can't simply be called a misdirection play, as it's extremely risky and doesn't just involve a fake run or a fake pass.

There are many moving parts to this play, and it isn’t run all that often at any level. In fact, there are easily entire seasons in which the Statue of Liberty play is never run at all.

That being said, there are some famous instances of the Statue of Liberty play being run at high levels of football.

The most famous of all is probably when Boise State ran it in the 2007 Fiesta Bowl against the University of Oklahoma (video below).

As that particular play showed, it's a "last-ditch effort" play call to try to win a game. It's not something that you run in the middle of the second quarter or if you're down by multiple scores.

Teams run the Statue of Liberty when they need a "Hail Mary" of sorts to go your way to win a football game with the element of surprise.

Below, we dive into what the Statue of Liberty play is and how you can run it.

What is the Statue of Liberty Play?

The Statue of Liberty play got its name after how the quarterback looks when running the play.

As he hands the ball off to the running back on this trick play, he stands with one arm up in the air and one hand back behind him -- like the real Statue of Liberty does in the United States.

The way this trick play is run is that the quarterback will start by faking a pass.

But unlike a draw play, he won't just drop back and fake as if he's going to throw the ball... he'll actually do doing the entire throwing motion with his throwing hand.

While doing so, he will hold the football in his other hand the entire time, hiding it from defenders.

After the quarterback fakes the throw, he'll then extend his non-throwing arm (in which he's holding the ball) behind his back.

The running back will then swoop in behind and grab the ball from behind the quarterback and run with it.

If done correctly, the entire defense will be running to one side of the field to go after the fake pass, leaving the running back with tons of space on the other side. 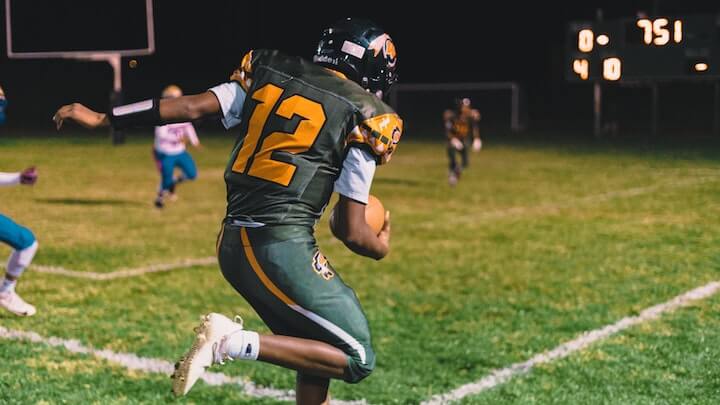 How to Run the Statue of Liberty Play

There are several elements to the Statue of Liberty play, and all must go right in order for the play to be successful.

First, know that the formation in this play will often be heavy toward the side of the field that the quarterback throws from.

So, for instance, if the quarterback is right-handed, the formation will be heavy toward the right side of the field.

This means that most of the receivers will line up on the right side of the field as well.

At the snap, the offensive line will act as if they're pass blocking.

They will snap up and take a few steps back but won't give too much.

Unlike a Draw play, they won't necessarily release off the line of scrimmage to help blocking...

In fact, they might not really help block downfield at all during the Statue of Liberty play.

Instead, their goal is to block their defenders away from where the play is going -- so, in this example, they’ll block to the right, shielding them away from the left.

All receivers will also run their routes to the right side of the field - even receivers lined up on the left side.

The reasoning behind this is simple:

You want to clear out the left side of the field of as many defenders as possible. And to do that, you need to have all the routes run to the right.

In addition, make sure the routes they run are at different depths. You want some runners running deeper than others to create confusion and jam up that side of the field as well.

The running back should pop up at the snap and act as if he's staying in to block.

He'll scan the field, but he's not really looking for blocking opportunities but rather where he can run to the left.

Then, he'll start to creep to his left toward the quarterback.

The quarterback will take the snap and scan the field to the right, acting as if he's looking for an open receiver. Both hands on the ball as he does so.

Then, as he goes to "throw" the ball, he'll bring the ball down with his left hand to his side -- rather than back with his right hand.

(He will need to do this quickly so it looks as if he's making a real throw!)

The QB will then fake a throw with his right hand, which won't have a ball in it.

Then he'll dip the left hand behind his back with the football in it.

The running back will come behind him and take the ball from him. Then, the RB will aim for the daylight to the left, hopefully for a big gain -- most likely a touchdown.

The Statue of Liberty play is one of the oldest trick plays in the book.

However, it's not used often because it's very risky.

There are a lot of moving parts that must go perfect for it go smoothly.

There are also a lot of opportunities for disaster, including a big tackle for loss or (worse) a turnover.

So, run the Statue of Liberty play at your own risk.

Know that it's really only a play that should be run if you're desperate for a last-minute score in a tight game -- just as Boise State did in the 2007 Fiesta Bowl against Oklahoma.