5 Crazy Trick Plays in Football (And How to Run Them)  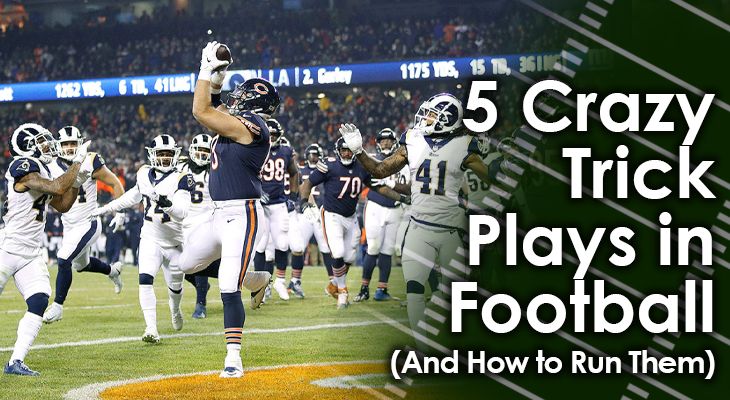 Coaches at just about every level will say how important it is to keep defenses guessing by having a complete, balanced offensive attack.

This can either mean being equally strong at both running and passing (higher levels of the game) -- or having multiple running attacks (more for youth levels).

There may come a time in a game, however, where the offense needs a big boost.

Maybe you need to give your team a jolt of energy, score some points quickly, or turn the field around to get out of a bad situation.

These are all times when a coach might call for a crazy trick play.

Now, these trick plays are more than just simple misdirection plays like a draw play or the play-action pass...

Instead, they're full-blown deceptions designed to completely confuse every defender.

Trick plays aren't designed to gain a few yards or even convert a first down... these are meant to completely fool the defense to gain huge yardage and/or score a touchdown.

Here are 5 crazy trick plays for when your offense needs a jolt.

The Hook and Ladder is one of the oldest trick plays in the book.

It starts out looking like a typical short passing play, only to end as a complete misdirection toss to another player mid-stream.

While the rewards on this play can be great, the risks are relatively high, too, as it can be a little complicated to execute.

On this play, a wide receiver flanked out to the right or left side of the field will run a typical Hook route.

This involves him sprinting about 5-7 yards straight downfield before stopping and hooking back in toward the middle of the field.

The quarterback's job is to throw him an accurate pass.

At the snap, a running back lined up to the same side of the field will take a relatively slow path toward the outside shoulder of the receiver running the Hook.

As the pass is approaching the receiver, the running back needs to pick up his speed.

The goal is for the running back to be about 2-3 yards away from the receiver on a diagonal toward the sideline as the receiver makes the catch.

Once the receiver successfully catches the pass, he will turn to his outside and pitch the ball to the sprinting running back.

The receiver should hit the running back in stride with the pitch, as if he were a quarterback operating downfield.

The beauty of this play is that the entire defense will be reacting to the initial reception -- going toward the inside of the field.

At the last second, they'll have to adjust and try to catch up with the running back who's been running at full speed the whole time -- and who should now be going down the sideline with the ball in his hand.

Who says that only quarterbacks can throw passes?

Halfbacks can throw them, too -- and the Halfback Pass is a great trick play that's also a fairly easy one to teach.

Halfbacks are eligible to throw a pass as long as they do NOT move forward after they receive a handoff.

If they take one step forward after getting a pitch or handoff, they are ineligible to throw a pass -- even if they're still behind the line of scrimmage.

It's imperative that you stress that to your halfbacks when teaching them this play.

The way this play works is quite simple.

The quarterback will take the snap under center, then turn and either directly hand the ball off or pitch the ball to the halfback.

The halfback will then act as if he's going to run the ball to the outside.

After getting the ball, the halfback must take an arching pattern a little behind the spot he got it, while heading to the outside of the field.

Then at the last minute, as defenders are approaching him, he'll set his feet as if he were a quarterback and throw a pass downfield.

The two receivers in this play will initially act at first as if they're going to run block. Then they will release and run deep Slant routes to what now should be a wide open area of the field.

The halfback's primary target is the receiver lined up on his side of the field.

The Shovel Pass used to be considered more of a trick play than it is today, if only because more coaches are integrating it into their every game playbook.

However, it should still count as a trick play in youth football, because of how challenging it can be to execute.

The success of a Shovel Pass depends a lot on the timing between a quarterback and the halfback. When the timing is on, this is a great option play that often results in huge yardage gained.

For this play, the quarterback will line up in shotgun formation.

The halfback lines up to the far right and a tailback to the left of the QB.

At the snap, the quarterback will sprint out to the left and act as if he's either running a keeper sweep or that he's going to pitch the ball to the tailback.

To sell this fake, the tailback needs to run hard to the left and act as if he's going to get the pitch.

At the same time, the halfback will be sprinting across the field to the left as well, but hiding behind the offensive linemen.

The OL will all be blocking down to the right, except for the right guard who will be pulling to the left.

In this play, the offense will leave the defensive end on the weak side unblocked.

This play will look to capitalize on this defensive end's proclivity to try to get to the quarterback and make a big tackle for loss.

As the quarterback is going to his left, he'll keep an eye on the halfback position and that of the defensive end.

Once the halfback reaches just outside of where the left tackle lined up, the quarterback will pitch him the ball forward.

This is called a Shovel Pass, and it's technically a forward pass.

The goal here is to have the defensive end overcommit to the backfield, which should open up a huge hole between him and the Mike linebacker.

This trick play is a lot of fun to run, and it's also pretty simple to teach.

It's a huge trick play as it actually involves not only a wide receiver throwing a pass, but a quarterback catching a pass, too.

You'll set up this play like a typical reverse pitch with the offense lining up in an I-Formation.

There will be an X receiver on the line of scrimmage to the left and a Z receiver off the line to the right, with a tight end also to the right side of the field.

The quarterback will line up under center, with both a fullback and a tailback directly behind him.

At the snap, both the fullback and the tailback will sprint out to the right.

The goal here is to make the defense think that the play is going to be a run to the right.

The quarterback will open up to his right and fake a handoff to the fullback.

At the same time, the Z receiver will retreat back behind the tailback and then run straight across the field to the left.

The quarterback will then pitch him the ball.

The X receiver will run a Deep Post route that's meant to clear members of the secondary away from the left side of the field.

How this differs from a traditional reverse run happens next.

After making the pitch, the quarterback will loop around to his left and run a Wheel route down the left sideline. He must get there quickly so he's out in front of the Z receiver.

The Z receiver will take his time with the ball in the backfield as he runs to his left, faking the whole time that he's going to run with the ball upfield to the left.

At the last minute, he'll stop running, set his feet and throw a deep pass to the quarterback.

If the offense runs the play correctly, the quarterback should be wide open.

The next closest defender to him will be the free safety, who will have to run half of the width the field just to get close to him. 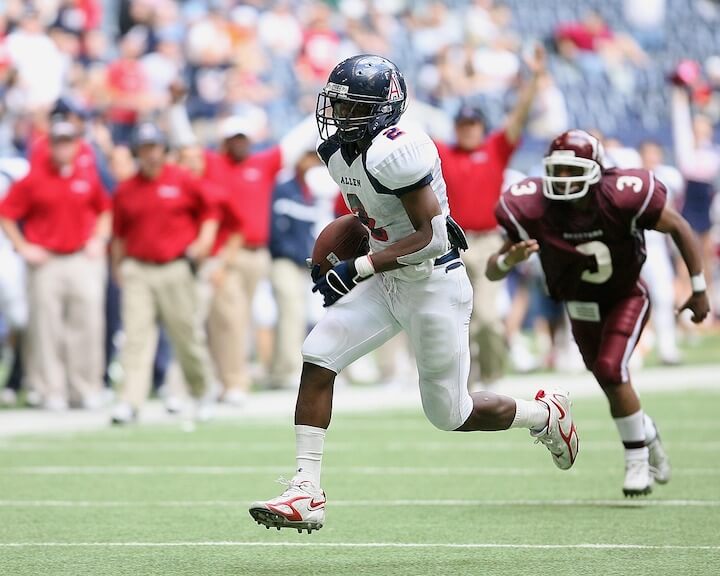 Another semi-trick play is the throwback pass that's accompanied by a quarterback rollout.

In this scenario, the trick isn't convincing the defense that the play is a run when it's actually a pass (or vice versa)...

The trick here is making the defense believe the play is going to one side of the field, when it's actually going to the other.

In this play, you'll go with a big formation.

You'll have two tight ends line up at the line of scrimmage, one running back in the backfield, and two wing backs slightly diagonal from the tight ends.

At the snap, the both wing backs will run deep Post patterns to the right side of the field.

The running back will also run to the right and act as a blocker sealing off that side of the line.

The quarterback will also roll out to his right, but only until the point just outside of where the right wing back lined up. He'll then quickly stop plant his feet, reverse his body to the left side and then throw a pass to the left.

The player who will be his target is the left tight end.

At the snap, the left tight end will start by dropping back into pass-blocking formation, like all the other offensive linemen.

After about a 2-count, he'll curl around his back and run a swing pattern to the left.

The idea here is that the defense will all be moving toward the right side of the field, and they'll lose sight of the tight end running a route to the left.

A successful Throwback Rollout should see a wide open field for this tight end.

Trick plays are great for offenses to alter the game.

These are big plays meant to gain big yardage and/or score a touchdown for the offense -- not just gain a few yards.

These should only be used every once in a while, because while the potential rewards are huge, there are bigger risks to these plays, too.