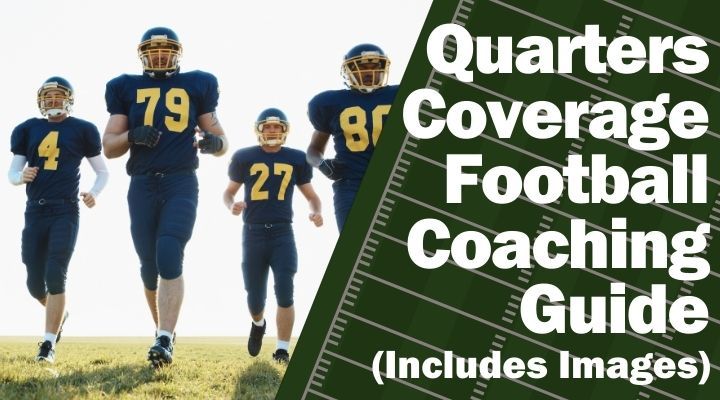 Quarters Coverage is becoming one of the more popular schemes for defenses today at all levels of football.

This is because offenses today run a lot of different formations that include multiple wide receivers.

The spread offense is becoming more and more popular, and offenses can have a good balance of passing plays and running plays out of that formation.

To counter that, defensive coaches need a coverage scheme that works equally well against the run and the pass.

Quarters Coverage is that scheme.

One of the best parts about Quarters Coverage is that it can be run out of the base defensive alignments, meaning it works equally as well for a team that runs a 4-3 or a 3-4 defensive front.

Also, coaches can install variations of the Quarters Coverage that’d sub out a linebacker for an additional defensive back.

This would be a Nickel or Dime variation on the Quarters Coverage.

Let's take a closer look at the coverage scheme.

Who Should Use the Quarters Coverage?

Quarters Coverage, sometimes referred to as Cover 4, can be used by any team.

There’s no limitation to whether it should be used by 4-3 defenses or 3-4 defenses.

As mentioned before, it's also great to use against both the pass and the run, which makes it a very versatile defensive coverage scheme.

It's one of the main reasons why the Quarters Coverage is starting to be employed by defensive coaches on a more regular basis.

Defenses that prefer to run either zone or man-to-man coverage will also benefit from running Quarters Coverage as well.

The scheme isn't a better fit with one pass coverage attack than another.

Strengths of the Quarters Coverage

1. Good Against Both the Pass and the Run

This makes the Quarters Coverage something that any defense can run on any play.

Coaches don't have to worry about swapping coverage schemes in certain down-and-distances in anticipation of a pass or a run.

Quarters Coverage simplifies the responsibilities for most defensive players on the field (more on this in a bit).

Most players have a pretty easy time understanding what their responsibility is on every play, as they’re assigned a simple zone on the field in which to cover (or man to cover if he enters that zone).

One concern of certain coverages is that it makes it hard for defenses to blitz.

But that's not the case with Cover 4.

There are still plenty of opportunities for coaches to bring an extra linebacker, safety, or even cornerback on a blitz to cause more problems for offenses.

Weaknesses of the Quarters Coverage

1. Safeties Have a Lot to Do

Both the free safety and strong safety will need to read-and-react more so in Quarters Coverage than in other schemes.

While they, too, will have a "quarter" of the field to cover, they’re required to cover much more ground against the run.

2. Can Be Susceptible to Quick-Hitting Plays

Offenses can take advantage of some holes in the Quarters Coverage by running a lot of quick-hitting passing plays.

Out of four wide receiver alignments, this could include quick slants, bubble screens, and quick outs.

This would take advantage of outside linebackers and safeties lined up off the line of scrimmage.

3. Can Be Susceptible to Crossing Routes

Coverage assignments will shift for cornerbacks, safeties, and linebackers as receivers run in and out of their zone.

This can be challenging for defenders to keep up with.

So, savvy offensive coaches will try to call patterns where receivers cross each other and into these other zones to try to trip up the defenders.

How a Prevent Defense Is Run The defensive line in Quarters Coverage will align themselves in their normal base defense positions.

In a 3-4 defensive front, there’ll be three defensive linemen (two ends and a tackle) and four linebackers.

The defensive ends will align themselves on the outside shoulder of the last offensive lineman on his side of the field.

This will either be a tight end or an offensive tackle, depending on the formation the offense is in.

The defensive tackles will align themselves anywhere from the outside shoulder of the offensive guards to heads up on the center.

The primary job of all the defensive linemen is to simply cause disruption.

Defensive tackles are tasked with clogging up the interior of the offensive line, which will force running backs outside on running plays and will open up space for pass rushers on passing plays.

Defensive ends must try to cause similar disruption on the outer part of the line of scrimmage.

At the same time, they need to keep outside contained by not letting a runner outside of them.

This means either a running back taking a carry to the outside or a quarterback scrambling to avoid pressure.

The job of a defensive end in these situations is to either make a tackle or force the ball carrier back inside where there's a lot of extra help. The linebackers in Quarters Coverage will each have the responsibility of covering a specific zone on the field.

The Mike (middle linebacker) and Will (weak-side linebacker) will each take their initial step backward at the snap as they’re reading run or pass.

The Sam (strong-side linebacker) will make his first step to the left. This is done so that it gives all players the depth they'll need in case it's a passing play.

The Will and the Sam will peal out toward the hash marks and zone in on any receiver who either enters that zone or any receiver who’s running a flat route to their side of the field.

The Mike, meanwhile, will be responsible for gaining some depth over the middle of the field so that he can cover any receiver running a crossing route.

He most often will end up targeting a running back who runs a route out of the backfield.

On running plays, the linebackers will approach the line of scrimmage and pursue the ball carrier.

The Will and the Sam will be responsible for keeping outside contained at the second level of defense.

The Mike will simply pursue the ball carrier from his position in the middle of the field. Quarters Coverage is the most complicated for the secondary, especially the safeties.

Even still, the responsibilities aren't so difficult that youth players will have trouble learning the scheme.

The cornerbacks will align themselves a few yards off the line of scrimmage, shading the outside wide receivers toward the inside.

This is done to try to force these receivers (who are often the top ones on the team) toward the outside with their routes, where there isn't as much room to run.

The safeties will both line up on the outside of the hash marks, shading the inside shoulder of the two secondary wide receivers who are lined up slightly off the line of scrimmage.

These four defenders will split the field into four -- or quarters -- which is how the defense got its name.

From sideline to sideline, each player will be responsible for one-quarter of the field.

What responsibilities they have will depend on what specific defensive play is called.

Each defender is asked to only cover their quarter zone on the field. Any receiver that enters that zone will be the responsibility of that player.

The safeties will each be responsible for the "number two" receiver on their side of the field -- or the one lined up toward the inside and slightly off the line of scrimmage.

Once the safety reads pass play at the snap, he must immediately identify the number two wide receiver and see where he's going.

If that receiver runs a route beyond five yards of the line of scrimmage, it's the safety's responsible to pick him up in man-to-man coverage.

If the receiver breaks off a shorter route, then the safety will let the linebacker cover them, and instead, he'll focus on the outside "number one receiver."

He'll be providing extra support to the cornerback in this case.

On running plays (and on quick screen passes), the safeties must approach the line of scrimmage very quickly.

In Quarters Coverage, the defense will rely on the safeties immensely for tackling ball carriers in runs and screen passes, especially those that go to the outside of the field.

The offense will often be spreading out the defense with their formation, which makes it more difficult for the defense to gang tackle.

It also puts more space in between the ball carrier and the defenders and all but takes out the defensive linemen from contributing.

That's why it's so important for safeties to get downhill quickly to support the tackling game in these situations.

Quarters Coverage is one of the best defensive schemes you can teach your football team.

It's equally as good against the pass as it is against the run, which makes it extremely versatile, especially in today's game.

The basics of the coverage come from having adequate coverage against four vertical passing routes from four wide receiver sets, with one defensive back responsible for each quarter of the field, from sideline to sideline.

Everything that happens beyond that all stems from this basic coverage.

Quarters Coverage can be run out of both a 4-3 and 3-4 base defensive alignment, which also simplifies the responsibilities for a lot of players on the field.

It’ll present some extra challenges for safeties to identify and meet their responsibilities, but it's not too difficult for younger players to learn.