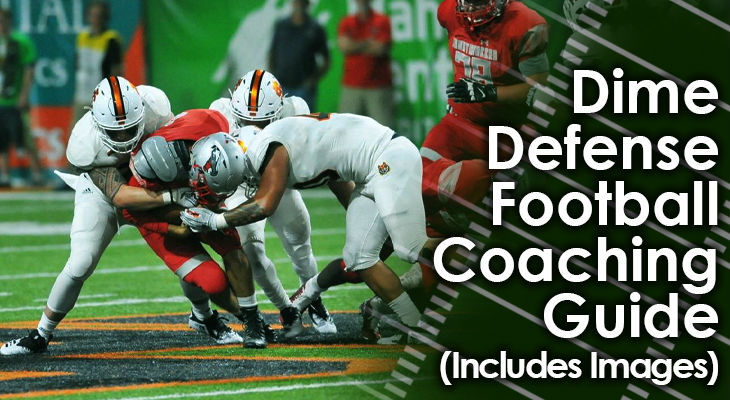 “What should you do when your defense is facing an obvious passing situation where the offense needs to gain a significant amount of yards to gain a first down?”

“What should you do when the offense you are facing constantly runs a spread formation with four wide receivers on the field at the same time?”

The answer to both those questions is that you can run the Dime defense.

The Dime defense was traditionally used in obvious passing situations, as it helps defend against the pass because it involves having six defensive backs on the field and only one linebacker.

However, as more and more offenses are utilizing multiple wide receiver sets and spread formations (especially at the collegiate and professional levels), defenses have responded by running the Dime defense more often.

That fact makes the Dime defense not as popular or necessary in youth football.

But the alignment can also be used against the run by making a few adjustments to the base formation, and could also cause fits for offenses in the running game.

Who Should Use the Dime Defense? 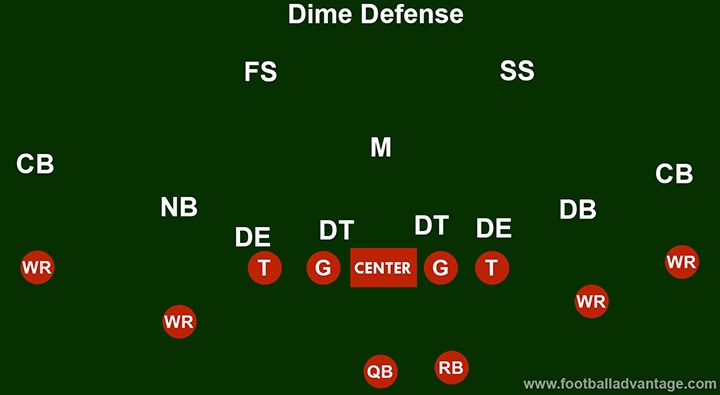 Just about any defense can use the Dime defense in some form...

It’s a pretty basic formation in terms of alignments and responsibilities.

That makes it an easy alignment to deploy in almost any down-and-distance situation.

As mentioned before, the fact that there are six members of the secondary on the field in a Dime defense naturally makes it a formation that coaches use to defend against the pass.

It adds a lot of speed on the field.

This added speed and agility could result in a really good run defense too if your team’s safeties (and even cornerbacks) are good tacklers.

Allows for a Faster Defense - Six defensive backs makes the Dime defense the one with the most speed on the field at any one time. These players have the ability to speed all over the field covering wide receivers, or forcing ball carriers into the middle of the field where help awaits.

It’s Great Against the Pass - Every wide receiver has a member of the secondary covering him, which makes it more difficult to find obvious mismatches in passing routes against slower linebackers.

Allows for Flexibility - A Dime defense can be run with either three or four defensive linemen and one or two linebackers. That allows a defensive coach to be able to customize the pass-heavy alignment to better fit the personnel on the team.

Can Be Used in Multiple Formats - Both a zone and man-to-man coverage can be deployed out of the Dime defensive formation with ease. There are plenty of members of the secondary on the field to defend each receiver which means a defense doesn’t necessarily have to run a zone defense to cover the entire field.

Could be Susceptible to Crossing Routes - While the Dime defense was created to stop the pass, the lack of linebackers does leave a void in the middle of the field. As a result, offenses will often try to spread the field with their formation and then run crossing routes across the middle to take advantage of this open space.

Could Cause Defensive Confusion - The abundance of receiving options could end up setting up inadvertent pick plays, where defenders who are following their assignments all over the field end up bumping into one of their teammates and accidentally letting a receiver run free.

Susceptible to the Run - A defense that runs the Dime in early down situations could be susceptible to big gains on running plays, especially when the offense spreads the field with their alignment.

Might Not Be Good for Youth Football - Youth football teams often run the ball much more than they pass it. Therefore, a Dime defense might not be the best alignment for youth football teams because it can be hard to consistently keep the running game in check.

How to Run the Dime Defense 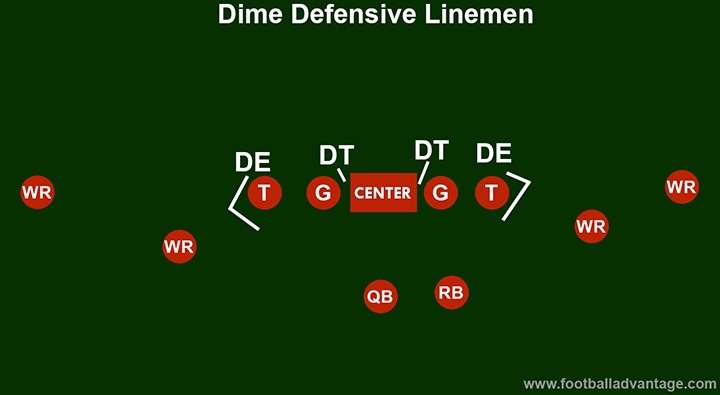 Most of the time a Dime defense will use four down defensive linemen - so that’s what we’ll discuss here.

However, there are times when a defensive coach might decide to run the Dime out of a base 3-4 system, which would mean there would be three defensive linemen and two linebackers.

In the 4-3 base version of the Dime defense, the defensive tackles will line up over the offensive guards either heads up or over their inside shoulders.

The defensive tackles’ primary responsibility is to attack the A gap, although he could be tasked with B gap responsibilities if he lines up on the outside shoulder of the offensive guard.

They will line up on the outside the offensive tackles’ shoulder and be responsible for causing havoc in the backfield.

However, the defensive ends will sometimes also be tasked with dropping back into coverage for extra support over the middle of the field.

This is done a lot of times to counteract what we discussed before – the fact that offenses try to spread the field and run crossing routes against the Dime.

For these reasons, a lot of teams will employ traditional outside linebackers as their defensive ends in a Dime formation. They will even start the play standing up instead of in a traditional three-point stance that most defensive linemen use.

Outside linebackers are usually great at rushing the passer because they are quick and strong, and they also are used to having coverage responsibilities against the pass. 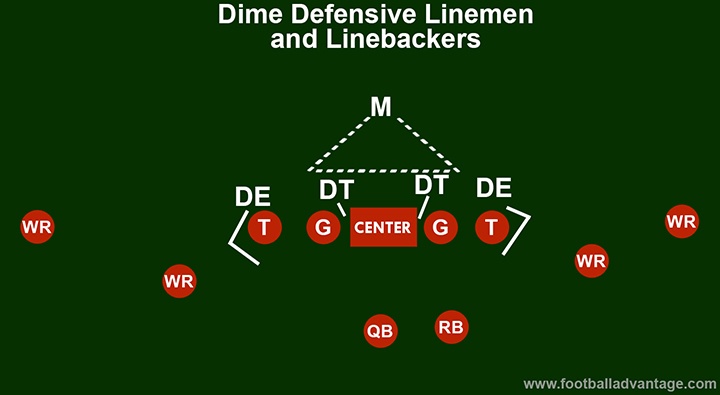 In most Dime formations, there will be only one linebacker – the Mike or middle linebacker.

As mentioned, a second linebacker can become part of the Dime formation instead of a fourth defensive lineman, but most defenses will run the Dime out of the 4-3 base.

The linebacker’s responsibilities in this formation are pretty simple...

On run plays, he is to plug the interior of the line of scrimmage where the play develops.

Because there are four interior gaps – the two A gaps and the two B gaps – and only three players to cover them, it is essential that the Mike reads the play first before he attacks the line of scrimmage.

Those are the same responsibilities the Mike would have if the entire defense is running a zone coverage out of the Dime. 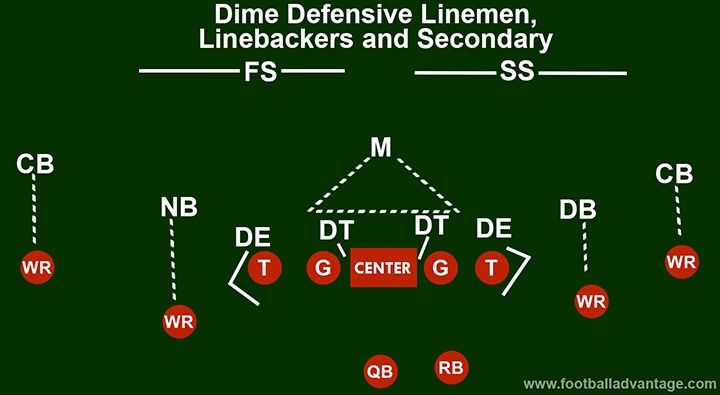 The Dime defense utilizes two cornerbacks, a free safety, a strong safety, a nickelback, and a dimeback – six members of the secondary in total.

The great part about the Dime defense when it comes to the secondary is that the four cornerbacks can play man-to-man defense, with both safeties serving as extra protection over the top.

The cornerbacks will be the same traditional cornerbacks used in other formations. They’ll line up opposite the offense’s two best wide receivers.

When the defense runs a hybrid coverage out of the Dime, the four cornerbacks will remain with their man-to-man responsibility wherever he may roam on the field.

The free safety and strong safety lined up deep will split the field in half and be responsible for providing the cornerbacks with extra help over the top.

But the defense can also run a pure zone coverage out of the Dime as well.

In such plays, the two cornerbacks, Mike and either the nickelback or dimeback, will split the middle depth of the field in quarters from sideline to sideline.

Then, either the nickelback or dimeback will drop back deep and split the deep area of the field in thirds with the two safeties.

As you can see from the design of the different coverages in the secondary and linebacker, the Dime defense is created to keep every play in front of the defenders and limit big plays by the offense.

This goes for both passing plays and running plays, because of how the defense is aligned.

In man-to-man coverages, every possible receiver has a defender matched up against him, plus there is extra help over the top with the two safeties.

Not only does this provides an extra level of protection that other defensive formations don’t, but it also allows cornerbacks or safeties the ability to blitz without leaving a receiver uncovered.

In zone coverages, there isn’t much space that isn’t accounted for, at least not in the deeper depths of the field.

That means that the offense may be able to find some space on shorter passing routes, but it’ll be hard to consistently produce longer gains.

Still, because the Dime defense is so tailored to defend the pass, it’s a defensive formation that’s hard to consistently deploy unless the offense runs a spread formation on every play.

With more offenses doing just that at the collegiate and professional levels, more defenses are responding with the Dime defense on the field at all times.

But that situation doesn’t often apply to youth football teams, who often run the football more than they pass it.

That makes the Dime defense a formation that is best reserved for specific long down-and-distance situations for the offense at the youth football level.

Can the Browns come to rescue of Cleveland sports fans? New idea for defensive end - The Connecting Newspaper June 7, 2020

[…] The Dime Package usually entails six defensive backs and one linebacker. The Browns are sorting via Sione Takitaki, […]

[…] The Dime Package usually includes six defensive backs and one linebacker. The Browns are sorting by Sione Takitaki, […]