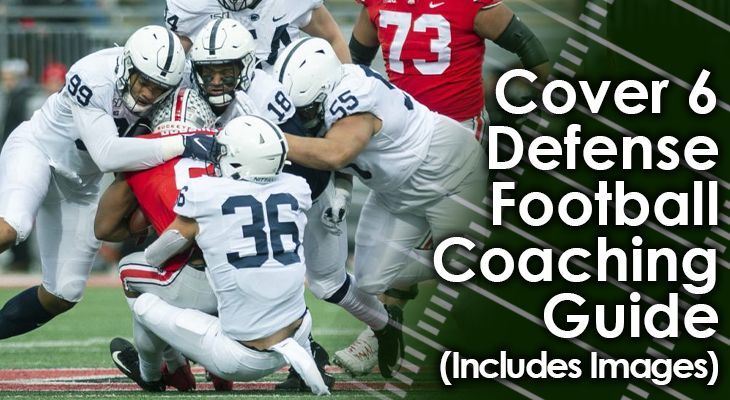 There are a lot of different zone defensive schemes that football coaches can call for different situations.

Many of these zone coverages, as we’ve talked about in other articles, are labeled with numbers that tell the story of the roles and responsibilities for pass coverage for linebackers, cornerbacks and safeties.

Cover 2, for instance, refers to the two deep safeties that will be helping on deep routes.

Cover 4 refers to how the four members of the secondary will each split a quarter of the field to cover.

Cover 6, by contrast, is a combination of those two defensive schemes.

It gets its name from the fact that it’s a combination of Cover 2 and Cover 4...

And like any defensive scheme, there are positives and negatives to running Cover 6.

Let’s take a closer look at the defensive scheme.

Who Should Use the Cover 6?

Cover 6 is a great defensive scheme to call for many football teams.

It’s a nice little wrinkle that can be made to the typical zone coverage scheme to confuse the offense.

Since so many offenses are used to matching up against the Cover 2 and Cover 4, they can start to plan counter plays to it that might be successful.

The Cover 6 makes the offense think the defense is running one coverage across the board, when in fact, they are running two different types of coverages.

That being said, it’s a defensive scheme that can only be installed once a team has mastered both the Cover 2 and Cover 4 schemes, since it’s a combination of both.

Because of this, it’s really only a scheme that a more advanced team should use.

A youth football team that has a lot of players who are new to the game probably won’t be able to fully grasp the defensive scheme and use it to its full effects. 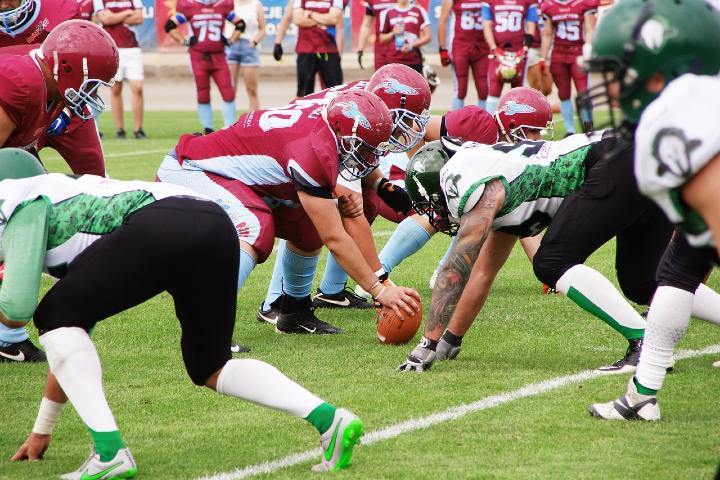 The Best Combo of Two Zone Coverages - Cover 6 takes the best principles of the Cover 2 and Cover 4 and blends them together. This includes providing extra deep coverage on one side of the field, while also providing strong run support from the strong safety on the other side.

Very Strong Against the Run - Some of the weaknesses of the Cover 2 and Cover 4 come against the running game. Cover 6 counters that by allowing both safeties to truly support run defense since they won’t need to get too deep for over-the-top pass coverage.

Has Some of the Same Holes as Other Zone Coverages - Just like it takes the best of both Cover 2 and Cover 4, Cover 6 also has some of the same weaknesses as those two defensive schemes. That includes relying on a four-man rush to get good pressure on the quarterback (in a 4-3 base defense).

There are Short Passing Opportunities - Cover 6 can be very vulnerable to passes in the flat. That’s because the cornerbacks are dropping back, and the defense is relying on linebackers to run a far distance to cover the flat. This is especially true for the “field side” of the defense.

It’s Susceptible to Combo Routes - Especially to the “boundary side” of the defense, Cover 6 is susceptible to combo routes such as corners/streaks and curls/flats. 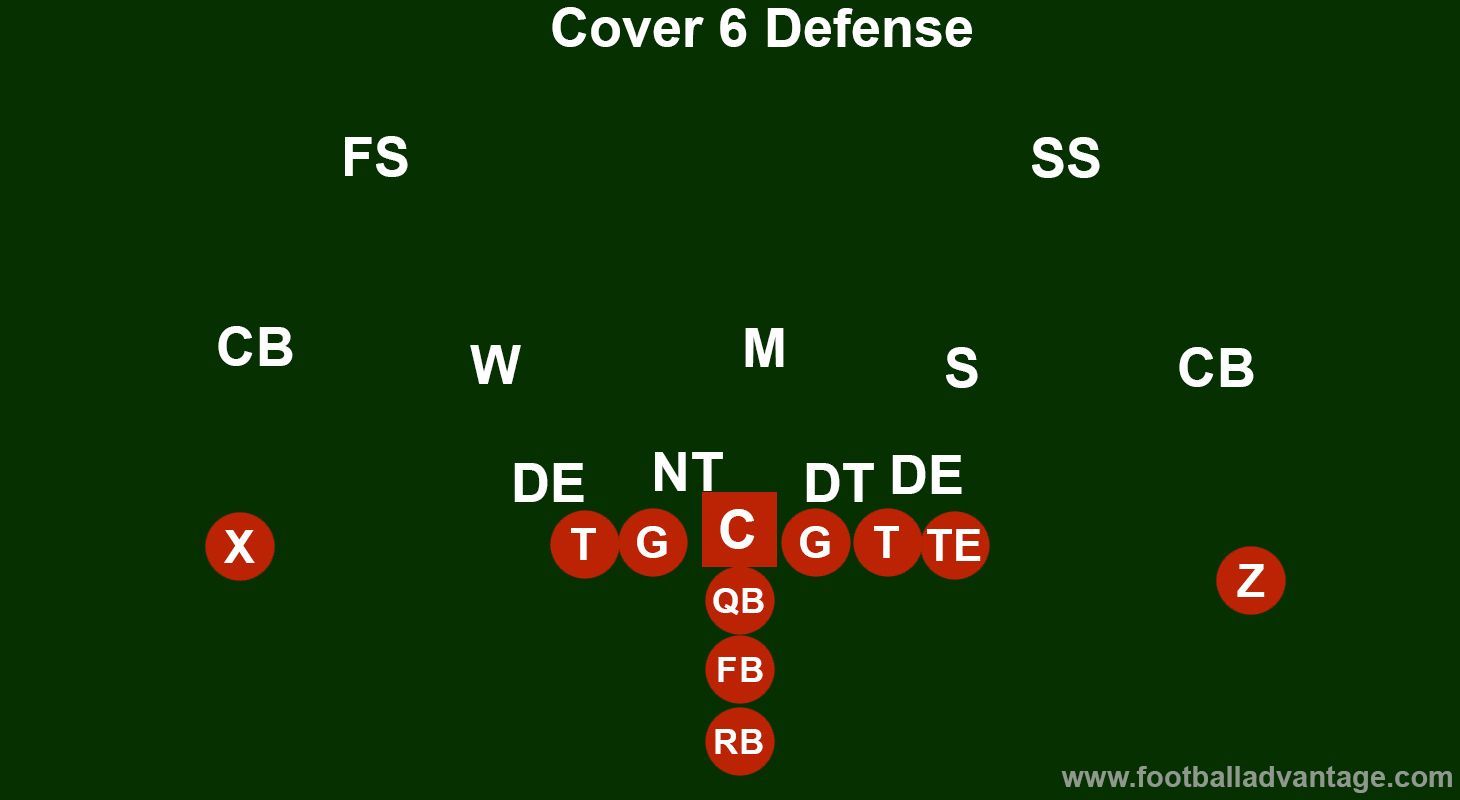 For our example below, our defense will be running a 4-3 base defense.

There will be four defensive linemen, three linebackers, two cornerbacks and two safeties on the field.

The offense, meanwhile, will be in the I-Formation.

How a Cover 6 Defense is Run

The defensive end on the weak side of the field will line up on the outside shoulder of the offensive tackle, in an effort to spread out the line.

The defensive tackle on the strong side will align himself heads up on the tight end.

The nose tackle will be on the weak side of the field. He’ll align himself on the outside shoulder of the center.

On passing plays, the job of the defensive linemen is very simple – get as much pressure as possible on the quarterback.

They shouldn’t worry about clogging up offensive linemen and other blockers.

They should only try to get into the backfield as quickly as possible.

As mentioned before, the linemen are the only players normally tasked with putting pressure on the quarterback (unless a blitz is called).

That’s why it’s extremely important that they get as much “push” into the backfield as they can on passing plays.

The defensive tackles, meanwhile, need to clog up as much space as they can along the line of scrimmage.

The tackles need to try to occupy two blockers each, so that one of these blockers can’t get to the second level to body up a linebacker.

The defensive tackles don’t need to worry too much about making a tackle.

If they do, that’s great.

If not, that’s OK, too – as long as they’re occupying as many blockers as possible to free up linebackers to make a play. 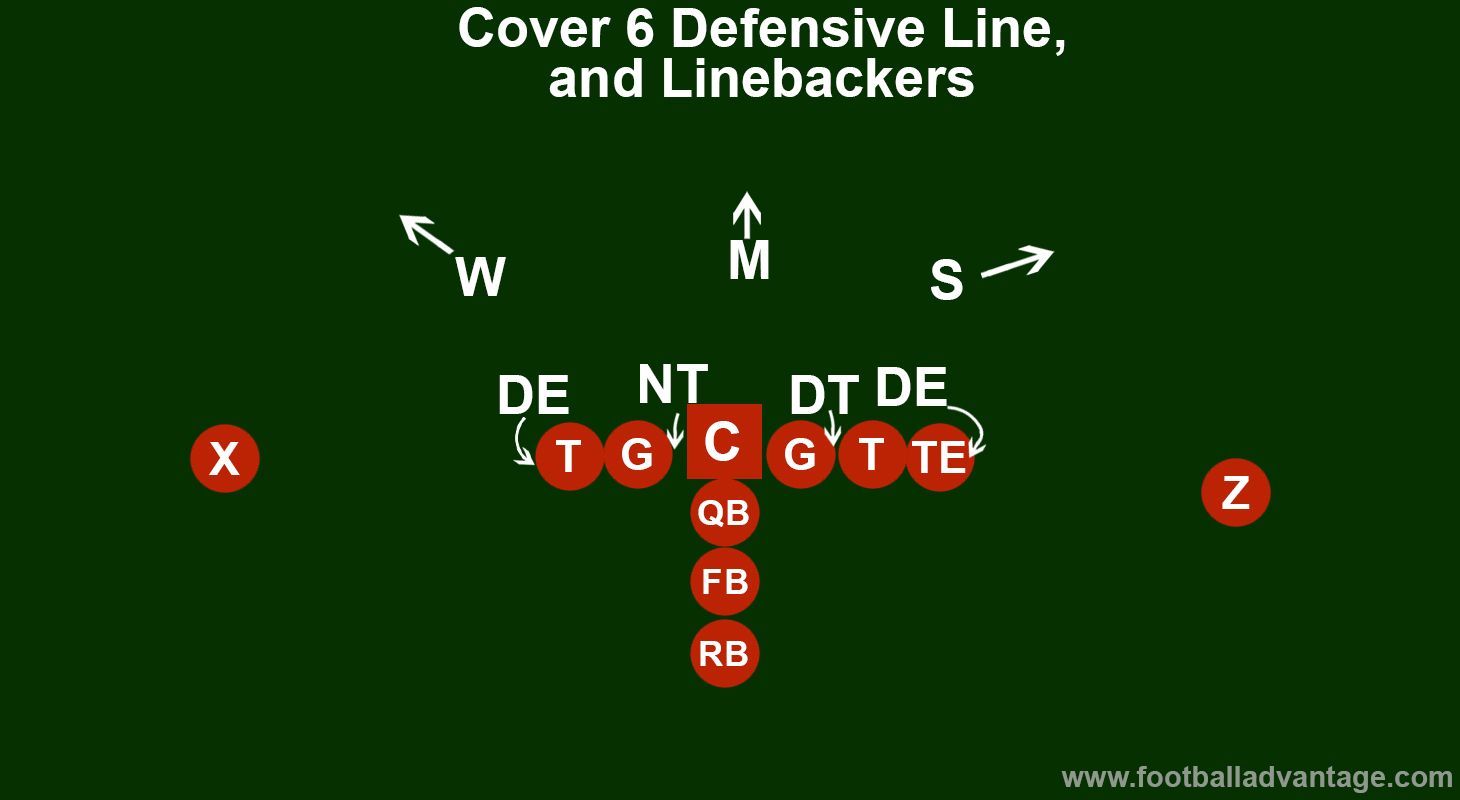 All three linebackers will line up about five yards off the line of scrimmage.

The Mike (middle) will be between the nose tackle and defensive tackle.

The Sam (strong-side) will shade just to the outside of the tight end’s outside shoulder.

The Will (weak-side) will shade just to the outside shoulder of the defensive end on the other side of the field.

On running plays, the linebackers’ responsibilities are quite simple…

They must approach the ball carrier as quickly as possible, while protecting against the cut-back. That means both outside linebackers must keep contain, so that the ball carrier can’t get to their outside shoulder if he cuts back.

On passing plays, their roles will be slightly different from each other.

Since our hypothetical defense is running a 4-3 base, the Mike will always be responsible for covering the hook route.

He’ll need to read what the running back is doing at the snap, and then “hook” straight back a few yards to cover that area of the field.

The strong side (or field side) of the defense will be running Cover 4.

This means that the Sam will be responsible for covering the curl/flat routes toward the sideline.

He’ll need to read what the tight end does at the snap, and then quickly get to the outside in case the offense calls a swing pass or other route in his area.

The weak side (or boundary side) of the defense will be running Cover 2.

This means the Will is responsible for covering the curl route.

At the snap, he needs to get depth on a diagonal route from where he lines up.

The most likely receivers who will enter his zone in this coverage are either of the running backs, the tight end or the X wide receiver. 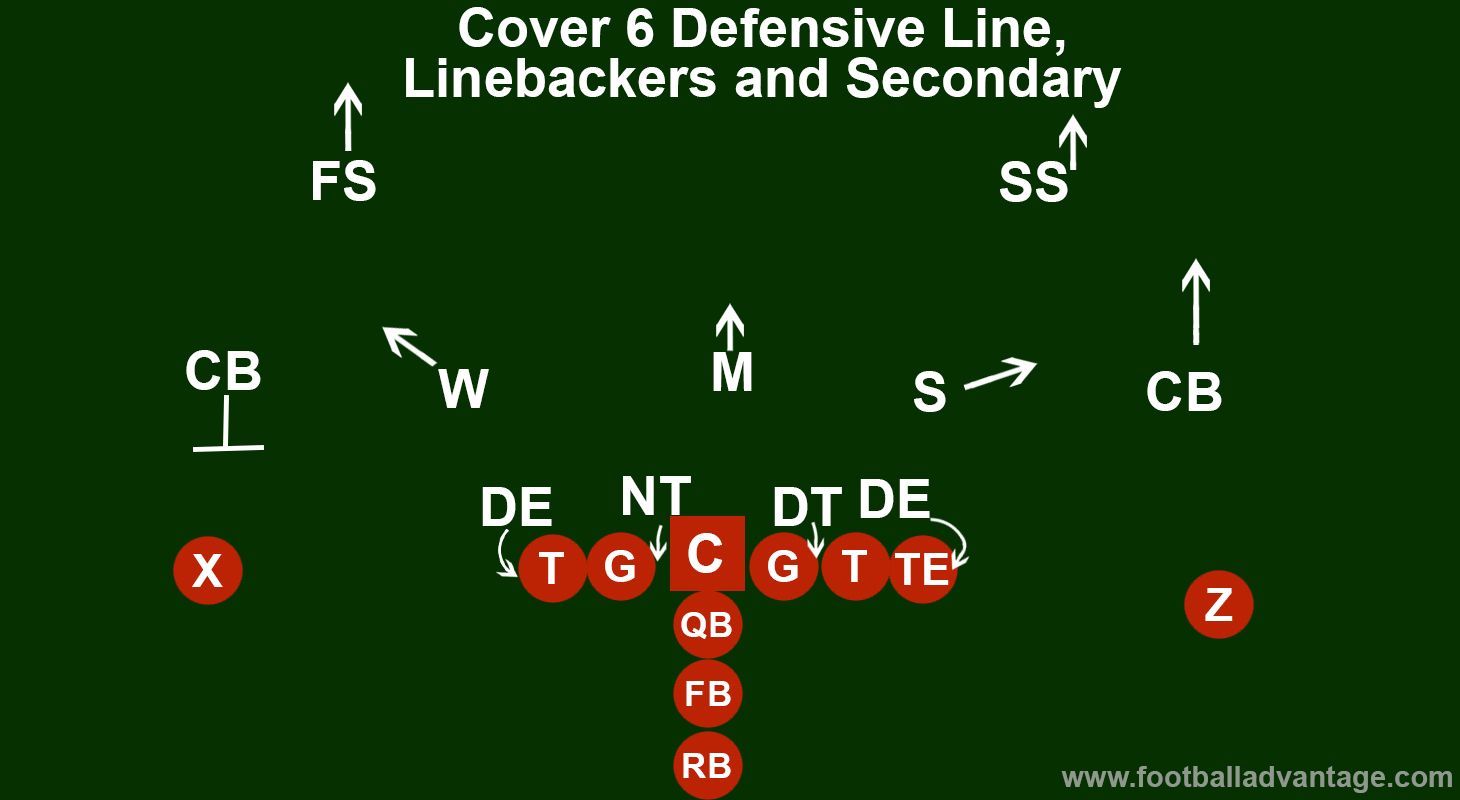 In Cover 6, the four members of the secondary will run two different coverages.

The free safety will line up on the weak side of the field, where he’ll play Cover 2 with the cornerback and Will.

The cornerback will line up on an outside shade on the X receiver, trying to force him inside.

The cornerback on the weak side will “stay home,” and be responsible for covering the flat route that could be run by the X wide receiver or either of the backs.

The free safety will be responsible for covering the deep half of the field for deep routes run most often by the X or running back.

On the strong side, the cornerback and strong safety will be running Cover 4.

The cornerback will have an inside shade on the Z wide receiver, trying to force him to the outside.

At the snap, both of these players need to read what the tight end does, and then will be responsible for covering the deep quarter of the field.

The Sam and Mike will be responsible for covering the shorter routes from the middle half of the field to their sideline.

Cover 6 is a nice little wrinkle to the typical zone coverages that most defenses run.

A lot of defensive coaches like to use this coverage today because it shows offenses a different look that they aren’t used to preparing for.

At the same time, the Cover 6 does have some downfalls.

It still is susceptible to passes in the flat, as both the Cover 2 and Cover 4 are.

In addition, it’s a more complicated defensive scheme to teach, since it’s a combination of two different coverages.

Therefore, if you want to use Cover 6 for your team, make sure they thoroughly understand how to run both Cover 2 and Cover 4 first.