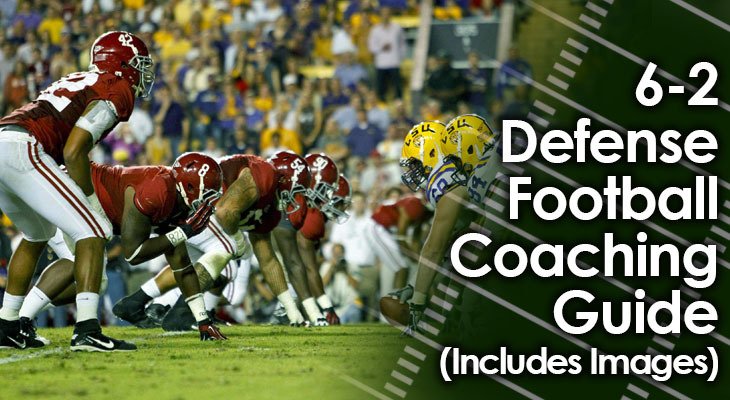 The 6-2 defense is a very popular alignment for youth football teams.

Because most offenses in youth football are run-heavy, defensive coaches counter by putting extra players along the line of scrimmage.

They sacrifice a linebacker and member of the secondary to have an extra man at the typical point of attack.

This defensive alignment utilizes what are known as two wide tackles in addition to the four traditional defensive linemen.

That's why it's sometimes referred to as the "Wide Tackle Defense" as well.

By placing these extra defenders along the line of scrimmage, you'll be committing more players to stuffing the gaps up front, making it harder for the offense to open up holes for running backs to run through.

The trade-off is that there will be fewer defenders at the second and third levels of the defense. Pass coverage will most likely need to be man-to-man and not zone as well.

Even still, the strengths of the 6-2 Defense often outweigh the weaknesses for youth football teams.

It just may not be a defensive alignment that teams at higher levels of the game can use on a consistent basis.

Let's take a closer look at why.

Who Should Use the 6-2 Defense? The 6-2 Defense is an alignment that most youth football teams can utilize on an every-down basis. That's because many youth football offenses will run the ball much more than they'll pass.

And when they do pass, they'll often have shorter passes, simply due to the lack of arm strength of quarterbacks at this young age.

At more advanced levels of the game, the 6-2 Defense can still be used, but it's a better fit situationally.

For example, the 6-2 alignment could be good in goal line situations or on third-and-short.  However, it might not be good to use against a good passing team on early downs.

It’s Difficult to Run Against It

Because of the extra linemen up front, your two linebackers will often be unblocked. They'll be able to roam free most of the time, filling any gaps that do open up. Most of the time, the fullback will be responsible for blocking one of these linebackers, and that's a severe disadvantage for the offense.

It's easy to teach

Another great part about the 6-2 Defense for youth football teams is that it's easy to teach. It's mostly a straight-ahead, one-gap defense. The defensive linemen cover the gaps in front of them, with the linebackers covering the other two open ones. This allows the cornerbacks to cover any wide receivers man-to-man on passes, or have outside contain on running plays.

It's Not Good Against The Spread

One way an offense can counter the 6-2 Defense is by spreading out the field. When this happens, it forces defensive ends to cover wide receivers, which creates obvious mismatches in the passing game. It also opens up holes for inside running.

There Aren't Many Safety Valves

By putting so many defenders up front, you're relying on your defensive linemen and two linebackers to make "sure" tackles. If a running back is able to break through this first line, they often will have a lot of room to run. Similarly, if a runner gets outside, there aren't many defenders that can pursue either.

It's Susceptible to Misdirection Plays

The linebackers in a 6-2 defense need to not over-pursue or bite on a misdirection play. Again, if they do, there aren't as many other defenders that can help bail them out. A 6-2 defense will use six defensive linemen and two linebackers.

In addition to the two defensive ends and two defensive tackles that a 4-3 defense uses, there will be two other players at the line of scrimmage known as Wide Tackles.

Let's go from the inside out to understand the alignment and responsibilities for each player.

The two defensive tackles will clog the middle of the line.

They'll each have responsibilities of clogging up the A gaps.

The wide tackles will align themselves anywhere from heads up on the offensive tackle or over their outside shoulder.

They will most often be responsible for clogging up the C gaps, leaving the B gaps for the linebackers (more on that in a bit.

The defensive ends will also spread out wide.

They'll line up a step or two to the outside of the last lineman at the line of scrimmage, which is usually a tight end.

By spreading out wider than the tight end's outside shoulder, they'll make it very difficult for the tight ends to get outside to block them.

The defensive ends will have responsibility over the D gaps, as well as have outside contain on running plays.

As you can see, the 6-2 Defense simplifies the roles and responsibilities for the defensive linemen.

They're all asked to cover just one gap, and most of the time, that gap is the one that's directly opposite of where they lined up pre-snap.

Coaches can install some variations on this one-gap technique with stunts, too.

A lot of times, the stunts will happen with both defensive tackles or the wide tackle and the defensive end.

Similarly, on the outside, the wide tackle will sometimes stunt to the D gap, while the defensive end curls around behind him to attack the C gap.

In a 6-2 Defense, there will only be two linebackers on the field. Most of the time, the traditional Will (weak-side) linebacker is the one who will be on the sideline.

That leaves the traditional Mike (middle) and Sam (strong-side) linebacker on the field.

These players won't have their typical responsibilities, though.

This makes it even simpler for the defenders to understand their responsibilities.

Both linebackers will align themselves about three to five yards off the line of scrimmage and between the defensive tackle and wide tackle on his side of the field.

On running plays, they'll have the responsibility of plugging up the B gaps.

On passing plays, each linebacker will have man-to-man coverage responsibility for the tight end on his side of the field.

If the offense uses one tight end and two wing backs, then the linebacker who doesn't have a tight end on his side of the field will be responsible for the wing back on his side.

As mentioned before, it's very important that linebackers read the play correctly before reacting.

While their initial thought would be to attack straight forward, that can leave them susceptible to play-action passes or even misdirection running plays.

It's so important that the linebackers in a 6-2 defense don't let players behind them, as there is usually no extra help. The secondary in a 6-2 defense consists of three players:

a. Two cornerbacks
b. One free safety

You can use your strong safety, too, but the free safety is usually more suited to this defensive alignment.

Your best cornerback will be tasked with lining up opposite the one wide receiver on the field.

He'll want to shade him inside, forcing him to the outside when he runs his route.

If there isn't another wide receiver on the field, the other cornerback will line up on the outside hash mark on the other side.

His primary man-to-man coverage responsibility will be the running back.

On running plays, both cornerbacks will need to approach the line of scrimmage and make sure to keep outside contain.

It's extremely important that they don't allow any ball carrier to get outside of them, unless they are forcing them out of bounds.

The free safety will split the two linebackers and align himself about 10-15 yards off the line of scrimmage.

His primary man-to-man coverage responsibility is the fullback.

At the snap, he needs to read the play quickly as either a pass or a run.

On a pass, he'll need to eye up the fullback to see what he does.

On a run, he needs to track the ball carrier and approach him as quickly as possible.

Again, though, he's the literal last line of defense.

He can't let any runner get behind him or the runner will have daylight to the end zone.

The 6-2 defense is a great option for youth football teams for a number of reasons.

It's extremely easy to coach, and it does a great job of protecting against the run, which is what most youth offenses run a majority of the time.

There are game situations that could make sense for teams at more advanced levels to use the 6-2 defense.

The defense does have some downsides, though, including being weak against a spread offense and not providing extra protection over the top.