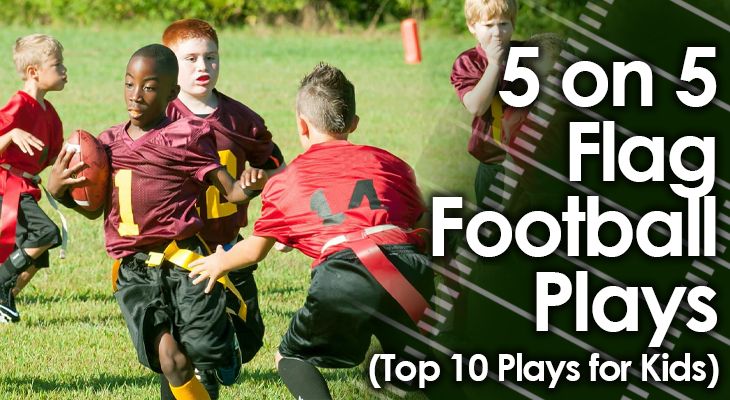 There are many ways in which kids can learn to play the game of football.

Players don't have to dive right in to play full-padded, 11-on-11 football.

There are many alternatives that can teach kids the fundamentals of the game and at the same time reduce the chance for injury.

Flag Football is one of the more popular options, especially for youth leagues.

Instead of traditional pads, players wear a belt with flags hanging off it. Here, players are considered tackled when a defender rips off a flag or rips the belt off them entirely.

The 5-on-5 version of the game is a lot of fun because it opens up the field a lot more.

The game focuses much more on the passing and the skill part of the games, and less on the blocking and tackling. It's a great way to have kids work on throwing, running routes, catching, and basic defending.

If you're coaching a team, here are 10 of the top 5-on-5 flag football plays you can use. 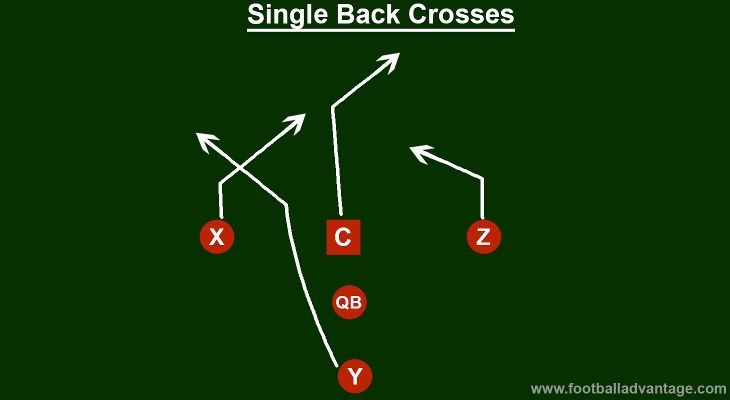 In this play, you'll have a single running back (Y) in the backfield, with two receivers (X and Z) split out wide, one on each side of the formation.

At the snap, the snapper (C) will run a Deep Post route to the right side of the field.

Both outside receivers will each run Quick Slants toward the middle of the field.

While the running back will run a Slant toward the left sideline.

The goal is for the Y to actually cross paths with the X on their routes. This will hopefully cause some confusion among defenders and get someone open. 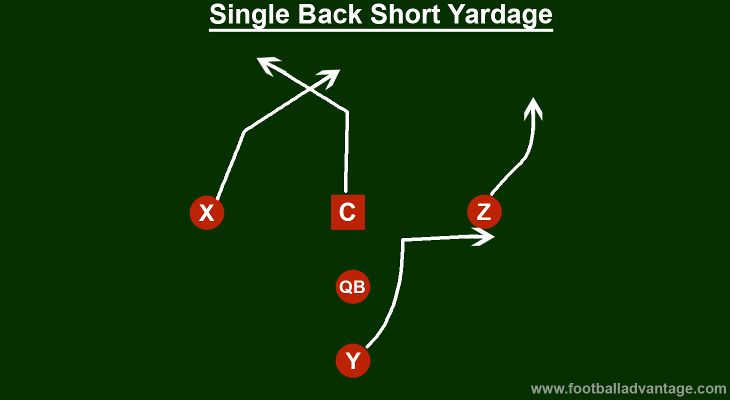 If you're looking for a short-yardage play in flag football, this is a good one to run.

It'll have the same formation as the play above.

At the snap, the C will run a Post to the left side of the field, while the X will run a Slant to the middle. The goal is for their routes to cross each other, confusing the defenders. 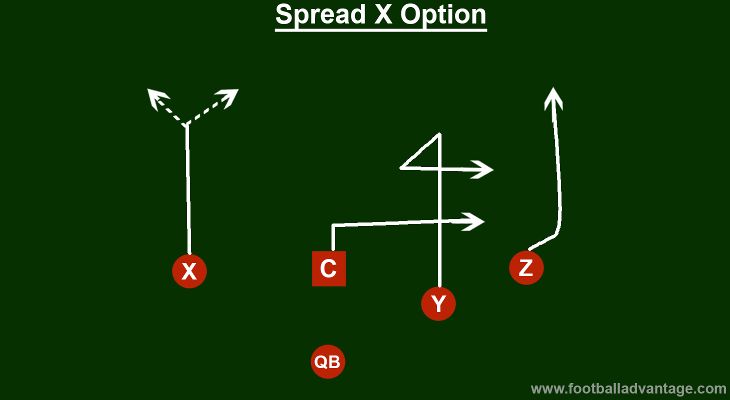 This play is run out of the spread formation, with no player lined up behind the quarterback. Instead, the Y will line up to the right, just off the line of scrimmage and between the C and Z.

At the snap, the X will run an option route toward the left. He can go either to the outside or the inside -- with the goal of driving defenders on that side away from the right.

The Z will run a Fade route deep down the right sideline.

The Y will run a relatively quick Curl route, but he can also have it end as an Out route to the right sideline to get open more.

The C will release late and will run a quick Out route to the right. 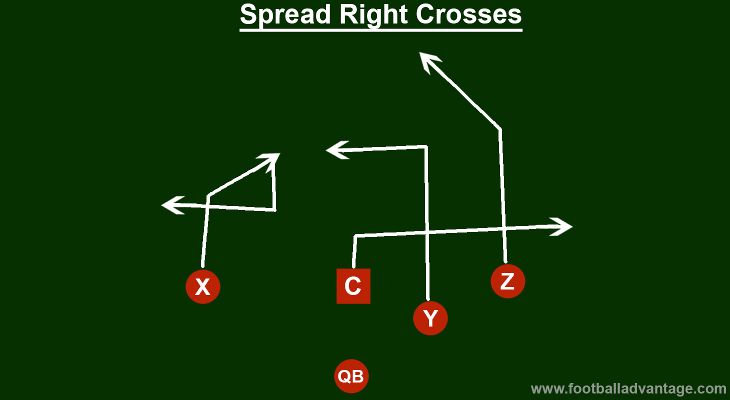 This spread formation play will again make use of crossing routes to the right, to cause confusion among defenders.

The Y will run a Deep In route, while the C will run a Quick Out to the right -- these are the two routes that will cross.

Meanwhile, the Z will run a Deep Post that's meant to attack the defense at three levels on the right side of the field.

On the left, the X will run a Quick Slant toward the middle that he can also end with running deep or toward the left sideline.

The bunch formation is a great one to use in 5 on 5 flag football as it can really confuse defensive players.

The tight formation can also result in defenders running into each other, allowing players to get open as a result.

Here, all four (4) routes on this play will cross at some point:

The X should finish his route on a slight Slant toward the right to get some depth. 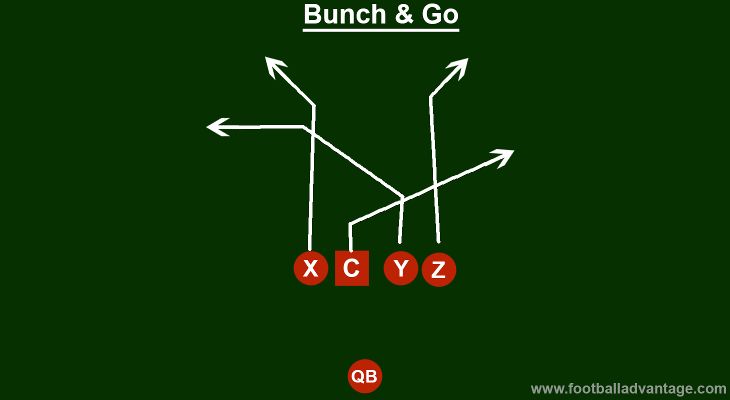 This play has the same concept, as do most plays run out of this formation.

Only this time, the two deep routes will NOT cross each other -- and be run by the outside receivers.

The X and the Z will each run deep routes -- starting as straight Go routes, but can end as slight Fades toward the outside.

The Y will run a Quick Slant that will end as an Out route to the left.

The C will run a straight Quick Slant to the right -- he should make sure his route stays very shallow the whole way. 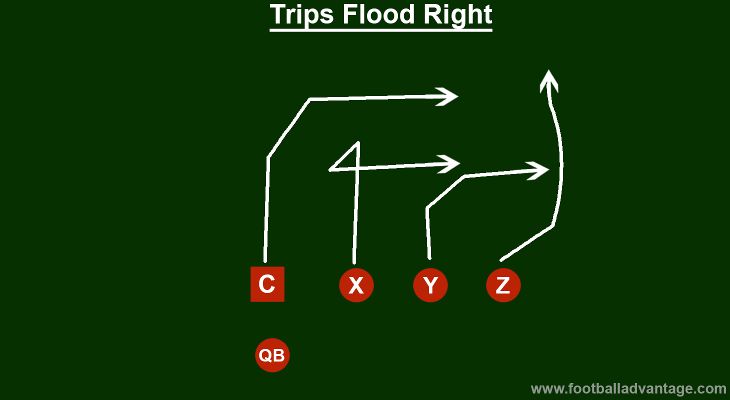 The trips formation will see three (3) receivers line up to the right side of the snapper.

Three of the receivers will run out route -- taking their defenders to the sideline -- while the fourth (Z) will run a deep route.

At the snap, the Y will run a Quick Post route that will end straight across to the sideline.

The X will run what starts as a Curl, but will also end straight across to the sideline.

The C will run a Deep Post that will also end straight across to the sideline.

The Z will run a Deep Fade route down the right sideline.

The hope here is that the other defenders run into the man covering the Z, who will then be open deep. 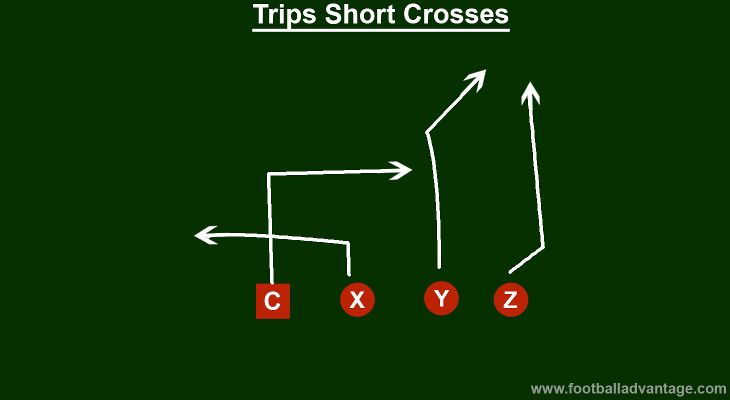 This trips formation will have two (2) pairs of routes crossing each other -- one pair short and the other pair deep. 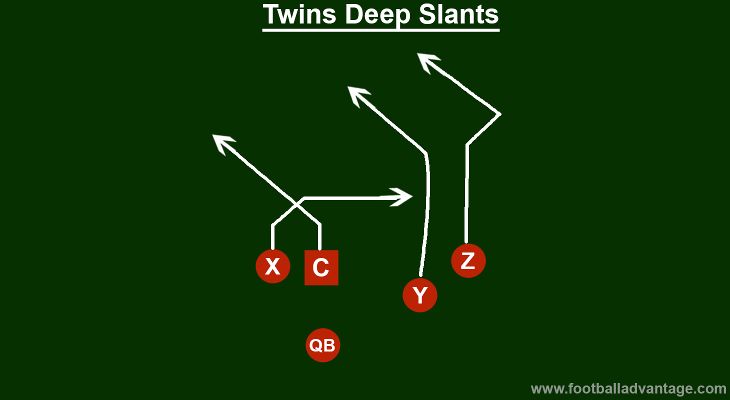 The twins formation is another great setup for 5-on-5 flag football plays.

In it, the X and the C will line up close to each other, and then so too will the Y and the Z, with the Y in the backfield slightly.

In this play, the Y and the Z will each run Deep Slants toward the middle of the field.

The Z's route will be slightly deeper than the Y. He will also be using a double move -- first doing a Deep Post, but then breaking off to a Deep Slant.

The C will run a Quick Slant to the left, while the X runs a shallow Out route to the right.

The design of the play is for both shorter routes to cross each other. 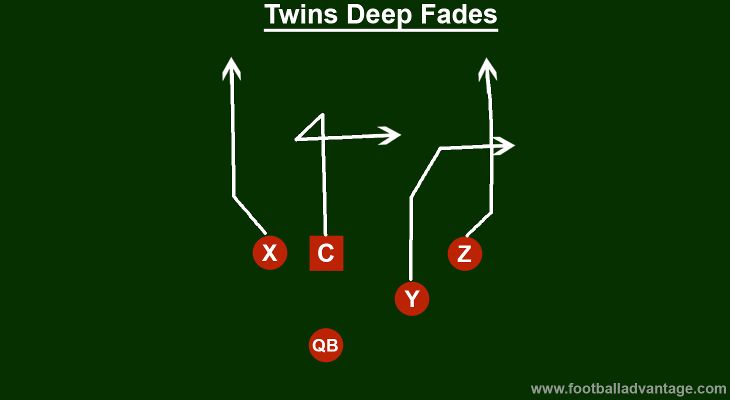 At the snap, the X and the Z will each run Deep Fade routes on their side of the field. The X will have more room on the left, since he'll line up further away from the sideline.

The Y will run a Post to the right, which he'll then break off to an Out route toward the right sideline.

The C will run a mid-range Curl route that he'll also break off into an Out route to the right.

These are 10 of the top 5 on 5 flag football plays to teach your kids.

The game is a lot of fun to play and also teaches young players the fundamentals of running routes, passing and catching the football, and covering speedy receivers.

Flag football provides a lot of opportunity for coaches to have fun calling exciting plays, and for kids to execute and have fun scoring.