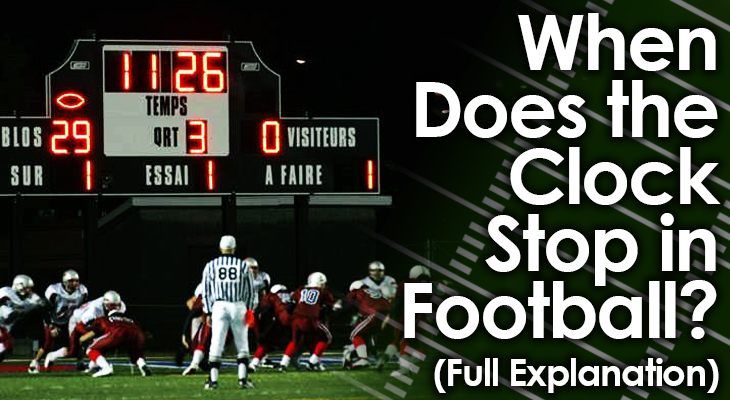 In football, a running clock ticks down as the plays are going on.

There are pre-determined times when the clock will stop.

Understanding when these stoppages occur is important, as offenses can use it to give them more time to huddle up and get set for a new play.

When players and offensive coaches understand the when the clock stops in football, they can use these rules to their advantage.

There are only so many instances in which the clock will stop, so learning it is simple.

Below is every situation when the clock stops in a game of football.

When Does the Clock Stop in Football?

At most levels of football, the clock will stop in the same ways.

There are one or two different situations when the clock will stop in lower levels of the game, which we'll point out below.

Here are the times when the clock will stop, as well as how it applies to the different levels of the game. 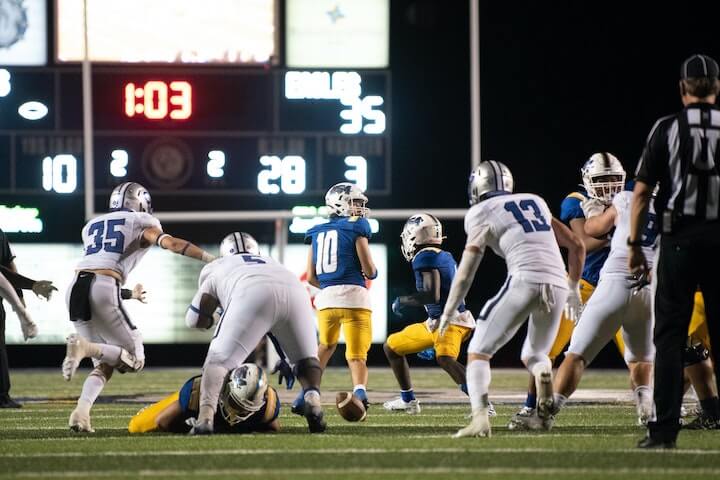 After every incomplete pass, the clock will stop.

This can be in the form of a ball spiked by the quarterback to the ground, thrown away out of bounds, knocked down by a defender, or simply doesn't make a connection with a receiver.

The clock will stop the second the referees rule the ball incomplete.

Player Out of Bounds

When a ball carrier runs out of bounds, the clock will stop.

In the NFL, the clock will re-start once the official spots the ball on the field for the next play, except for the last two minutes of the first half and the last five minutes of the fourth quarter.

In lower levels of the game, however, the clock does not re-start after an official spots the ball. It won't start again until the next snap of the ball, signifying the start of the next play.

Officials can also use their discretion to say the defense stopped the ball carrier's forward motion in-bounds before he went out of bounds.

In this instance, it's considered dead in the field of play, and the clock will keep running.

Any time the ball changes possession from one team to the next, the clock will stop.

This includes after a turnover, a punt, kickoff, or turnover on downs. In all of these instances, the clock will stop once the play ends.

The clock won't start running again until the offense snaps the ball for the next play.

On every penalty, the clock will stop in order to give the official time to announce what the penalty is.

During this period, the official will figure out what the result of the penalty is, and march off the yardage as a result.

Whether the clock starts again once the official places the ball at the new spot depends on what the penalty is, which team commits it, and at what point in the game the penalty occurred.

The clock can either restart right after the referee spots the ball or until the next snap.

The clock will stop any time a team scores point.

Whether it's a touchdown, field goal, or safety -- the clock will stop as soon as officials call a score.

Extra points are actually tried during untimed plays, where the clock won't run at all.

After all scoring plays, the clock won't begin again until the place kicker makes contact with the ball for the ensuing kickoff. 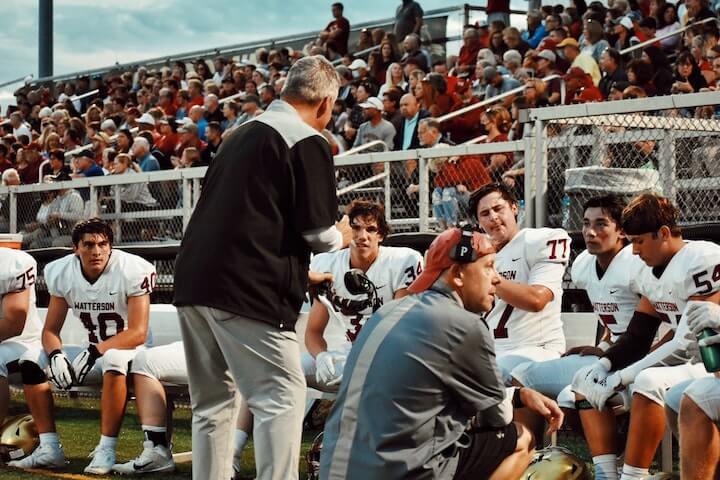 At every level of football, each team has three time outs per half.

This is a chance for the team to stop the clock and regroup, talk to their players, and prepare for what's ahead.

When a team calls a time out, the clock will stop completely.

After the time out is over, the players will head back onto the field, and the play clock will resume on the official's whistle.

However, the game clock won't start again following a time out until the team snaps the ball.

When a player goes down injured, the official will call the play dead, and the clock will stop.

This will allow the medical team to check out the injured player, tend to him, and help him off the field if need be.

The clock will typically not restart again until the next snap of the ball.

In the NFL and many other levels of football, there is what's called the Two-Minute Warning.

This happens in both the second quarter and the fourth quarter.

The official will blow the whistle at the conclusion of the last play that ends once the clock winds down past (or exactly at) 2:00.

When this occurs, there will be a time out and the clock will stop.

This happens even if the last play is one that would result in the clock stopping anyway, such as an incomplete pass.

In all instances, the 2-Minute Warning will result in a time out.

Among the many rules of football, there are rules that cover when the play clock should stop and when it should resume.

There are some different variations on these rules from the NFL and other levels of the game, but all of the above apply to just about every level of the game.