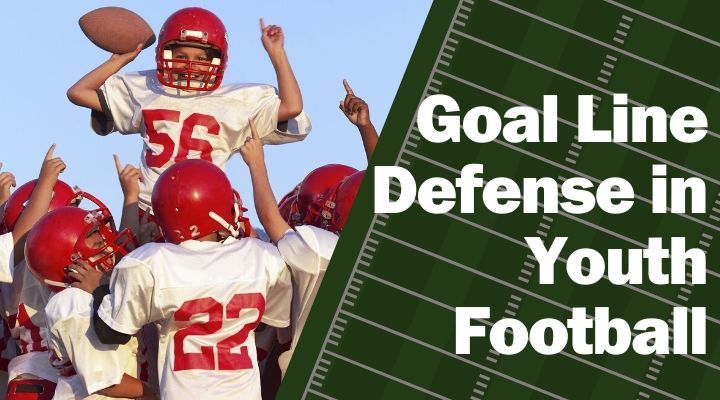 When the offense gets down around the goal line, it's time for the big boys to step up.

With a short field in front of them between the line of scrimmage and the goal line, offenses will switch up their strategy in order to put themselves in a better position to cross the goal line and score a touchdown.

Even passing-heavy offenses such as shotgun offenses or spread offenses will often substitute a plethora of skilled wide receivers for more big bodies up front in hopes of creating holes along the line of scrimmage for running backs to run through.

Because the end zone is only 10 yards deep, the offense must change how they approach each play to give themselves the best shot of scoring a touchdown.

It's difficult to have multiple wide receivers on the field in a goal-line situation, for example, because those receivers will clog up the same area of the field since they can't run deep patterns.

In response, defenses in youth football also must switch to a bigger-bodied formation, which is known as goal line defense.

A goal line defensive formation in youth football has only one aim in mind -- to prevent the offense from scoring a touchdown.

Ultimately, it would be great if they stopped the offense or forced a turnover, but even keeping them out of the end zone and forcing a field goal attempt would be considered a success.

Let's take a closer look at the formation of a goal line defense in youth football and the responsibilities of each level of the defense. Most youth football teams that are in a goal line situation will run what's known as either a 5-3 or 6-3 defense.

The 6-3 defense is probably the most common goal line defense formation in youth football.

Higher levels of the sport may use the 5-3 so that they have more defensive backs to defend against the pass.

The 6-3 defense will have two defensive ends--two defensive tackles and two nose guards lined up at the line of scrimmage in a three-point or even four-point stance.

Three linebackers (a Will, Mike, and Sam) will line up about two yards behind them, tight to the line of scrimmage, and fill the gaps between the defensive linemen.

The two defensive backs can either be cornerbacks or even safeties who will line up in between the linemen and linebackers in terms of depth, but outside the last offensive lineman on his side of the field.

Here is the breakdown of responsibilities for each level of the defense.

Some of the defensive linemen are going to face double teams at the line of scrimmage.

There will be seven offensive linemen versus six defensive linemen, plus the fullback who can chip in to help block as well. This means that double teams will happen along the line of scrimmage to try to open up a hole for a running back or quarterback to run through.

The key for the defensive linemen is that they must push forward hard immediately as the ball is snapped. They can't be pushed backward or step backward at all.

The defensive linemen's job isn’t to necessarily make a tackle. Instead, their primary job is to clog up holes along the line of scrimmage so that the ball carrier either runs into a wall of people or is forced to try to run outside, where linebackers and defensive backs will be waiting to make the tackle.

At the snap of the ball, all defensive linemen will head toward the interior of the offensive line. They will be responsible for plugging the gap that’s toward the inside of the line from where they are lined up -- or toward the center.

The key to not being pushed back and successfully plugging the hole is to keep their pad level low. And the best way to do that is to explode out of their stance from a low starting point.

This helps them start the play lower and keep themselves lower as the play develops. It also gives them extra leverage to explode forward.

Some goal line defenses in youth football will put extra pressure directly up the middle of the offense by lining up one of the nose guards directly opposite the center.

This means both nose guards will be focused on pushing the center back, which makes it extra difficult for the offense to run a quick quarterback sneak.

A goal line defense in youth football will employ the same three linebackers as most other defensive formations.

The biggest difference for linebackers in a goal line defense is that they will be lining up closer to the line of scrimmage than they normally do.

Linebackers have the most challenging job of any player in a goal line defense.

They line up back off the line of scrimmage so that they can see how the play is developing before they commit to how they'll attack the offense.

They must first recognize whether the play is a run or a pass and then act accordingly. But they must make this read and decide on how to act very quickly.

There isn't a lot of room for error since the offense is only a few yards at most from the end zone.

If the linebackers read that the play is a run, they must approach the line of scrimmage quickly to fill any holes that the blockers have been able to create. Their primary job is to stuff the ball carrier and make sure he doesn't cross the goal line.

The two outside linebackers also must recognize if the defensive line has been able to plug all the holes along the line, and following the ball carrier if he tries to bounce the play outside.

This requires them to have great split-second recognition as well as excellent lateral movement to run down the line of scrimmage and meet the ball carrier.

On passing plays, the two outside linebackers will be primarily responsible for covering the tight ends if they end up running a passing route.

If one or both of the tight ends don't run a route, then they will look to see if the defensive backs or middle linebacker need help in coverage, while also keeping an eye on the quarterback in case he decides to scramble.

The Mike linebacker will have primary coverage responsibility on the fullback on passing plays in a goal line defense.

If the linebacker doesn't run a route, the Mike will instead stay in the middle of the field to prevent a successful pass there, while also keeping an eye on the quarterback to ensure he doesn't scramble and score a touchdown.

In most cases, a goal line defense in youth football will employ two cornerbacks.

However, some coaches may opt instead to have one or two safeties on the field since they are often better tacklers yet still have decent coverage skills.

Either way, the defensive backs will line up outside the furthest outside offensive lineman on his side of the field and roughly two yards off the line of scrimmage.

Much like linebackers, the defensive backs must read the play first before making a definitive movement with how they’re going to react.

If the play is a run, then their job is to keep outside contain and not let the ball carrier to their outside.

If the ball carrier tries to bounce the play outside, the defensive backs have three options:

If the play is instead a pass, the defensive backs will have primary coverage responsibilities over the running backs in the backfield.

In most cases, the running backs will either be running fade or swing patterns, so the defensive backs must be prepared to run laterally while also retreating a bit to gain depth.

The defensive backs also must keep in mind that they will have no help over the top from other defenders.

In this way, their coverage is a simple man-to-man scheme.

When the offense gets close to the end zone, coaches will substitute their skill players such as wide receivers for extra offensive linemen, tight ends, and running backs in an effort to gain a few yards on the ground to score a touchdown.

In response, defenses in youth football will employ a goal line formation of their own, stacking the line of scrimmage with six defensive linemen.

The aim of the goal line defense in youth football is to stop runners from crossing the goal line, forcing them to either turn the ball over on downs or even to attempt a field goal.