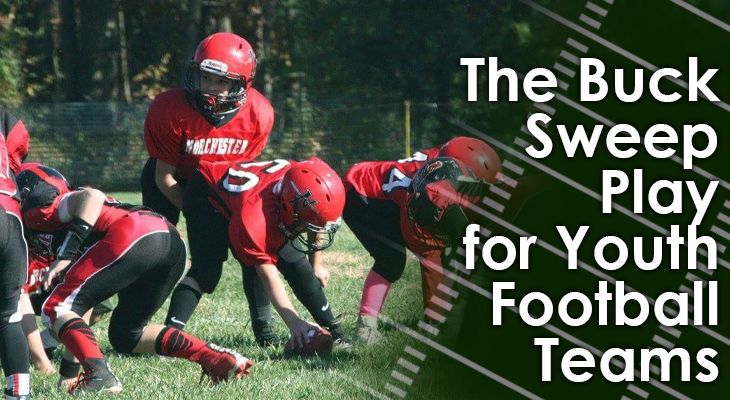 The Buck Sweep is one of the keystone plays in youth football.

It got its start from the Wing T formation, where the offense will take the field with the quarterback under center.

The Buck Sweep was created as a base play for the Wing T.

It includes pre-snap motion, a fake handoff to the fullback, and a handoff on the sweep to one of the wing backs.

The reason why the play is so successful is because it involves a lot of deception.

It makes linebackers pause before they react, giving the offense a head start against the defense... and it creates confusion along the defensive line as it involves pulling offensive guards.

As defenders try predict the Buck Sweep, it leaves them susceptible to straight handoffs up the middle.

This play has been run for so long and with such success that coaches at more advanced levels have begun to using it out of different formations.

Today, you'll see a version of the Buck Sweep run out of spread formations.

You'll see it in professional football leagues and even at the college level.

Now, let's focus on the Buck Sweep play -- including it's aims and how to run it. 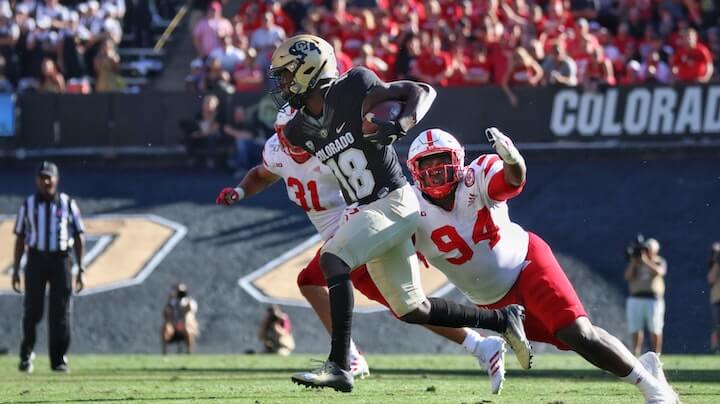 The Goal of the Buck Sweep

The Buck Sweep is a play designed to make the defense think the offense is going to run the ball straight up the gut.

Instead, though, it will turn into a sweep play to the outside.

The Buck Sweep utilizes a lot of misdirection to truly sell the inside run to linebackers and safeties.

The man in motion prior to the snap will force these defenders to also make adjustments to how they're thinking and where they're positioned.

Hopefully, that will take them out of position for what's to come.

After the snap, the pulling guards will cause even more confusion along the defensive line.

With blockers abandoning their positions, the defensive linemen may get confused and not see the blockers from the sides.

The goal is to have blockers seal off the outside of the field, allowing the wing back to get into open space with the ball in his hands for a huge gain.

The Buck Sweep is most effective when it's set up over time throughout a game. Offenses can do this by lining up in this same formation often.

They can run the wing backs in motion pre-snap, but then run straight handoffs up the middle to the fullback. They can even run pass plays when sending the wing back in motion.

This will continue to keep the defense off balance until you finally do run the Buck Sweep.

Even if defenses expect it, it's hard to defend it because it's so quick-hitting.

Blockers are on defenders, and the wing back is running with the ball at full speed immediately after the snap.

How to Run the Buck Sweep

First, let's talk about the alignment:

Then, let's talk about responsibilities:

The two wide receivers are responsible for sealing off the cornerbacks.

The left offensive tackle needs to get to the second level and block the Will linebacker, leaving the defensive end on his side unblocked.

The center and right offensive guard will block down on the defensive tackles. Their job is to seal them off from the right side of the field.

The right wing back is responsible for doing the same on the right defensive end.

The two guards will both pull from their positions to the right side of the field. The left guard will turn up field just outside the right wing back. He's responsible for picking up the Sam linebacker. The right guard will take a slightly wider path and look to block the strong safety.

Pre-snap, the quarterback will send the left wing back in motion. He'll take a diagonal route to right behind where the fullback is lined up.

When the quarterback receives the snap, he'll open to his left and fake a handoff to the fullback. The fullback will act as if he took the handoff and head through the A gap on the left side of the field.

After faking the handoff to the fullback, the quarterback will then hand the ball off to the left wing back who started in motion. The fullback will sprint out wide to the right and turn upfield after he gets beyond where the right wing back lined up. He'll follow his blockers to gain as many yards as possible.

The quarterback needs to "finish the play" by sprinting out to his left after he hands the ball off to the wing back. This will set up potential plays later in the game where the quarterback keeps the ball and runs it himself.

The Buck Sweep is one of the most successful plays in youth football.

Traditionally run out of the Wing T formation, some higher levels of football have begun to adopt the play and run it out of different formations, such as the spread.

The play is so successful because it's relatively easy for youth offenses to run, and it keeps defenses off-balance.

The play is also great because it sets up plenty of other plays that can be run throughout a game -- and vice versa.