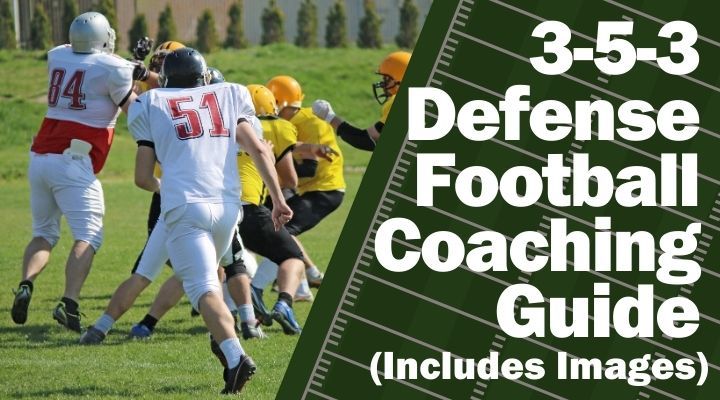 Most defensive coaches are familiar with the two most popular base defenses:

But for coaches looking for something a little different to optimize to a specific group of players or looking to keep offenses off-balance, a 3-5-3 defense might be a great option.

The 3-5-3 defensive alignment isn’t a formation that you see every day in football.

That’s mainly because it employs five linebackers on the field at all times, and requires the two Hybrid linebackers, as they’re called, to be very versatile – solid against the pass and the run.

Because of this fact, though, most offenses don’t know how to handle the 3-5-3 formation. They’re not used to facing it in games, and there isn’t a lot of videotapes that they can study in advance.

For that reason, it’s a great defensive formation for keeping offenses guessing.

A 3-5-3 formation can be real good for a team that runs the 3-4 base defense more than they run the 4-3 base defense, and that also has an extra linebacker that they can play on the field.

For this alignment, it’s also possible that the strong safety can become that fifth linebacker if he’s very solid against both the run and the pass and can read and adjust to plays quickly.

The 3-5-3 defense provides a lot of options in terms of pressure and blitzes, as all five linebackers could be deployed to rush the line of scrimmage on any given play.

This means that offensive linemen have to constantly have their head on a swivel, searching around for where the pressure is coming from.

Due to this, the 3-5-3 formation can be a lot of fun for a defense to deploy, as linebackers could have a field day in the offensive backfield. There aren’t a lot of teams that consistently use the 3-5-3 defensive formation, and as a result, offenses aren’t familiar with seeing it.

This can cause a lot of confusion on offense, especially for offensive linemen who must quickly identify their blocking assignment at the snap of the ball.

The defensive personnel used in a 3-5-3 isn’t all that different from the personnel of a base 3-4 defense. This is especially true if you just take your strong safety and make him the fifth linebacker.

It’s not an entirely new formation but rather a wrinkle on a well-known one.

Five linebackers on the field can all have a running head start on getting to and through the line of scrimmage on every play.

This often forces the offense to make quick decisions and prevents the quarterback from holding onto the ball while passing routes develop.

4. Good Against Run and Pass

Defenses that run the 3-5-3 can rest assured that it can be successful against both the pass and the run, as long as the two Hybrid linebackers can read plays well and then react to them quickly.

Some teams have trouble getting four linebackers on the field at one time, which is why they opt for a 4-3 base defense.

But now the 3-5-3 requires five linebackers.

Not all teams have the player personnel to be able to do that effectively.

2. Can Be Susceptible to Pass

To counteract the pressure of the 3-5-3 defense, offenses will often spread the field with multiple wide receivers.

This requires the Hybrid linebackers to match up against speedier wide receivers, who they might not be able to keep up with.

While the 3-5-3 hides the pressure on any given play, it also gives offensive linemen time to see where the pressure is coming from and where their blocking assignment is.

That’s because, with only three down defensive linemen in front of them, at least two offensive linemen will have clear vision to the second level on every play.

The 3-5-3 defense sacrifices a strong safety for an extra linebacker.

This means there are only three players in the secondary, taking away an added level of security for deep passes over the top. In fact, the alignments and the primary responsibilities are very close to the same.

The personnel is made up of a big-bodied nose tackle and two defensive ends.

The nose tackle will line up opposite the center. His primary responsibility is to clog up the middle of the offensive line as best he can every play.

He’s tasked with doing his best to tie up not only the center but also the offensive guard in the A gap to which he’s assigned on that play.

The nose tackle might be asked to do a strong-side slant on one play, meaning he’ll attack the A gap on the strong side of the offense – most often where the tight end lines up.

He might also be asked to do a weak-side slant, which entails him going away from the strong side of the offense.

In either case, though, the nose tackle’s job is to just take up as much space as possible, and make it as hard as possible for the offensive guard to release and block someone else.

The defensive ends in a 3-5-3 will have a slightly different alignment and gap responsibility than they do in a 3-4.

In the 3-5-3, the ends will line up over the offensive tackles.

Unlike the 3-4, though, the ends could have both B gap and C gap assignments out of this formation.

That’s because the extra Hybrid linebackers are the ones who’ll provide the outside contain responsibilities, allowing defensive coaches to call a play where the ends attack inside the offensive formation, instead of always outside.

The defensive ends aren’t just asked to clog up offensive linemen, though.

As in any formation, they’re asked to break through the offensive line and cause havoc in the backfield on every play. The five linebackers in a 3-5-3 formation are made up of the three traditional linebackers of a 4-3 plus two Hybrid linebackers.

The responsibilities of the three traditional linebackers are a little different than what they do in other base defenses.

The Mike will line up over the nose tackle, while the Sam will shade on the outside of the defensive end toward the strong side of the offense.

Both of these players will have similar responsibilities to the inside linebackers of a 3-4 defense.

Both the Mike and the Sam’s primary responsibilities are clogging up the middle of the offensive line.

The Mike will have primary responsibility on the A gap that the nose tackle isn’t clogging up, while the Sam will either take the B gap or C gap that the defensive end on his side of the field isn’t responsible for.

The Will, on the other hand, will operate more like a Will in a 4-3 defense.

In this regard, he’ll have more free reign, since a blocker on his side of the field won’t often be in his face, as they’re dealing with either the nose tackle, defensive end, or Mike.

That makes the Will’s responsibility to blitz the quarterback, rush the line of scrimmage through open holes against the run, or drop back into pass coverage over the middle of the field.

The two Hybrid linebackers must truly be hybrid players – players who are both good stuffing the run and good dropping into pass coverage.

The Hybrid spot is good for any player who can fit that mold and doesn’t have a defined strength against either just the run or just the pass.

This is why players who line up sometimes as strong safeties could make a good fit.

The Hybrid linebackers will line up outside the Sam and the Will and between the two cornerbacks.

It’s essential for the Hybrids to be able to read run or pass as quickly as possible at the snap of the ball.

If it’s run, they have outside contain responsibilities and must not let any runner outside of him.

If it’s pass, they must drop back into coverage.

The Hybrid linebackers must be quick on their feet because their pass coverage responsibilities are often faster players. The secondary in a 3-5-3 defense sacrifices a player for that extra Hybrid linebacker.

That means there are only two cornerbacks and a free safety on the field at all times in this formation.

The responsibilities for these players are very simple: Cover their players or zone against the pass and funnel ball carriers to the inside against the run.

The cornerbacks will line up across from the wide receivers, while the free safety will play in a centerfield position behind the Mike.

On run plays, the free safety needs to recognize the ball carrier and approach him, while making sure no one gets behind him since he’s the last line of defense.

In most cases, a 3-5-3 will deploy a hybrid coverage for the secondary.

This would entail both cornerbacks having man-to-man coverage responsibility for the wide receivers, with the free safety scanning the field and helping out any of the players who need it.

This could mean the free safety could help a cornerback or also the Hybrid linebackers, depending on the situation.

If a defensive coach opts for a full zone coverage, the three players in the secondary will drop back to a deeper depth and split the field in three, sideline to sideline, covering whoever enters that zone.

In a pure man-to-man, the cornerbacks will take the wide receivers, while the free safety will match up with either a tight end or running back most of the time.

For that reason, it could be a great option for defenses that are looking to keep offenses on their toes.

The formation can cause a lot of confusion both in terms of how the defense lines up and where the pressure is coming from at all times.

At the same time, a 3-5-3 defense can only really be effective if your team has two versatile players who can play the Hybrid linebacker positions.

These are players who need to be very good at reading a play to identify pass or run, and who are equally as good stuffing a running play as they are dropping into coverage on a passing play.

Because of this, and because it’s a non-familiar defensive formation, the 3-5-3 is often not run at the lower levels of inexperienced youth football.

It can sometimes be hard to teach, and some of the responsibilities are more advanced than the players’ knowledge of the game at that point in their playing days.