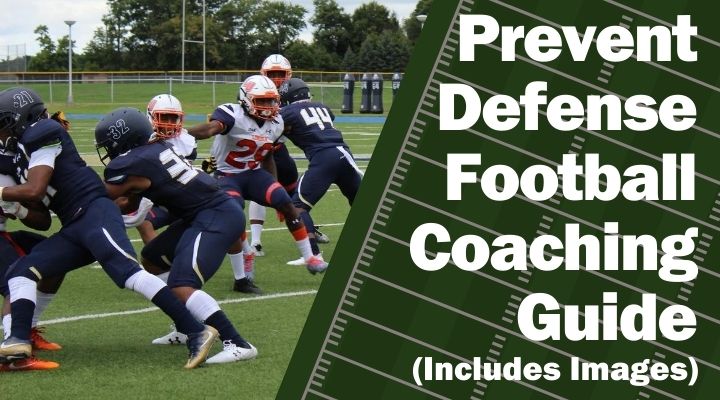 Some people believe that all a prevent defense prevents is a defense from stopping an offense.

Others believe that a well-executed prevent defense can ensure that their team closes out a win -- even if it allows a score or yardage gained en route to doing so.

The prevent defense is a type of defensive scheme that’s run in certain situations. Specifically, a team may employ a prevent defense when they have a big lead late in a game.

The idea is to prevent the offense from scoring by protecting primarily against deep passes.

The defense will rush only 4 players and drop the other 7 on the field into coverage to do so.

This may give the quarterback more time to find an open receiver, but the trade-off is that there’ll be more defenders to prevent completions from being made.

Offenses will often be able to move the ball downfield against prevent defenses, but that's okay.

The defense is only looking to limit touchdowns from being scored and is okay with giving up shorter gains because it’ll keep the clock running.

All defenders on the field are tasked with one main thing -- to keep the ball in front of them and not allow any players to get behind them.

Let's take a closer look at how the prevent defense is run and when it should be run. 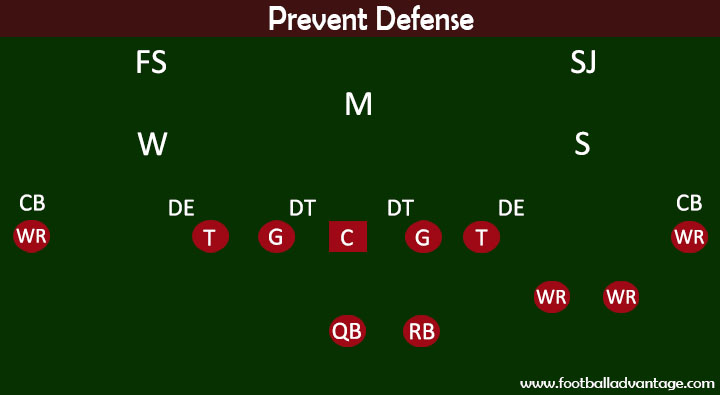 Who Should Use the Prevent Defense?

Any team can run the prevent defense, but it isn't a better fit for teams that use a 3-4 or 4-3 base defense.

Whether a team should or shouldn't run a prevent defense depends on the game situation.

Teams that have a big lead in the 4th quarter could consider using a prevent defense.

If a team has a 14-point lead with 5 minutes left in the game, for example, it’d be okay for them to let the offense march down the field and into field goal range.

On the other hand, if a team is losing or has only a small lead late in the game, it wouldn't make sense to run a prevent defense.

That's because allowing the offense to march down the field could be detrimental to the defensive team's chances of winning the game.

In other words, teams that are considering whether to run a prevent defense should consider the game situation and not the makeup of the players on their team.

This makes the prevent defense a much different type of defensive formation than others.

When a team has a big lead late in the game, the only thing they care about is keeping the clock running so the game will end.

On offense, that means running the football so the clock doesn't stop.

On defense, this means being okay with the offense completing short passes over the middle because it keeps the clock running.

The prevent defense can also be run in early-game situations.

For example, if the offense has a third-and-24 situation, a defense could run a prevent defense.

This would be designed to allow the offense to gain, say, 10-15 yards on a play.

That’d result in it being 4th down and forcing the offense to punt.

1. Allows a Lot of Yardage

By focusing on preventing only big plays, a prevent defense will often leave more open holes in the middle of the field.

Offenses often have a much easier time gaining yardage against a prevent defense than other base defensive formations.

That's why it's crucial that teams only run a prevent defense when they can afford to give up yardage.

If the offense is able to complete passes and move the ball down the field, they’ll eventually be given easier scoring opportunities.

Even big leads can evaporate quickly if the offense can score touchdowns relatively easily.

3. Doesn't Put Pressure on the Quarterback

Prevent defenses will drop 7 players into coverage on every play.

This often allows the quarterback more time to throw and pick apart holes in the defense.

How to Run the Prevent Defense: 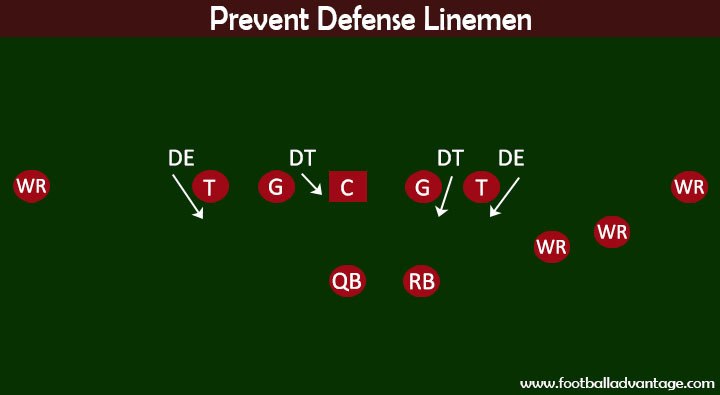 The defensive line in a prevent defense will look and operate in pretty much the same way that they would in any normal base 4-3 defense.

Even teams that typically run a 3-4 base formation will often go to a 4-3 for their prevent defense.

The linemen only have one responsibility in a prevent defense -- to rush the quarterback.

In just about every situation in which a prevent defense will be run, the offense will be throwing the football.

The defensive linemen, then, don't have to worry too much about plugging holes to stop the run.

They also don't have to worry about plugging holes along the line of scrimmage to open up spaces for other defenders to blitz through -- since all other defenders will be dropping into pass coverage.

Because they’re the only 4 players on the field during a prevent defense that’ll be rushing the quarterback, these players need to create as much pressure as they can.

Teams will often sub in their best pass-rushing defensive linemen in these defenses, even if those players aren't necessarily the starters at the position.

This means that defenses may want to look to smaller, quicker defensive linemen to be on the field when a prevent defense is being run. 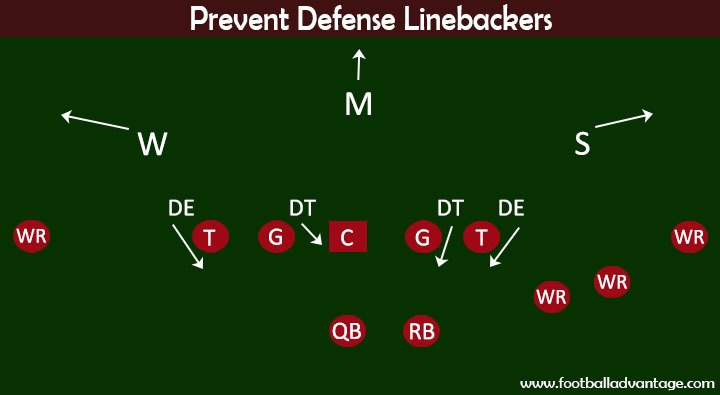 In a prevent defense, teams will have a few options for how they want to line up on the field with the rest of the players.

At the very least, there’ll be a middle linebacker (Mike) on the field.

The Mike linebacker will line up in the middle of the field but will be deeper than he usually is.

In a prevent defense, he'll line up roughly 10-12 yards off the line of scrimmage. At the snap of the ball, he’ll drop back into zone coverage.

His area of responsibility will be a circle roughly 15-20 yards off the line of scrimmage in the middle of the field.

The player who mans the strong-side linebacker (Sam) position will line up on the side of the field where the tight end is.

In many cases, there won't be a tight end of the field and he'll then line up on the strong side.

The player who mans the weak-side linebacker (Will) position will line up on the other side of the field.

Both outside linebackers will line up about 8-10 yards off the line of scrimmage. Their duties at the snap of the ball are to protect against the seam and hook routes on their side of the field.

Their first steps will be a curved backward move toward the outside of the field.

They'll be responsible for that area of the field that's roughly 13-15 yards off the line of scrimmage.

The linebackers' primary responsibility is to keep the ball in front of them.

If a pass is completed in front of them, that's okay. Their job, if this happens, is to make a clean tackle and not let a ball carrier get past them.

They also must try to keep any ball carrier from running out of bounds since that would stop the clock from running. 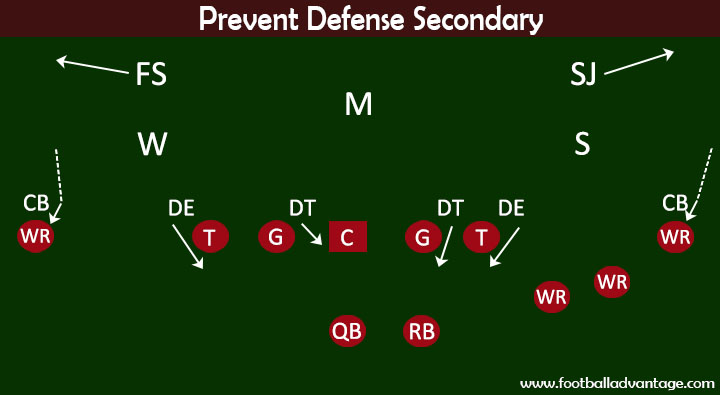 The traditional secondary will be used in a prevent defense.

That means the team's 2 primary cornerbacks, free safety, and strong safety will be on the field in a prevent defense.

Both cornerbacks will line up tight to the outside wide receivers.

At the snap of the ball, their job is to jam the wide receiver to make it harder for them to release freely and run a deep route down the sideline.

After doing this, the cornerback will then drop back deep and quick to defend against the longer passes.

Both safeties will have similar jobs as well.

They'll line up deeper than normal -- about 17-20 yards off the line of scrimmage on their side of the field.

When the ball snaps, their job is to drop back and read the play as it develops.

They absolutely can’t allow a wide receiver to get behind them.

So, if a receiver breaks free beyond a cornerback, they must close in and become the primary defender of that player.

If a pass is completed, all members of the secondary will have the same responsibility that the linebackers do.

They must not allow ball carriers to get behind them and not allow them to get out of bounds.

To do this, they either have to make a clean tackle themselves or angle themselves so as to force the ball carrier to run back toward the middle of the field, where other defenders should be waiting to make a tackle.

The prevent defense can be sort of a confusing defensive philosophy.

To do this, the defense will drop 7 players into coverage and rush the quarterback with only 4 defensive linemen.

These players in coverage won’t be tasked with preventing completions necessarily.

What they'll be asked to do is keep the play in front of them and keep the clock running by making sure ball carriers aren't able to run out of bounds.

For these reasons, the prevent defense can be run by any team no matter what their base defensive formation looks like.

However, it should only be run in certain game situations in which the defensive team has a big lead late in the game.

If the prevent defense is run in the wrong game situation, it could result in doing nothing but preventing that team from closing out a win.