Icing the Kicker: Does it Actually Work? (Answered) 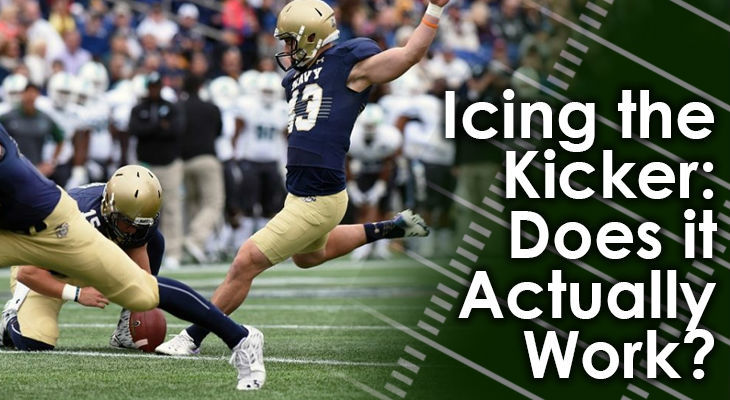 There are a lot of different strategies that football coaches employ to give their team an advantage in games.

One such strategy is strictly mental, though, and the merits of whether or not it works are constantly being debated.

The strategy to which we are referring here is known as icing the kicker.

Unlike other strategies in football -- such as specific offensive or defensive formations -- icing the kicker is designed to do one thing:

To get into the head of an opposing kicker as he is about to attempt a crucial kick attempt late in the game.

Other times, it doesn't.

Let's take a more in-depth look at what icing the kicker is, the theory behind it, and then break down whether or not the strategy actually works.

What is Icing the Kicker?

To ice a kicker, the head coach of the opposing team will call a timeout right before the ball is snapped on a crucial late-game kick attempt.

The idea is to disrupt the process of kicking the field goal, to get inside the kicker's head to hopefully make him miss the kick after the timeout.

Kickers are often very serious about their routines before, during, and after games, and especially so before a big kick, such as a game-tying or game-winning field goal attempt.

The idea is that by calling a timeout before the ball is even snapped on the kick attempt, the kicker will be forced to spend time thinking about the kick he is about to attempt, which may hopefully make him feel the true pressure of the situation.

He won't be able to just run on the field and attempt the kick as if it were any other situation in the game.

Instead, the timeout will give him time to think through just how important a situation it is.

He always attempted to call his timeout just before the snap of the ball on the kick attempt.

When he was successful in doing this, the ball would still be snapped and the kicker would still attempt his kick.

The idea behind this nuance of icing the kicker was that if the kicker made this kick that didn't count -- because the timeout was called -- then he may celebrate his success if he made it, and expel a lot of emotions.

Then, when he found out the kick didn't count, he'd have to get mentally prepared to do it all over again. So, Does Icing the Kicker Actually Work?

Now that it's clear what icing the kicker is, the question remains:

Does icing the kicker actually work?

Can opposing head coaches get into the head of kickers and influence the outcome of their kick simply by calling a timeout just before the kick is attempted?

The answer, perhaps surprisingly, is no.

During a 2017 Sunday Night Football game between the Pittsburgh Steelers and Green Bay Packers, then Packers head coach Mike McCarthy tried to ice Steelers kicker Chris Boswell as he was lining up to attempt a 53-yard field goal that would win the game for Pittsburgh.

After McCarthy called the timeout, NBC displayed an interesting statistic about icing the kicker:

Talk about a strategy that backfires, huh?

The statistic analyzed all lead-changing field goal attempts in the NFL during the last minute of the fourth quarter between 2007 and November 2017.

When no timeout was called to ice the kicker, 73% of the ensuring field goal attempts were successful.

When the kicker was iced, 78.1% of the ensuring field goal attempts were successful.

Other studies have said that icing the kicker "probably" works.

The American Statistical Association's Scott Berry said back in 2007 that icing the kicker works only when it is done before a kick attempt of "reasonable difficulty," or those of 40 yards or more.

When the kicker is iced in kick attempts such as those, the success probability of the kick drops about 10%, he said.

Why Coaches Still Ice the Kicker

The natural question that follows is…

If icing the kicker generally doesn't work, why do coaches at the collegiate and professional level still employ the tactic?

The two main reasons are pretty simple, when you think about it.

While timeouts are extremely valuable in both collegiate and professional football, it does you no good to not use all of them in a game.

You don't get extra points for not using your timeouts.

In other words, if an opponent is attempting a kick late in the game -- with less than a minute left in the fourth quarter, according to the NBC statistic -- then it's likely that if the coach doesn't use the timeout there, it will go to waste.

The theory here, then, is that it can't hurt trying.

Use it or lose it.

If the kicker misses a crucial late-game field goal after being iced, the natural response is that the head coach's strategy of calling a timeout before the snap of the ball was genius and had an effect on the outcome of the kick.

Even though, statistically speaking, the strategy may not have a true effect on the outcome of a kick attempt, coaches are likely to continue using it in late-game situations, as it certainly doesn't hurt to try.