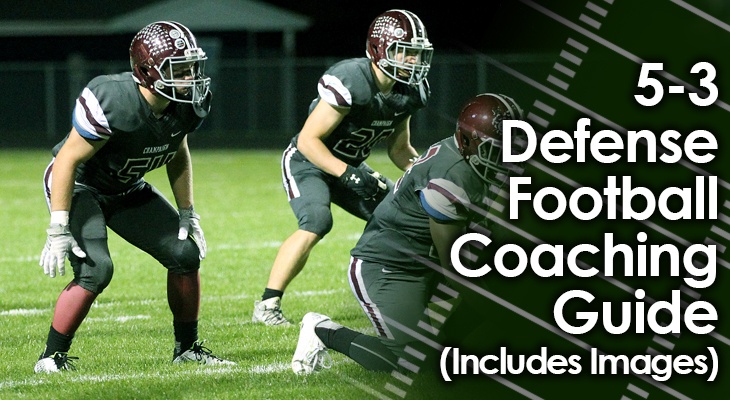 Many youth football coaches are looking for simplified schemes they can run to teach players who don’t have a lot of experience playing football.

These coaches are looking to teach the basic principles of both offense and defense first, so that their players can get a handle on the fundamental strategies of the sport.

Defensive coaches are often looking for simple one-gap schemes or defenses which don’t require their players to have multiple responsibilities.

That’s why the 5-3 defense is one of the more popular alignments for youth football teams.

While also allowing some flexibility in blitzing and coverage packages.

Who Should Use the 5-3 Defense? 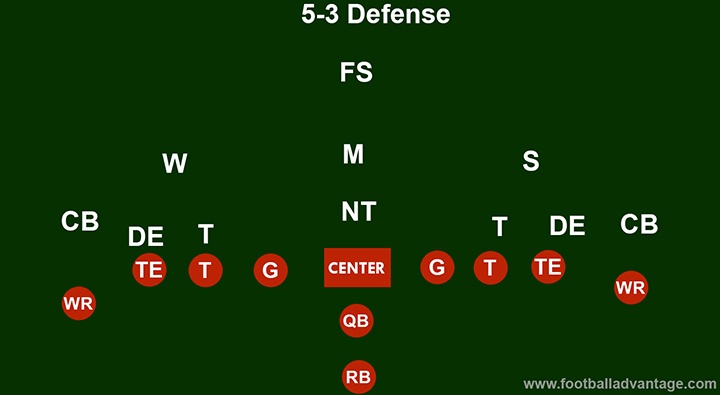 The 5-3 defensive formation is great for youth football teams because it’s a simplified defense that doesn’t require any player to have too many responsibilities.

It’s a great defense to teach containment, gap coverage, and primary duties on the field.

But the 5-3 defense isn’t just for the young, inexperienced team of football newbies…

It’s also an alignment that can be used as players get older and are more experienced, because it provides flexibility and adaptability in look, coverage and pressure.

The 5-3 defense is focused primarily on stacking the line of scrimmage with a lot of bodies, exchanging a defender in the secondary for another defender up front.

It’s often used against “jumbo” offense packages that utilize at least two tight ends and maybe even a fullback.

It’s a great option for stopping the run, by making it harder for the offensive line to block all the defenders who are lined up near the ball.

And it’s also good for zone coverage in the passing game and for applying pressure to the quarterback.

Stacks the Line - The 5-3 defense utilizes five down linemen at the snap of the ball, making it hard for offensive linemen to have vision downfield.

Extra Pressure at Point of Attack - This clogging at the line of scrimmage allows linebackers to stay hidden behind the defensive linemen, providing opportunities to create pressure with a blitz.

Great Against the Run - Having eight defenders in the box makes it very hard to establish a consistent running game on offense, as there isn’t a lot of room for running backs to go with the football even if the offensive line does a good job blocking.

Can Also be Good Against the Pass - The three linebackers can provide coverage against receivers over the middle of the field, and one of the defensive ends can even drop back in coverage, since there’s a glut of linemen in this formation.

Reduces Reaction Time - Quarterbacks and running backs have less time to make a play against the 5-3 defense because there are so many defenders close to the line of scrimmage at the snap of the ball.

Susceptible to Short Passes - Offenses will often try to attack a 5-3 defense with short passing routes. That’s because with one fewer defender in the secondary, there is a lot of room outside the hash marks for speedier receivers to take advantage of.

Hard to Run If Undersized - If your team doesn’t have a lot of big bodies to play along the line of scrimmage, then the 5-3 defense might not be good for you. This alignment requires bigger bodies up front more than anything, otherwise your defenders could get pushed around.

Simplifies Things for the Offense, Too - While there are wrinkles you can run in your 5-3 defense, it’s often tough to disguise blitzes from the quarterback. That could allow the offense to take advantage by sticking to simple routes for receivers and runs toward the outside.

Secondary Needs Discipline - It’s essential that the secondary plays disciplined and sticks to their responsibilities, especially with one fewer defender at that level. 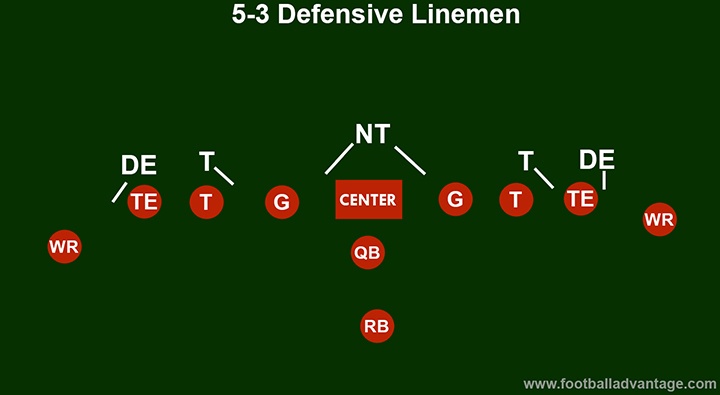 The defensive line in a 5-3 defense is stacked up front.

The nose tackle in this defense will line up in three possible positions:

Either directly over the head of the center or shaded toward his left or right shoulder.

And the nose tackle has one primary responsibility…

To attack either A gap and clog up as much space as possible in the middle of the field.

The other two defensive tackles will most often line up over the offensive guards’ head or outside shoulder.

The defensive tackles will either have responsibility to fill the B gap on base defensive plays, or they could even stunt out wide to the C gap on blitzing plays (more on this later).

The two defensive ends in a 5-3 defense will line up in what’s known as a wide 9 technique, meaning on the outside shoulder of the last man on the line of scrimmage.

This player will be a tight end on both sides of the field if the offense is running a jumbo package, or it could be an offensive tackle if the offense has one tight end, a running back, and a fullback on the field.

While the nose tackle has almost the same responsibility on every play (either one of the A gaps), the defensive tackles and ends could have varying responsibilities.

However, the 5-3 defense also allows for the possibility of stunts and curls along the line of scrimmage.

In either of these situations, the defensive ends might drop back in coverage as either of the outside linebackers rush the line on a blitz.

The ends might also run a stunt, where they curl around the back of the defensive tackle and attack the B gap to surprise the offensive line.

In both of these cases, the defensive tackles would stunt outside to the C gap with outside containment responsibilities, filling the void the ends left when they curled or dropped into pass coverage. 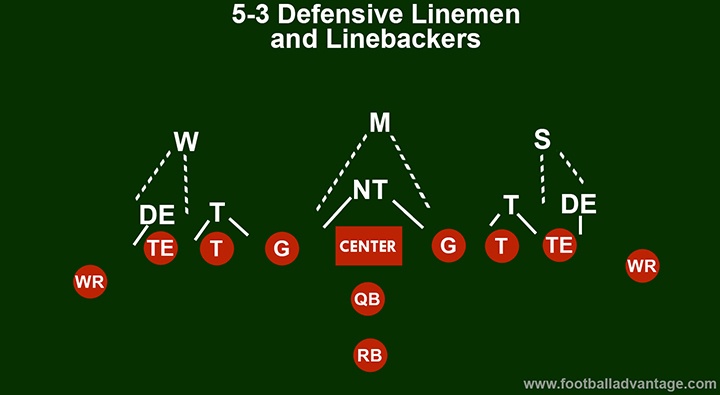 The positioning on the field pre-snap is the same every play for all three players at this level of the defense, and their responsibilities in a base defense are the same as well.

The Mike will line up almost directly behind the nose tackle or shaded over either one of his shoulders.

On passing plays, the Mike is most often responsible for dropping into cover over the middle of the field.

The Mike will sometimes, but rarely, blitz on a passing play.

The Will and Sam will line up in similar positions and have similar responsibilities on their side of the field.

Both outside linebackers will line up somewhere between the defensive tackle and defensive end on their side of the field.

In a base defense against a running play, the outside linebackers have primary responsibility over the B and C gaps.

These responsibilities will shift based on where both the defensive tackle and defensive end on their side of the field is going at the snap of the ball.

In a base, man-to-man defense against a passing play, both outside linebackers will have coverage responsibilities on the tight end on their side of the field, if that player ends up running a route.

In a base zone defense against a passing play, the outside linebackers will be responsible for covering any player who runs a route inside an imaginary box that covers an area from the line of scrimmage to a few yards behind where they line up initially.

The Sam and Will are also the two players who will most often blitz out of a 5-3 defensive alignment.

This is because they are the players who can be hidden the most behind the stacked defensive line.

With stunts of the tackle and end up front, the Sam or Will linebacker (or both) could both be asked to blitz through either the B or C gaps on their side of the field on any given play, with the defensive end on that side dropping back into pass coverage if need be. 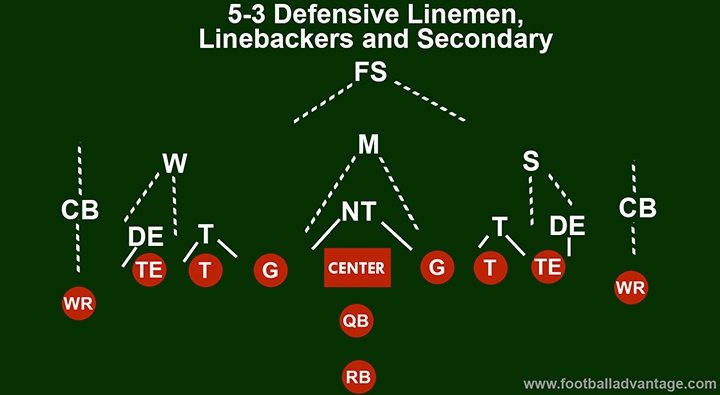 The secondary in a 5-3 defense has only three players as the back line of the defense.

There are two cornerbacks and a free safety in this formation, which foregoes the traditional strong safety for an extra player along the defensive line.

Because there are only three players in the secondary, the cornerbacks and free safety must provide superior coverage on pass plays and try to funnel all ball carriers to the middle of the field where the linebackers can help to tackle.

As usual, the cornerbacks will line up on the outside of the field opposite the wide receivers.

The free safety will line up most often in the middle of the field, a few yards behind the Mike linebacker.

If the defense is running a man-to-man scheme against a pass play, the cornerbacks will stay with the wide receivers in single coverage, while the free safety will have coverage responsibilities over either a running back or tight end.

In this scenario, it is essential that the secondary not let any of the opposing route runners get behind them, as there is no help over the top.

In zone coverage schemes out of a 5-3 defense, each player will take coverage responsibilities for a section of the field.

The cornerbacks will cover from the hash marks to the sideline back to a certain depth on the field, while the free safety will have over-the-top coverage responsibility on both sides of the field.

The free safety will obviously shade to wherever the ball ends up getting thrown, and will help close and tackle if a completion has been made.

Running a 5-3 defense is a great way to teach youth football players the basics of the game because its principles are simple and straightforward.

While there can be plenty of wrinkles added to this scheme, a defense can run mainly base plays every time on the field and still be very successful.

This is especially true in youth football, because most offenses are run heavy, as they haven’t developed enough strength to throw the football far downfield.

However, as players get older and their bodies grow as well, the 5-3 defense doesn’t have to go by the wayside…

This is where the flexibility of the alignment can come into play full force.

With stunts along the defensive line and blitzes coming from the outside linebackers, a 5-3 defense can cause the offensive line all sorts of fits as they try to recognize where the pressure is going to be coming from on any given play.

The one potential downside to running a 5-3 defense would be against an offense that has the ability to throw the ball often.

This alignment would not be good against a spread offense, for example, because the extra speed the offense has on the field would easily be able to take advantage of the defense’s lack of speed.

Plus, with only three players in the secondary, there could be a big play waiting to happen at any turn.

Most of the teams in Florida run the spread. I have been running man with a free safety.

My question is this on the 5-3-3. How do you defend teams with trips and slots and motion.

right now I number receivers from the side lines in. Corners have 1. D ends have 2 and linebackers have 3.