How to Run an Effective Football Practice (In 7 Easy Steps) 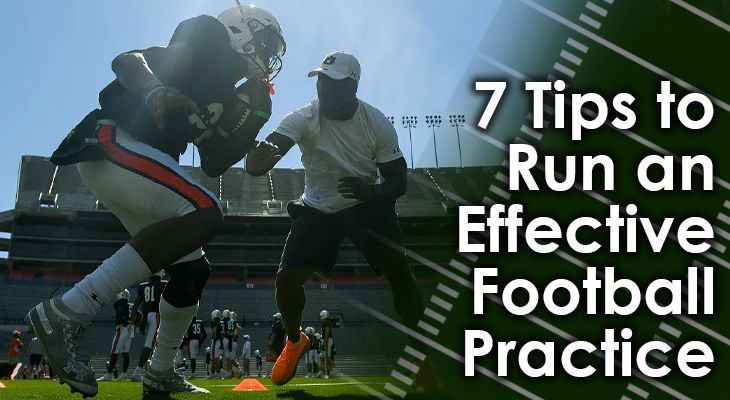 Running practices is one of the most important aspects of being a football coach.

While there's so much focus on games and which team wins or loses, the real time youth football players learn is during practice.

A well-run football practice will teach players great on-field skills as well as valuable lessons they will take with them throughout their entire lives.

They should also involve a lot of fun!

Here are 7 tips you can use to run an effective football practice for all your players.

Every practice should begin with the kids going through a series of stretches and warm-ups.

This helps the players get loose and avoid injury as they're about to get into the more strenuous parts of the practice.

This is also a good opportunity to start helping players build their leadership skills.

After coaches lead stretches for a while and teach the players what to do, you can have team captains lead certain sections of this part of practice.

You can even rotate the players who lead the stretching, and it doesn't always have to be team captains. That way, every player gets his chance.

It's important that players are properly stretched and warmed up before they do this, as conditioning often involves a lot of sprinting and changing directions quickly.

The overall point of conditioning is to build up each players' stamina.

By doing this at the beginning of practice (and at the end), you'll be helping players build stamina over a long period of time.

You should keep the conditioning exercises limited to about 10 minutes tops.

Some drills could include basic sprints, shuffles, backpedals and other drills that will force players to sprint in quick spurts, followed by short periods of rest.

You certainly don't want to overwork your players here. The idea instead is to get their hearts pumping and have them work up their stamina so they can sustain the entirety of a game.

#3. Break Up into Positions

Now comes the positional portion of the practice.

If your games are on weekends, for example, you could use this basic weekly practice schedule:

Depending on the day of the week, you would split all your players into their position groups, where they'll work on position-specific drills to build the necessary skills.

Positional coaches should start by running the players through individual techniques.

For defensive backs, for instance, this could include backpedaling drills and other drills related to jamming receivers at the line and recovering into coverage.

The first part of these positional drills should last for about 10-20 minutes or so.

After this point, have the players take a break.

You can use this time to talk to the players about the technical aspects of their position.

Review in general what players need to focus on, and make sure to build up their confidence by telling them what a good job they've done.

At this point, you can also work in some game preparation to the positional drills.

Discuss with each position what the upcoming opponent is likely to run in terms of formations and specific plays.

Then, show them what that would look like through a "scout team" or by setting up dummy bags to represent players.

Then, discuss how they can counter whatever will be thrown at them by using different techniques, stances or approaches. 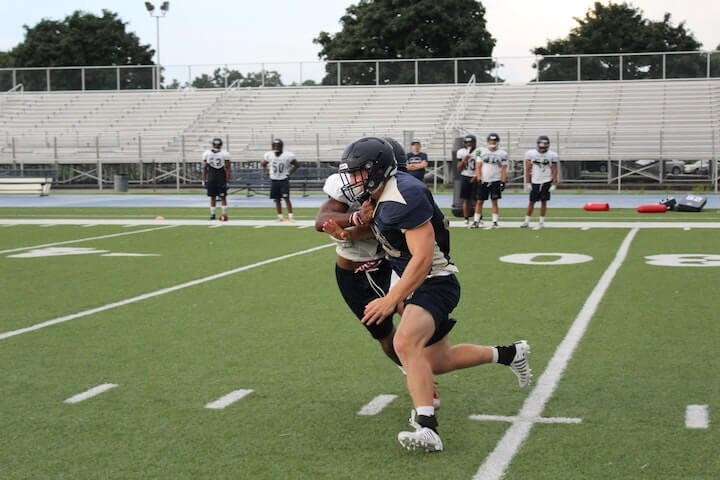 At this point, most coaches will opt to move back into full team drills.

Full team drills will involve having all three (3) of your positions come together for either the offense or defense.

Here, you'll work on your team's own specific plays and run them against a scout team that will be running plays from the upcoming opponent.

If it's a defensive day, for example, you'll have a scout team run the opposition's offense, and vice versa. This is where you'll work to get all the reps in with the entire team.

A great tip for running this part of practice is to take time between each play -- especially if you're coaching youth football.

Have all of the position coaches pay attention to their players, and after each play is run, take a few minutes to discuss with the position groups what they did well, what to look out for and how they can get even better.

The important thing is not to run a lot of plays, but rather to give the players hands-on experience in a full-team environment.

This will allow them to understand the different fronts they will face on offense and defense, and prepare specifically for the game plan that you create.

Another important tip is to run these drills at basically half the speed.

It can be very easy for players to want to go full speed and full contact during these drills, since these will look a lot like a real game situation.

But, the idea of practice is to prepare players to make it through games healthy.

They won't be able to do that if they're sustaining as much contact as would be necessary if you're running your full team drills at full speed.

Going half speed will actually allow your players to see the plays develop, too, which is an added benefit.

This means that they'll actually be learning more at half speed, while also helping them avoid injury. 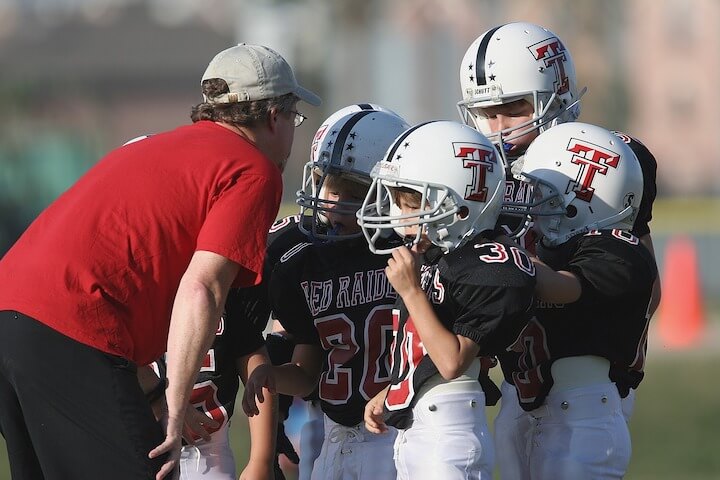 After the full team work, most coaches will opt for a relatively quick special teams portion of practice.

For example, you could do a schedule like this:

You could skip special teams practice altogether on Mondays, and work on whatever area you feel is most important to your team on Fridays.

While you won't be dedicating as much time to special teams, you'll be working on one aspect of this every single day.

A great tip is to emphasize just how important special teams are to the outcome of games.

Players should understand and know this so they try as hard for special teams as they do in other aspects of the game.

All your special teams drills should also be run at half speed -- except for the actual kickers and punters.

Again, this is to avoid injury, which can easily happen during special teams.

To get the heart rate going one final time, you should implement another round of conditioning after special teams drills.

This will help your players work on their stamina and understand that a game of football is a long grind.

They'll need to keep some fuel left in the tank to still play at a high level in the fourth quarter, for instance.

To get everyone on the same page, you can should these drills on a full-team basis.

They can be a little more intense than the earlier conditioning drills, but they should not last as long.

Keep in mind that you don't want to run your players into the ground, especially when they're younger.

The idea is not to punish them or to see them struggle. It's to help them build a skill or characteristic (in this case stamina), while building up their confidence.

To this end, coaches should consider running some of these conditioning drills with the players themselves.

This will show them that you're not just a drill sergeant and that you will go through the same pain they're going through.

Another great idea is to integrate some competition into this.

This is a great way to have the players work on their stamina while also making sure they're having fun. 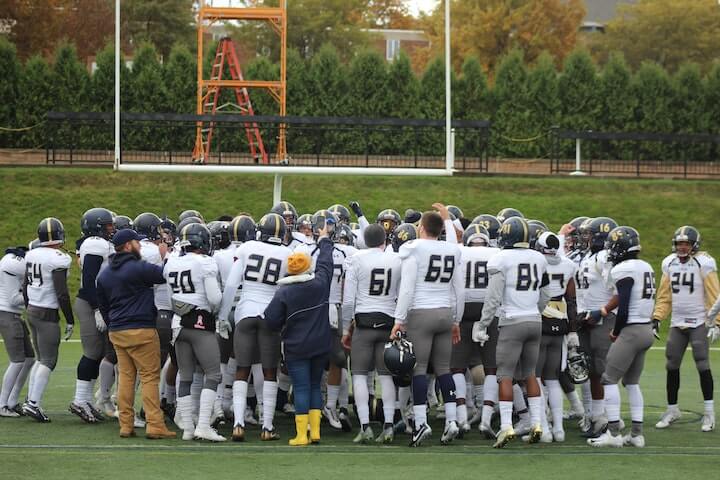 An essential part of any physical fitness regime is a cool-down period, and football practice is no exception.

Sprints can turn into jogs.

You can do shuffle drills at half speed.

You can backpedal at half speed.

You want the players to be able to cool their bodies down, while also working on football-specific skills at the same time.

This is yet another way in which you can effectively use every second of football practice to teach your players skills they'll need, while taking care of their bodies and their minds.

Coaches should be building their players up big time at this stage in the practice.

Commend them for all the effort they put in throughout practice. Tell everyone they did a great job, and tell them how excited you are for another day of practice tomorrow.

You can end the practice with a huddle up -- here, you can reiterate some major points of the practice, things to work on and one or two final words of encouragement.

Follow these tips, and you'll be running an effective and efficient football practice at all times.