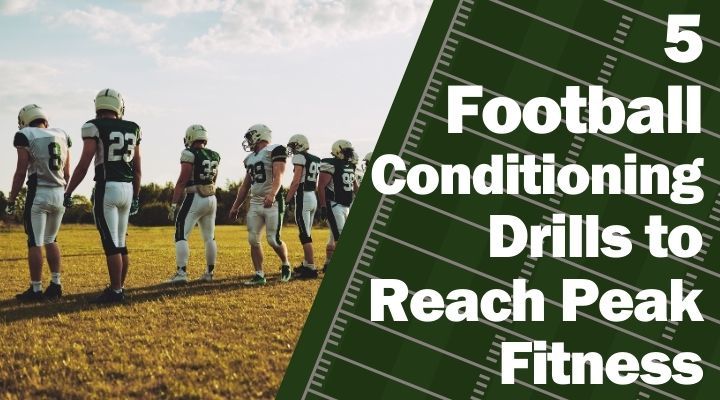 Football is a challenging game to play.

Even though there’s a break in between each play, change of possession, and quarter, all players are running at full speed throughout every play.

This is a lot different than some other sports such as baseball, basketball, or soccer.

In those sports, some players are standing still, jogging, or not running as fast as they wait for plays to develop.

In football, though, it's full speed ahead on every single play.

As a result, all players need to have the ability to withstand the rigors of the game -- no matter what position they play.

To ensure that they can exert this type of effort for each play, coaches have to make sure that their team is properly conditioned.

Sure, all players will get a break at points throughout the game. But the length of their breaks won't be considerably long.

Besides, there may be times where they spend 5-10 minutes of game time on the field in a row without any break at all.

While there are specific drills for each position group in football, there are also general drills that coaches need to use to make sure that their players are properly conditioned.

These football conditioning drills are usually implemented at the beginning and end of practices, and they’re done by the entire team together.

This makes these drills not only a good way to build up a team's conditioning, but it also helps the team build a good rapport among themselves.

Here are five football conditioning drills coaches should use to improve their entire team's conditioning. It's not all about the ability to sprint, run fast, and exert a ton of energy all at once. It's the ability to do it in quick spurts with a little rest before doing it again the very next play.

One of the best football conditioning drills for building this aspect of conditioning is called a sprint ladder.

You can have multiple players do this at the same time, too.

To start the drill, you have players line up at a starting point, spread out from each other in width to give them some space.

The first step of the ladder includes two sprints of 10 yards with a rest of 10 seconds between each sprint.

Once the players have completed this step of the ladder, they move onto the next one.

The second step is two sprints of 20 yards, with a 20-second rest in between each sprint.

The length of the sprints as well as the time of rest will increase until you get to 50 yards.

Then, the sprint length will progressively get shorter until it's back to 10 yards.

The ladder steps are as follows:

This drill helps players build their endurance through the increase of length of the sprints, but gives them more time to rest in between each sprint.

The reduction in length of sprint will help their body cool back down while still going in motion.

All players will run the same drill, regardless of the position they play.

This drill needs to be run one player at a time -- or at least staggered -- as players will be going around a set of cones to complete the drill.

If you want to have multiple players run the drill at the same time, you'll just need to set up multiple cones.

To set up one of these drills, you'll need four cones.

Create a square with these cones, with each cone separated 10 yards from the other.

When you use the cones to set up the four corners of the square, you'll be creating a 10-yard by 10-yard square.

To complete the drill, players will work their way around the outside of the square using a different technique to run from one cone to the next.

From the first to the second cone, players will backpedal.

Once he gets to that second cone, he'll switch to a shuffle and make his way to the third cone. He needs to make sure not to cross his feet when he shuffles.

At the third cone, the player will switch to doing the karaoke drill on his way to the fourth cone.

This drill will have the player switching with one foot forward and crossed over the other foot as they progress forward.

When they reach this fourth cone, they'll sprint back to the first cone where they started.

Once the players have finished this entire cycle, you can give them a one-minute rest and then have them run it again.

If you want to make this drill a little more challenging, you can implement different techniques for the players to use between the cones.

This can include high knees and the bear crawl, for example. Not all football conditioning drills are about sprinting or running fast all the time.

There are conditioning drills that will help players work on their endurance as well as their strength without running at all.

One of those such drills is called strides.

This drill is something you can run with multiple players at the same time by staggering when each player starts the drill.

To start, the player will line up in the corner of one of the end zones. He’ll take long strides down the entire sideline for 100 yards.

The pace should be somewhere between a jog and a sprint, and he should focus on taking long steps.

When the player reaches the opposite end zone, he should then jog across the end zone from one sideline to the next.

Upon reaching the other sideline, he should turn and stride down the sideline back to the other end zone, for another 100 yards of strides.

Once he reaches the other end zone, he'll then walk across the goal line back to the corner where he started.

Once he completes the cycle of this drill, he should be given a one-minute break to catch his breath. Then, you can put him through another of these cycles.

When you're first starting your endurance training, you should have players run through about 2-4 of these full cycles.

As your practices and season progress, you can increase the number of full cycles your players go through in a session of the drill.

This drill is a combination of techniques that you’ve used in previous football conditioning drills.

You'll be using the entire 100 yards of the field on this drill, too.

You can also run this drill with multiple players at the same time, having them spread out in width and all line up on the goal line.

To start, players will start at a goal line and sprint for 20 yards. They'll then stride for 20 yards after that.

Then, they'll continue to alternate between 20-yard sprints and 20-yard strides all the way downfield until they reach the opposite end zone.

Once players finish the entire 100 yards, they should rest for 30 seconds.

Then, they should turn around and do the same drill back to the other end zone.

When you first begin implementing this drill, players should do it in sets of four, with a 30-second break in between each 100-yard completion.

This will help them build up their endurance, as it'll be more challenging to finish each subsequent 100-yard set.

Again, as the season goes on, you can have players complete more than four sets of the sprint and stride combo drill.

This drill will simulate the endurance necessary to play all four quarters of a football game.

This drill will have multiple steps for each set which will signify one quarter.

First, players will sprint for 10 yards, then take a 10-second rest.

They'll then sprint for 30 yards with a 30-second rest.

The last step of this section of the drill will be a combo that should be performed in succession.

All of these parts will constitute one quarter of the drill. It’ll be done four times total to represent the four quarters of the game.

In between each quarter, players will get a rest of between two to three minutes.

This is one of the best football conditioning drills a coach can implement for his team once they've worked up their endurance over a few weeks of practice.

This drill will help players work on their sprinting and exerting of effort in a quick period of time, while also forcing the body to do this over a period of time.

The four quarters drill is one of the most representative of the conditioning and endurance that's required of a complete football game. Endurance is essential for all football players, regardless of which position they play.

The best way for coaches to have players work on their endurance is through football conditioning drills.

These are drills that all of your players should do together.

They’re often done at the beginning and end of practices in a team-wide effort, rather than separated by position.

Conditioning drills are great ways to make sure that players get their bodies acclimated to the running, effort, and endurance that's needed to make it through an entire four-quarter football game.