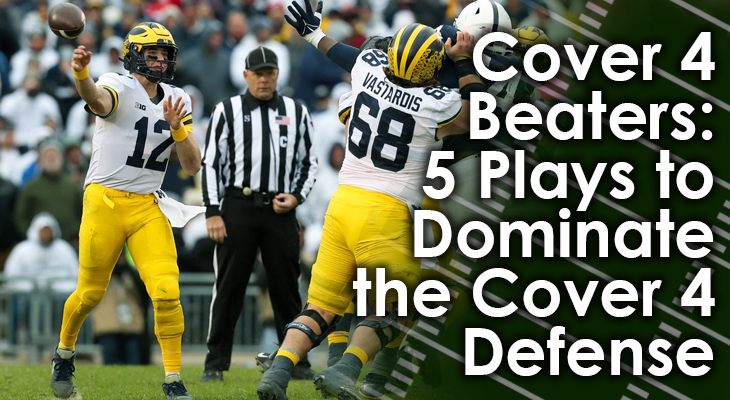 Cover 4 is one of the most popular defensive schemes in football.

Also known as Quarters Coverage, it includes having four defenders deep and three-under in a zone-type defensive scheme.

At the same time, it's very popular because defenses are able to use principles of man-to-man defensive schemes to allow either of the safeties to put double coverage on the offense's big-time receivers.

A lot of teams today use the Cover 4 for this reason, and for the fact that you can run many different coverages and packages out of it.

While it involves rushing four down defensive linemen on every play, you can run a lot of blitzes out of Cover 4, since you have the deep part of the field covered.

That said, there are some big holes in the Cover 4 that offensive coaches will be able to exploit by using well-designed offensive plays.

Below are some plays that you can call to beat the Cover 4 defense as well as a basic explanation of what it is.

If run properly, the Cover 4 defense has just about every area of the field covered.

There are, however, holes in this defensive scheme that offenses can take advantage of.

Here are five cover 4 beaters you can run to help your offense dominate. 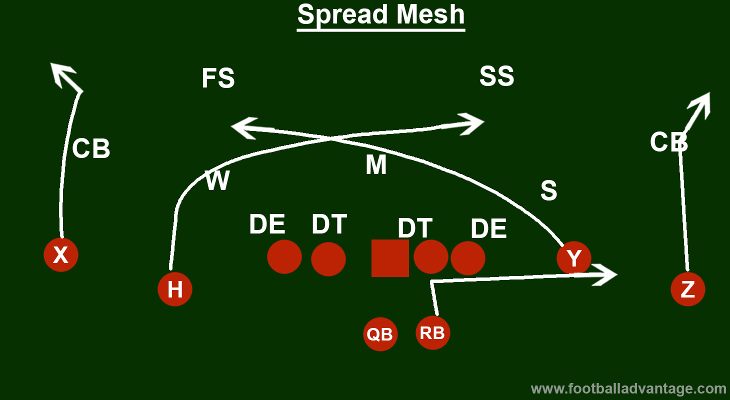 Spreading out the defense is one of the best ways to beat Cover 4.

When you have multiple receivers running routes, it causes multiple defenders to have to read and react -- especially if you run crossing routes and routes at different depths (like this play does).

On the outside, both the X and Z receivers will run Deep Corner patterns toward the sideline. This will draw at least the two cornerbacks deep.

Then, the H and Y receivers will run Crossing routes to the opposite side of the field.

At around seven yards beyond the line of scrimmage, their routes should cross each other, potentially causing defenders to bump into each other.

At the very least, the receivers will cross in front of the defenders' eyes, causing them to lose sight of someone.

The running back will run a Flat route and serve as the safety valve for the quarterback.

If the either or both of the safeties plays double coverage to the deep outside, there will be plenty of room in the middle.

If they stay in their lanes, both outside receivers will have one-on-one coverage against a cornerback deep. 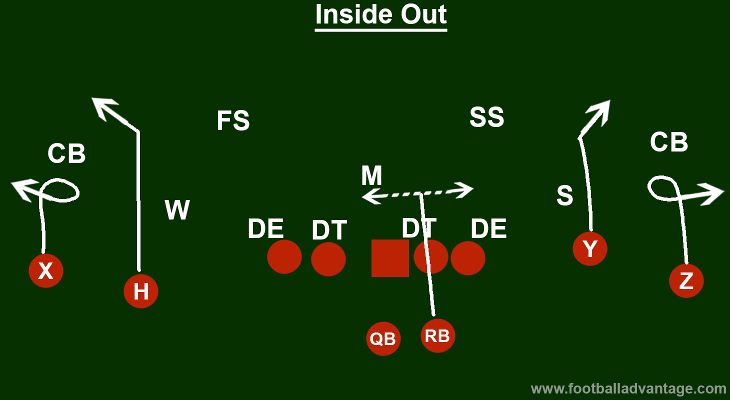 Another great Cover 4 beater is to take the above play and reverse the routes.

The outside receivers should each fake a Quick Slant route, and then curl back to the outside.

What this will do is entice the safeties in the middle of the field to come up and help the outside linebackers in coverage.

If they do that, they'll be leaving the inside receivers one-on-one with the cornerbacks, who will have a whole lot of field to make up to catch up to them.

The running back will run an Option route right over the middle. His goal in doing this is to just draw the attention of the Mike.

With the Mike occupied by the running back, he can't help with either of the flat routes. 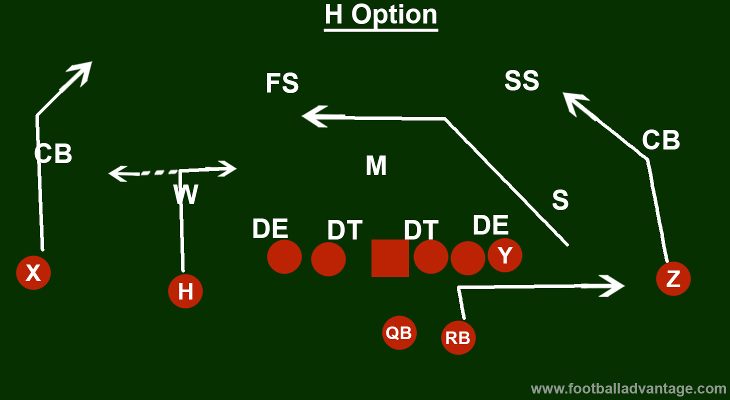 This play is meant to feast on the Mike and the safeties.

The two outside receivers will run Deep Posts toward the middle of the field.

The Y will run a Deep Slant that he'll end up squaring off to an Out toward the opposite side of the field where he lined up.

The H will run an Option route about seven yards beyond the line of scrimmage. If he goes toward the inside, the Mike should be the one who follows him.

Even if he goes outside, though, it's possible the Mike is drawn over to cover him, leaving tons of space behind him for the Y to roam.

The safeties will also likely move to the outside as the Z and X start entering their deep zones. If this happens, the Y will have even more free room on the field.

One or either of the safeties may creep up forward, though, as they see the Y get behind the Mike. If this happens, there again will be single coverage for each of the outside receivers. 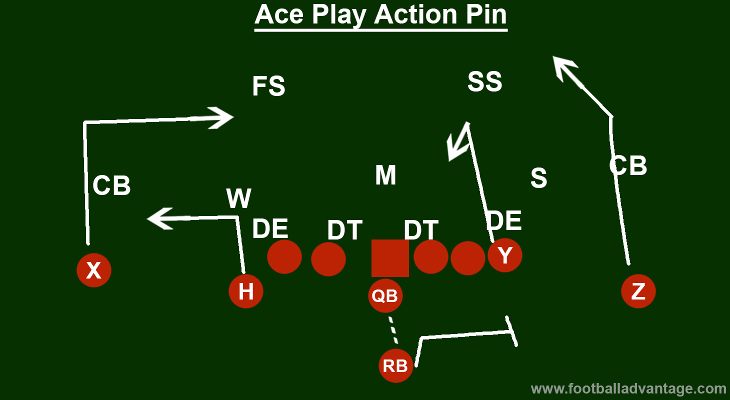 One of the best ways to beat Cover 4 is to use play-action passes.

Faking the run will feast on the tendencies of the safeties and Mike to both approach the line of scrimmage quickly on running plays.

If any of these players does that (moves forward with his first few steps), he's likely to be in a lot of trouble when he realizes it's a pass.

In this play, the quarterback will start under center and fake a direct handoff to the running back.

The back can either then run a swing route to the right or can stay in to help block.

Each of the other receivers will run a route at a different level, which will cause a lot of confusion and attack the defense in all the areas where it's susceptible.

The Y and H will each line up much tighter to the line of scrimmage, too, drawing the linebackers in closer to the box before the snap.

The Z will run a Deep Post, hoping to get behind the strong safety if he was caught off guard by the fake.

The X will run a Deep In pattern, the Y will run a Hitch route at about seven yards' depth, while the H will run a Quick Out route. 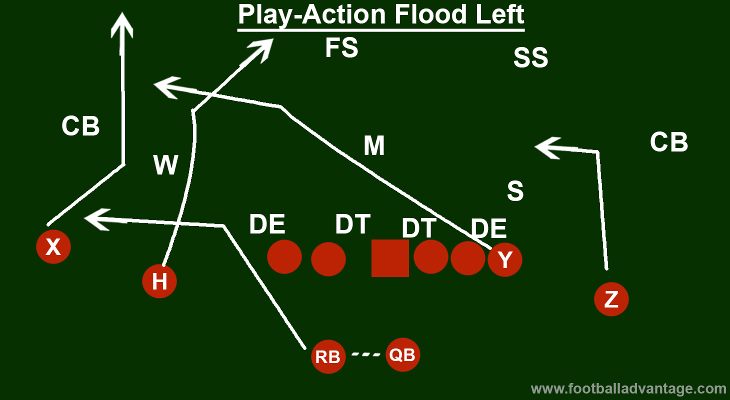 Another of the best Cover 4 beaters, this play uses play-action again to draw in the Mike and the safeties, but also floods the left side of the field with passing routes.

The quarterback will start the play in shotgun again, with the Y in tight to the line of scrimmage again.

The play will start with a fake handoff to the running back, who will then run a Quick Out route to the left.

Every other receiver, with the exception of the H, will be running their routes toward the left side of the field.

This play also utilizes different depth of routes to attack the defense, as well as crossing routes to cause plenty of confusion.

The X will run a Go route, but will start by making it look like he's running a Slant toward the middle.

The Y will run a Deep Slant that he'll end up squaring off to an In route. His route will cross with the H, who will be running a Deep Post.

The Z will run a Quick In route to the left as well. 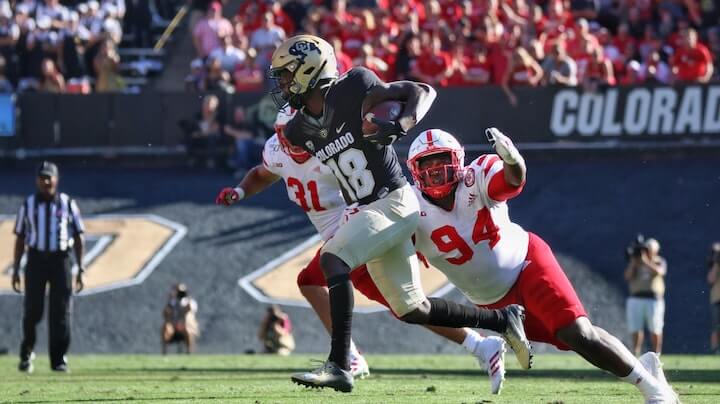 What is the Cover 4 Defense?

The Cover 4 defense will have all four members of the traditional secondary (two cornerbacks and two safeties) drop deep into coverage, with the three linebackers serving as the "under" coverage men.

The four members of the secondary will split the deep part of the field into quarters (which is how the defense gets its name) from sideline to sideline.

The cornerbacks will start plays aligned off the ball more, roughly seven yards back from the line of scrimmage. Safeties will align roughly 10 to 12 yards back.

The four down defensive linemen will be the only defenders who will rush the quarterback on most plays, though defensive coaches can certainly work in different blitz schemes out of Cover 4.

In essence, these three linebackers are splitting the "under" part of the field into thirds.

What the Cover 4 Aims to Do

The theory behind the Cover 4 is rather simple.

By essentially splitting the "under" portion of the field in thirds and the deep portion in fourths, it makes it very hard for any receiver to find open space to roam.

If all defenders are doing what they're supposed to do in coverage, there shouldn’t' be a lot of running room for receivers.

In addition, the Cover 4 allows players to integrate man-to-man principles into their coverage.

Safeties are able to double-up the offense's best receivers and still not give up too much space deep -- since there are four defenders there.

If there are only two receivers running a route, for example, they could each theoretically face double coverage, leaving the best passing routes run by tight ends and running backs, who are the offense's secondary receivers.

This can ultimately frustrate the offense and force the quarterback into poor decisions. 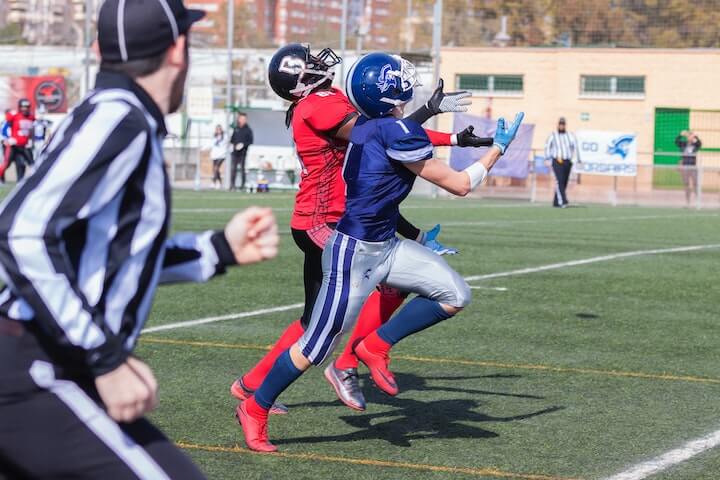 While the Cover 4 defense is a solid scheme that provides defenses with plenty of options, it can be exploited by smart offensive plays.

By spreading out the defense and attacking them at different levels, offensive coaches can cause a lot of confusion with passing routes.

Play-action passes are also a great way to exploit the Cover 4 defense, as it can force the safeties and Mike to get out of position right from the get go.

So, if you're looking for a few great Cover 4 beaters, start with these five plays above, and then branch out with similar concepts.