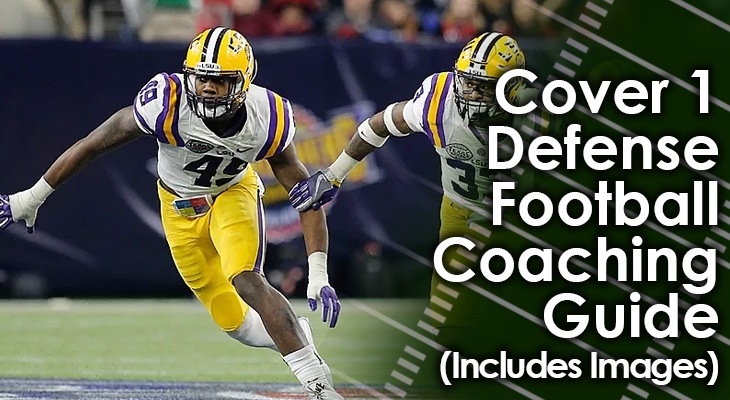 The Cover 1 defense is often the first defensive philosophy youth players are taught.

Because in its simplest form, a ‘Cover 1 defense’ is just a fancy term for man-to-man defense.

Is there anything easier than having each player in your defense responsible for covering another player on offense?

In slightly more advanced forms, the Cover 1 defense can be like a match-up zone defense in basketball...

Players are responsible for covering specific players on the other team, but there are also some players who roam free to provide extra support where it is needed on the field.

Because of its flexibility and the potential options it provides in terms of coverage and pressure, the Cover 1 defense has long-lasting power as an effective defensive formation no matter what age and experience level a coach may be dealing with.

Who Should Use the Cover 1 Defense? 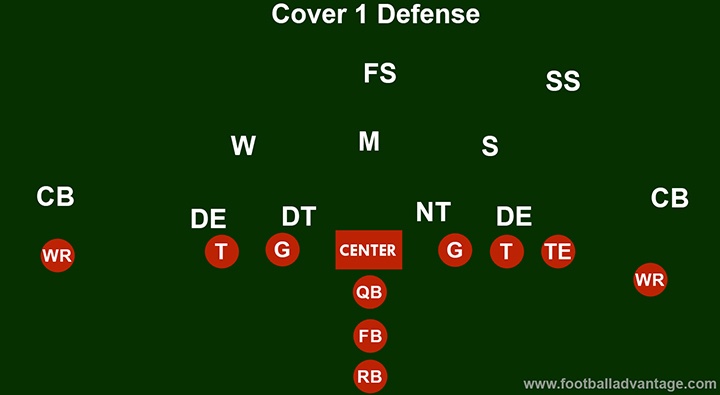 The Cover 1 defense can be used by any team, no matter what the makeup of the players on it and their specific skills and experience.

That’s because the Cover 1 is very simply a man-to-man style of defensive alignment.

It doesn’t require any special skill sets such as faster or stronger players...

Instead, because of the flexibility of the system, it can be deployed in different fashions to cater toward a speedier team, a bigger team, or even in passing or running situations.

Every football team should have some form of a Cover 1 defensive alignment in their arsenal.

Exactly how the Cover 1 is deployed, in what situations it’s deployed, and how much pressure is applied out of it can be adjusted on the fly as the game goes on…

Or can be determined before the game even starts based on the makeup of the offense the team is facing that game.

It’s Simple - The Cover 1 defense is easy to teach, learn, and execute at any level of play, because it is what everyone can understand – a man-to-man, match-up defense.

Not Reliant on Personnel - The Cover 1 defense is popular because it can be run by just about any team, no matter the physical makeup and skillset of the players on a specific team.

Can be Good Against the Run or Pass - Because it’s a match-up defense, the Cover 1 can be used against both running plays and passing plays. There aren’t any inherent weaknesses of the alignment against either the run or the pass.

It’s Flexible - Wrinkles to the Cover 1 defense can be put in all over the field. Pressure can come from both linebackers and players in the secondary. Or you can utilize the Cover 1 defense to not apply pressure and make sure every offensive player on the field is accounted for.

It Can be Deceptive - Because of the fact that so many wrinkles can be added to it, the Cover 1 defense can be deceptive. The pressure doesn’t always come from the same players, the same levels of defense, or the same side of the field.

Susceptible to Spread Formations - The Cover 1 defense works best against an offense that has two wide receivers, one tight end, and two running backs on the field. Offenses can take advantage by altering their personnel and bringing more wide receivers onto the field.

Easy to Scheme Against - Since a lot of teams run a Cover 1 defense, it’s a familiar look for offenses. That means they don’t have to prepare for a defensive scheme that is completely new to them.

Can Run or Throw Against It - Because it’s used in both passing and running downs, the offense can potentially have big plays against it no matter what play they run. In other words, a Cover 1 defense doesn’t force an offense to either run the ball or pass it.

Linebackers Have to Cover - One of the biggest keys to running a successful Cover 1 defense is having a set of linebackers who are not only able to cover receivers, but also are able to identify when they’re supposed to go out in coverage versus filling holes against the run

How to Run the Cover 1 Defense 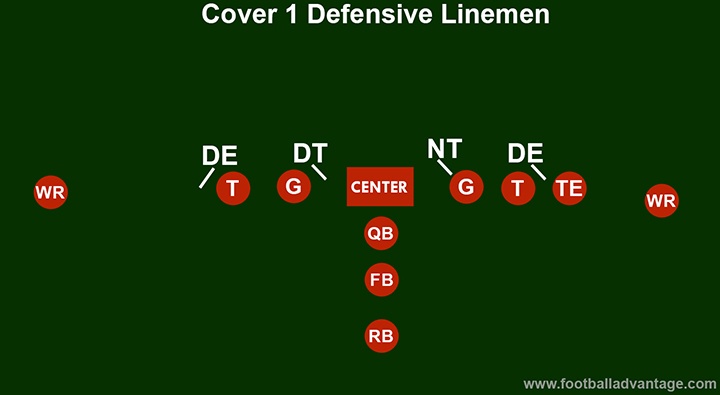 One of the tackles will be a nose tackle - most often the bigger, stronger of the two – who will line up more toward the ball.

The nose tackle’s pre-snap alignment has a larger range than in other defensive alignments...

Because of this, the nose tackle could have responsibilities of either the A gap or the B gap, depending on his pre-snap alignment and specific play call.

The other defensive tackle will line up almost exclusively over the offensive guard on the other side of the field.

This player also could have responsibilities to attack the A gap or the B gap, once again depending on his specific alignment before the ball is snapped and what defensive play is called.

The two defensive ends will split out wider in the alignment, over the inside shoulder, head up or outside shoulder of the offensive tackles.

If the offense employs a tight end on a specific play, the defensive end on that side of the field may even line up as wide as over top him.

In a Cover 1 alignment, the defensive line will most often be tasked with doing one thing…

Plugging the gaps for which they are responsible.

While there are certainly wrinkles that can be put into this alignment, more often than not, a defensive lineman in a Cover 1 defense will just be asked to attack straight forward or slant to his left or right.

A defensive coach can employ stunts with a defensive tackle and end on the same side of the field, and can even drop a defensive end into coverage on plays when a linebacker is blitzing.

However, Cover 1 defenses often do not integrate these types of changes to the system, unless it’s being done at a higher level of experience like in college or the professional ranks. 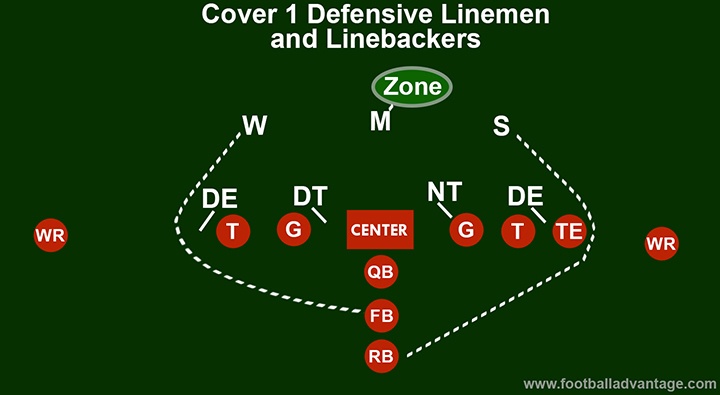 However, there is a little bit of variability when it comes to their exact positioning…

The Mike linebacker has a wider range of coverage potential in a Cover 1 defense.

He will line up in the middle of the field, and be responsible for the A and B gaps on either side of the center against run plays.

That means he could line up over top of either guard and anywhere in between.

Against passing plays, there are a few options for the Mike...

The Sam linebacker will be on the side of the field where the tight end lines up, or where the extra wide receiver is if there is no tight end.

On running plays, he will have primary run-stopping responsibilities in the B or C gaps on his side of the field, depending on what the players in front of him are doing and where the offense is running the ball.

Against the pass with no blitz, the Sam will most often be responsible for covering the first running back that runs a route.

If no running back ends up running a route, then the Sam will drop into a zone-like coverage on his side of the field.

The Sam linebacker could also be asked to blitz on a given play, or slide into the middle of the field to cover the void the Mike linebacker left if he blitzes.

The Will linebacker is on the weak side of the field, and is similarly responsible for the B or C gaps on that side against the run.

Against the pass, the Will’s primary responsibility would be the second running back that runs a route.

The Will can also be asked to perform a regular or delayed blitz, especially if that second running back stays into block.

Similar to the Sam, the Will could be asked to slide over into coverage in the middle of the field on plays where the Mike blitzes. 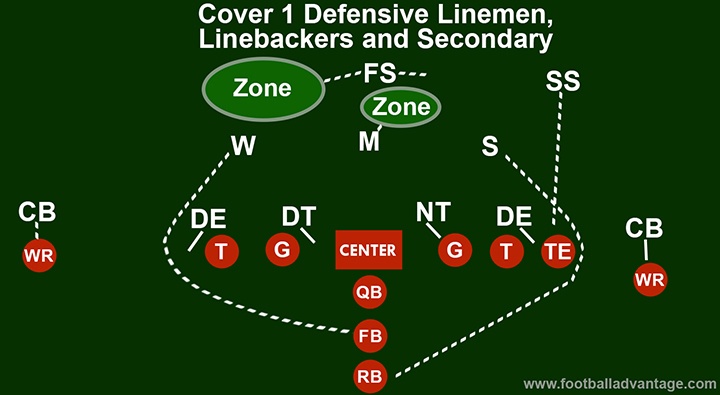 The secondary is made up of two cornerbacks and two safeties in a Cover 1 defense.

The alignment and objectives for the two cornerbacks is pretty simple…

On running plays, the cornerbacks’ job is to funnel the play to the inside of the field for tackling support.

On passing plays, they match up man-to-man with the wide receiver and follow him wherever he runs his route.

There is both a strong safety and a free safety on the field at all times in this defensive alignment.

The strong safety will line up over the tight end, at a depth somewhere between the linebackers and the free safety.

The strong safety could also approach the line of scrimmage if he expects the play to be a run, or if he is asked to blitz on that particular play.

Against the pass, the strong safety’s primary responsibility is to cover the tight end.

On paper, he has the best combination of makeup and skillset to do so, as the strong safety has the speed to keep up with a tight end and is also normally the biggest and strongest member of the secondary.

The free safety, meanwhile, will serve as over-the-top protection for the defense.

He will align himself in the middle of the field, back about five to seven yards behind where the Mike linebacker lines up.

The free safety usually will shade to one side of the field, most of the times against the opposing offenses most dangerous receiver.

On running plays, the free safety is asked to step up and fill against a ball carrier, making sure that no one gets behind him.

On passing plays, his role is similar…

To provide extra support to the cornerbacks and linebackers and ensuring that a receiver doesn’t get behind him, as he is literally the last line of defense.

Free safeties can also be asked to blitz at time in the Cover 1 defense, as they are the only position that doesn’t have a specific man-to-man responsibility against the pass.

A Cover 1 defense is an excellent defensive alignment to run, and just about every team should have some form of it in their playbook, no matter what level of football the team is.

That’s because the Cover 1 defense is the simplest and most straightforward defense that a team can run.

Contrary to that thinking, a coach can implement a lot of wrinkles to a Cover 1 defense to make it less predictable, to keep offenses guessing, and to hide where potential pressure is coming from.