The Ultimate Guide to 7 on 7 Football (Rules, Positions, and Plays) 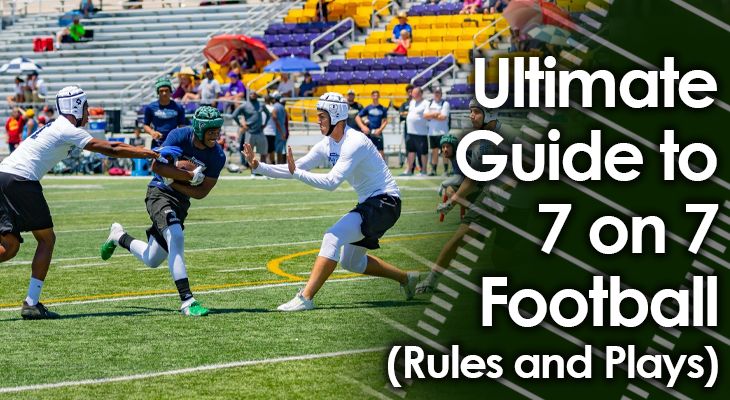 Football isn't always played with 11 players on offense and defense.

There are variations of the game that allows players to prioritize having fun and learning specific aspects and areas of the sport.

One of the most popular variations is the 7 on 7 football.

Below, I'll break down exactly what it is, the basic rules, some plays, and much more.

7 on 7 Football is a version of football that has 7 players each for offense and defense.

This variation has a strong emphasis on running routes and the passing game, and there isn't any tackling nor are there any pads.

Instead, it's similar to touch football where a player is considered "tackled" if a defender touches him below the neck.

Some versions even have players wear belts with "flags" on them, and a player is tackled when one of the flags or the belt is pulled off by a defender.

7 on 7 is one of the most exciting and fun variations on football.

It's a great way to teach players skills they can then use in a regular 11 on 11 game.

The game is particular popular for youth and high school players, while some universities even have 7 on 7 football leagues for people to have fun. 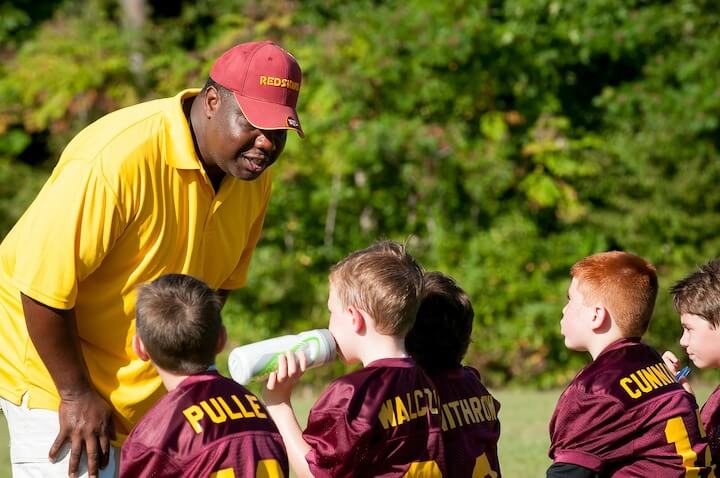 Players won't be blocking in the traditional sense, nor will there be any tackling. In fact, there are penalties called for any contact similar to that.

Because there is no contact, players will not wear traditional football pads or even helmets. They'll simply wear shorts or pants and a t-shirt, which will signify their team and number as well.

The game will have two halves that last 20 minutes each, with a short halftime between each half of play.

In this case, the only piece of "equipment" players will wear is a belt that wraps around their waist outside of their shorts.

There are then 2-3 flags that hang from the belt.

Players are considered tackled when a defender rips one of these flags off the belt, or rips the belt off completely.

In leagues where players don't wear a belt, tackles are made by simply touching the ball carrier anywhere below the neck.

All it takes is a simple touch. Players don't need push or shove people to the ground or out of bounds.

The way it's constructed allows for plays to be much more free-flowing.

Running in the traditional sense is not allowed as well; all plays must be forward passes of some sort.

The emphasis on a 7 on 7 football game is the passing game.

7 on 7 Football Rules on Timing

In 7 on 7 football, defenses are not allowed to rush the quarterback.

This may seem like an unfair advantage at first, since quarterbacks would be able to basically pick who they want to throw to.

But, taking a closer look shows us that's simply not the case.

The quarterback has four (4) seconds to release the football.

If he doesn't throw a pass within those four (4) seconds, the play will be called dead.

It will be much like a sack, where the next play starts at the point where the quarterback had the football as the time expired.

The offense will also lose a down.

The other major rule in regard to how plays work is that the quarterback is not allowed to rush with the football.

In other words, he must throw a pass on every play. He cannot just scramble beyond the line of scrimmage.

Rule on the Snapper

Finally, the person who snaps the football (more on that later) is NOT allowed to go out for a pass.

The playing field here will be a lot shorter than a traditional football field.

Instead of being 100 yards long, the 7 on 7 field is usually only around 40 yards long.

Unlike traditional football games, there are no kickoffs in 7 on 7 football.

Instead, the offense will start each possession from the 40-yard line.

They'll need to progress 40 yards, then, to score a touchdown.

At the beginning of each possession, the offense has three (3) downs.

If they are able to cross over the 25-yard line, they'll convert a first down.

The same is true when they then cross the 10-yard line.

Some formats, however, will award offenses with only one (1) extra down when they cross the 25- and 10-yard lines.

In many ways, scoring in a 7 on 7 football game is similar to that in traditional football.

There are, however, a few differences.

The goal here is for the offense to cross the opponent's end zone. When the offense successfully does this, it's considered a touchdown and will score six (6) points -- much like traditional football.

There isn't a kicking game in 7 on 7 football, though.

Instead of trying to kick an extra point, offenses will have an attempt to score one (1) additional point after a touchdown.

They'll line up at the 10-yard line and have one (1) play to cross the goal line to secure an extra point.

How the Defense Can Score:

Defenses can also get in on the point-scoring action in 7 on 7 football.

In most leagues, defenses score two (2) points each time they intercept a pass, (some leagues reward an interception with three points).

If the defense is able to turn the offense over on downs, they also score two (2) points.

In addition to these scores, their offense will also take over possession to try to score even more.

Because of these, playing good defense is just as vital in 7 on 7 football as playing offense. 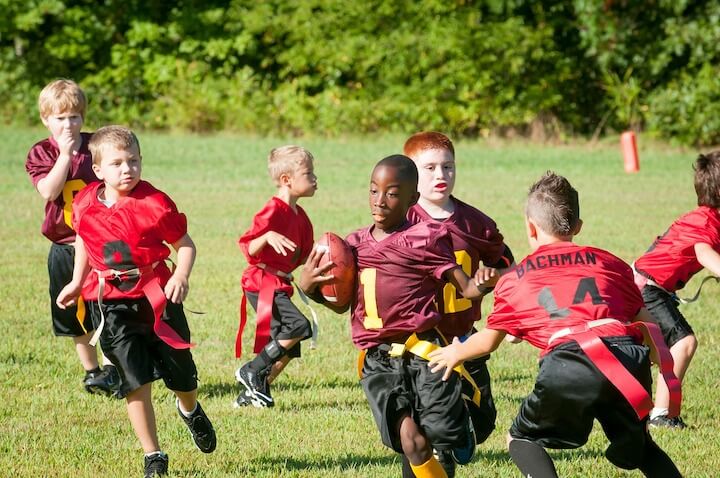 Despite the absence of blocking, tackling, or rushing the quarterback, there are still penalties in 7 on 7 football.

Most penalties here are pass interference or defensive holding calls, though there are also similar offensive penalties.

In some instances, referees may also call personal fouls or unsportsmanlike conduct.

In all cases, a penalty will result in either the offense losing a down or getting awarded an automatic first down.

All penalties will also be accompanied by either a gain or loss of five (5) yards, based on which team commits the penalty.

As the name of the game suggests, it involves seven (7) players on every play.

With four (4) less players on each team, there is much more room on the field for offenses to run.

The offense will consist of a quarterback, a player who serves as the center (or at least snaps the football) and five receivers.

The center will be ineligible to go out for a pass. That means there will be only 5 eligible receivers on any one play.

There will be no traditional offensive line positions, other than the player who acts like the center.

The defense will have 7 players to position however they want on the field.

Many will play either straight zone defensive coverage, or will run man-to-man coverage with 5 players, with the remaining 2 players acting as safeties in a zone coverage.

Offensive coaches can get really creative with play calling in 7 on 7.

This is really important, actually, as defenses will have an advantage when it comes to each play -- with 7 defenders covering 5 receivers.

As such, coaches need to come up with inventive play calling to confuse defenses and take advantage of the extra spacing on the field.

Here are a few 7 on 7 football plays you can use: 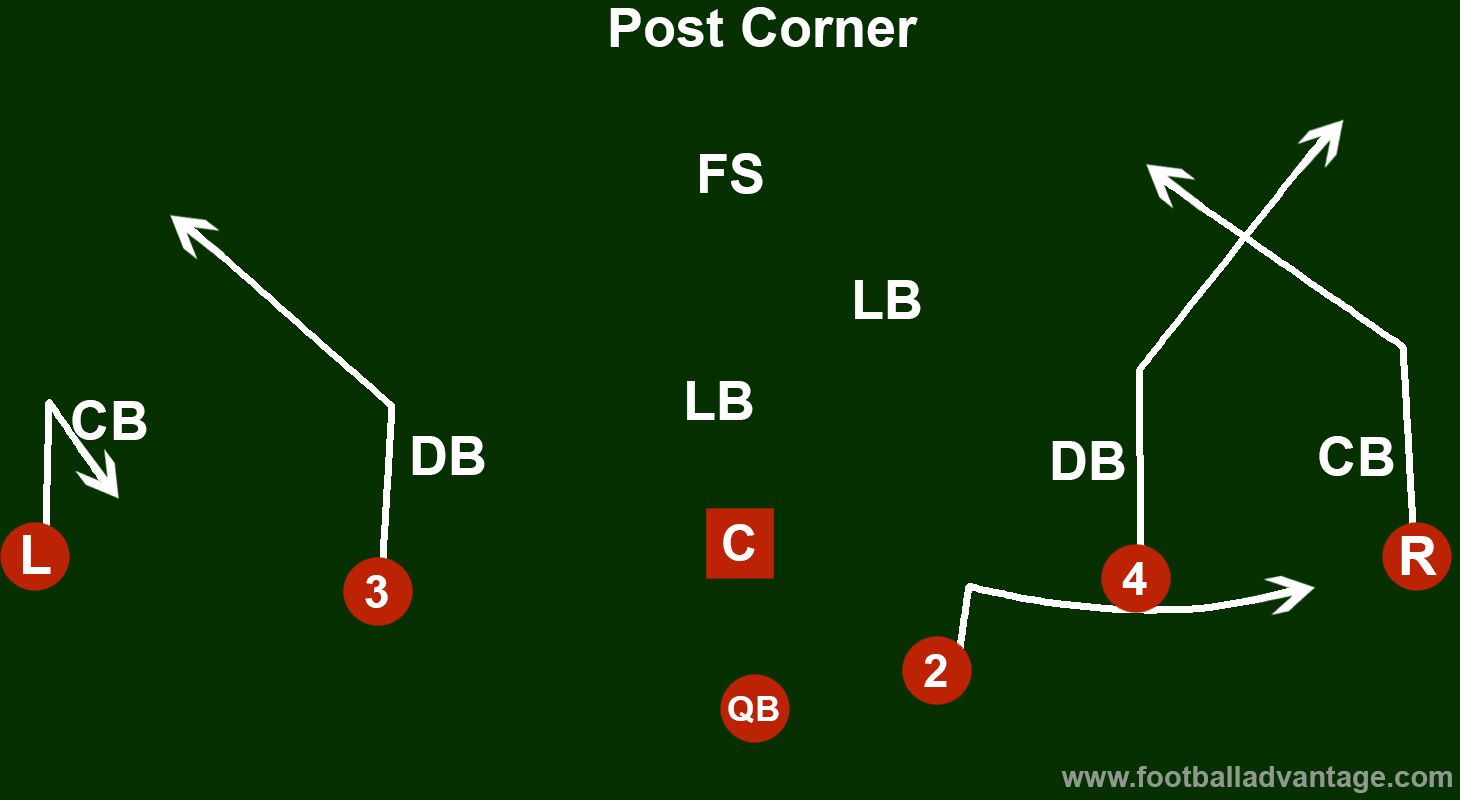 This play will have receivers cross each other's faces -- the idea here is to confuse defenders.

The offense will do this by having inside receivers end their routes outside, and the other way around for the outside receivers.

This play will work equally against either man-to-man or zone coverage, or a hybrid version. 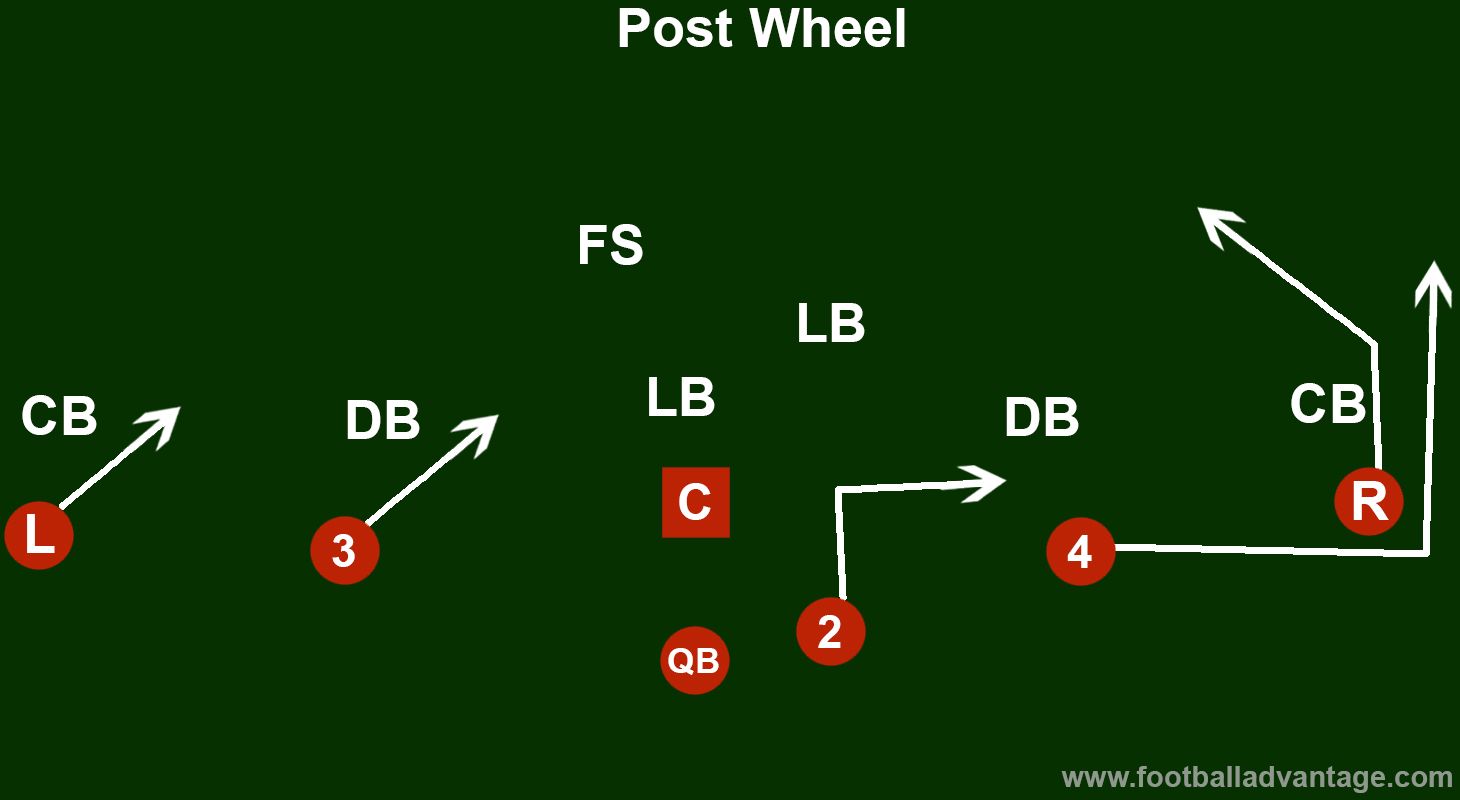 This play is also great against all coverages.

The idea here, again, is to cross the defenders face with multiple receivers, hoping to have one player get open downfield.

The primary targets on this play are the two receivers to the right. 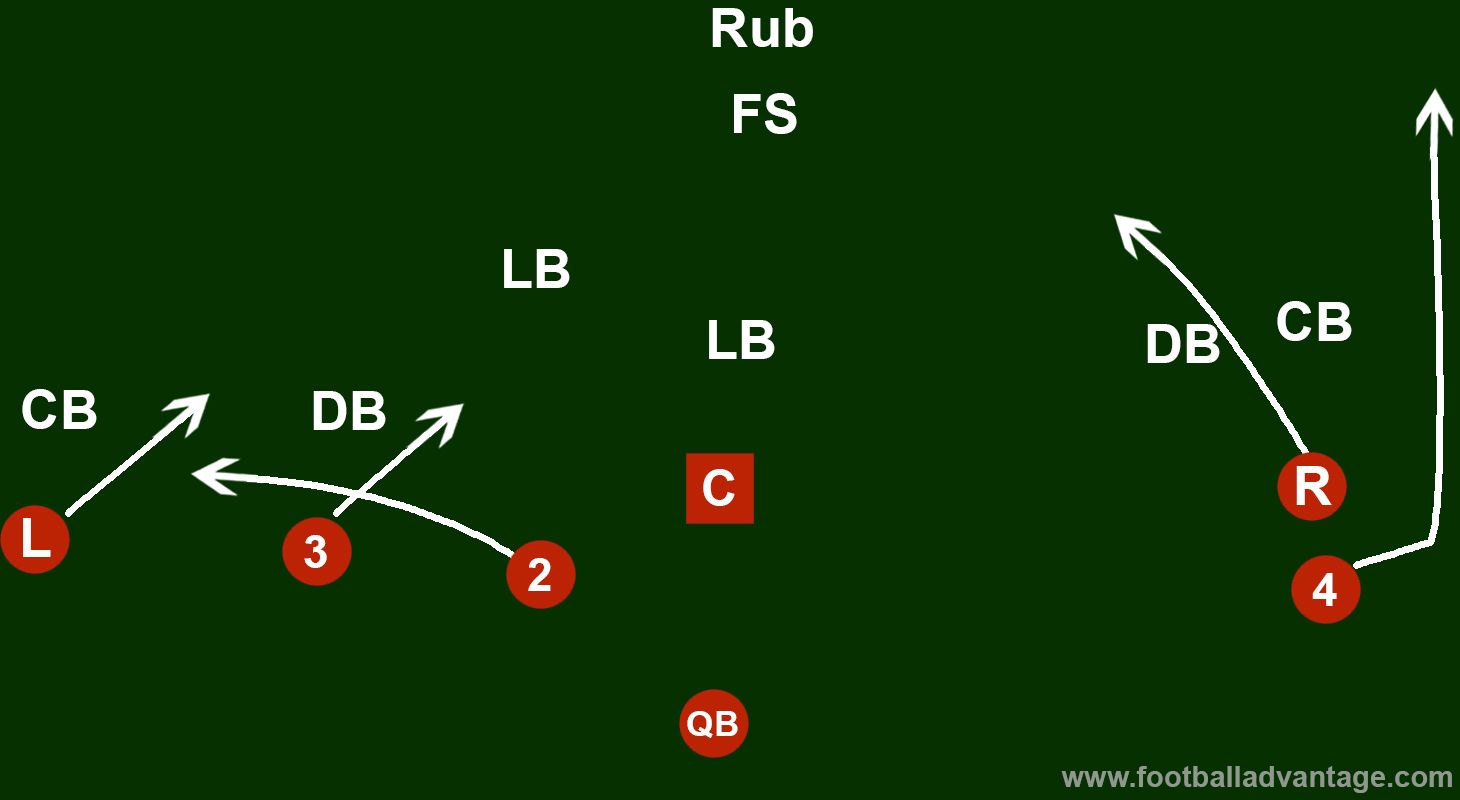 Some of the best plays in 7 on 7 football integrate confusion and what are known as "rubs."

They are basically pick plays designed to have defenders run into each other, thereby allowing receivers to get wide open.

7 on 7 football is a great game that can be a lot of fun while also teaching players some of the most important skills they need for a full game of football.

It's a fast-paced game with a lot of spacing that focuses on passing and catching.

This guide will help you understand how 7 on 7 football is played, as well as some offensive plays you can run to help your team be more successful on the field.