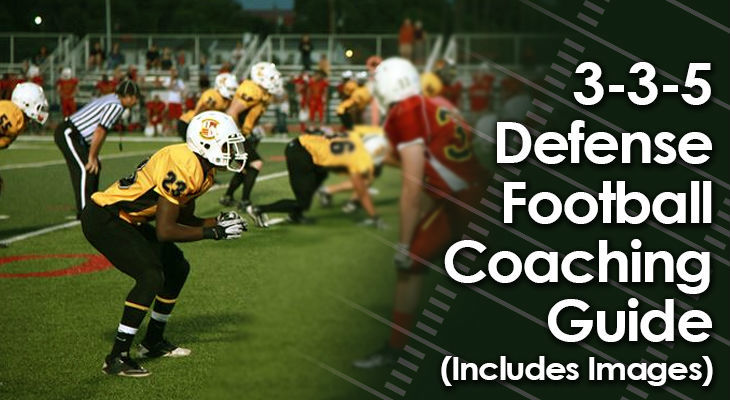 Defenses in football have recently progressed as offenses have changed.

With passing becoming more and more a focal point of the offensive game, and with more teams running normal offensive sets out of the shotgun formation, defensive alignments have begun to shift, too.

Now, though, the 3-3-5 defensive formation is becoming more common as defenses look to keep up with the changing approach of offenses in football. 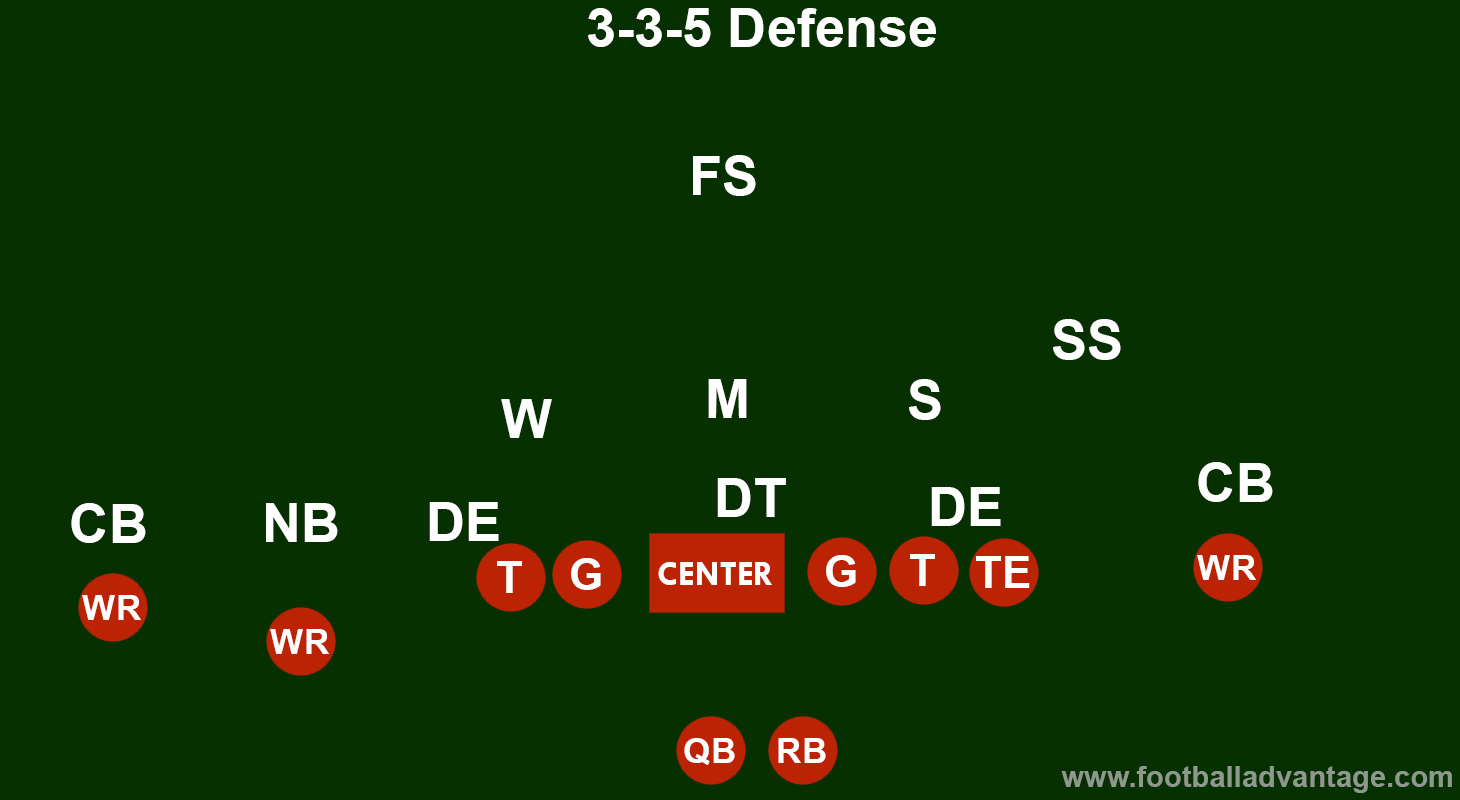 A 3-3-5 formation is great for defenses that have players with a nice combination of speed, power, and coverage abilities to keep up with an opposing offense that passes the ball a lot.

Especially with multiple wide receiver sets out of the shotgun formation.

The 3-3-5 defense is also great for a football team comprised of more skilled players in the secondary, rather than a team with a lot of big, beefy, powerful defensive lineman.

The formation utilizes only three down linemen and five defensive backs.

This is to emphasize players who are solid in pass coverage and players in the secondary who can approach the line of scrimmage, make tackles in space, and also contribute to stopping the run.

It’s essential that coaches who utilize this formation are able to effectively communicate each player’s defensive responsibility on the field as there are a lot more players running around in coverage with responsibilities outside of simple gap techniques at the line of scrimmage.

A 3-3-5 defensive formation is also great to use in specific situations against offensive teams that pass a lot and use a lot of multiple wide receiver formations, or in specific game situations such as third down and long to go to get a first down.

Strengths of the 3-3-5 Defense

Allows For a Faster Defense - Using more defensive backs than defensive linemen allows your defense to have more speed on the field to keep up with today’s faster game.

Creates Confusion - Offenses are not as familiar with the 3-3-5 defensive format, so quarterbacks and offensive linemen are tasked with identifying match-ups from a formation they’re not used to seeing.

Allows for Flexibility - Having only three down linemen and five defensive backs allows outside linebackers the freedom to blitz more often, or serve as another type of defensive lineman who doesn’t start the play in a three-point stance at the line of scrimmage.

Can be Used in Multiple Formats - A 3-3-5 defense is not only good for protecting against a passing offense. A good combination of personnel will be solid against the run game as well, allowing safeties to play near the line of scrimmage more in run support.

Clogs Up Space - Extra defensive backs and roaming linebackers clog up space in the middle of the field, where offenses today love to take advantage with shorter crossing routes for their receivers.

Weaknesses of the 3-3-5 Defense

Tough to Get at the Quarterback - Having only three down linemen frees up more offensive linemen at the snap of the ball to have vision downfield. This allows them to recognize and potentially pick up a blitz or a stunting defender before they have a chance to put pressure on the quarterback.

More Space for Offensive Linemen - A bigger, more athletic offensive line might be able to get off the line of scrimmage better as they’re not faced with an opposing down linemen opposite them at the start of the play.

Requires Speed - A slower, bigger defensive team might have trouble keeping up with speedier wide receivers, athletic tight ends, and running backs who are running routes.

Requires Athleticism - A 3-3-5 defense cannot succeed without bigger, more powerful defensive backs who are solid at tackling. Fewer down linemen means more ball handlers will need to be tackled by players in the secondary who often are the last line of defense between the ball carrier and the end zone. 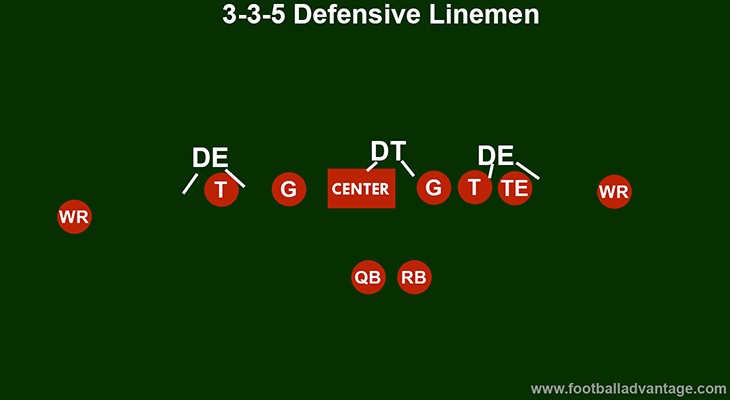 A 3-3-5 defense, like all other defensive formations in football, starts with the big guys up front, the defensive linemen at the line of scrimmage.

This formation utilizes one defensive tackle and two defensive ends.

One option up front is to have a traditional nose tackle line up directly over the center’s head, in what’s called the 0 technique.

The tackle’s head, in this case, will be lined up directly over the football.

Using the player as a nose tackle in this case, the player can also line up in a 1 technique on either side of the center between the two guards.

The tackle’s responsibility is to clog up one of the A gaps, depending on the specific play.

His main responsibility is to force the offensive line to double team him, clogging up both the center and a guard, which then frees up an inside linebacker to roam in the middle to stop the run or get to the quarterback.

Another option is to shade the defensive tackle into a more traditional role that he would take on in a 4-3-4 defense, where he is lined up over the guard’s inside shoulder.

This would allow for more stunts with defensive ends and blitzes by inside linebackers, but could also free up more space for offensive linemen if the tackle isn’t quick on his feet off the line of scrimmage with the snap of the ball.

The strong side defensive end would line up on the side of the field where the tight end is lined up, or the “strong” side of the offense.

This player’s responsibility is to keep containment of the play inside of him, as it always is with defensive ends, but then also to push the offensive line back as much as possible and force defenses into double teams.

This would allow for more blitzes and stunts from linebackers, safeties, and cornerbacks.

The weakside defensive lineman can either be a traditional down lineman who starts the play in a three-point stance, or it can actually be a fourth linebacker brought in on a specific play to cause more confusion.

This player’s responsibility would be outside containment as well as more stunts and pressures on the quarterback from the weak side.

This player is often freed up to be blocked by a running back in the backfield, so a player with speed and strength could thrive in this role. 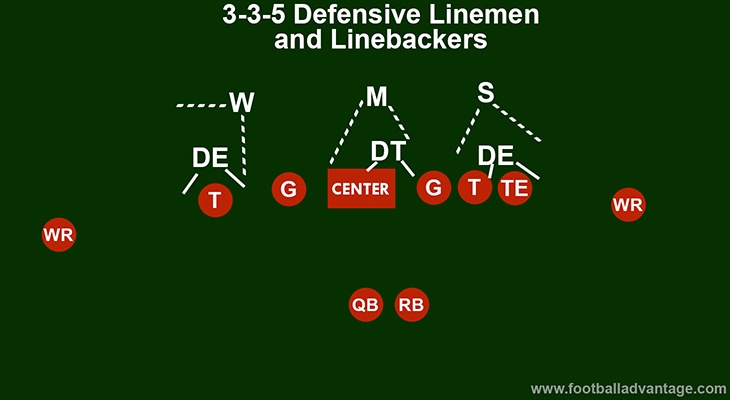 Let’s start with the middle linebacker, more commonly referred to as the Mike.

The Mike is the quarterback of the defense, responsible for recognizing the formation that an offense is in and calling it out to the rest of the defense, as well as making sure all the defensive players are lined up in their appropriate positions.

The Mike linebacker in this formation should typically line up about five to seven yards off the line of scrimmage.

This gives him more time to read and react to the offense, and also gives him more space to go out in pass coverage or to plug up holes against the run.

They can also become a blitzer, since there is a lot of other support in the passing game with the extra defensive back.

The strongside linebacker, or the Sam, is who lines up on the strong side of the defense, toward the tight end.

The Sam linebacker has three primary duties in a 3-3-5 defense.

The first is to be the primary blitzing player on your defense.

He should often be used to blitz inside in the gap that the nose tackle is clogging up, or on the outside to a gap that your strongside defensive end is handling.

A second possible responsibility on pass plays for the Sam linebacker is to cover the tight end when he runs a route.

On running plays, it is the Sam’s responsibility to plug holes both inside and outside the tight end.

The final linebacker spot is called the Will, or the weakside linebacker.

This position in a 3-3-5 defense is sort of a hybrid position.

This player will blitz a lot, both against the pass and the run, and can be used as a fourth defensive linemen at times to cause confusion at the line of scrimmage.

This position will sometimes drop in pass coverage as well, and could even act as the Mike linebacker on plays where the Mike is the player who is blitzing. 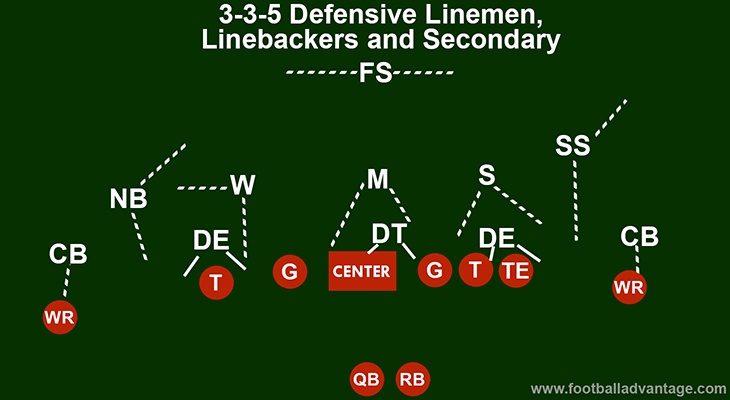 One of the most important attributes of all secondary positions in this formation is speed, since they’ll be running all over the field against potentially more receiving options and plugging up what could be extra holes created by having one fewer down defensive lineman.

First, let’s talk about the safeties.

Both the free safety and strong safety have similar assignments to when a defense is lined up in other traditional formations that have only four defensive backs.

The two cornerbacks are tasked with similar responsibilities to what they’re used to in other defensive formations as well.

In a 3-3-5 defense, it is essential that the cornerbacks keep containment and not get beat over the top by a receiver.

There isn’t as much freedom for a cornerback to lose that containment, since there might not be a safety behind them for support on a deep passing play.

Perhaps the key to the entire 3-3-5 defense, though, is the nickelback position.

The nickelback will often be tasked with covering a receiver who lines up in the slot.

In addition, he may be asked to blitz at times, and be one of the first members of the secondary to support against the running game, especially on run plays that go to the outside of the tackles and tight ends.

Offenses will oftentimes key in on the nickelback and try to throw his way, since they think he is the fifth most talented player in the secondary, otherwise he would be a starting cornerback or starting safety.

That’s why it’s essential that a nickelback in a 3-3-5 defense keep contain, and to do so, he must be very quick and be able to read defenses to run in space and make adjustments on the fly based off what offense is being run.

The 3-3-5 defense is a great option for coaches to run in today’s game of football.

It allows for great flexibility to defend against both the pass and the run, especially when more and more offenses are running more multiple wide receiver sets and out of more shotgun formations.

Perhaps the best thing about a 3-3-5 defense is its ability to cause confusion to opposing offenses.

Nearly every position at the second level (the linebackers) and the third level (the secondary) of the defense can be a potential blitzer, which means that pressure from a 3-3-5 defense can come from anywhere at any time.

However, in order to effectively run a 3-3-5 defense, a coach must first know whether he has the defensive personnel capable of the task.

Almost all players on the defense in a 3-3-5 formation must possess speed and quickness, along with strength up front and vision and adjustment ability in the linebackers and secondary.

The secondary must also have players capable of keeping contain and covering receivers one-on-one without extra support over the top at times as safeties and linebackers blitz.

Overall, if a coach has the right personnel that can understand and run the formation, a 3-3-5 defense is a great option for keeping opposing offenses on their toes.

It’s also a great way to teach players a different approach to defense and give them multiple tools they need to read offenses and react by either dropping into coverage against the pass, or blitzing and filling gaps against both the pass and the run.

Great info! We are installing this defense for our team! Players love it!

We have been using the 3-3-5 for the past 3 years and it is extremely effective.

Love this and would love any help on secondary coaching and techniques in the 3-3-5 defense.