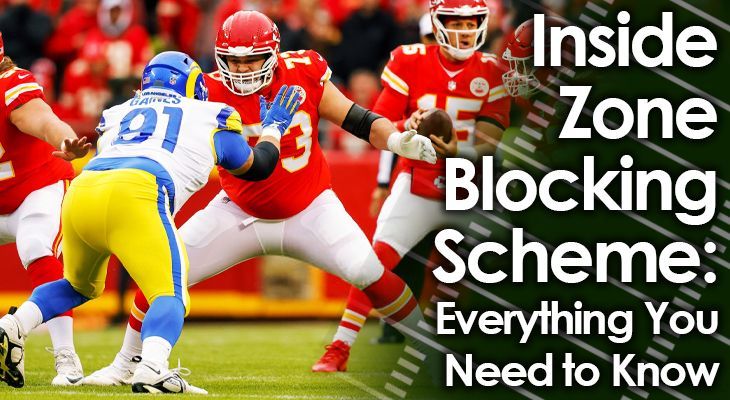 Inside zone blocking is perhaps the most commonly-used blocking scheme in all of football today.

There's a very simple reason for that -- it works.

That's obviously a very simplistic explanation of why the inside zone blocking scheme is so popular.

At its core, the scheme does two things.

First, it simplifies blocking assignments for offensive linemen, which makes it easy to teach and apply in multiple iterations.

Second, it takes advantage of the numbers game to put more offensive bodies on defensive bodies, which opens up holes along the line for running backs.

While the inside zone blocking scheme is easy to teach, there are some basic principles you have to focus on if you want your players to learn.

Below, we'll dive into those principles as well as how to run the inside zone blocking scheme effectively.

The inside zone blocking scheme makes it easier for offensive linemen to pick up blocks and identify their assignment at all times -- no matter how the defense lines up.

That's because offensive linemen only have to block players they see in a certain area -- rather than trying to pick up a specific player.

The basic idea of the inside zone scheme is that players will take their first step toward the same side of the field where the run play is going, and they'll do so at a 45-degree angle

This means that if the offense is going to the right, their first step will be to the right and vice versa.

Each offensive lineman is responsible for covering the gap to the same side of the field as where the run is going.

For example, if the play will go to the right, the center will have to cover the A Gap to the right. 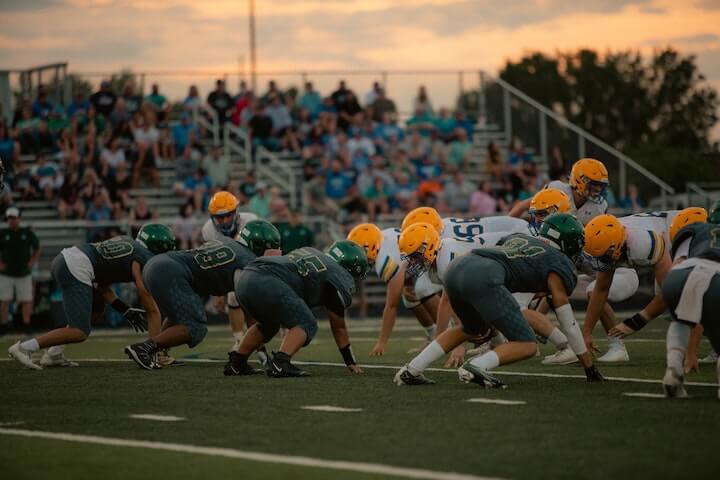 How Linemen Determine Who to Block

The inside zone blocking scheme makes it very easy for offensive linemen to understand WHO to block on each play.

We know already that each lineman is responsible for the gap to his immediate right or left, depending on which play is being run...

But, WHO does he pick up exactly?

At the most basic level of this scheme:

Each offensive lineman will block any defensive player lined up at the line of scrimmage in his gap.

For example, if a nose tackle lines up over the right shoulder of the center and the play is going to the right, the center will be responsible for blocking that nose tackle, since he's in the right A Gap.

If the gap isn't covered by a defender at the line of scrimmage, the lineman is responsible for getting upfield to block the linebacker in that area -- since he's likely the defender responsible for that gap.

Let's assume the play goes to the right.

The left guard will be responsible for the left A Gap on this play.

This leaves the left A Gap open.

The left guard's job is to explode out of his stance and pick up the linebacker aligned over this gap toward the middle of the field.

This, however, is only a basic explanation of inside zone blocking and doesn't really take advantage of all the benefits of the scheme.

Double Teams When Inside Zone Blocking

Once players master the basic form, coaches add in the one major wrinkle that makes the inside zone blocking so effective:

The principles are exactly the same here in terms of which gaps to cover, how they determine these, and who they'll block.

The difference is what the "uncovered" offensive linemen do.

Let's go back to the example above.

The left guard in that case would be uncovered, since there is no one directly opposite him or covering up the gap he's responsible for (in this case, the left A Gap).

Instead of exploding out of his stance and picking up the linebacker, he will help the left offensive tackle by double-teaming the defensive tackle.

He'll do this by taking his first step to his left -- away from the play side.

His first move will be to go that way and deliver a hefty blow to the defensive tackle, which will knock the defender off balance and give the offensive tackle some extra leverage to finish the block.

After delivering the initial blow, the left guard will peel off and head upfield to pick up the same middle linebacker he was initially responsible for.

Now the power of the inside zone blocking scheme really comes into play.

Basically, any *covered* offensive lineman will take their first step to the play side and immediately pick up the defender in the gap they're responsible for.

All *uncovered* offensive linemen will take their first step away from the play side, "chip" on the nearest down defensive lineman to help double team, then peel off to get to the second level and pick up a linebacker.

A lot of football teams at different levels use the inside zone blocking scheme simply because it's very effective.

It's an easy blocking scheme to teach players, and there are many different wrinkles coaches can install to create a successful running game.