5 Defensive Line Drills to Get More Sacks and Tackles 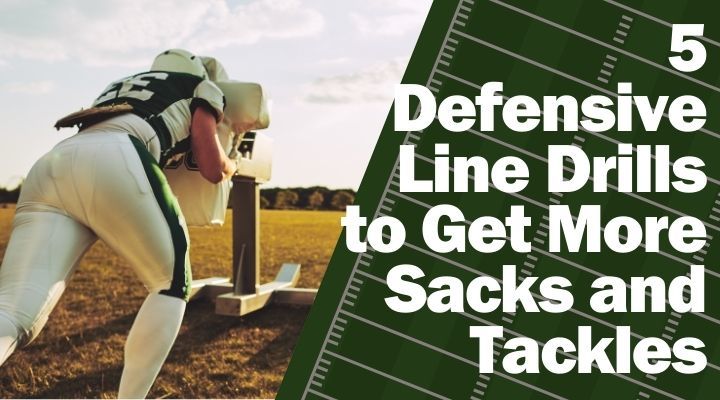 Defensive line is a difficult position to play in football.

Every day, nose tackles, defensive tackles, and defensive ends are tasked with causing disruption along the line of scrimmage, gobbling up big offensive linemen to free up other tacklers, stopping running backs from big gains, and sacking the quarterback.

It's a very demanding job.

Defensive linemen need to have a high motor, great footwork, exceptional strength, and even better moves to get their job done.

They also must be able to enforce their will physically on big offensive linemen.

Defensive linemen are constantly involved in high-contact situations. They make physical contact with at least one offensive lineman on every single play.

When they stop a running back, they’re absorbing the force that comes with a player running at full speed.

Even when they can get to the quarterback for a sack, they’ll be constantly battered by offensive linemen who are trying to prevent them from doing so.

While defensive linemen will use brute force to bull-rush offensive linemen on some plays, to be really great at the position, they need to learn other skills.

They can pick these skills up, as well as the knowledge on how to play the position, by being put through defensive line drills that’ll help them get better.

Here are 5 defensive line drills to help players get more sacks and tackles. Once an offensive lineman places his hands on the defensive lineman's body, then he’ll be able to establish leverage and move him in whatever direction he wants to more easily.

This drill, which is sometimes even called the karate drill, will help reinforce the importance of preventing offensive linemen from getting their hands to their body.

The best way to prevent this from happening is for the defensive lineman to use their hands to fight them away.

To run this drill, a defensive lineman will line up directly opposite of a player who will represent an offensive lineman. They’ll stand roughly arm's length apart from each other.

The offensive player will try repeatedly to strike the chest of the defender with his hands.

It's the defensive player's job to knock the opponent's hands away from his body by using his own hands.

Both players should keep their feet planted during the entire drill. This will force them to remain focused on using just their hands as the weapon to keep their body free.

For more advanced players, the coach can have the defensive player use moves such as rips or arm-overs while they’re beating the offensive player's hands away.

This is a drill that should be consistently worked in during practices. Defensive linemen have to constantly deal with blocks as they make their way to ball carriers.

They’ll often have two levels of blockers to deal with -- one that lines up directly opposite them.

The second-level blocker could be a fullback bursting through the line of scrimmage or another offensive lineman who comes over to help.

The first-level blocker will line up on a slight diagonal to him in a three-point stance.

Finally, the third-level player (the ball carrier) will line up on the same diagonal behind the second-level.

The first-level blocker will try to block the defensive lineman low.

The defender's job is to take on and shed that block, then get to his left.

He'll then be met by the second-level blocker, who will block him high, trying to push the defender to his right, away from the ball carrier.

The defender must shed this block from the second-level blocker, then shift to his left to get to the ball carrier.

This drill will teach a defensive lineman how to engage and then quickly shed blocks of different kinds in quick succession. It'll also help him work on his lateral movement, and keeping his balance the entire way through a play.

While this drill may seem rather quick and intense, it's what a defender will experience on a lot of plays.

Alterations to this drill can be made by having the play go to the right instead of the left.

You can also have the second-level defender line up at the line of scrimmage, which would force the defensive lineman to shed a double-team block before getting to the ball carrier.

This defensive line drill is very similar in concept to an offensive lineman drill that’s called "Set and Punch."

Just like it is for offensive linemen, delivering the first contact and taking control of the body is crucial for defensive linemen as well.

If defensive linemen can deal an effective first blow, then they'll be able to knock the offensive lineman off-balance, thereby gaining leverage on the block and giving him a better chance of shedding the block and getting into the backfield.

The offensive lineman will be trying to do the same thing as the defensive lineman. He'll be looking to deal the first blow. The difference between the two positions is what comes next.

Offensive linemen will attempt to engage with the defender so he can block him.

Defensive linemen, meanwhile, will attempt to get by the offensive lineman so he can get to the quarterback or ball carrier.

The first half of this drill will be the same as the offensive line "Set and Punch" drill.

A coach or teammate will line up across from the defensive lineman with a bag.

The defender will start in a three-point stance, and the coach will line up over either his left or right shoulder.

At the start of the drill, the coach will move toward the defender with the bag extended out.

The defender's job is to make first contact with the bag by dealing a powerful punch. The defender will also need to kick out with his foot toward the shoulder where the coach has lined up.

The defender should aim to deliver his punch to the middle of the bag by using the palm of his hand.

The lineman's elbows should be kept tight, while his thumbs need to be pointed up.

The bag will act as the chest of the offensive lineman.

If he's able to deliver this blow successfully in a game, he’ll knock the offensive lineman off his blocking course.

After delivering the punch, the defender must then evade the rest of the block and get behind the coach.

The simple way to do this is to step with the opposite foot beyond the coach while fighting off the bag with his hands.

The easy adjustment to this drill is to have the coach line up on the opposite shoulder than he did originally.

This will help the defender master the punch using both of his hands.

Another adjustment is to have the defender use a spin move or a rip move after the punch to get by the coach. This is a great drill for teaching defensive linemen how to overcome a lot of obstacles en route to recording a sack.

This drill will help them improve their overall fundamentals, their footwork, their tackling, and their instincts for getting the football.

For this drill, you’ll need three bags, three cones, and a stand-up dummy.

The bags should be placed about two to three yards apart. Five yards beyond the last bag, you'll put the cones in a triangle shape, with each cone about five yards apart from each other.

Finally, the stand-up dummy should be placed roughly five to seven yards beyond the last cone.

The drill will start with the defensive lineman in a three-point stance opposite the first bag.

The coach should use a football to trigger the start of the drill. This will help the defensive lineman recognize the snap as the starting point of a play.

Once the drill starts, the lineman must get over the three bags by keeping his knees high but his body low.

He'll then explode in a sprint after the last bag, and make his way around all three cones.

Finally, he'll explode toward the stand-up dummy and complete his tackle.

In the process, he should rip down with his hands as if he were attempting to knock a football loose from the quarterback.

The great part about this drill is the coach can set up the obstacles any way he wants to.

He can start with cones and then go to the bags.

He can force the defenders to shuffle around the bags instead of hopping over them.

The final part of the drill should always be the tackle and strip of the stand-up dummy. This drill will reinforce some of the same principles as the sack drill above.

To run it, you'll need three bags, one cone, a stand-up dummy, and a coach who will hold a football.

The three bags should be set up roughly two to three yards apart from each other.

The second bag should be staggered slightly to the right of the first and third bags.

Then, set up the cone about two to three yards beyond the last bag, and also off to the right.

The stand-up dummy should be set up about two to three yards beyond the cone, but in a straight line to where the defensive lineman will start the drill.

A coach with the football should position himself about a yard back and to the right of the stand-up dummy.

The defensive lineman should start the drill in a four-point stance, with both hands on the ground.

When the drill starts, he'll make his way around the bags by bear crawling.

Once he gets beyond the last bag, he'll start running around the cone. He'll then head to the stand-up dummy and perform a tackle on it.

As the defender is tackling the dummy, the coach should throw the football on the ground to either direction. This will simulate a fumble.

The defensive lineman will then need to scramble over to the ball and scoop it up to secure the fumble recovery.

This is a little more advanced drill.

So, for new players who are doing this for the first time, have them start at a slower speed before working their way up to full speed.

Not only must players have good speed, footwork, and strength, they also must take on shed blocks from big offensive linemen.

Defensive linemen also must face constant contact from a variety of players that come from all angles, as they look to break free and get to a ball carrier or a quarterback.

The five defensive line drills listed above will go a long way in teaching defensive linemen the basic skills that they'll need to acquire to consistently shed blocks to record more tackles and sacks.