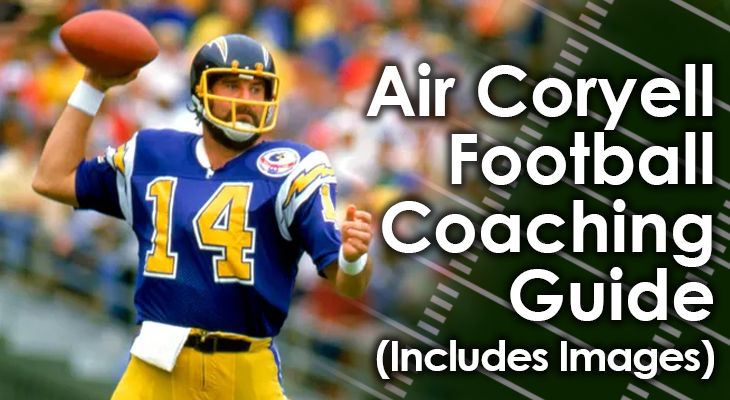 Throughout the years, there have been many variations to offenses as teams adjust to all the new ways defenses approach the game.

As the game of football has evolved, there have been many different offensive philosophies -- but only a few have been truly ahead of their time.

One of those is now known as the Air Coryell offense.

Let's take a closer look at how the Air Coryell offense works, its principles and philosophy, as well as some example plays that you could emulate for your team.

Origins of the Air Coryell

The pioneer of the offense was Don Coryell, who had lots of success coaching in both the NFL and college football.

In fact, he's the only coach to win at least 100 games at both levels of football.

While serving as the coach of the San Diego Chargers in the NFL in the late 1970s through mid-1980s, Coryell created a new offense that would eventually be dubbed the Air Coryell.

It is, in fact, the first true vertical passing offense created in football. The offensive philosophy was to spread out the field and stretch defenders to create mismatches.

At this point in the NFL, most offenses focused on the running game, and big sets.

The Air Coryell offense took a different approach -- and it worked.

A few highlights below...

At the time that Coryell first came to the NFL in 1974, most offenses in the professional league were running pro set offenses.

That included two running backs in the backfield, a quarterback under center and at least one tight end on the field.

Out of this offensive set, teams would mostly run the ball. And when they did pass, they were usually shorter passes that were just meant to move the ball downfield slowly.

Coryell flipped that on its head when he entered the NFL.

Bringing in some concepts from his successful days in college football, Coryell created a passing-based offense that would eventually be the basis for many modern offenses today.

At first, Coryell's offenses were pass-first to open up the running game, but were still run out of a pro set formation. That changed when he got to the Chargers.

The offense was built around an offense that Sid Gillman had created which forced defenses to cover the entire field -- rather than being able to stack the middle.

The Air Coryell took a much different approach to most formations.

On most plays, the quarterback would be under center but with only a single running back in the backfield.

The offense would make use of one tight end and three wide receivers.

While this formation doesn't seem out of the ordinary in today's game, it was VERY unique at that time. Back then, tight ends were mostly used as blockers.

But in the Air Coryell, tight ends would also run routes and catch a lot of passes.

The most famous of all tight ends on Coryell's teams was Kellen Winslow, who later on became an NFL Hall of Famer.

By spreading the field out with three wide receivers, the Air Coryell forced defenses to either cover one of the receivers with a linebacker or bring in an additional cornerback.

And while having a strong nickelback who plays a lot is common in today's game, it wasn't at all common then.

This is one way the Air Coryell offense created significant mismatches.

The third wide receiver was often either matched up with a slower linebacker or a third cornerback who didn’t really have the skills to play on every down. 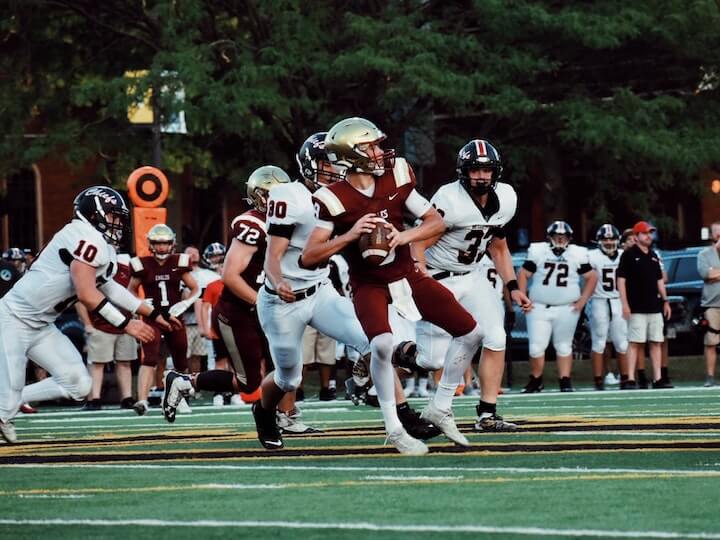 One of the key features of the Air Coryell offense was the pre-snap motion.

Wide receivers went in motion quite often, and running backs did too.

Coryell believed that the pre-snap motion would cause a lot of confusion on the defense, because it would force players to change their assignments and move all around the field.

And he was right.

Pre-snap motion like this was very unfamiliar to defenses, and it showed when the Air Coryell attacked them. Many defenders looked out of position and lost, while the offense knew exactly what it was doing.

The pre-snap motion served another purpose, too:

It allowed the quarterback to identify whether the defense was running man-to-man or zone coverage.

When a wide receiver went in motion, for example, and the player lined up opposite him followed him, it signified the defense was playing man-to-man.

If he stayed on his side of the field but backed up, the defense was likely playing zone coverage.

Having this information in mind was key for the quarterback, as it helped him identify potential holes in the defense based on the routes that were being run.

Pre-snap motion like this was very unfamiliar to defenses, and it showed when the Air Coryell attacked them.

Many defenders looked out of position and lost, while the offense knew exactly what it was doing. 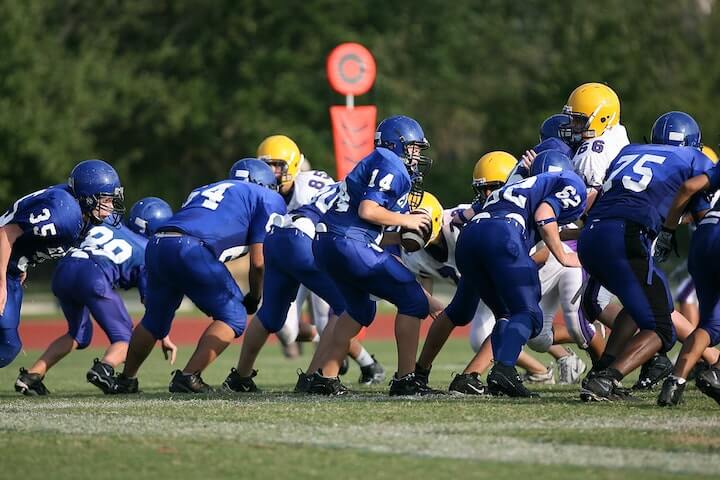 Another essential feature of the Air Coryell offense was timing.

Quarterbacks and receivers had to be in full sync for this offense to perform at its optimal level.

This was very important, as this offense would call for the quarterback to throw to a specific spot on the field -- rather than directly to a receiver.

By leading the receiver to the open spot, it allowed receivers to get more open than they would on their own.

For this to be successful, though, receivers had to know this was coming and they needed to have the ability to adjust their routes while running.

Now that you understand the basics of the Air Coryell offense, let's take a closer look at how it all comes together with some example plays.

These plays will show you just how the different elements of the offensive system are put into practice on the field during a game situation. 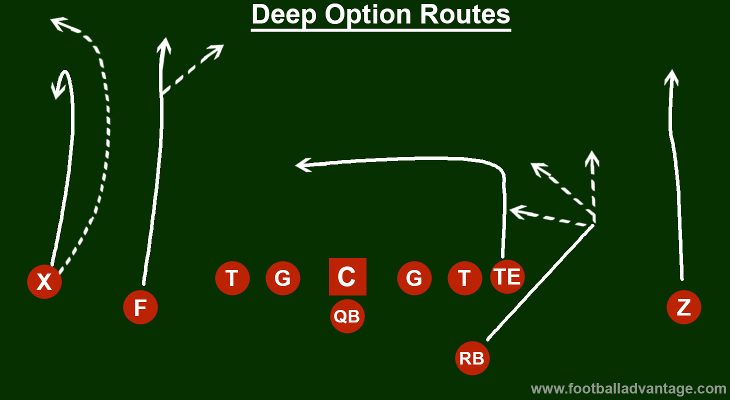 On this play three out of the four receivers will run what's called an Option route.

Basically, this means that the receiver will have the option to end their routes in different ways, based on what the defense is showing them.

The running back will be off-set to the right as well, almost directly behind the right offensive tackle.

The X receiver will be split wide left, with the F (flanker) slightly off the line of scrimmage to the left.

At the snap, the Z will run a straight Go route down the field.

The tight end will run an In route about 7 yards downfield. He'll look back toward the quarterback the entire time to see if he's the target.

The running back will take a straight 45-degree angle about 5 yards beyond the line of scrimmage. Then, he can finish his route three different ways -- either straight downfield or at two different sharper angles toward the inside.

The F will run a Seam route. If the defense is covering the middle of the field, he'll keep running straight downfield -- if the middle is open, he'll curve back into the middle.

The X will run a Deep Curl route, about 18 yards beyond the line of scrimmage.

He also has the option, though, to run a Fade route toward the left sideline if the defense gives him the outside. 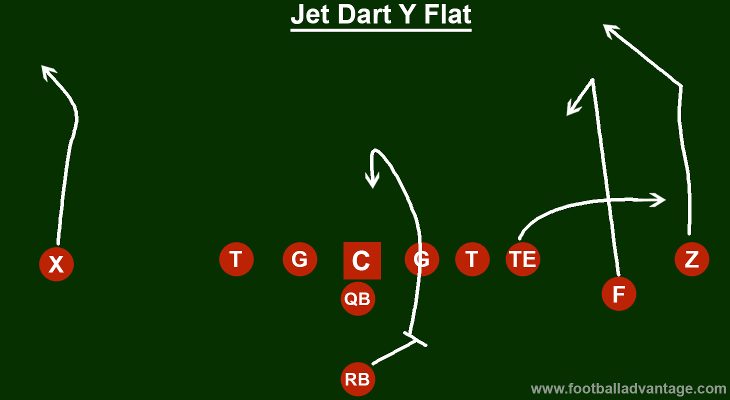 On this play, the running back will run an Option route, but all other eligible receivers will run defined routes.

Again, the offense revolves around timing and spacing, so the receivers will need to adjust if the quarterback leads them slightly away from where they were originally going to end up.

The great part about this play is that it will attack the defense on five different levels.

In other words, each of the five eligible receivers will run their route at a different depth, which takes away the possibility of the defense being able to double up any individual receiver. This creates a lot of advantageous matchups for the offense.

This play will flip the Flanker to the right side of the field, and the running back will line up directly behind the quarterback this time.

At the snap, the running back will dart out to the right and first look to block if a defender sneaks around the outside edge. He will stay into block if he's needed. If not, he'll run a quick Curl at a depth of about 4 yards.

The reason the running back may need to block is the tight end will release off the line right after the snap. He'll run a Flat route to the right, at a depth of about 5 yards.

Also on the right side of the field, the Flanker will run a Deep Hitch route, at a depth of about 12 yards.

The Z will run a Deep Slant. He'll start the slant portion of the route at a depth of about 12-15 yards.

The X on the left side of the filed will run a Fade route down the left sideline. He'll start fading to the outside at a depth of about 12 yards. 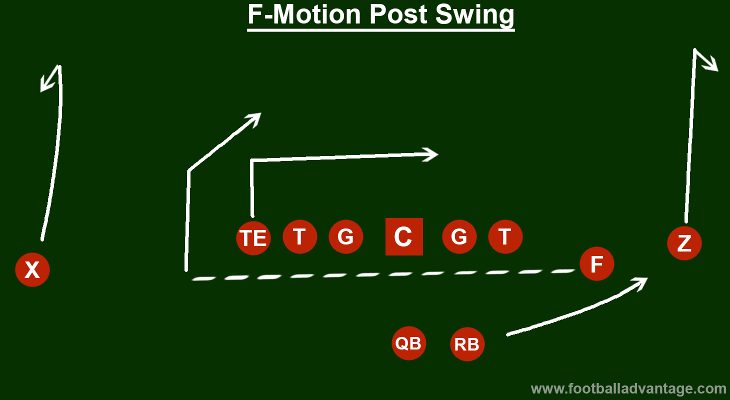 The Post Swing is one of the most common plays run out of the Air Coryell.

The attack will mirror itself on the outside.

The goal is to draw the outside defenders to the sideline, leaving the middle open for other receivers -- namely, the Flanker, who will be going in motion pre-snap.

On this play, the Flanker will start lined up on the right side of the field along with the Z split out wide right.

The quarterback can start either under center, but in most cases, he'll be in shotgun.

Before the snap, the Flanker will go in motion to the left side of the field, where there will now be three eligible receivers (Flanker, X and tight end).

At the snap, the two outside receivers will each run Comeback routes at about 15 yards.

The running back will run a Flat route that he'll take a direct 45-degree angle with.

The Flanker will run a Quick Slant route. He's the primary target here, as he could have a huge gainer if he faces one-on-one coverage -- assuming both safeties stay to the outside to help on the deep Hitch routes.

The tight end, meanwhile, will run a Quick In route, at a depth of about 5-6 yards.

Again, this play is very successful because it attacks the defense at multiple depths.

It also likely will draw safeties to the outside and free up plenty of space over the middle.

The Air Coryell offense was one of the most innovative approaches in the NFL at the time it was invented in the late 1970s.

Today, many of the top teams base their offenses on principles that it set.

While you may not want to run the Air Coryell offense exactly as the San Diego Chargers once ran it, there are plenty of great tips and principles you can tweak for your team.

It's a great way to attack the entire field and force the defense to cover all areas.