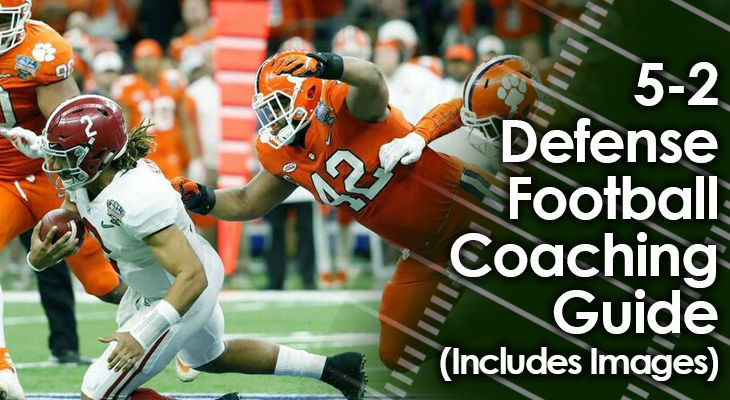 In obvious running situations for the offense - when the down and distance is third-and-one let’s say - defenses often adjust by going to what’s called a “big” or “stack” formation.

This brings extra bodies near the line of scrimmage to stop the run.

One of the most popular defensive formations to do this out of is the 5-2.

In its base form, it deploys five down defensive linemen and only two linebackers.

But smart coaches nowadays are adding a few wrinkles and using the 5-2 defense on more plays than previous coaches ever did.

But rather the 5-2 can be deployed in so many different forms that it can create plenty of confusion and pressure up front without sacrificing too much at the second level of defense.

The 5-2 defense in its base form is still very popular at the youth levels of football, where most offenses run the ball at a much higher frequency than they pass.

The 5-2 allows defenses to stack the line of scrimmage and protect against the run by putting another defender directly across from the offensive line.

But it’s also good against the pass and can be used in various forms to adjust based on the team’s skill level.

Who Should Use the 5-2 Defense? 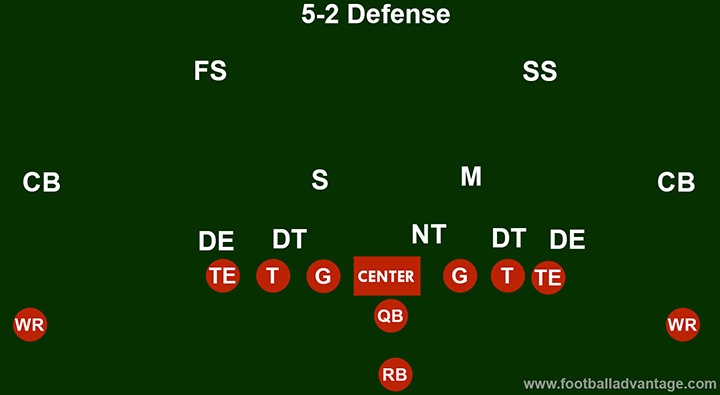 ​A 5-2 defense is a great formation to teach players who are new to the game of football because it is a simple defense to deploy.

It’s also tailored to stop the running game, which makes up the majority of offensive plays in youth football as compared to the pass.

This fact doesn’t make the 5-2 defense one that shouldn’t be run at other levels of football, though…

It can be used in different iterations and formats at the high school, collegiate, and professional levels as well.

Simply make a tweak here and there to personnel and how they line up before the snap of the ball, and you’ll have yourself a form of the 5-2 defense that will work for you.

It’s a great defense to use no matter whether your team is loaded with big guys up front or is smaller in size and therefore needs to have more bodies help clog up the offensive linemen.

​Easy to Learn - The base 5-2 defense is one of the easiest defenses to learn. That’s because the five down defensive linemen are responsible for five of the six gaps along the line of scrimmage, leaving only one other gap to be filled by a linebacker. The other linebacker and secondary are free to roam the rest of the field.

It’s Great Against the Run - Having so many players at the line of scrimmage makes it difficult for the offensive linemen to open up holes for running backs to carry the ball. This could force them to the outside, where free linebackers, cornerbacks, and safeties will be waiting to make a tackle.

Also Good Against the Pass - The extra defensive linemen in a 5-2 alignment doesn’t sacrifice a player from the secondary. That means there are four good defenders on the field to protect against the pass, with two more linebackers still available to help out as well.

Plenty of Pressure - The extra push at the line of scrimmage makes it easy for defenses to bring pressure from just about anywhere on any play. Linebackers, cornerbacks, and safeties can all blitz, and it’s hard for offensive linemen to pick up the blitz because they’re tied up with defensive linemen.

​Susceptible Against the Spread - Offenses can counteract the extra pressure up front by spreading the field. Putting more wide receivers on the field and running out of a shotgun formation could create a lot of mismatches for speedy wide receivers and running backs.

Easy for Linemen to See Responsibilities - There isn’t a lot of guessing for an offensive linemen against a 5-2 defense. Their blocking responsibilities are most often lined up directly opposite them. So on plays in which the defense doesn’t blitz, a good offensive line might have no problem picking up their assignments.

Space in the Middle - The extra defensive linemen is added via sacrifice at linebacker, where only two players line up. That can create some extra space over the middle of the field for passing routes.

Reduces Speed - A 5-2 defense usually sacrifices speed for size, which could allow a speedier, quicker offense to take advantage and move the ball successfully down field. 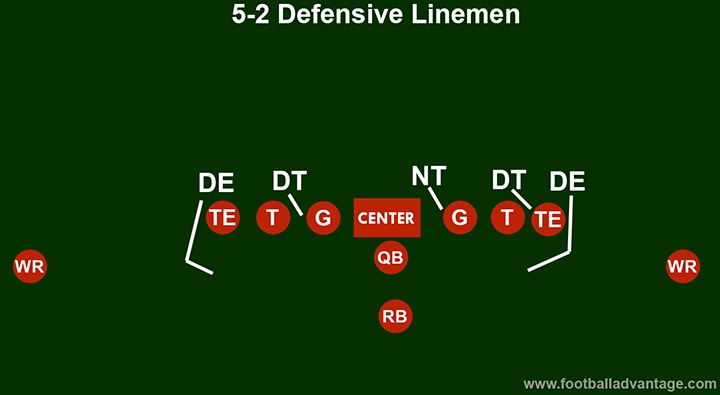 Under this formation, each offensive lineman has a player lined up across from him, or at least right next to him, on every play.

The nose tackle’s job is to clog up the middle of the field, taking on A gap responsibilities on any given play.

Most times, the nose tackle will line up over the center shaded toward the strong side of the offense.

In these cases, the nose tackle will be responsible for attacking the A gap on that side of the field, and hopefully occupying not only the center but also the strong side guard.

With this extra defensive lineman in a 5-2, the defensive tackles and defensive ends are able to line up wider than they normally would.

If an offense has two tight ends on the field, which it often does against a 5-2, the defensive tackles will line up either heads up to the offensive tackles or on their outside shoulder.

The defensive tackles will have primary responsibility for the C gap in this case.

If there is only one tight end on the field, the defensive tackle on the weak side of the defense will line up on the outside shoulder of the guard and attack the B gap on that side of the field.

The defensive tackle on the strong side will stay in the previous alignment and have C gap responsibilities.

The defensive ends will line up on the outside shoulder of the last man on the line of scrimmage on his side of the field, no matter who that last player is, whether it’s a tight end or an offensive tackle.

The defensive ends’ responsibility is the same on every play:

Cause disruption in the backfield by bursting through the outside of the offensive line. 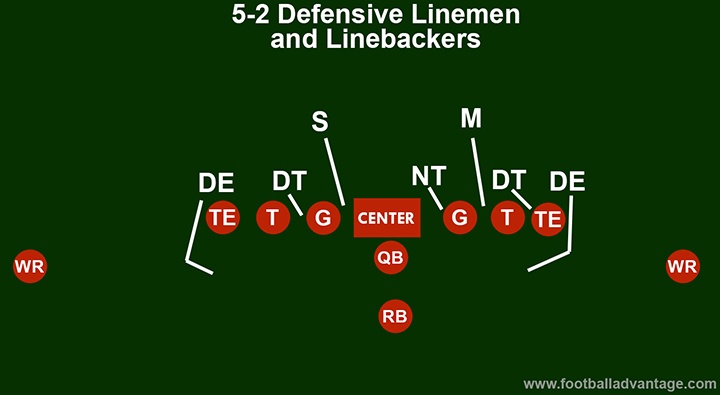 The two linebackers in a 5-2 defense are both considered inside linebackers.

They will operate in tandem very similar to how the inside linebackers in 3-4 defense will operate.

One of these linebackers will be considered the Mike (the quarterback of the defense who calls out the plays) while the other could be considered a sort of hybrid between a Sam and a Will.

Both these linebackers will line up somewhere between the nose tackle and defensive tackle on his side of the field.

They will either have A gap or B gap responsibilities depending on which gap the nose tackle is responsible for on that play.

On running plays, both linebackers will attack the line of scrimmage head on to fill their gap, or slide outside to help with tackling if the play goes that way.

Against a passing play, both linebackers will matchup against either a tight end or running back in a man-to-man defense.

In a zone defense, the linebackers will be asked to cover a specific zone on the field, either close to where they line up in a Cover 2 or Cover 4, or directly behind them in a Cover 3.

Linebackers are often asked to blitz against the pass out of a 5-2 defense, though.

That’s because even with one of the linebackers blitzing, there are still five other defenders on the field to matchup against any player on offense who runs a passing route. 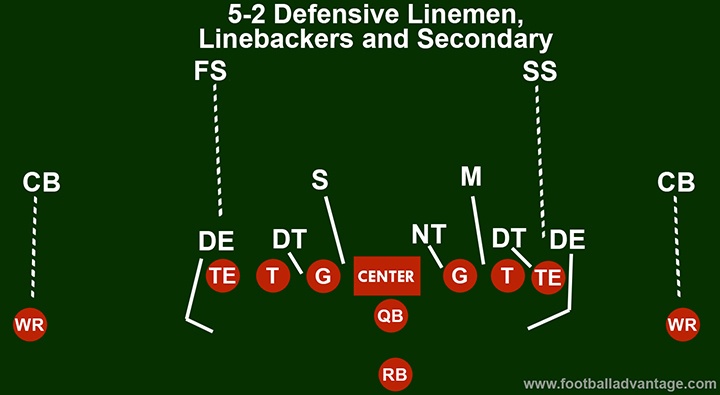 The secondary in a 5-3 defense has all its normal players on the field – two cornerbacks, a strong safety and a free safety.

Responsibilities for these players can be very simple in base man-to-man or zone defensive plays.

A defensive coach can decide to run any of the main zone coverages out of a 5-2 (Cover 2, Cover 3, Cover 4, etc.) because he will have these four players at his disposal.

In a man-to-man coverage, the cornerbacks will each cover a wide receiver.

Smart defensive coaches will also utilize both the safeties and cornerbacks in blitz packages out of a 5-2 defense as well.

If a cornerback blitzes, it’s easy for one of the safeties to come from over top and cover the man or zone that the cornerback vacated.

If a safety blitzes, a linebacker can often pick up on that player’s normal coverage responsibility. That’s what makes the 5-2 still effective against the pass.

Run responsibilities are much more straightforward…

Cornerbacks should funnel all ball carries to the middle of the field, while the safeties should approach the line of scrimmage and have final contain responsibilities, not allowing any ball carrier to get behind him.

​The 5-2 defense is a great option for coaches at any level of football.

It’s not just for youth football teams anymore, as astute coaches have begun to work in new wrinkles.

Such as having the defensive ends operate as a standing outside linebacker or having the free safety or strong safety approach the line of scrimmage before the snap of the ball to create even more pressure and confusion.

The 5-2 defense also allows for a blitz to come from just about anywhere on the field, and it’s very challenging for offensive linemen and even running backs to pick up this extra pressure with five down defensive linemen.

Even if you don’t want to run intricate packages or blitz schemes out of the 5-2 defense, it’s still a great alignment to run.

It puts a “hat on a hat,” as they say, creating a lot of pressure at the point of attack and making it difficult for offensive linemen to break free and block at the second level of a defense.

And because no player in the secondary has been sacrificed for this extra defensive lineman, the 5-2 defense can still hold its own against the pass.