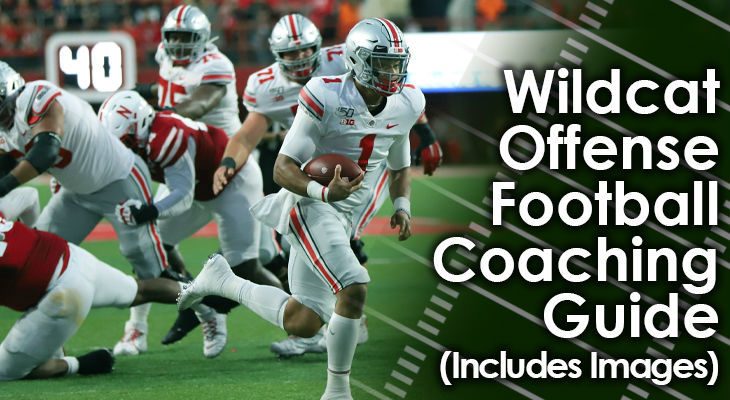 The Wildcat Offense burst onto the professional scene about 10 years ago.

The Miami Dolphins were playing the vaunted New England Patriots in 2008, and running back Ronnie Brown lined up as the quarterback, running all sorts of misdirection and confusion plays to keep the Patriots’ solid defense guessing.

What was so different about the offensive formation, though, was not just that Brown was the quarterback, but that regular quarterback Chad Pennington split out wide as a wide receiver, with the team’s other star running back (Ricky Williams) out wide as well.

On any given play, Brown could either run the ball himself, pitch it to Pennington who could throw it, hand it off to Williams on a sweep or even throw the ball himself.

The offense worked that game.

The Dolphins gained 300 yards and scored four touchdowns on only 12 plays.

The Wildcat was so eye-opening that NFL teams around the league started implementing a version of it quickly.

While many people think the Wildcat offense was a fad, it based a lot of its principles off an old-school Single-Wing offense, which had a running back playing the role of quarterback.

The Wildcat isn’t around much at all in the professional game anymore, but it’s still alive and well in college and even some youth levels of football.

Because the Wildcat offense is a great wrinkle that many teams can run to great success since it’s very hard for defenses to plan for in advance.

Who Should Use the Wildcat Offense?

Teams That Have a Running Back Who Can Throw - Unlike the Single-Wing offense, the running back who will take the snap from the center should have a good enough arm to throw the ball every once in a while. He won’t throw the ball even half the time, but the best Wildcat offenses are those that at least present the threat of a pass.

Teams That Have Good Runners - In addition to the running back who takes the snap, another running back will be split out wide and will take the handoff a lot. That’s why it’s essentially that a team that wants to run the Wildcat have at least two really good ball carriers.

Teams That Have Power Blocking Linemen - The Wildcat is run heavy, even if it is less so than the Single-Wing. As such, it’s important that offensive linemen are able to run block really well, including having some of the linemen with the ability to pull.

Who Should Not Use the Wildcat Offense?

Teams With a Solid Quarterback - Teams with really good quarterbacks might not want to run the Wildcat offense, at least not on every play. That’s because while the quarterback will be on the field for Wildcat plays, he won’t often do more than serve as a decoy.

Teams That Prefer to Pass - Along these same lines, teams that are stronger at passing than running probably won’t be a great fit for the Wildcat. The Wildcat doesn’t employ a lot of wide receivers, and the tight end is often used as a blocker.

Teams That Don’t Have Speed - Slower teams won’t do well with a Wildcat offense. Not only will skill players go in motion and run all over the field, but offensive linemen will be asked to pull often as well.

The basic Wildcat offense will use the same personnel on the field for every play.

One of the reasons the Wildcat offense is so deceptive is because the personnel is very similar to that of a more traditional offense such as a Pro Style offense.

Here is the more traditional personnel in a Wildcat offense:

The formation is where the deception in the Wildcat offense comes into play.

Not only will players line up in much different positions than when they normally line up, but the offensive line will be imbalanced as well.

The standard formation for all Wildcat plays are:

Center: Will line up in his normal position.

Guards: Both will line up in their normal positions, on either side of the center.

Tight End: Will line up in the normal position for the other offensive tackle, next to the guard on the other side of the center.

Wingback: Will line up about two yards in the backfield, between the two offensive tackles.

Halfback 1: Will line up in the shotgun formation, about five yards back behind the center.

Halfback 2: Will line up about two yards in the backfield, but split out wide on the weak side of the field, on the same side of the center as the tight end.

X Wide Receiver: Will line up in the slot split out to the right, about one yard off the line of scrimmage.

Quarterback: Will line up split out wide near the sideline, at the line of scrimmage, in the normal spot of a traditional wide receiver.

Understanding how the Wildcat offense works can really only be done by breaking down a few of the different running plays that are most often employed out of the offense.

For the purposes of this article, we’ll talk about a straight run from the Halfback and also a misdirection running play. 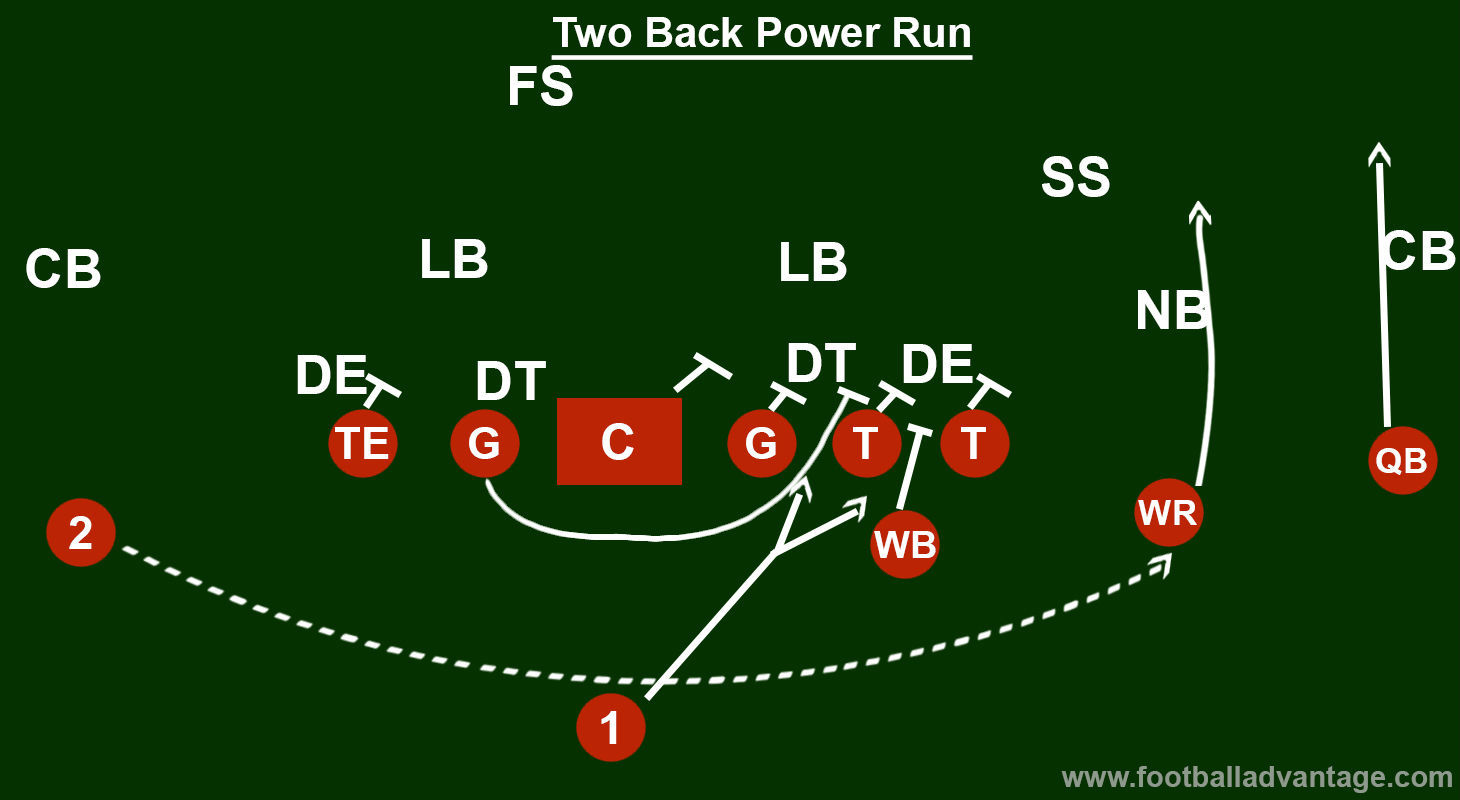 The idea of this Wildcat play is to load the offensive players up on the right side of the field, and then overpower the defense on that side by running the ball in that direction.

The offensive line will line up in their normal Wildcat positions, with the unbalanced line and two tackles on the right side of the field.

At the snap, each player along the offensive line will have the responsibility for blocking down to his right, pushing defensive linemen upfield as much as possible.

The only exception to this is the weak-side offensive guard, who will pull behind the center and guard, turning upfield in the B gap on the strong side of the field.

His responsibility is to pick up the first defensive threat he sees.

The wingback will hesitate at the snap slightly to give the offensive linemen a few minutes to open up some holes.

He will then run forward through the C gap, serving as the lead blocker if the Halfback decides to carry the ball behind him.

At the snap, the X will run a fly route straight down the field as a decoy passing option.

He will hopefully take a cornerback with him, and maybe even attract some attention from the strong safety.

Like the X, the quarterback will run a fly route to hopefully open up some running room on the outside of the field.

The halfback split out wide will start the play in motion by sprinting toward the position right in front of the Halfback 1.

When the ball snaps, he will could take the handoff from the other halfback, and run it toward the outside of the offense.

If he does not get the handoff, he will take a fake and run in the same direction to trick defenders into thinking he has the ball.

The halfback lined up in shotgun will take the snap directly from the center.

He will quickly survey the field and make the decision as to whether it would be better to hand the ball off the halfback 2 to run outside, or hang onto it and run it himself inside.

If he hangs onto the ball, he will look for a hole created by one of his two lead blockers – either the pulling guard through the B gap or the wingback through the C gap. 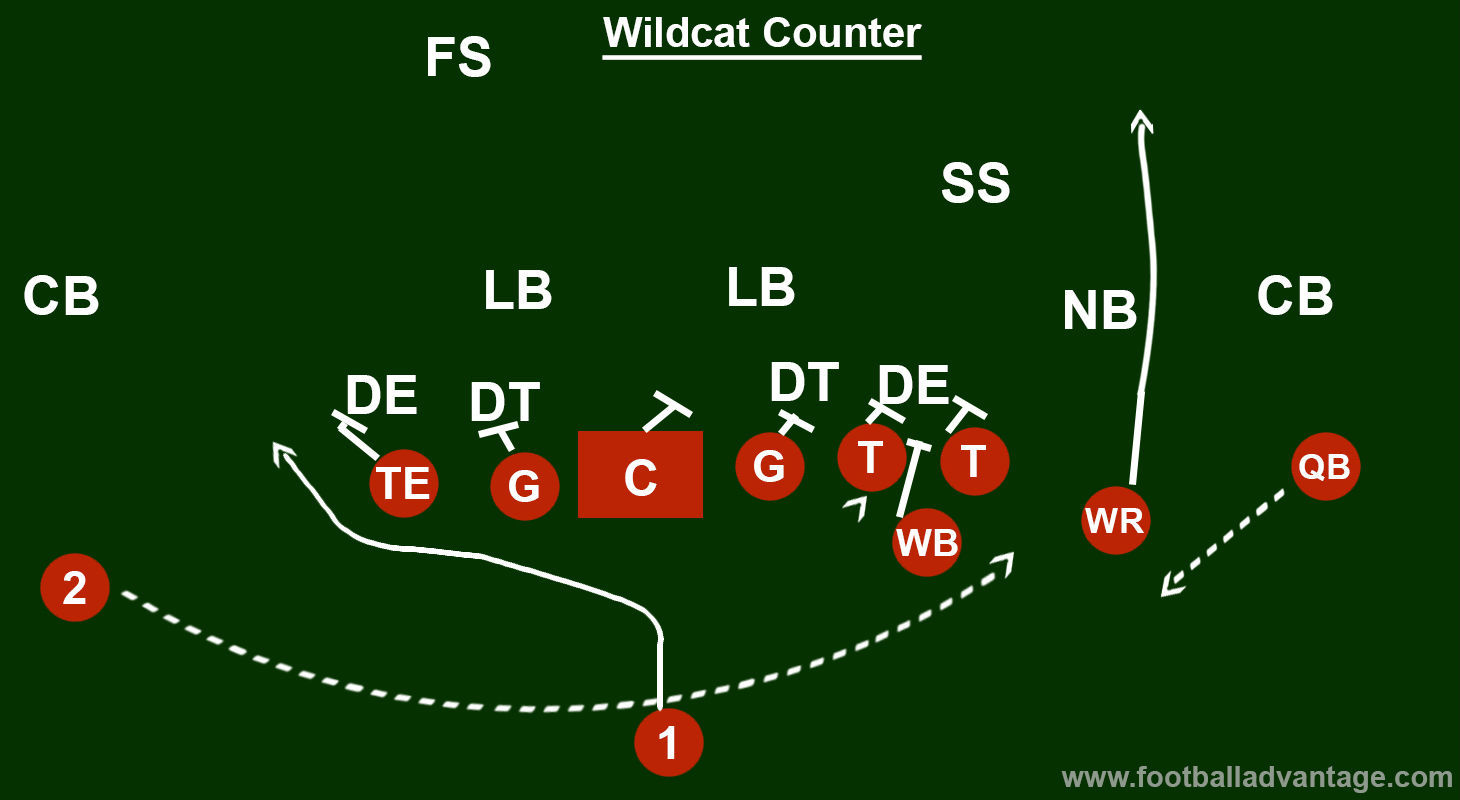 The idea of this play is to load up the right side of the field with personnel, like the other run, but to create confusion with the defense three different ways.

And the third way is by having the halfback 1 run the ball to the weak side of the field.

The offensive linemen will all line up in their normal Wildcat positions, with the unbalanced line of two offensive tackles on the right side of the field.

At the snap of the ball, all the linemen will block down toward the right side of the field.

No offensive linemen will pull on this play.

One of the keys to this play is having the tight end hook the defensive end and seal him off from the outside of the field.

The wingback will again line up about two yards in the backfield, between the two offensive tackles.

Like the last play, he will hesitate for a minute and then run through the C gap to block.

This time, however, he will really only be a decoy, as the play will be run to the other side of the field.

The X will line up in the slot as before, about a yard off the line of scrimmage to the right side of the field.

Just like the last play, he will run a fly route to take at least the cornerback lined up opposite him deep, and possibly even attract some attention from the safety.

The quarterback will once again line up out wide near the right sideline at the line of scrimmage.

At the snap, he will run backward on a diagonal toward the halfback 1.

He will stop around where the X lined up.

The quarterback will face the halfback 1 to fake that he will be thrown a screen pass, and then he will also fake as if he is going to take a pitch from the halfback 2 who will be running his way.

The 2 will again line up wide to the left, about two yards off the line of scrimmage.

Before the snap, he will go in motion with a hard sprint toward the halfback 1.

He will fake that he is taking the handoff and run to the outside of the offensive line, perhaps even faking that he is going to pitch the ball back to the quarterback.

The halfback will line up in shotgun again, about five yards deep directly behind the center.

He will take the snap from the center and first fake the handoff to the halfback 2.

If he has time, he will then fake a pass to the quarterback before quickly pulling the ball down and running toward the weak side of the field, on the outside shoulder of the tight end.

The Wildcat offense is all about deception.

While it uses traditional personnel to that of a more familiar offense such as the Pro Style, the trickery comes in the formation as well as how each play is run.

In order for an offense to be successful with a Wildcat, it must have a multi-talented halfback who can act as the leader of the offense to take the snap, make reads to determine whether to hand it off or run it himself, and also be able to throw the football from time to time.

The Wildcat offense isn’t for every team, and most teams who do run the Wildcat don’t do it on every play.

Indeed, most teams that do run the Wildcat only do it every now and then as a way to switch things up and hopefully gain big yardage when the defense might be expecting a more traditional play.