What is a Sluggo Route in Football? (Full Explanation) 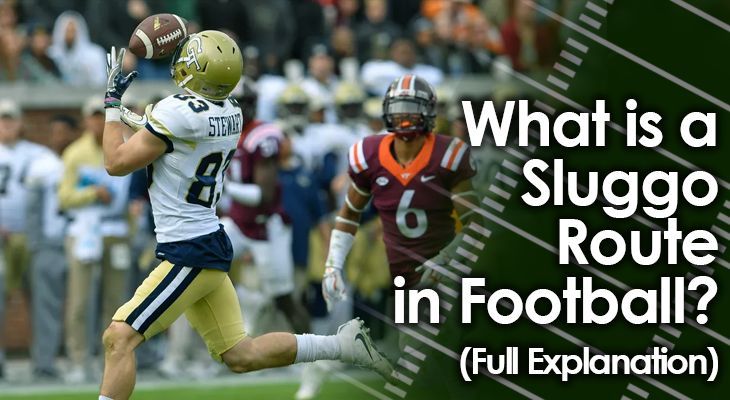 The Sluggo route is a slightly more complicated passing route than the nine basic routes that are in the route tree.

That's because the Sluggo route is what's known as a “combination route”.

In essence, the Sluggo is a combination of two of the passing routes in the route tree -- the Slant route and the Go route.

The name Sluggo is just how the two routes would sound if you mashed the two words together -- the "SL" from the Slant and the "Go," with the vowel "u" added in the middle to sound good.

The Sluggo, like all the other combination routes, should typically only be taught to players once they have mastered the basic routes in the route tree.

If the players aren't able to master the basic routes, then it'll be difficult for them to perfect a combination of two of these routes.

All the combination routes are designed to confuse the defense and result in a big play.

Let's take an in-depth look at what the Sluggo route is, why it's called that, and how to run it.

The Design of a Sluggo Route 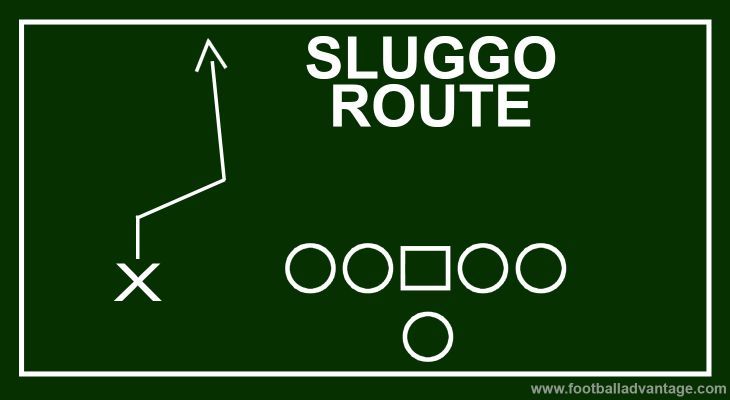 All combination routes are also sometimes referred to as "double move" routes, since they consist of the receiver making two moves.

The first half of the Sluggo route is the Slant. The player will first run the Slant route, and then change and end the route with a Go route.

The Sluggo is designed to make the defense think the route is going to be a Slant route.

The defenders will hopefully then adjust themselves to cover a route in the middle of the field at a mid-range yardage.

Just as the defender is adjusting to the middle of the field, the receiver will break off into the Go portion of the route and attack the defense deep.

Unlike straight Go routes, the Sluggo will attack the deep part of the defense in a different way.

With a Go route, there is no deception... it's simply a straight-ahead route that's meant to force defenders to run with a speedy receiver downfield.

The Sluggo, instead, is meant to attack the defense deep by using deception.

This is a great way that the offense can have a receiver who may not typically run a straight Go route attack deep.

Receivers with not as much speed, but who are great route runners, can use the Sluggo to create separation deep with their cutting skills rather than their straight speed.

The Sluggo route is often run in combination with other shorter routes run by the other receivers.

A wide receiver on the other side of the field may run an Out or Hitch route, for example, to make the defense think that the offense is running a shorter passing play.

This design of the Sluggo, when used with other shorter passing routes, is meant specifically to deceive the safeties.

If the safeties read short passing play, they will likely approach the line of scrimmage, which could give the receiver running the Sluggo a step on them as he breaks off the route into a deep play.

How to Run the Sluggo Route

The receiver running the Sluggo must fully sell the Slant portion of the route before breaking it off into the Go portion.

If he isn't able to do that, then the entire design of the route as a deception will be lost.

This means he has to run the route as if he would run a normal Slant route, with full force.

At the snap, the receiver will take a few steps forward and then turn his body to slant his route toward the middle of the field.

He'll use his outside foot to plant and push off so that he can get a good amount of power and speed behind the diagonal direction he'll be taking.

When he gets about halfway through what would be a typical Slant route, the receiver will break it off and complete with a Go route.

To do this, he'll need to plant his inside foot, so that he can push off.

He'll want to plant hard so that he can get a good push to start the sprint.

The receiver will want to take a straight-line sprint straight downfield toward the end zone. He doesn't want to angle toward one of the corners.

He can, however, fade or curl slightly to the inside or outside, depending on what side of the body the closest defender is on.

This will help him create some extra separation.

Once he begins the Go portion of the route, he should be expecting the quarterback to throw him the ball.

This means he needs to make sure he's gaining separation from the defender, and he's looking back toward the backfield to see if the ball is being thrown his way.

If it is, he'll want to track the ball through the air as he continues to run full speed downfield. 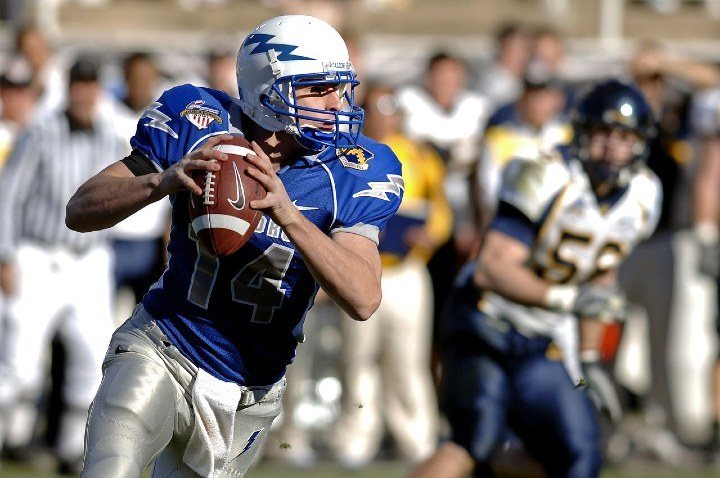 The Sluggo route is one of the combination routes that receivers are taught.

This is something that coaches will teach their players after they are able to master the nine basic routes in the route tree.

The Sluggo entails running both a Slant route and a Go route in the same play.

The receiver will start by running a Slant but then break it off to finish with a Go.

It's a route designed to deceive the defense into thinking it will be a short route over the middle, only to attack them deep over the top.