5 Offensive Line Drills to Keep the QB Safe and Protected 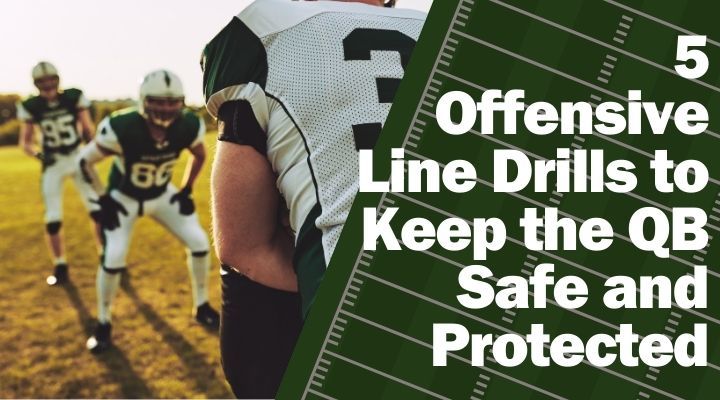 The big boys upfront on the offensive line will often dictate how successful a football team's offense is.

The quarterback and other skill position players get a lot of the credit, but none of what they do would be possible if the offensive line didn't perform well.

The offensive line has the fairly straightforward responsibility of protecting the skill players on the team.

This includes opening up holes for the running game and keeping the quarterback enough time to throw on passing plays.

Their only real job is to block defendeposrs who are looking to attack and get to either the quarterback or other ball carriers.

While all of their responsibilities can be whittled down to one simple word (block), it's not an easy task at all.

Being a successful offensive lineman takes way more than just being big and strong.

An offensive lineman must have quick feet, quick hands, and great vision.

They must have the ability to keep an eye out for oncoming defenders who are looking to attack. And they often must do it while they’re physically engaged with a big-bodied defensive lineman or linebacker.

Offensive linemen have the tall task of blocking exceptionally big, strong, and fast defensive linemen who are trying to cause as much disruption at the line of scrimmage as possible.

They’re constantly engaged in hard physical contact, and they must absorb that contact every single time they're on the field.

To be successful requires much more than just brute strength and force, though. They must be light on their feet, mobile, and agile.

Some offensive linemen will pull from their positions to the opposite side of the field, and they must be relatively fast to do that well.

The old saying is that you can't teach size; either a player has the physical stature necessary to play the position, or they don't.

However, coaches play a crucial role in teaching offensive linemen who have the proper size how to use it effectively to be outstanding football players.

There are various offensive line drills that coaches have at their disposal to teach players how to use their size to their advantage and how to build strength, speed, and stamina.

These offensive line drills will teach players effective blocking methods and tricks of the trade to help them protect the skill players on their offense. 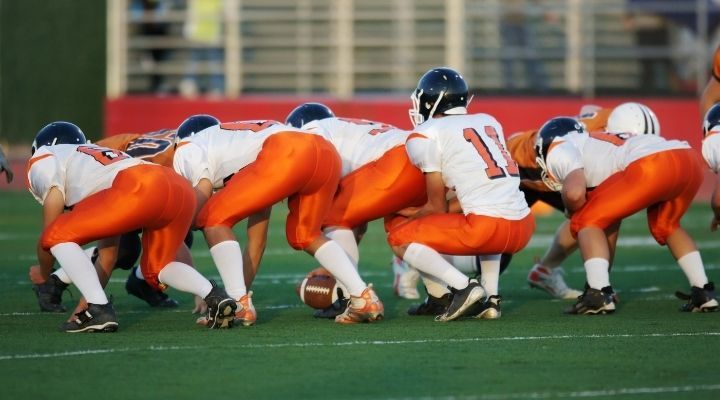 A proper stance is key to the success of any offensive lineman. It sets the tone for the rest of the play.

A good stance puts the lineman in position to have good balance right from the beginning and gives them the ability to explode with the power they'll need to knock a defender off course.

That's why teaching the proper stance is the first drill any coach should teach offensive linemen.

The most common stance offensive linemen will use is called a three-point stance.

In this stance, the linemen will have their two feet on the ground as well as one hand touching the ground.

There are some basics of teaching the proper stance.

Linemen should begin by having their feet separated at shoulder width. They should then place their dominant foot slightly back from their other foot.

The toe on the dominant foot should line up with the heel of the other foot.

The lineman should crouch down by sinking their hips. They then should put their elbows on their thighs.

The off-hand should be stuck out in front of them, with their elbow slightly bent.

They should keep their back straight and their head up while in their stance. They need to make sure not to put too much weight on their down hand.

If this happens, they'll have an unbalanced stance that’ll make it hard for them to keep their head up.

The proper stance is something that should be taught and reinforced consistently throughout practice.

It's not something that should be installed once and then ignored as you move on to more advanced offensive line drills.

The first contact an offensive lineman makes with a defender is crucial.

By dealing an effective first blow, an offensive lineman can knock the defender off-balance and gain leverage over him through the rest of the block.

This Set and Punch drill will teach offensive linemen how to deal a powerful first blow.

The drill starts by having a coach or teammate line up across from an offensive lineman with a bag.

The offensive lineman will start in his normal three-point stance, while the coach with the bag will line up over either his right or left shoulder.

To start the drill, the lineman will kick out his leg and slide his body over toward the coach with the bag.

If the coach is over his right shoulder, for example, the lineman will kick out his right leg and slide to that side.

In the same motion, he'll deliver a punch to the middle of the bag. The punch should be delivered with the palm.

The lineman needs to keep his elbows tight and his thumbs up.

While he’s delivering this punch, he needs to keep his chest up and have a wide stance with his feet.

The idea behind this drill is to teach that first blow by showing the importance of not just the upper body, but the lower body and core.

Without a wide stance, a chest that's up, and a strong slide kick out, the punch will never be able to be delivered with enough power to knock the defender off balance.

You can adjust this drill by having the coach switch to the other shoulder after the lineman has mastered the Set and Punch to the one side.

A more advanced version of this drill would be called a continuous set.

As the lineman punches one bag, that coach should step back a step or two.

The lineman will then continue to alternate from left bag to right bag as he moves his way downfield.

This will help teach the skill of blocking downfield and constant contact. 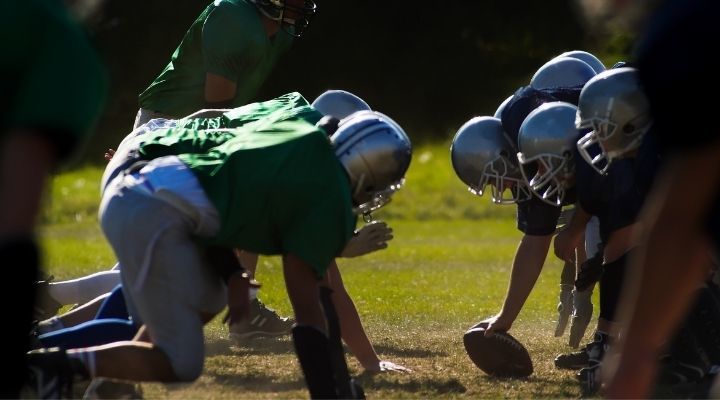 An offensive lineman won't always be able to block straight ahead of him.

Defenders will obviously be moving from side to side to try to avoid his block, especially on passing plays.

This drill will help linemen work on their lateral movements.

To start this drill, set up two cones roughly five yards apart from each other.

The lineman should start at one of the cones in a two-point stance, while a teammate or coach will line up at the other cone.

When the whistle is blown, the defender will move from side to side to side. The lineman must mirror his moves to remain in front of him.

The defender will have the ability to move in whatever direction he wants to try to trick the offensive lineman.

The coach will blow the whistle again to signal the end of the drill.

This drill helps to teach linemen the importance of keeping a wide base with their knees bent as they move from side to side.

They also should be told that they need to keep their hands up near their chest and their elbows tight the entire time, as they prepare for contact.

To take this drill to the next level, the defender can have the ability to try to rush past the offensive lineman.

To do this, he can employ whatever moves he feels necessary -- spins, jukes, and bullrushes to name a few.

The offensive lineman's job will be to mirror the defender, and then engage with him and keep him from getting behind him when the rush happens.

Coaches should teach offensive linemen not to lunge at the defender, waiting to engage in contact when they get closer.

If they lunge, it makes them susceptible to a juke or fake by the defender, who could then more easily run by him.

Another key to being a successful blocker is keeping a low base and driving forward into and through blocks while staying low.

One of the most effective offensive line drills at teaching this is the barrel drill.

For this drill, you'll need a barrel or a rather large trash can.

The lineman should line up in a three-point stance directly opposite the barrel, which will serve as a defensive lineman in this case.

When the coach blows the whistle, the lineman's job is to fire out of his stance and "fit up" on the barrel.

The goal is to have the lineman slide the barrel back off the line of scrimmage without having it topple over.

If the barrel is knocked to the ground, it means the lineman has hit the barrel too high up.

He needs to focus on staying low as he explodes out of his stance so that he hits the barrel in the middle to bottom half so that it slides back and doesn't topple over.

Linemen need to make sure that they spread out their base and also keep their hips low as they approach the barrel.

While doing so, they need to also focus on keeping the center of gravity directly under them and not shifting it too much to either side, to the back, or to the front.

One way to advance the drill a bit is to call out which side the lineman should proceed to after hitting the barrel.

The coach can blow the whistle and then yell "left" or "right." The lineman will then hit the barrel to whatever side the coach calls out. 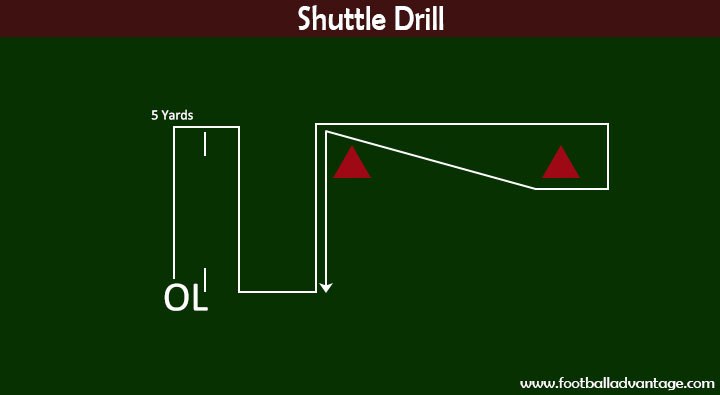 Offensive linemen need to learn how to properly shift from side to side and back to front in quick succession.

They'll need to constantly be shifting directions as they block, and shifting weight properly while engaged in contact is essential.

The Shuttle drill will teach them how to do just this.

The coach will blow a whistle to signal the start of the drill.

When this happens, the player should sprint forward five yards, turn around and sprint five yards back to the starting point.

He'll then turn around and sprint forward to the cone and loop around it to the right.

The player will next run around the far cone to the right, loop back around the first cone, and then sprint back to starting line to finish the full shuttle.

This will teach linemen how to make adjustments while proceeding quickly to and around specific points.

If you want to make this drill a little more complicated, you can have the offensive linemen touch the cones as they pass them.

This will force them to remember to keep low to the ground throughout the entire drill -- whether they're sprinting, looping around a cone, or turning to go in a different direction.

There are a lot of offensive line drills that can help teach all positions of the offensive line the basic skills needed to master their specific role.

Every coach should begin teaching the position by ensuring the players have a proper stance, as nothing can really proceed if that isn't mastered first.

Once the players have the proper stance down, then they can work on extra drills to teach them how to explode out of their stance, keep low to the ground, knock defenders off balance, and make adjustments as they run.