What is a Drag Route in Football? (Full Explanation) 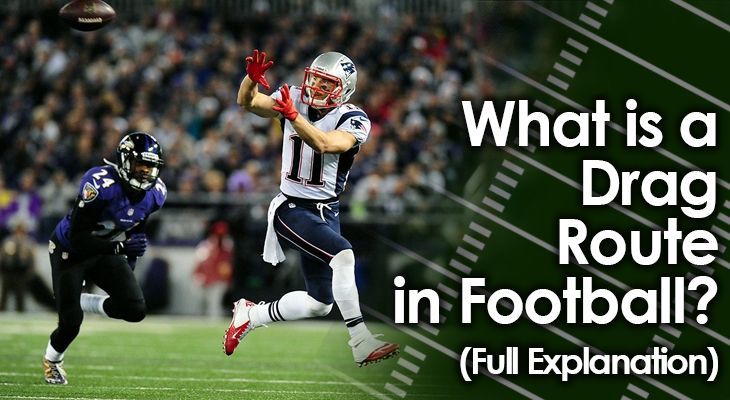 The "route tree" is the term used to describe the nine basic passing routes that every receiver is taught in football.

They are the most common routes that a receiver will run, and they have proven to be extremely effective over the years.

Once those routes have been learned, though, there are slight adjustments that can be made to them to create entirely new routes altogether.

Some of these other routes are "combo" or "double move" routes.

They start with one route on the route tree, then finish with a second route.

Some others use the same principles of the routes on the tree, with a minor adjustment to achieve a slightly different outcome.

One route that fits into this description is the Drag Route.

The Drag is similar to the Slant route. Instead of requiring the receiver to make a quick cut at a sharp angle, though, the Drag will have the receiver take a more rounded turn toward the middle of the field.

The Drag route is rather simple to learn, but there are nuances to running it.

Let's take an in-depth look at what the Drag route is, why it's called that and how to run it.

The Design of a Drag Route The Drag route is a short route over the middle of the field, much like a quick Slant route.

In some ways, it's similar to a Slant in the way the receiver will break toward the middle of the field after taking only a step or two forward off the line of scrimmage.

In some ways, it's also similar to a Dig route, in that the direction the receiver will run is more of a straight line from sideline to sideline rather than a diagonal direction.

The drag route is a long-developing route. Oftentimes, the receiver will run nearly the entire width of the field to complete the route.

In doing so, the receiver will be running through a lot of traffic in the middle, which hopefully causes the defender to lose track of him -- whether the defense is running a man-to-man or zone coverage scheme.

The reason the Drag route works is precisely because of this traffic.

The receiver running a Drag can either line up in the slot or further outside.

While he won't get much depth on his route, he will run a lot from sideline to sideline. On his way, he'll be avoiding linebackers and other members of the secondary to complete the route.

The hope is that by the end of the route, he will break free of defenders. The quarterback can then dump the ball off to him and let him run in the open field.

Smart offensive coaches will often clear out the side of the field where the Drag route is being run.

For example, if the receiver running a Drag lines up on the left, then the routes called for the receivers on the right will end up away from the right side of the field.

In a four-wide-receiver alignment with two receivers on each side of the field, for example, the receivers on the right may run a Slant (for the slot receiver) and a Deep Dig route (for the outside receiver).

This will clear defenders out of the right side of the field for the receiver running the Drag.

If everything works out according to plan, the receiver running the Drag will have plenty of room to run after he makes the catch.

How to Run the Drag Route

The Drag route is one that requires some deception, some elusiveness, and a lot of speed.

At the snap, the receiver should take a few quick steps forward. Then, he should attempt to juke the defender, as he would in a Slant route.

He'll then turn toward the middle of the field and start running straight down the line of scrimmage, a few yards deep.

Unlike a Slant, though, he should round off his cut. It's a more gradual cut toward the middle than a Slant, in essence.

Once the receiver has made the cut toward the middle, he should run at full speed directly toward the other sideline in a straight line.

While doing so, he needs to keep his eyes not just on the quarterback, but also on the players who are likely to be stationed in the middle of the field.

He'll often need to avoid contact with linebackers, cornerbacks, safeties and maybe even his own teammates as he's running across the middle.

He obviously should avoid this contact and sprint as fast as he can all the way to the other side of the field.

If this receiver is to be the quarterback's intended target, he can expect to be thrown the ball around the hashmark on the opposite side of the field from where he lined up.

This will give the quarterback enough space to lead him with the pass a little, which will allow him to have a lot of momentum.

The goal of the Drag route is not just to complete a pass for short yardage.

While the route itself isn't run very deep downfield, it's a play that's designed to gain significant yardage.

Instead of doing so with a long pass, though, it will rely on the receiver gaining a lot of yards after the catch.

Once the receiver catches the ball, then, he should immediately turn upfield and run toward the open space that should hopefully have been created by complementary passing routes. The Drag route is not one of the basic passing routes on the route tree.

However, it's often one of the first alternate routes that is taught to football players after they master the nine basic ones.

The Drag route is very simple to learn.

It's a slightly different route to a Slant, in that the cut a receiver will make toward the middle will be more rounded than a Slant.

The end path will also be much longer and straight down the line of scrimmage than the diagonal direction of a Slant.

When used in combination with complementary routes on the other side of the field, the Drag route can be very effective at gaining big yardage on what is otherwise a short passing play.