What is a Corner Route in Football? (Full Explanation)

The Corner route is one of the nine basic passing routes in football that make up what's known as the Route Tree.

It's a route that all receivers are eventually taught so that they can attack a different section on the field.

The Corner route is meant to attack the defense deeper down the field.

This route is designed to be run further downfield, with the second part of the route happening after 10 or 15 yards (as we'll soon see).

The Corner route is very easy to teach, even though it includes parts.

At the same time, it does take some work in practice for receivers to perfect.

The key is running it effectively so that the receiver not only gets open but makes himself a good target for the quarterback to throw to.

Let's take an in-depth look at what the Corner route is, why it's called that, and how to run it.

The Design of a Corner Route 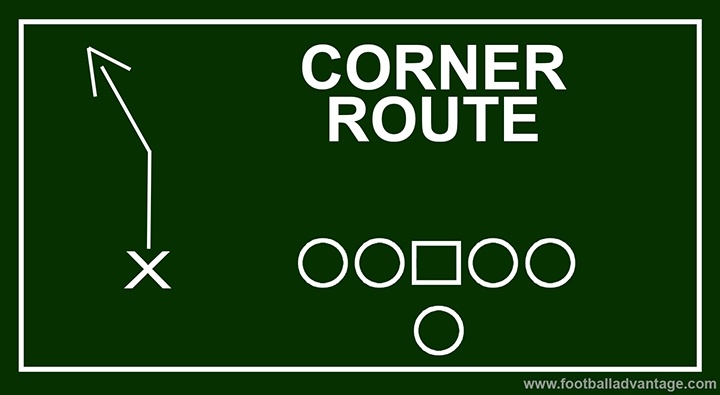 The Corner route is one of the three passing routes on the Route Tree that is designed to attack the deeper part of the field.

As the name suggests, it's a route that is eventually run toward one corner of the end zone.

It's a route that can be run by just about every eligible receiver on the field. It works well when called for outside wide receivers, inside slot wide receivers, tight ends and even running backs, in certain situations.

The design of the Corner route is to put pressure on the defense deep.

Against man-to-man coverage, it's designed to make defenders backpedal a lot and then turn and run with the receiver for a long time.

Against zone coverage, it's meant to attack the safeties and force them to run a long distance to keep up with the receiver.

Passes that are completed to a receiver running a Corner route will oftentimes result in a big play.

It could either mean significant yardage gained for the offense, or even a touchdown.

The secondary purpose of the Corner route is to clear out the middle of the field for other receivers to roam.

If, for example, two receivers are asked to run Corner routes on each side of the field, it'll likely clear at least two (if not four) defenders from the middle of the field.

The best combination for offensive coaches is to call other mid-range routes for other receivers that attack the middle of the field.

This could include quick Slant routes and Dig routes.

If done properly in tandem, there could be plenty of space in the middle of the field for a pass completion. 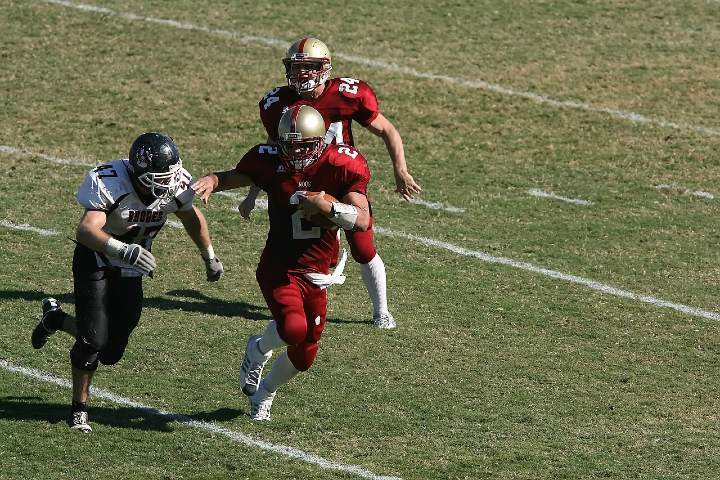 How to Run the Corner Route

The Corner route has two parts to it.

It's similar to both a Go route (which runs straight down field) and a Slant route (which asks the receiver to run on a diagonal toward the sideline).

In the huddle when the quarterback calls the play, a receiver who is to run a Corner route will know how many yards downfield he's going to run before making his cut.

At the snap, he'll sprint straight forward to this predetermined distance (most often either 10 or 15 yards).

When he gets to that point, he will cut off the Go portion of the route and start the Slant-like portion.

To do this, he'll need to plant with his inside foot and push off with it. He'll then take his diagonal path toward the corner of the end zone.

This part is similar to a Slant in that it will end with the receiver running in diagonal toward the sideline.

The difference, though, is the receiver shouldn't take as sharp of a cut as he would with a Slant.

Instead, he should take a path that still allows him to gain depth on his route.

A Slant, by contrast, isn't meant to be run as deep. This means the receiver will take a sharper angle when he starts his diagonal path.

The Corner, meanwhile, won't be as sharp.

The receiver should aim to take a 45-degree angle toward the corner of the end zone so that he can still be getting significant depth on his route.

The key to a successful Corner route is making the defender think you're running a Go route straight to the end zone.

The turning point in the route is, of course, when the receiver breaks the route off a bit and angles on a diagonal route.

The idea is that the receiver will be able to create separation once he makes his cut.

It's important, therefore, that the receiver doesn't telegraph this cut before he takes it.

He can even make a quick juke to make the defender think he's going to cut toward the middle of the field, or even cut off the route completely to stop in his tracks.

The Corner route is one of the basic passing routes that are taught to receivers.

It can be quite the devastating route if executed properly, as it's a deep route that can result in a lot of yards gained.

At the same time, it's a route that can clear the middle of the field for other receivers who are running shorter routes.

The Corner route is very easy to teach and to understand.

However, like many skills in football, it's one that players need to constantly practice so they can be perfect.